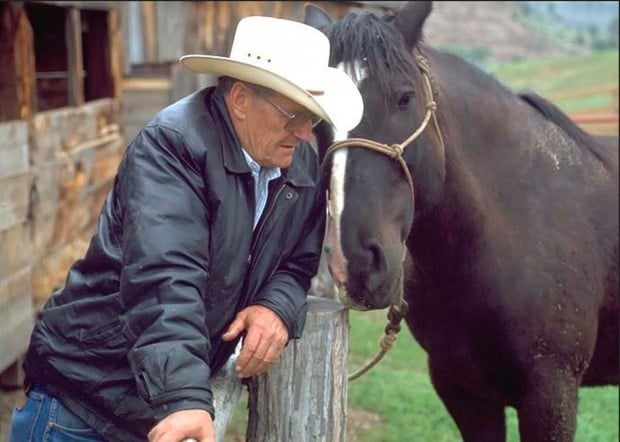 Dayton O. Hyde is the founder of the Black Hills Wild Horse Sanctuary. His story is told in "Running Wild." 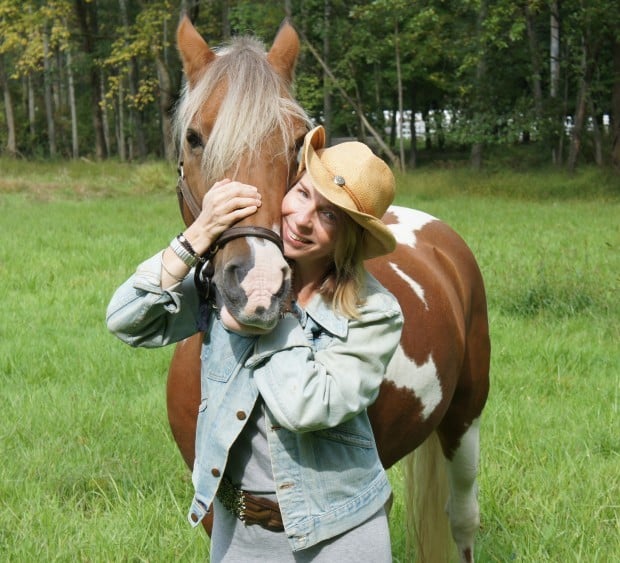 Wild horses thunder across Dayton O. Hyde's 11,000-acre sanctuary in the Black Hills, the pounding of their hooves mixing with the delicate twitter of songbirds and the stunning vistas of the Cheyenne River.

That scene, coupled with Hyde's passion for wildlife and the West, captivated filmmaker Suzanne Mitchell back in 1992. Now, more than 20 years later, the story of the 6-foot-5 cowboy, award-winning author and conservationist is on the screen in a new documentary, "Running Wild: The Life of Dayton O. Hyde."

The film will air twice during next week's Black Hills Film Festival.

"This film will wake everybody's senses up and make all South Dakotans appreciate what they have," Mitchell said.

"Running Wild" tells the story of Hyde's rich, diverse life and how he came to provide a safe haven for more than 500 mustangs rescued from overpopulated herds on government lands. It features footage of the Black Hills Wild Horse Sanctuary south of Hot Springs and Hyde's Yamsi Ranch in Oregon's Klamath Basin.

"It's a beautiful movie, in spite of the fact that I'm in it," said Hyde, 88. "My philosophy has always been rather than dominion over wildlife, we have a responsibility for wildlife and water and our fellow travelers. I think that message is certainly there."

The film is the directorial debut of Emmy Award winner Mitchell and is executive-produced by two-time Academy Award winner Barbara Kopple. It's been playing at festivals around the country and will be released in theaters this fall.

Mitchell first met Hyde in 1992 when she was filming a People magazine special for ABC. She had seen a story about Hyde in the magazine and convinced ABC to use it in the special. After filming Hyde for five days, she knew that his story was worth more than a two-minute piece for TV.

But it wasn't until 2002 when she visited Hyde and his family that she sprang into action, realizing that if the movie was her dream, she had to get started, even if she had to finance it herself.

Mitchell filmed Hyde and the horses over 10 years, in between her other projects. The time frame ended up working in her favor. Hyde was invited to take part in a Lakota naming ceremony to recognize him as a protector of sacred land, a scene that never would have been captured had she finished the film earlier. And the high-definition cameras that were developed during those years made it more affordable to film.

"Sticking it out that long really made for a richer film," said Mitchell, who noted that filming wild horses could be challenging. "To get those shots, it was weather dependent, horse dependent. You needed to spend at least a week every time you went out to shoot. You're rolling all the time and hopefully you're catching something."

The 92-minute film showcases the beauty of the wild horses and the land they now roam freely, but also serves as a testament to Hyde's perseverance and the need to protect the environment, Mitchell said.

"He's a man who never gave up on his dream," she said. "It proves that at any age, if you want to go out and do something, you better do it. And if it means giving back to our planet, that's even better."

Although Mitchell thought she was going to do a simple story on a man and his horses, it became much more, she said.

Hyde left home at 13 and caught a freight train to his uncle's cattle ranch in Oregon, where he learned the ways of the cowboy. He served in World War II, staged rodeos in France for the troops, graduated from the University of California-Berkeley's English program and wrote award-winning books on the preservation of coyotes and sandhill cranes.

"He has all the brawn of a cowboy, but he has all the nuances of a poet and literary giant. And then he becomes a Life magazine photographer. And he raises a family on a huge cattle ranch in Oregon," Mitchell said. "His life is so rich in so many ways."

In 1987, he reinvented himself again when he started the sanctuary. He was buying cattle in Nevada for his ranch in Oregon when he saw government holding corrals with horses that had just been captured.

"They were a sad lot, in captivity. I knew I could instantly help them, so I turned the ranch over to the family and took off for South Dakota and Oklahoma, where there was plenty of grass," he said.

The late Gov. George S. Mickelson convinced him to open the sanctuary south of Hot Springs.

"It's been a long trip, 25 years. I've enjoyed every bit of it, the people and the land. We get in probably 10,000 tourists every year," he said. "It's an idea that's working. Everybody thought it would be a failure, but it's been a success."

"Running Wild" has gotten a positive response from audiences around the country. This month, it won the Sarasota Film Festival Audience Award for best documentary feature. Last month, it was named audience favorite at the Cinequest Film Festival. It also has appeared at the Slamdance Film Festival and Palm Beach International Film Festival.

"They're overwhelmed by the sensitivity of it and the beauty," Hyde said of audiences. "And I think that there's a good message that a dedicated person can do an awful lot."

The original soundtrack is special, too, Mitchell said.

Singer-songwriter Steve Poltz, who is opening for singer Jewel on her upcoming concert tour, will be releasing an album featuring the singles "Song for Hawk" and "I Pray It Never Comes to This" from the soundtrack. Mitchell said Poltz will be at the Black Hills Film Festival and will perform a song from the film at a VIP reception at Prairie Berry Winery on Friday, May 3.

"He's definitely a notable musician," Mitchell said. "He's doing this because he loves Dayton so much."

What: "Running Wild: The Life of Dayton O. Hyde"

The screenings are part of the Black Hills Film Festival; for festival passes, go to www.blackhillsfilmfestival.org or call 574-9454. For more information on the movie, go to www.runningwildfilm.com.

Hot in the Hills

Wannabe filmmakers, industry professionals and movie fans who just want to see how a story makes it to the screen will be able to mix and ming…

Dayton O. Hyde is the founder of the Black Hills Wild Horse Sanctuary. His story is told in "Running Wild."