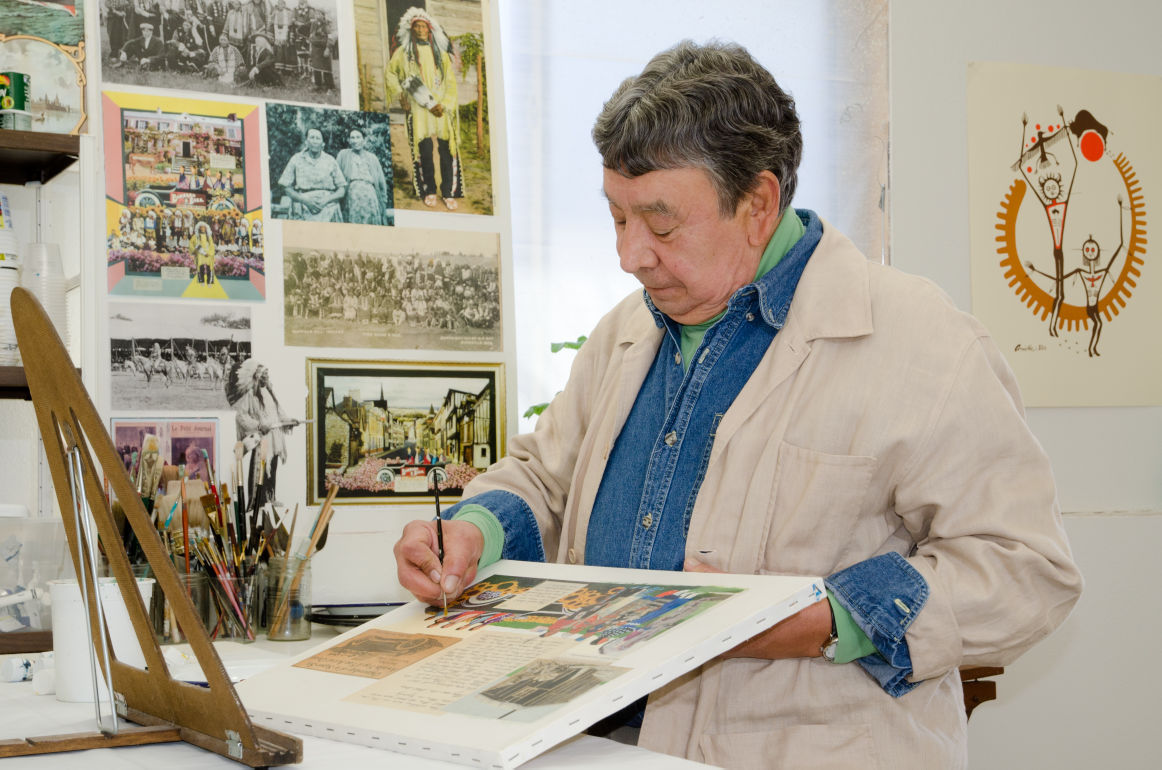 Arthur Amiotte's work will be on display at The Dahl Arts Center from Friday through Jan. 23. Amiotte describes the exhibit as his "swan song." 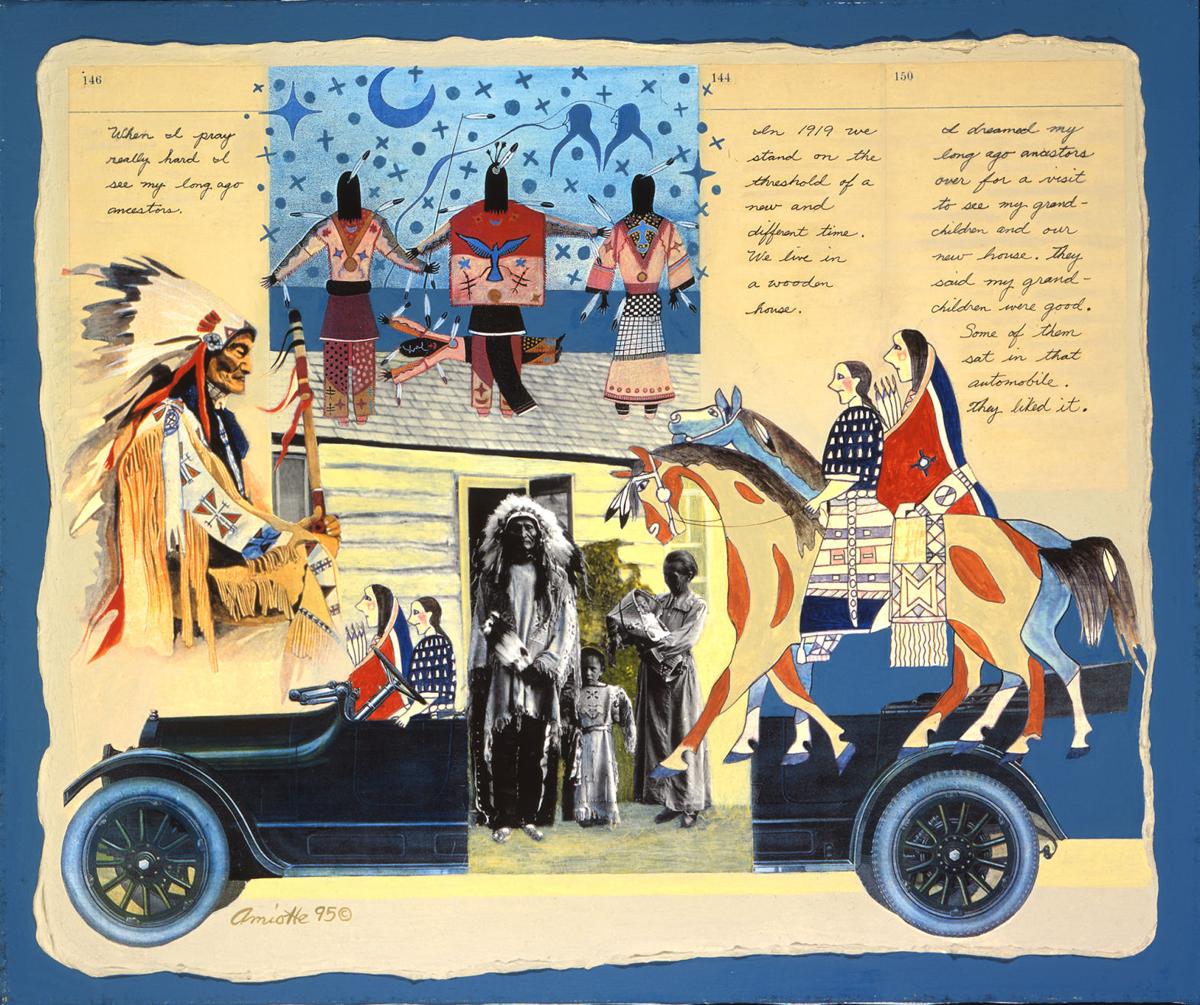 "The Visit" by Arthur Amiotte is one of the pieces on display at The Dahl Arts Center. 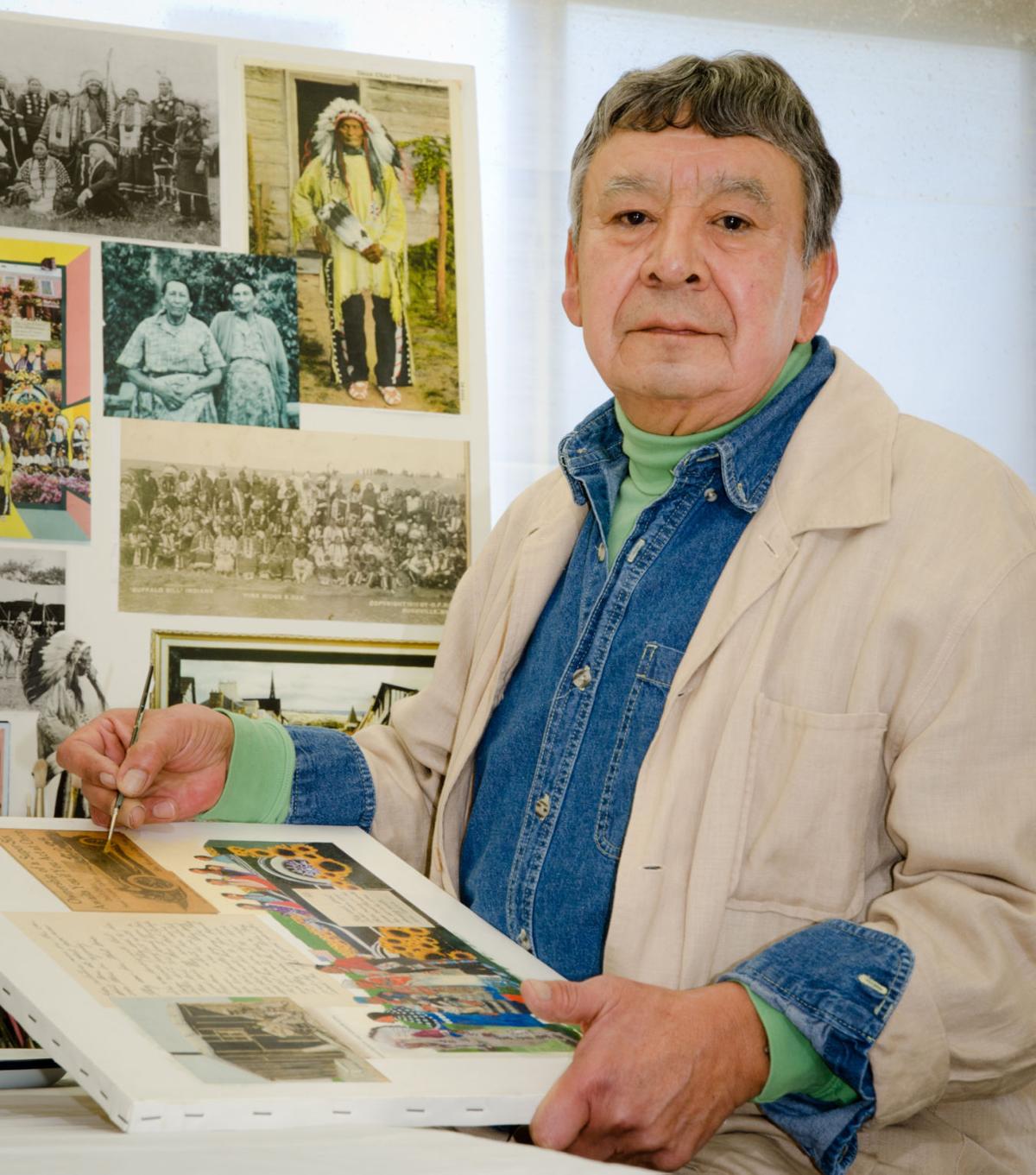 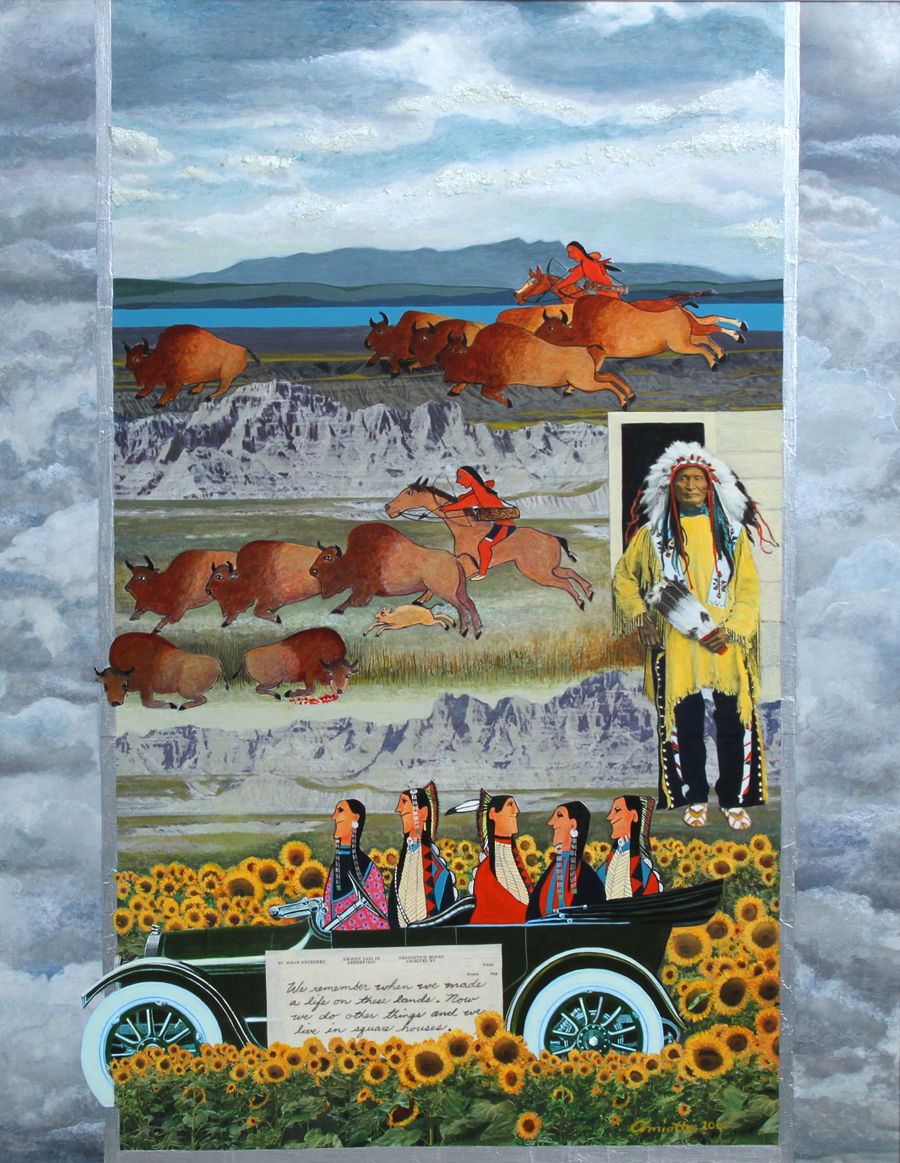 Arthur Amiotte's "We Made a Life" will be one of the collages on display at The Dahl Arts Center. 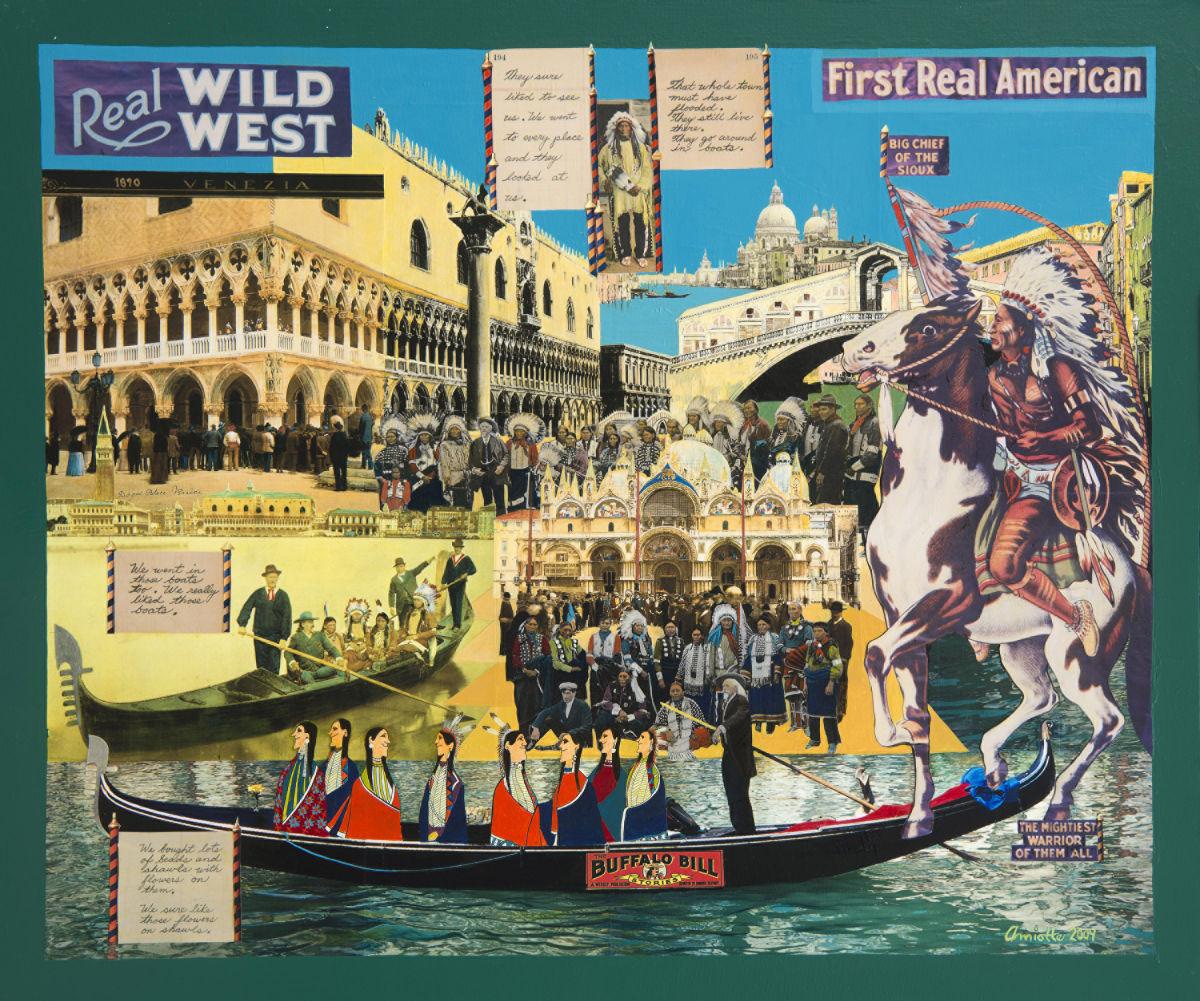 "Venizia 1890" by Arthur Amiotte is one of the many collages the artist has created over the past 26 years.

After two years of planning and preparation, the final exhibition of one of South Dakota's finest artists will make its way to Rapid City.

"Transformation and Continuity of Lakota Culture: The Collages of Arthur Amiotte, 1988-2014" will debut with an artists' reception 5 p.m. Friday at The Dahl Arts Center, 713 Seventh Street. It will remain in the Ruth Brennan Gallery until Jan. 23.

The exhibition will display 31 selections of Amiotte's most recent and most innovative period, along with a muslin painting by his grandfather, Standing Bear. It is the only comprehensive show of his collages and is, according to Amiotte, his swan song.

"This is the first and last time that people interested in my art can see the entire span of my career in collages," Amiotte said. "I'm quite elderly now, and do not produce many works, so I do imagine it will be my swan song."

Amiotte's work has been displayed across the United States and in Europe. He has received an Artist of the Year Award from the South Dakota Hall of Fame (1997), a Bush Leader Fellowship (1980-1983), and an Enduring Vision Award of the Bush Artist Program (2010-2013), the last of which culminated in this exhibit.

Curator Denise Du Broy said that The Dahl's team has planned this exhibition for two years as the exhibit has traveled around the country, from Santa Fe to the Heritage Center in Pierre.

"Many view Arthur as a national treasure, and rightly so," Du Broy said. "There's a very historical approach in his mixed media collages, and it creates a cultural biography for his people."

Du Broy refers to the collages that have made up the latter period of Amiotte's work. The artist's career spans five decades, starting with traditional Native artwork and painting highly influenced by Oscar Howe (under whom he studied) in the 1960s.

Amiotte eventually became fascinated with muslin and ledger book tradition and, starting in 1988, grew to incorporate them into collages that create a visual narrative of his family and his people from the early reservation period to the 1930s.

"I began working with a variety of historic materials that I found in antique magazines from the late 19th century," Amiotte said. "It struck me that the story of the transition from plains life, buffalo hunting and reservation dwelling, to adapting to European-American society had not been told."

Amiotte has used the past 26 years, then, to use collages as a form of visual storytelling, of Native Americans adapting to new technologies, and of his own family's history, including his great-grandfather's time performing as a part of Buffalo Bill's Circus in Europe.

Amiotte says that he applies fine arts composition techniques to arrange his materials into their final form, making sure he distributes certain colors, lines and textures in a way that is compositionally balanced. It's a time-consuming process, but Amiotte says he finds it fulfulling.

"In addition to being an artist, I'm a scholar and researcher," Amiotte said. "I gather materials from antique bookstores because I want my work to be in congruence with the time period I'm portraying."

Amiotte has worked as a scholar and professor of cultural arts, and said that he has tried to make his work reflect the "enigma" of the progression of Native American life.

"Very few people have reflected on it," Amiotte said. "My people underwent these adaptations and changes, and yet they retained and maintained their languages, sacred traditions, values, art forms while other things disappeared."

Du Broy said that she found something optimistic in that cultural history through art.

"These reflections are not bitter," Du Broy said. "He believes that transition is a triumph, of how the Lakota people are able to walk in both worlds."

Amiotte's work, then, will be a grand statement for that idea.

"We've adapted, but it has not been total," Amiotte said. "We have not forsaken the most treasured aspects of our heritage."

WHAT: "Transformation and Continuity of Lakota Culture: The Collages of Arthur Amiotte, 1988-2014"

Arthur Amiotte's work will be on display at The Dahl Arts Center from Friday through Jan. 23. Amiotte describes the exhibit as his "swan song."

"The Visit" by Arthur Amiotte is one of the pieces on display at The Dahl Arts Center.

Arthur Amiotte's "We Made a Life" will be one of the collages on display at The Dahl Arts Center.

"Venizia 1890" by Arthur Amiotte is one of the many collages the artist has created over the past 26 years.