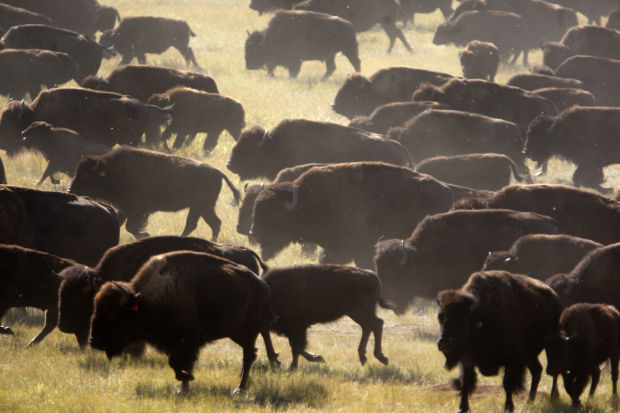 The famed buffalo that make Custer State Park their home are the stars of the show and will be featured in a new $500,000 film the park will use to highlight its offerings. 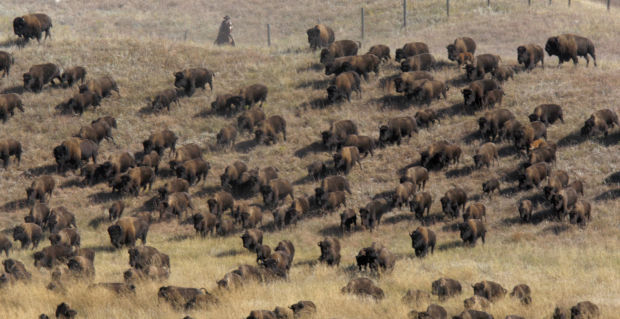 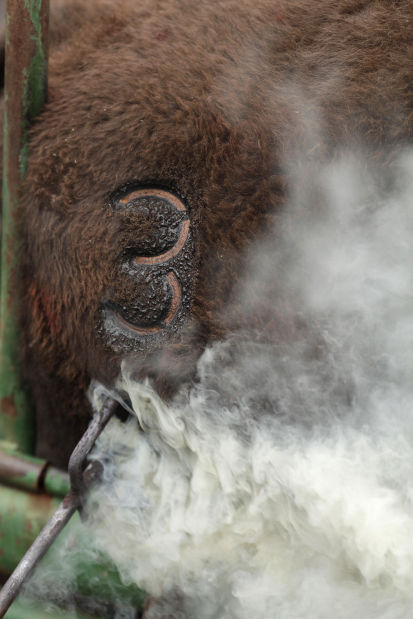 After the buffalo are rounded up, they are sorted, branded and tested. Each year about 300 of the 1,300 buffalo are deemed surplus and are auctioned off.

CUSTER STATE PARK | On Friday morning, in a scene torn from the tattered pages of the Old West, South Dakota’s own thundering herd will surge across the prairie, hooves pounding, in a display unlike any other in the world.

Traced to its trailhead, the 50th anniversary of the Custer State Park Buffalo Roundup is as wild as any in the West, providing a spectacle for thousands of visitors and local while allowing this 71,000-acre preserve to cull the herd, manage the grasslands, and generate revenues that support the park.

As the event reaches the half-century mark, it's a good time to look back at how it all began.

According to park Visitor Services Coordinator Craig Puglsey, today’s herd of 1,200 to 1,500 American bison is largely credited to the foresight of four men who helped save the buffalo from extinction.

Known as the "Patriarch of the Plains," the American bison once blackened the landscape with as many as 60 million of the beasts grazing the grasslands of the Great Plains. In the journals of their Corps of Discovery, Lewis and Clark wrote of riding horseback for two days just to pass one herd of buffalo.

But, over-hunting and the federal government’s policy to eliminate the traveling commissary on which many Native American tribes subsisted, reduced the population of bison to such a precariously low number that by the late 1800s the animal was in danger of extinction.

Fred and Pete Dupree captured five buffalo calves along South Dakota’s Grand River during one of the last buffalo hunts in 1881. The Duprees brought them home and raised them on their ranch, and the herd eventually grew to 83 head, Pugsley said.

When Pete Dupree died in 1901, Fort Pierre-area rancher Scotty Philip purchased the entire herd, then drove them all back to his ranch in one of the first buffalo roundups. Finally, there was then-Lt. Gov. Peter Norbeck, who purchased 36 head of bison from Philip in 1914 to establish the herd in the Southern Hills in what would become Custer State Park in 1919, Pugsley explained.

By the 1930s, it was evident that growing herds of buffalo and elk in Custer State Park eventually would have to be dealt with.

“From 1930 to 1940, it was clear we had way too many buffalo, way too many elk and even some horses running around,” said Gary Brundige, park resource program manager. “They had eaten everything down to the dirt and made a mess of things.”

As park managers began to understand the “carrying capacity” of the 110-square-mile preserve, they began conducting sporadic roundups, allowing them to cull the herds, Brundige explained. In 1959, the Fred Matthews Buffalo Corrals were constructed in the southeast corner of the park and by 1966, the buffalo herd was certified brucellosis-free and the Buffalo Roundup and accompanying live auction became an annual affair, he said.

“That’s where it all started,” Brundige said.

The event, for a half-century an autumn Black Hills ritual as regular as falling leaves, has been used as a park management tool, he said. Using horses and pick-up trucks, park staff and volunteers push the entire herd into holding pens and corrals, then systematically work the animals through chutes where they are branded and vaccinated.

Because the park has a limited carrying capacity, several hundred bison are culled and sold at public auction, this year slated for Nov. 21, Brundige said. In the past the proceeds, which are used to support the park, have ranged from $83,000 to more than $1 million.

“The Buffalo Roundup really started to gain in popularity with the release of the movie, 'Dances with Wolves,' said Pugsley, a veteran of 38 roundups. “That really rekindled the interest in the Wild West and cowboys and buffalo, the iconic symbols of the plains.

“Today, the Roundup is just a special experience for people from around the world,” he added. “It’s always a sight to behold 1,000 bison stampeding across the plains.”

For the past three Roundups, attendance has averaged about 14,000, Pugsley noted. And this year’s 50th anniversary has attracted international attention, including the distinction of being named one of Frommer’s Travel Guides top 10 “Don’t Miss” events of 2015, and the American Bus Association’s No. 1 pick for the year, he said.

As such Custer State Park staffers have prepared for an onslaught of spectators, doubling motorcoach parking and expanding viewing areas, he said.

But, beyond the spectacle and crowds of enthusiastic spectators, Puglsey and Brundige said the Roundup has generated a lasting legacy tied to conservation of resources and stewardship of the land, both of which honor the contributions of those four men credited with saving the bison from extinction and establishing Custer State Park’s herd so long ago.

“As a resource manager, this event is an excellent illustration of 50 years of sound management, a good strong program, as well as good stewardship of the land,” Brundige said.

“Custer State Park has played a pivotal role in establishing bison herds across the United States and into Canada,” Pugsley added. “It’s one of the feathers in the park’s cap. We’ve helped bison to the point today where they are no longer endangered.”

Welcome to this special 50th annual Buffalo Roundup edition of Black Hills to Go, produced by the Rapid City Journal.

Buffalo hunted near extinction in 1800s

For thousands of years, huge herds of buffalo roamed North America, from the upper reaches of the continent down through Mexico. They were a d…

The famed buffalo that make Custer State Park their home are the stars of the show and will be featured in a new $500,000 film the park will use to highlight its offerings.

After the buffalo are rounded up, they are sorted, branded and tested. Each year about 300 of the 1,300 buffalo are deemed surplus and are auctioned off.