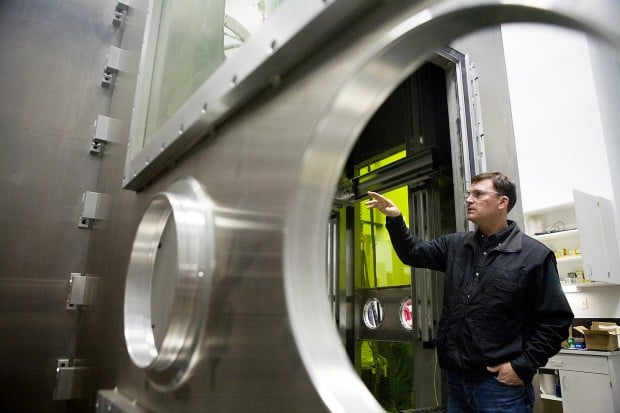 Kristina Barker/Journal staff Rob Mudge, president of RPM & Associates, explains the process of building a laser deposition technology system virtually from scratch. RPM has been developing ways to fix expensive military equipment at a fraction of the cost of replacement. The laser deposition technology system currently being built at RPM will be the second on site at its facility in Rapid City. 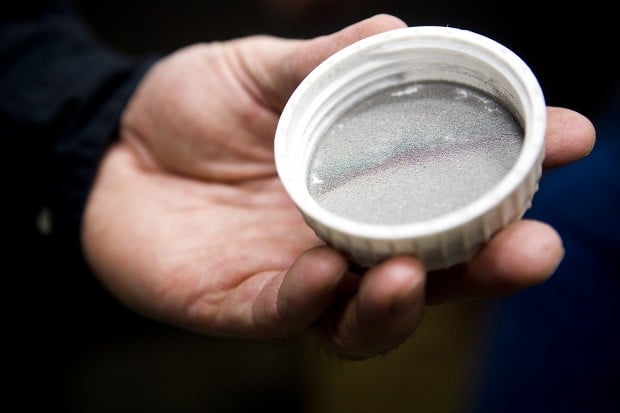 Rob Mudge and his staff have proven, to themselves at least, that they can fix expensive military equipment with a new technology combining lasers, powdered metal and computer files.

Now, Mudge is waiting for the Department of Defense to agree and give his firm, RPM & Associates of Rapid City, a contract.

Meanwhile, his firm, housed in the industrial park on Rapid City’s east side, has been awarded millions of dollars over the past eight years to further develop the laser technology begun at Sandia National Labs in           Albuquerque, N.M.

In the process, Mudge says, his young engineers have become the best in the world at what they do.

The military work has helped his firm grow, even in the midst of a national recession.

RPM had 17 employees, including two engineers (counting Mudge), seven years ago when it moved into its new 35,000-square-foot building on Concourse Drive. Now it employs 41 people, including 12 engineers, all of them, like Mudge, graduates of South Dakota School of Mines & Technology.

Since August 2008, while most companies have been downsizing, RPM has added a dozen employees.

Over the past 16 months, the company invested nearly $3 million in construction projects, engineering for a new building, and new equipment.

“When people say things are not going well, we don’t understand that,” Mudge said.

But RPM doesn’t depend only on military work. Its core business remains making and repairing equipment, such as scrubbers and coal pulverizers, for power plants around the country.

In 2001 Mines President Dick Gowen urged Mudge to get into laser deposition.

RPM, along with Mines and a Minnesota firm, then began requesting Department of Defense money to research the use of laser deposition technology, or LDT, to repair or fabricate military parts.

Here’s a vastly oversimplified explanation of how laser deposition works:

A laser beam is directed at a surface, such as a cracked part, generating a small molten pool of base material. Then a powdered metal is sprayed onto the surface, and the powder is absorbed into the melted pool, generating a tiny deposit, and creating a small weld bead.

The process is directed by a computer.

RPM has used the technology to demonstrate that it can repair parts such as a titanium bearing housing on turbine engines used in jet planes or helicopters. The housing costs $5,000. Fixing it with LDT costs $2,000, Mudge says.

Mudge and others say using new technologies such as laser deposition to repair parts is much cheaper than replacing them.

RPM has repaired parts or developed repairs made by other companies that are being used now on military equipment such as Humvees.

But extensive testing and a maze of bureaucratic hoops must be navigated before a company like RPM can actually get a contract to do mass repairs, Mudge says.

“It is extremely frustrating to see how our system is set up to not allow this new technology to come in,” Mudge said. “On the other side, if I’m the guy flying that jet, I want to know that there’s a whole bunch of people questioning this thing.”

But Mudge fully expects to land a contract.

Getting the technology to work at his own factory on Concourse Drive was also frustrating, Mudge said.

RPM used some of its government research money to purchase its own LDT system, which was delivered in 2004.

But it was two years before the manufacturer and Mudge’s own staff got the system to work consistently. Now that machinery is working 24 hours a day, seven days a week.

RPM has taken the lessons learned getting the bugs out of that system to build its own, larger system. Already, Mudge said, other companies are clamoring for the new equipment.

Mudge says his wife and business partner, Debbie Mudge, and their longtime production manager, Rob Stanton, have been crucial to bringing the laser deposition technology to maturity.

He also credits his team of young engineers, most of them Mines graduates, with developing a top-flight LDT system almost from scratch.

All are Mines grads and most are in their 20s.

Wald is the laser technology manager.

Dan Flynn and Steve Larsen are designing the software for the laser system.

Holdaway runs the mechanical end and the optics.

Fraser is the powder feeder guru.

Veurink is the engineering manager.

Jaron Volk, a nontraditional Mines student, is doing the computer wiring to run the robotics.

Mudge says his young engineers have built the best laser deposition system anywhere and are part of the reason he is optimistic about RPM’s future using laser technology for military applications.

PennyWise Episode 21: What child tax credits mean for your family

Jim Hutto is excited and enthusiastic as he shows visitors an aluminum plate that he says demonstrates why his company, H.F. Webster, can succeed.

PennyWise Episode 21: What child tax credits mean for your family

Kristina Barker/Journal staff Rob Mudge, president of RPM & Associates, explains the process of building a laser deposition technology system virtually from scratch. RPM has been developing ways to fix expensive military equipment at a fraction of the cost of replacement. The laser deposition technology system currently being built at RPM will be the second on site at its facility in Rapid City.