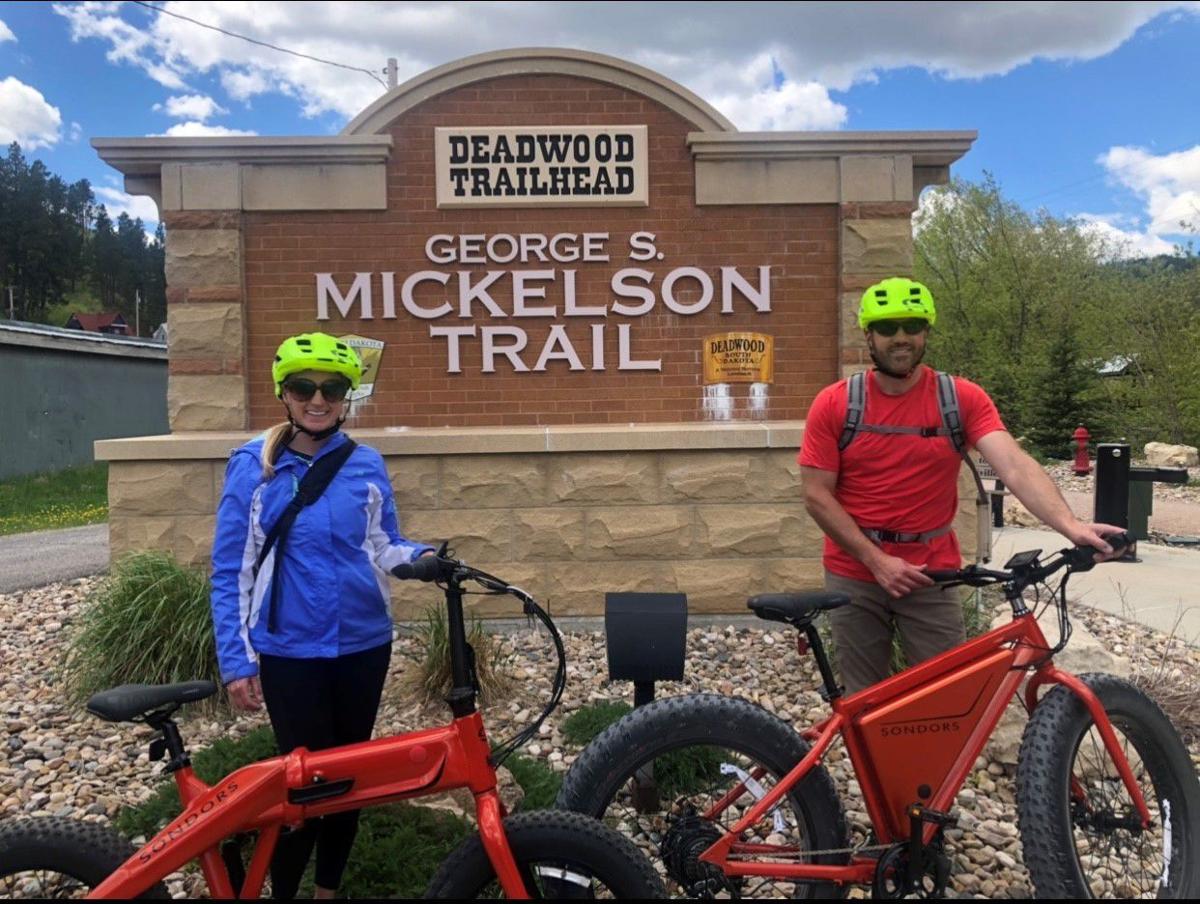 Ashley Holmgren and Jason Bryce stand at the Deadwood trailhead of the Mickelson Trail with e-bikes. Bryce is a co-owner of Gold Rush E-Bikes rental business, which is located near the trailhead in Deadwood. 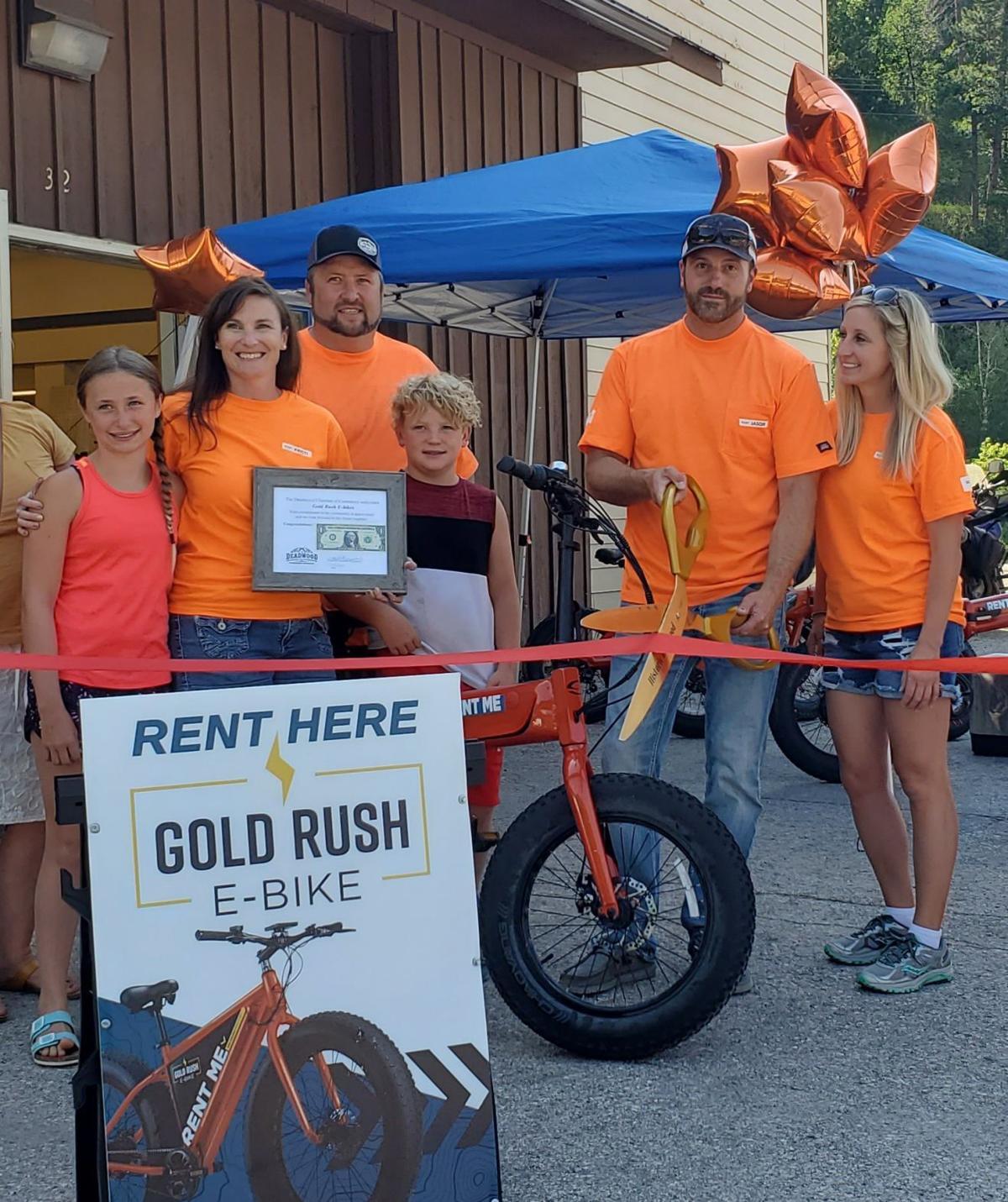 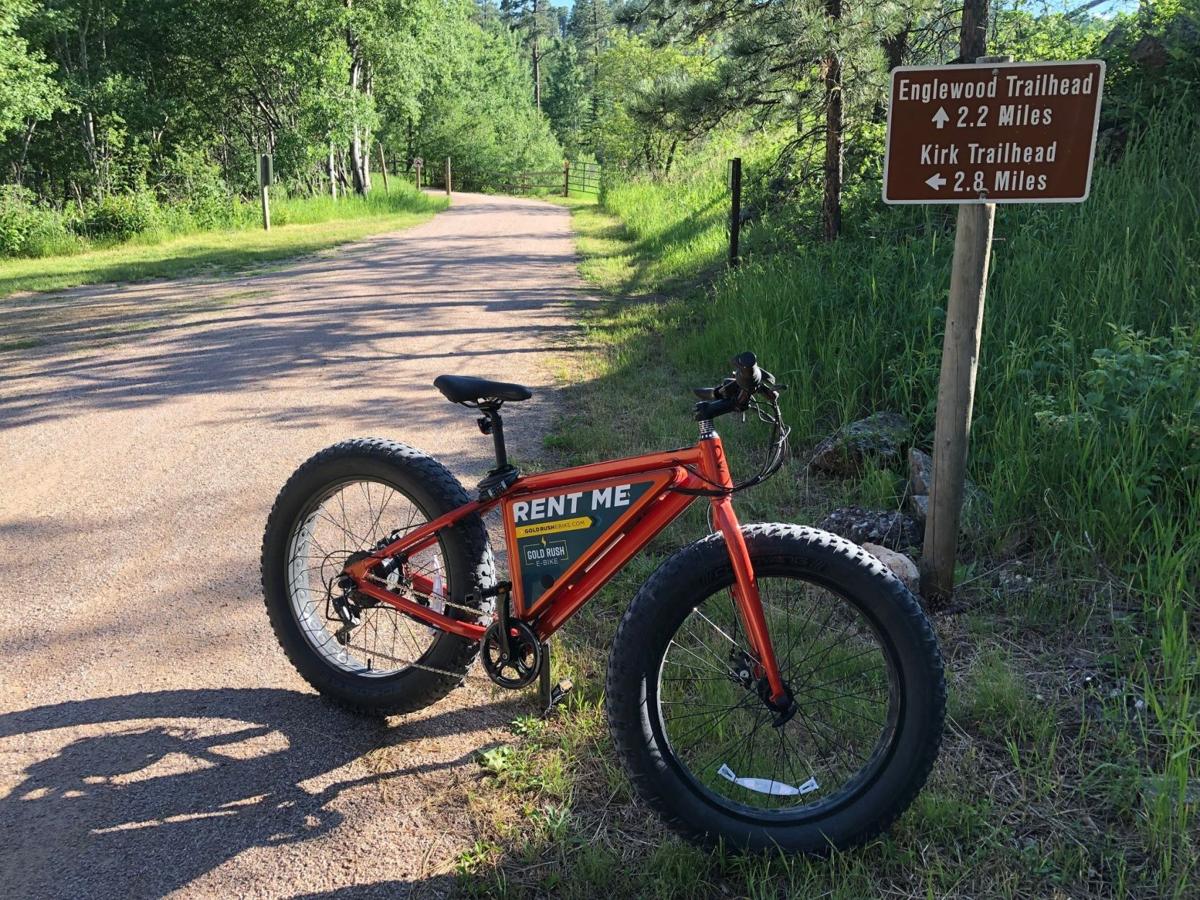 An e-bike from Gold Rush E-Bikes rental business sits on the Mickelson Trail. The battery-powered bikes allow people to explore the trail, particularly on inclines, farther and more easily than they might otherwise.

Explore the Black Hills in a new way this summer. Gold Rush E-Bikes, the region’s first e-bike rental business, hopes to get everyone outside having fun.

Gold Rush E-Bikes opened June 5 in Deadwood and celebrated its grand opening July 9. The shop is located at 32 Charles St., near the Deadwood trailhead of the Mickelson Trail. The seasonal business will be open through August.

E-bikes use rechargeable batteries that can assist cyclists as they pedal. Gold Rush E-Bikes rents three types of e-bikes that have five levels of pedal assistance. The e-bike’s motor creates energy so cyclists can choose whether they want more or less strenuous biking. E-bikes are intended for teen and adult users and rent for $25 to $45 an hour.

“When you take the e-bikes out, it’s a game changer,” said Kristi Sander, co-owner of Gold Rush E-Bikes. “You don’t get fatigued as much, and you can enjoy the scenery and look around. E-bikes significantly help with (inclines).”

E-bikes also make bicycling accessible to those who are restricted by fitness levels or physical impairments. Gold Rush rents a fourth type of e-bike, the Aventon Level, designed for people who are shorter or who have had knee replacements or other limitations that make biking difficult.

The idea to open an e-bike rental business was inspired by a vacation co-owner Jason Bryce took in Sedona, Ariz., in March. He and his girlfriend, Ashley Holmgren, rented e-bikes for the first time, loved their experience and wanted to bring it to the Black Hills.

“We’d never been e-bikers but we had been regular bikers. After about five miles of pedaling (a manually powered bike) you’re tired of it. With e-bikes, we rode 30 miles in two or two and a half hours. We had such a ball doing that,” Bryce said.

“When I got back from vacation, Ashley and I said the Black Hills needs this. We need access to beautiful scenery that’s beyond the main roads,” he said. “A lot of people haven’t experienced truly what an e-bike is and what it can do for you. It really makes you feel like a kid again.”

Bryce approached his friends Kristi and Kyle Sander about launching an e-bike rental business. Bryce is a nurse anesthetist at Monument Health Rapid City Hospital and Kristi is a sonographer at Dakota Radiology. Kyle teaches in the Rapid City Area Schools. He’s an avid hobby cyclist who’s knowledgeable about the mechanics of bicycles.

Though none of them has ever been in business before, Bryce and the Sanders all saw the benefits e-biking could bring to the region.

“The e-bikes, (Jason and Ashley) loved them. They rode them all day. The big thing that appealed is they were able to ride them around town where there wasn’t a lot of parking available,” Kristi said.

“We bought the e-bikes in May and opened in June,” Kristi said. “The availability to access Mickelson Trail with an e-bike is huge. The trail is gorgeous, and you can also ride around town. We’ve sent people up to Roosevelt Tower, and sometimes they just ride around Deadwood.”

“It’s something that came up and we found a perfect opportunity. The e-bikes are getting more popular,” she said. “It’s a great way to enjoy bicycling but to do it at a more enjoyable pace, and you can get farther without being tired.”

The combination of the high elevation in Deadwood, uneven terrain and the length of the 109-mile Mickelson Trail can be daunting, but not necessarily with an e-bike, Bryce said.

“Most people (riding regular bicycles) would peter out by the time they even get to the Mickelson Trail. We put people on e-bikes and they come back after riding 15 miles grinning from ear to ear,” Bryce said. “It’s so much fun.”

“The e-bikes opened up a lot of the Mickelson Trail to people who likely wouldn’t have seen the trail system on that northern side,” he said. “The back territory is truly what makes the Black Hills special. That’s where you really see the beauty.”

The Sanders and Bryce are excited by the positive reaction their new business is getting. Though a seasonal e-biking business would seem to cater mainly to tourists, Bryce said a lot of locals have been enjoying e-bikes. Many become so enthusiastic they want to buy their own.

“We’ve had a lot of people love it so much, and a lot of locals want to come out and ride in the fall when it’s beautiful, so we are looking at the possibility of being open on weekends into September and October,” Kristi said.

The Rushmore Mall is under new ownership and by early 2022 it will officially have a new name — Uptown Rapid.

Here are five predictions from retail experts about Black Friday 2021 — plus, how you can navigate the upcoming sales. Also, check out more of the week's best tips from financial experts.

South Dakota has certainly been in the news recently. Coverage of the leaked "Pandora Papers" included headlines like "How South Dakota became…

Social Security Checks Will Be Much Bigger in 2022. That's Bad News for Retirees

Did you catch any of these changes that hit this year?

How to get the best Walmart Black Friday 2021 deals

Walmart is rolling out three sales events with its second annual "Black Friday Deals for Days."

What’s scarier than the terrors of Halloween? For many people, it’s trying to find love on a dating app.

More than 10,000 Deere & Co. workers went on strike Thursday, the first major walkout at the agricultural machinery giant in more than three decades.

Astronomers may have discovered the first planet outside of our galaxy

How to decide whether to get a debit or credit card

How to decide whether to get a debit or credit card

Ashley Holmgren and Jason Bryce stand at the Deadwood trailhead of the Mickelson Trail with e-bikes. Bryce is a co-owner of Gold Rush E-Bikes rental business, which is located near the trailhead in Deadwood.

An e-bike from Gold Rush E-Bikes rental business sits on the Mickelson Trail. The battery-powered bikes allow people to explore the trail, particularly on inclines, farther and more easily than they might otherwise.