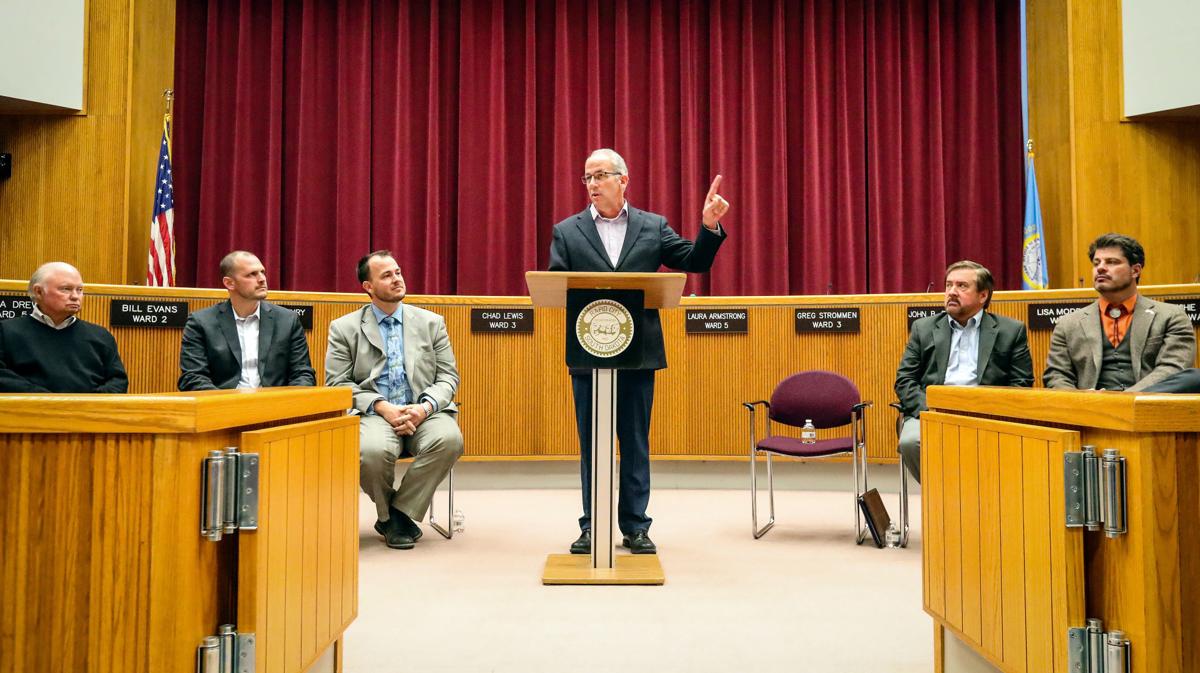 Mayor Steve Allender speaks at a Nov. 13 press conference at city hall about the proposal for a mixed use land public-private development venture on the 500 block of St. Joseph Street in Rapid City. 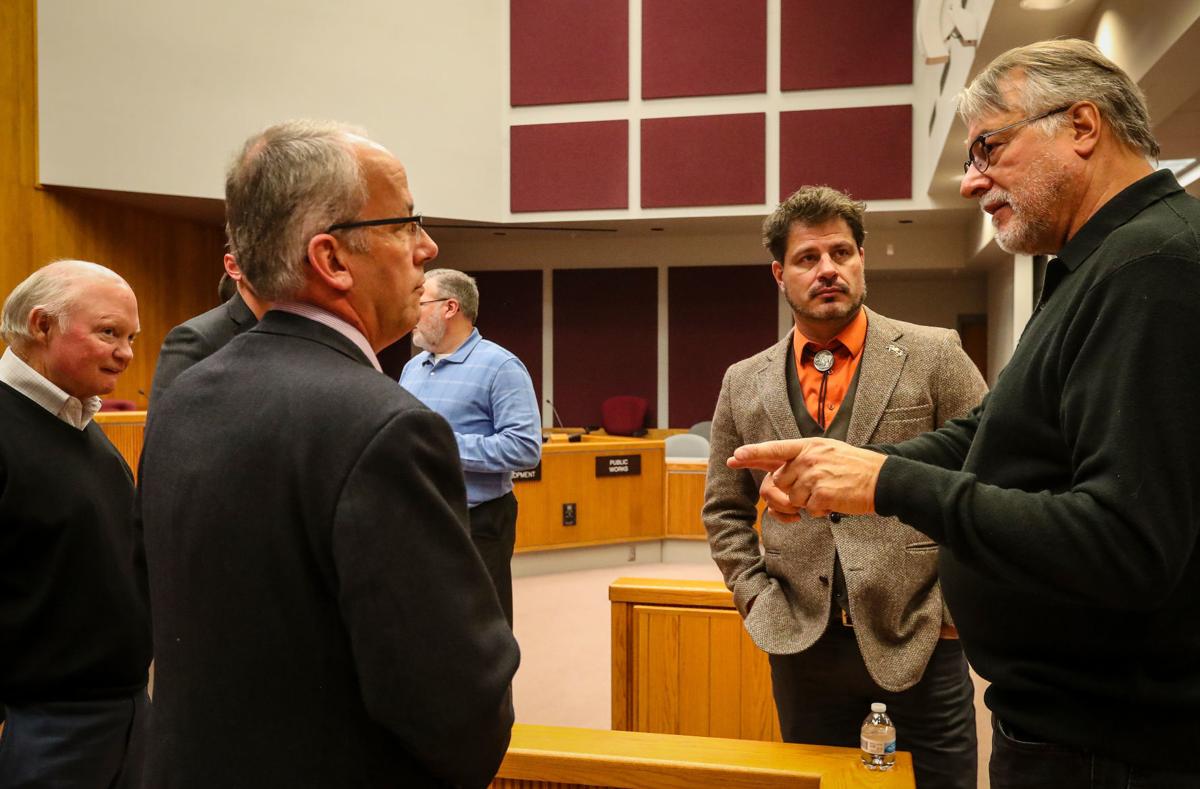 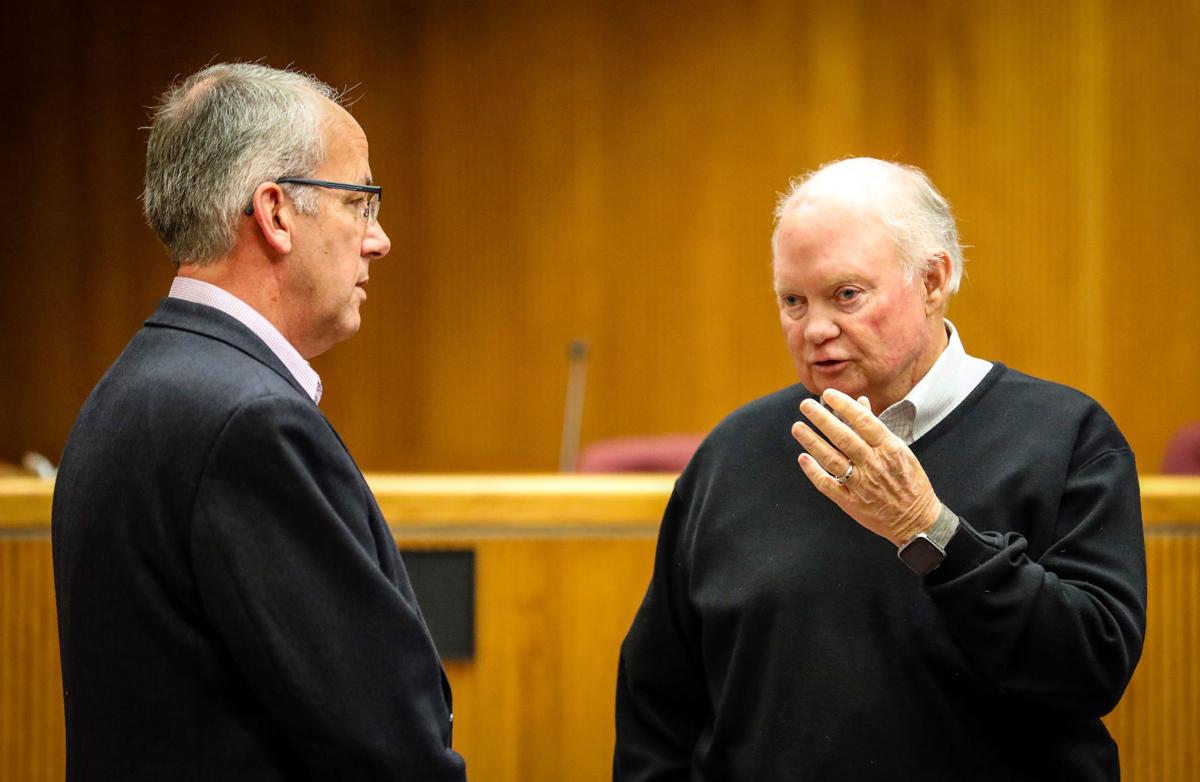 Rapid City Mayor Steve Allender said he always tries to learn from his mistakes and he thinks governments should as well.

For more than a decade, the city worked to develop the area of 5th Street and St. Joseph into President's Plaza. A city-owned parking lot is all they have to show for years of effort.

"It took us 13 years to go from concept to design to failure," Allender said at a Nov. 13 press conference. "That is 13 years of lessons to learn."

Those lessons have brought the city to a new step in the development of the area. After Elevate Rapid City paid to hire the TEGRA Group to oversee the selection process and three firms provided proposals on the best way to develop that area.

A selection committee made up of Elevate Board members and city officials selected the Lloyd Companies' plan. The Lloyd Companies have also recently added Luke Neely and Bob Heibult to their team and opened a Rapid City location.

Jake Quasney, Executive Director of Development for the Lloyd Companies, said the new project will be the first of many the company is involved in locally.

"We expect Rapid City to become a hub for our company," Quasney said. "Our long-term goal would be to have at least 1,000 apartment units in the area along with several multi-use projects."

Mayor Allender said the easy thing for the city to do would have been to sell the property to a developer and wash its hands of any responsibility.

"The easy way out would be to sell it," Allender said at the press conference. "Then you could have anything there. But we didn't want to do that."

In order to maintain some involvement and direction in the project, the city is hoping to enter into a public-private venture with Lloyd Companies. Quasney said that concept fits well with the company's business model. The project will be a mixed-use facility that includes retail, residential and hospitality rooms in addition to parking.

"We have done a lot of projects like that," Quasney said. "We get a lot of valuable input and then we bring the reality of how to develop the property to the conversation. We always work to produce products that anyone would be proud of years from now."

Anyone who has visited Sioux Falls may recognize some of the projects the company has completed there. The downtown Hilton Garden Inn, the Meadows on the River, and Garden Village are all developments that Lloyd Companies have developed and manage.

Quasney pointed to some of the company's projects in uptown Sioux Falls as an example of their work.

"That area has been transformed from a salvage yard to an active place where people want to relocate," Quasney said. "The nice thing is that this area is no salvage yard. We have a great place to start and we are excited to get to work here."

Quasney said the development won't likely stack residential and hospitality components on top of one another.

"We haven't found that to be an efficient way to deliver those structures so they will most likely stand next to each other," Quasney said. "From the moment we were notified that this was coming our way, we began the market studies. Those things are all coming in the process."

He said usually when their company gets to this point, there is already a shovel in the ground with work under way. But he said the process of working with the city government and residents was an important part of this project and they look forward to working together to make the project what the city needs.

Allender said in the years that the city has tried to get the development done on this corner, the needs and desires of some downtown residents have shifted. He said some people aspire to a lifestyle where they can live within a community designed in such a way that they don't have a need for an automobile.

Elevate President and CEO Tom Johnson said he sees the downtown area as the heart and soul of the city and that is why projects like this one excite him.

"The heartbeat keeps you alive, pumping the blood with commerce," Johnson said. "Soul is about culture and the arts and why you really want to live in a place. Downtown Rapid City having this mixed use development really brings that soul."

Johnson said downtown Rapid City will be doing amazing things for the next five to ten years.

"I have never met a company that considered moving to a city that didn't ask about the downtown area," Johnson said. "In fact, I was with a prospect this week discussing possible relocation of a business and after having dinner, they said they want to be in downtown."

Community Development Director Ken Young said he sees this project as part of the bridge between downtown Rapid City and the South Dakota School of Mines & Technology.

Allender said he was happy to be at this point in the process.

"We have had this plan, but until you put it into action, it doesn't mean anything," Allender said.

The next step in the process, he said, will be discussions with the city council, residents and other groups to identify needs for the project and help guide the Lloyd Companies to make the project work for the city.

The Chamber of Commerce division of Elevate Rapid City took the opportunity to honor a local woman Wednesday while Gov. Kristi Noem — the stat…

Mayor Steve Allender speaks at a Nov. 13 press conference at city hall about the proposal for a mixed use land public-private development venture on the 500 block of St. Joseph Street in Rapid City.