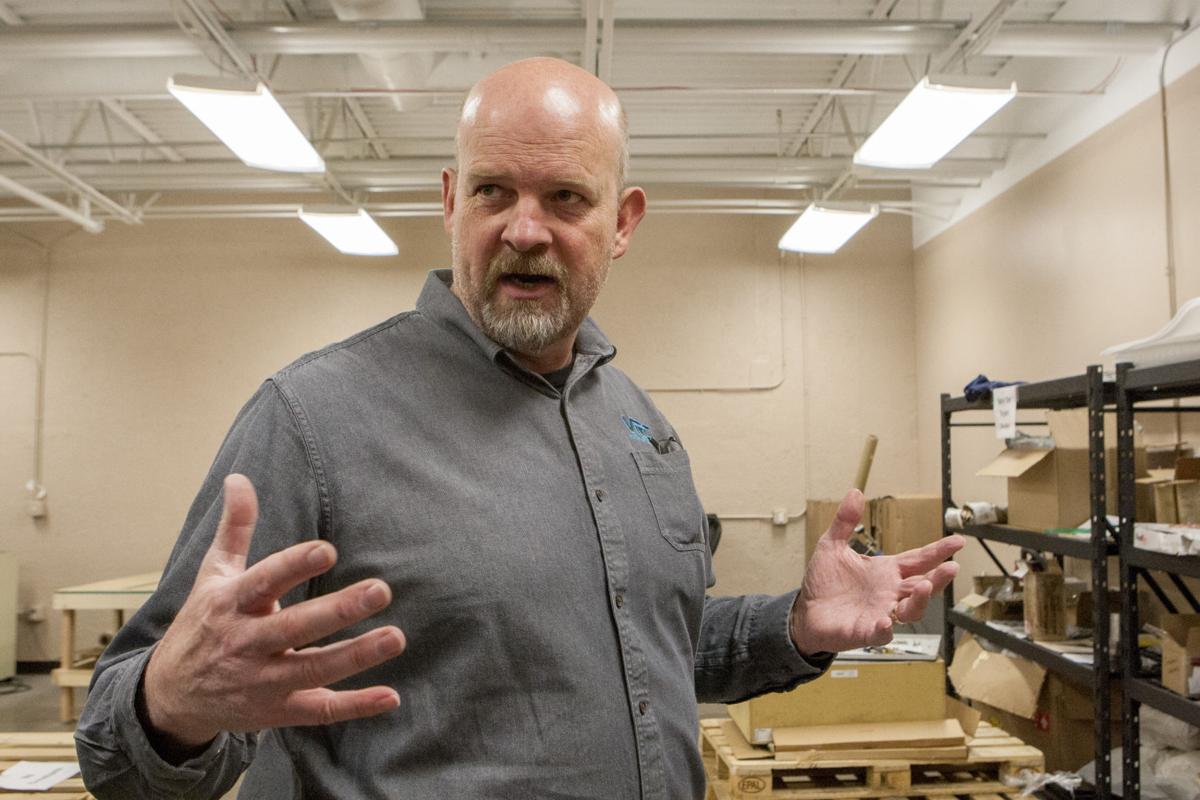 Rob Hrabe, president and CEO of VRC Metal Systems, talks about the growth and development of the business. The company will soon be moving from the Black Hills Business Development Center on the South Dakota School of Mines & Technology campus to the former Vandenburg Elementary School building in Box Elder. 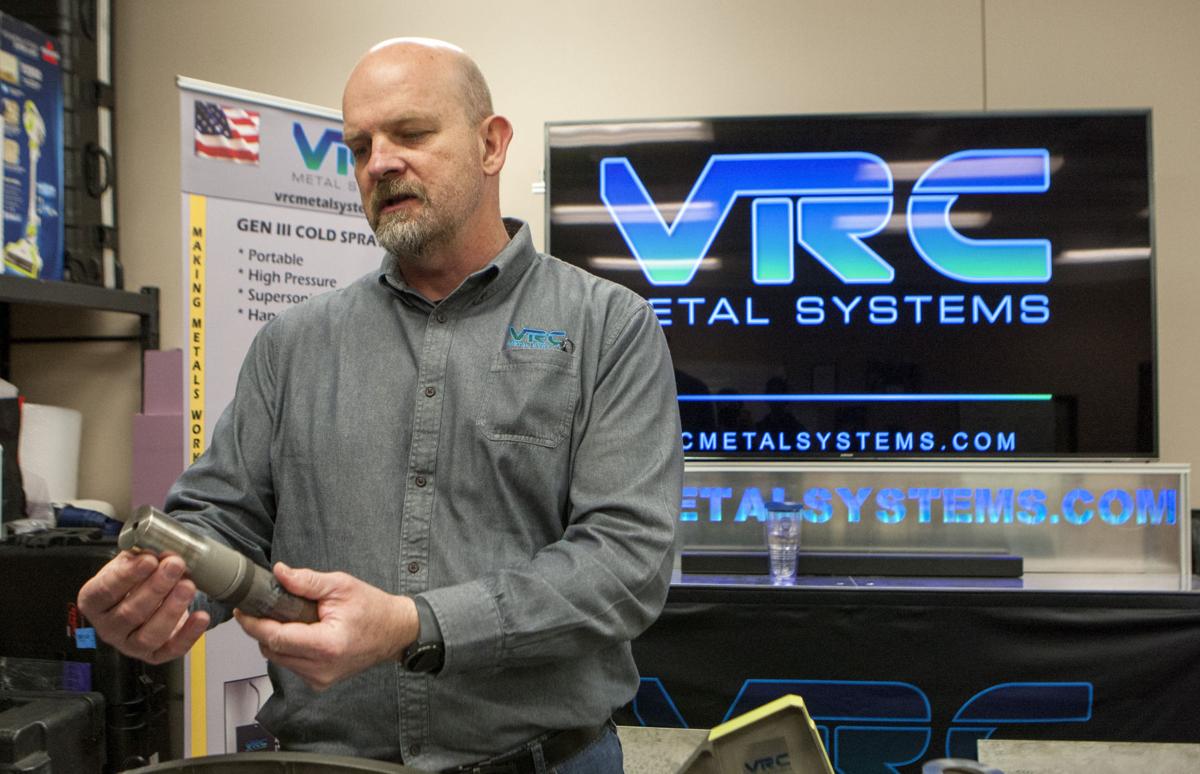 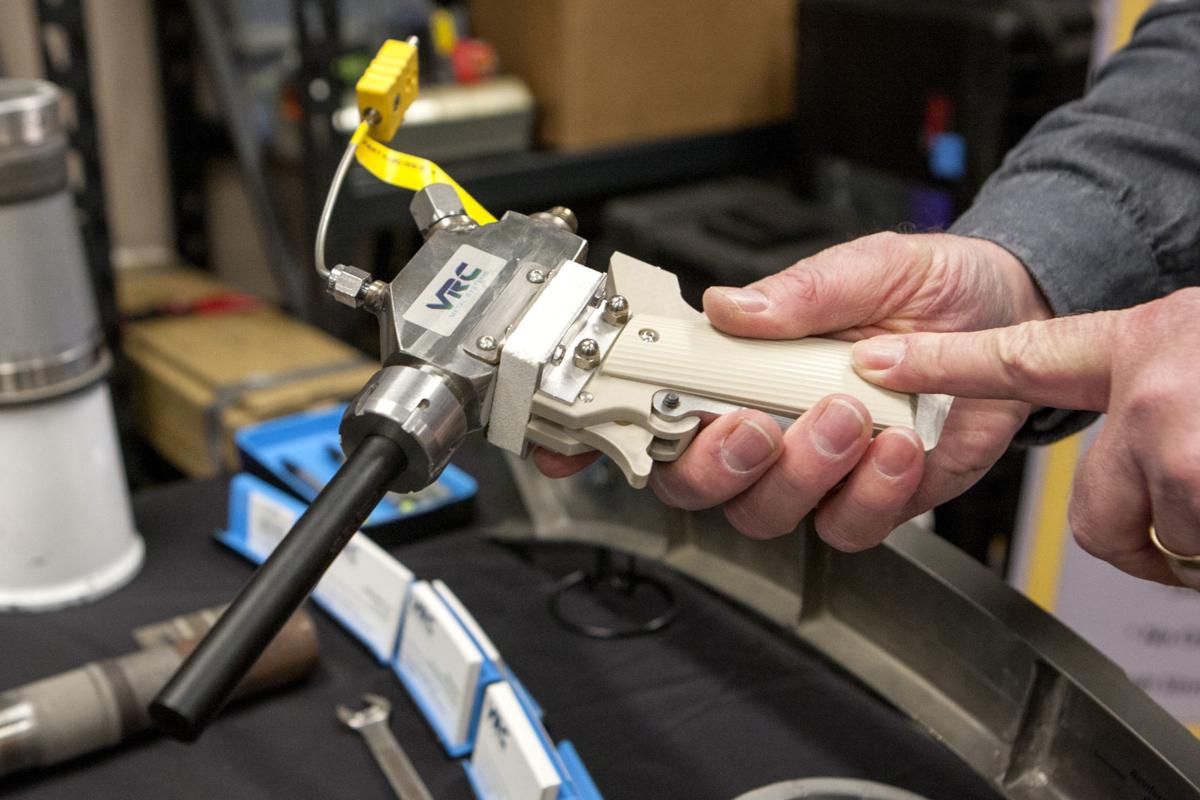 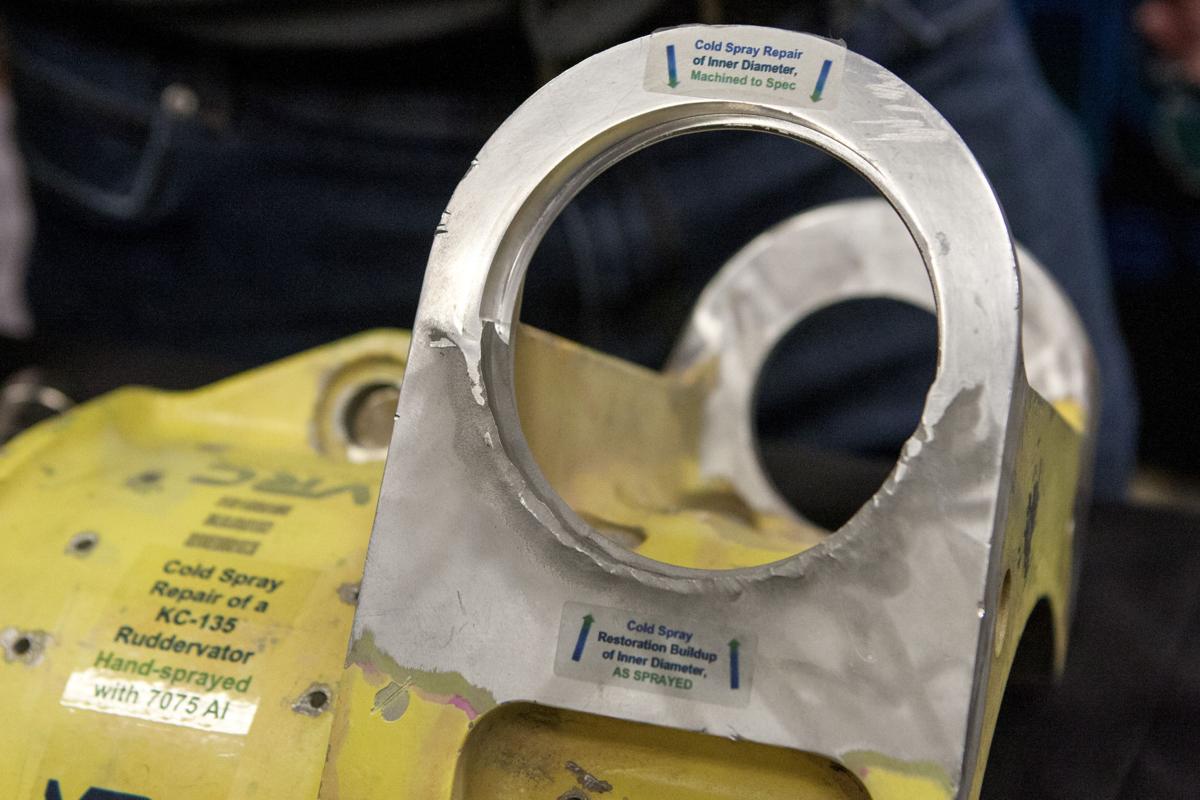 A sample part that shows the result of the cold spray process on the bottom half of the ring and the finished product after it has been cold sprayed and machined to specifications on the top half.

Rob Hrabe and Christian Widener have spent more than a decade building a home-grown company with a reputation of providing cost-effective, quality metal repairs to key components of military aircraft.

The company they brought to life at the Black Hills Business Development Center on the South Dakota School of Mines & Technology campus is preparing to leave that nest in 2018, with a move to the former Vandenburg Elementary School building in Box Elder.

Hrabe, VRC president and CEO, looks at the pending move away from the Business Development Center with a combination of excitement and reluctance.

“That’s been a good situation for us, so we hate that part of moving out of here,” he said. “The incubator is meant to be a temporary home to build your business then move on out into the real world.”

The real world seems to be ready for the cold spray process developed by Hrabe, a retired B1-B bomber pilot and engineer, and Widener, company co-founder and School of Mines engineer, from an Army Research Lab funded experiment to develop potential aircraft repair technologies at SDSM&T.

Their cold spray process uses heated inert gasses, such as helium and nitrogen, to propel microscopic metal particles at up the three times the speed of sound to bond both similar and dissimilar types of metal to repair expensive aircraft panels and castings.

Several years of testing on various aircraft parts provided by Ellsworth Air Force Base as part of a Defense Department study have proven the worth of the cold spray process.

VRC has since landed around $14 million in federal contracts with all branches of the U.S. military and the Department of Energy, Hrabe said

Hrabe said the contract is for development of a cold spray system that can be broken down to fit through the small hatch of a submarine or be used on a surface vessel.

Renovation of the former Vandenburg School, empty since completion of a new school a couple of years ago, is underway with removal of asbestos from the 50-year-old building.

The $5 million renovation is to be completed in two phases, with Hrabe hoping to move in to the 55,000 square-foot facility next spring.

The ten-acre site could also accommodate another building, which Hrabe hopes to add in a third phase.

VRC had already outgrown the Business Development Center, located on the east side of the SDSM&T campus. Part of the company’s operations have moved to a facility off of Deadwood Avenue.

“Once we move out, we’ll be able to consolidate everybody into one facility, and we won’t be driving back and forth across town to have meetings. That will help us,” Hrabe said.

More icing on the cake: VRC was recently recognized by Inc. Magazine as one of the 500 fastest growing privately-owned companies in the nation.

The company was No. 413 out of 500 companies to make the top cut, and one of only nine manufacturing firms featured on the list.

Eleven South Dakota firms made the top 5,000 on the Inc. list, with VRC the only state-based company to make the top 500.

Hrabe traveled to California to accept the honor on behalf of the company.

“We got to meet a lot of entrepreneurs who had built businesses from scratch, so it was a big deal,” he said.

Hrabe said the cold-spray technology also has great potential for the civilian business sector, not just for repairing parts without the heat stress of traditional welding, but for production of new pieces through 3-dimensional printing technology.

Hrabe said he’ll miss not having “all the smart people” at the School of Mines available just down the hall from the Business Development Center once VRC completes the move.

His company’s success story could be just one of many emerging technologies at School of Mines just waiting to be developed and marketed, with the payoff being more technical-oriented jobs to keep more young people in the state.

“You’re growing all this talent at the School of Mines and then you’re exporting it to Minneapolis and Denver, places all over the country, rather than keeping some of it here and having higher-paying jobs locally,” he said.

“The more tech jobs we can create, the better for our overall local economy,” he said.

The move and expansion is expected to help VRC expand its workforce, now at 57 employees, to more than 100 by the end of next year, Hrabe said.

PIERRE | Four finalists for president of South Dakota School of Mines & Technology were named Monday by the South Dakota Board of Regents.…

Rob Hrabe, president and CEO of VRC Metal Systems, talks about the growth and development of the business. The company will soon be moving from the Black Hills Business Development Center on the South Dakota School of Mines & Technology campus to the former Vandenburg Elementary School building in Box Elder.

A sample part that shows the result of the cold spray process on the bottom half of the ring and the finished product after it has been cold sprayed and machined to specifications on the top half.