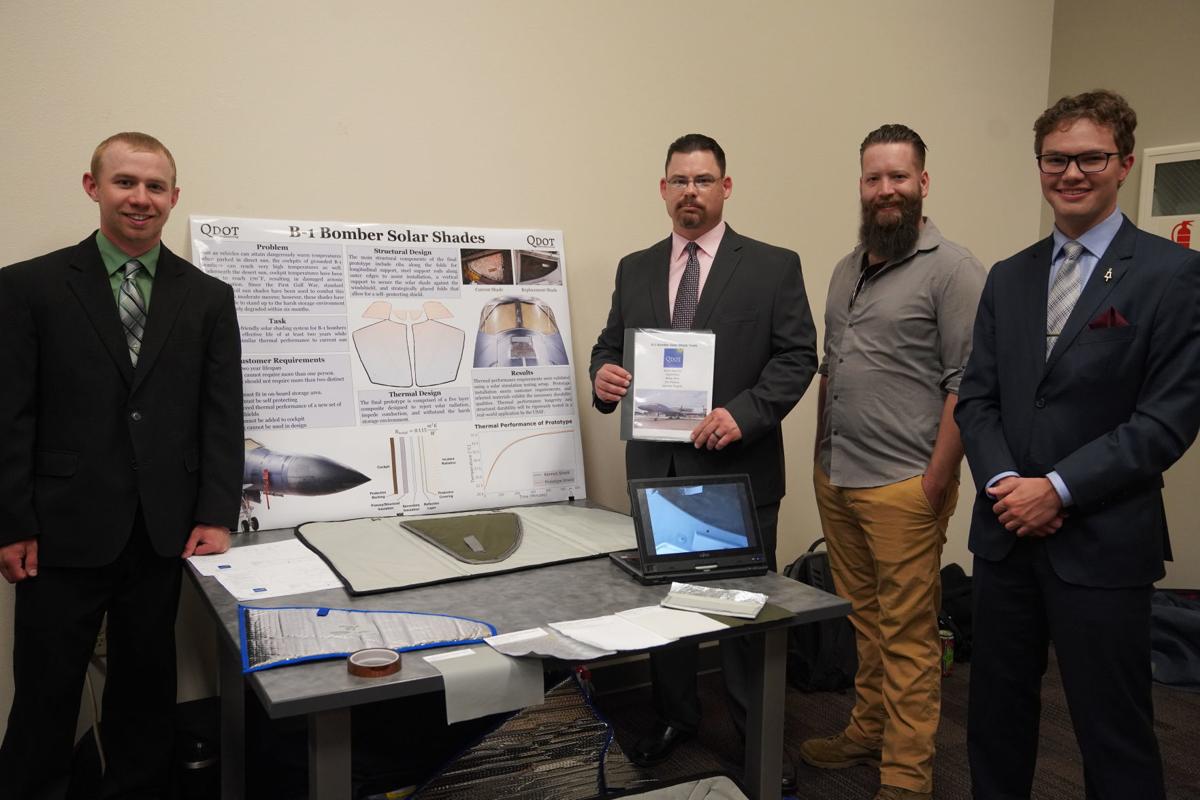 A design team made up of students from the South Dakota School of Mines and Technology present their findings on a prototype of a B-1B Lancer solar shield.

A prototype solar shield is used in the B-1B Lancer cockpit to reject solar radiation and handle a harsh storage environment. A team of students from the South Dakota Mines and Technology developed the shield.

Ellsworth Air Force Base and the South Dakota School of Mines and Technology have partnered to develop a solar radiation shield for the B-1B Lancer.

Just as a vehicle can overheat from sitting out in direct sunlight, so too can an aircraft. At times, the temperature in a jet can get high enough to damage equipment or cause heat-related injuries to aircrew members. The current method of preventing these outcomes is a shiny metallic sun visor, similar to those used in cars and trucks.

“Airman comment that, in an unprotected plane, any metal parts in the plane are too hot to touch,” the SDSM&T solar radiation shield development team stated. “Solar shades greatly reduce the radiative heat transfer into the cockpit … Without sun shades, high frequency radiation from the sun penetrates the transparent windshield and is absorbed by the cockpit interior driving the inside temperature to extreme highs.”

A goal of the project is to make the new sun visor more effective and longer lasting than the current iteration. Prototypes have been made using a five-layer composite, the implementation of which showed success in testing.

“In order to validate the thermal performance of the shield, a testing setup was constructed using a metal box with a glass window to simulate the cockpit and a tungsten-halogen lamp to provide a radiative heat source,” the team described. “This setup was used to show that the prototype shield has nearly identical thermal properties as the current shield; however, because of the new folding design and the materials used in construction, our shield is expected to last three times longer than the current shields.”

Further testing will be done by the U.S. Air Force, they added.

The project idea arose when Col. John Edwards, the former 28th Bomb Wing commander, and Chief Master Sgt. Adam Vizi, the former 28th BW command chief, traveled to Al Udeid Air Base, Qatar, in 2018. They were there to visit with Airmen from Ellsworth Air Force Base who were deployed to support operations within U.S. Air Forces Central Command.

Al Udeid AB can be extremely hot, and while Edwards and Vizi were there, they experienced cockpit temperatures in the B-1s that were near 140 degrees Fahrenheit. They decided to find a solution and were excited to spend innovation funds on a project that would help deployed aircrews and maintainers.

“The shields will improve working conditions in the cockpit,” Edwards said. “It also helps to protect the sensitive electronics on aircraft. Crews won’t be fatigued from the excessive heat at the beginning of their long missions. In those hot environments, it’ll help to reduce the risk of dehydration and other health risks.”

Defense bills include $24.8 million for Ellsworth

Separate versions of the National Defense Authorization Act that recently passed the House and previously passed the Senate both include $24.8…

Just six of the nation’s B-1 bombers are fully mission capable, according to U.S. Sen. Mike Rounds, R-S.D.

A design team made up of students from the South Dakota School of Mines and Technology present their findings on a prototype of a B-1B Lancer solar shield.

A prototype solar shield is used in the B-1B Lancer cockpit to reject solar radiation and handle a harsh storage environment. A team of students from the South Dakota Mines and Technology developed the shield.