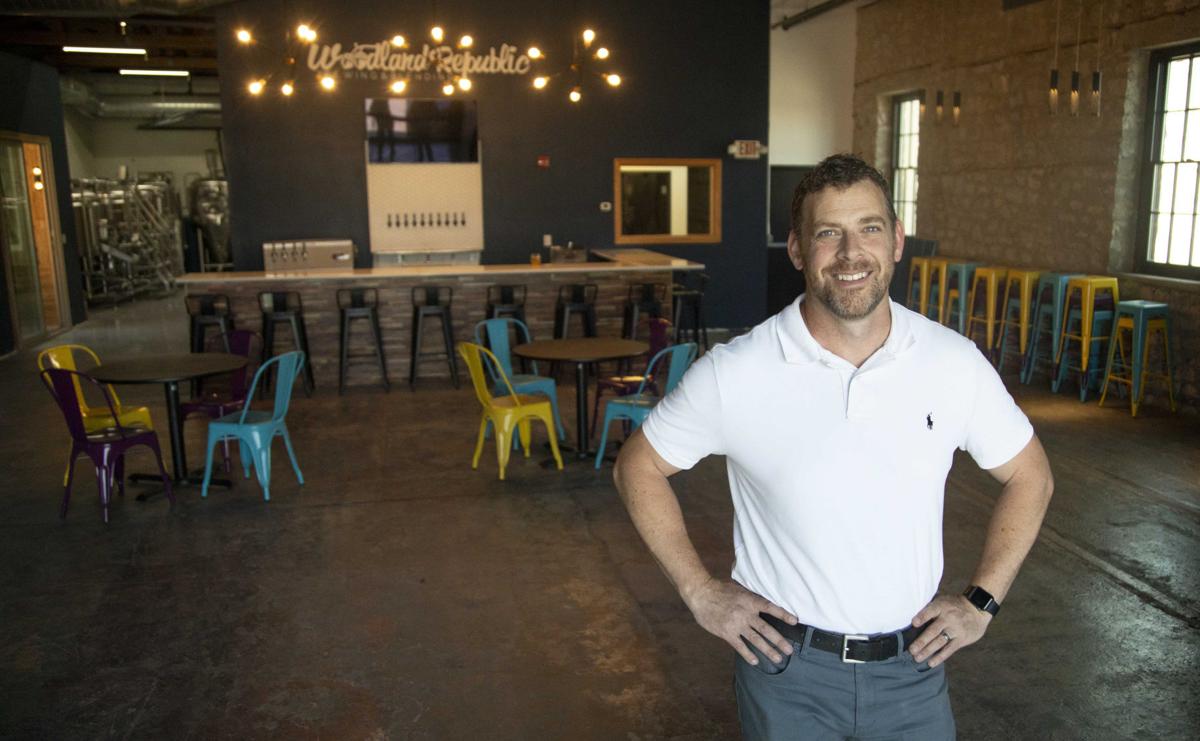 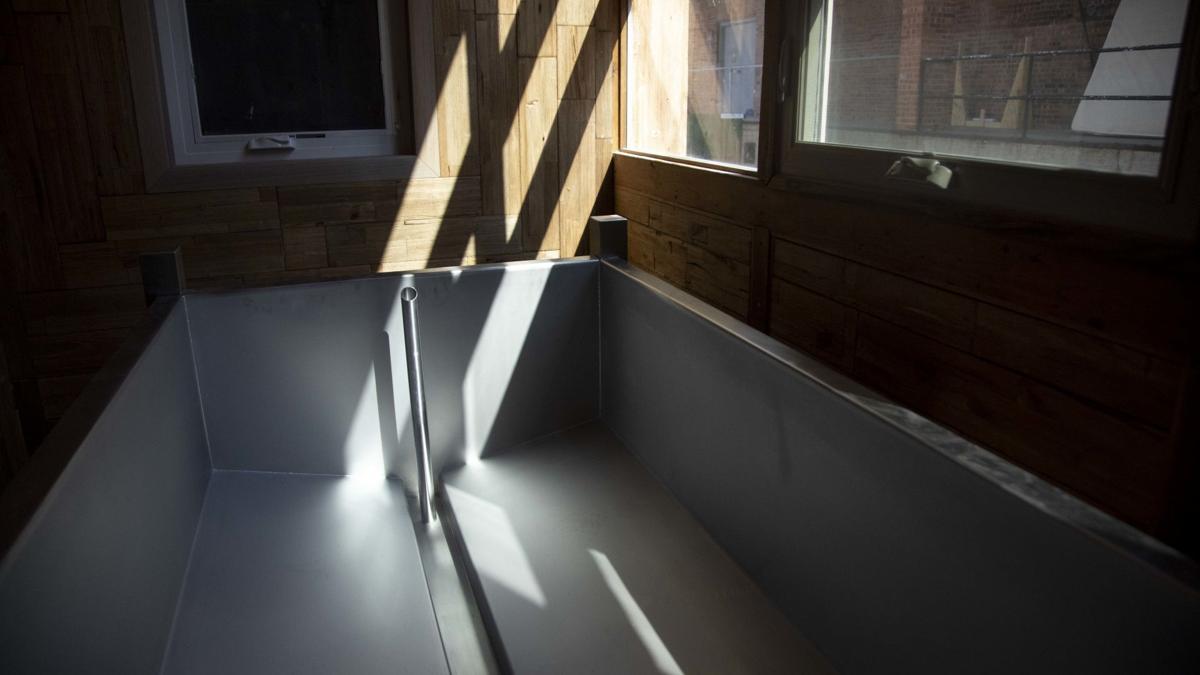 A cool ship used for spontaneous fermentation of beer is seen at Woodland Republic Brewing and Blending. “Cool ship is where you do the spontaneous fermenting and let the air cool it, and whatever’s in the air ferments the beer. I think we’re the only one in western South Dakota that has one of those. It’s a cool thing for beer snobs,” owner and brewer Jesse Ewing said with a laugh. 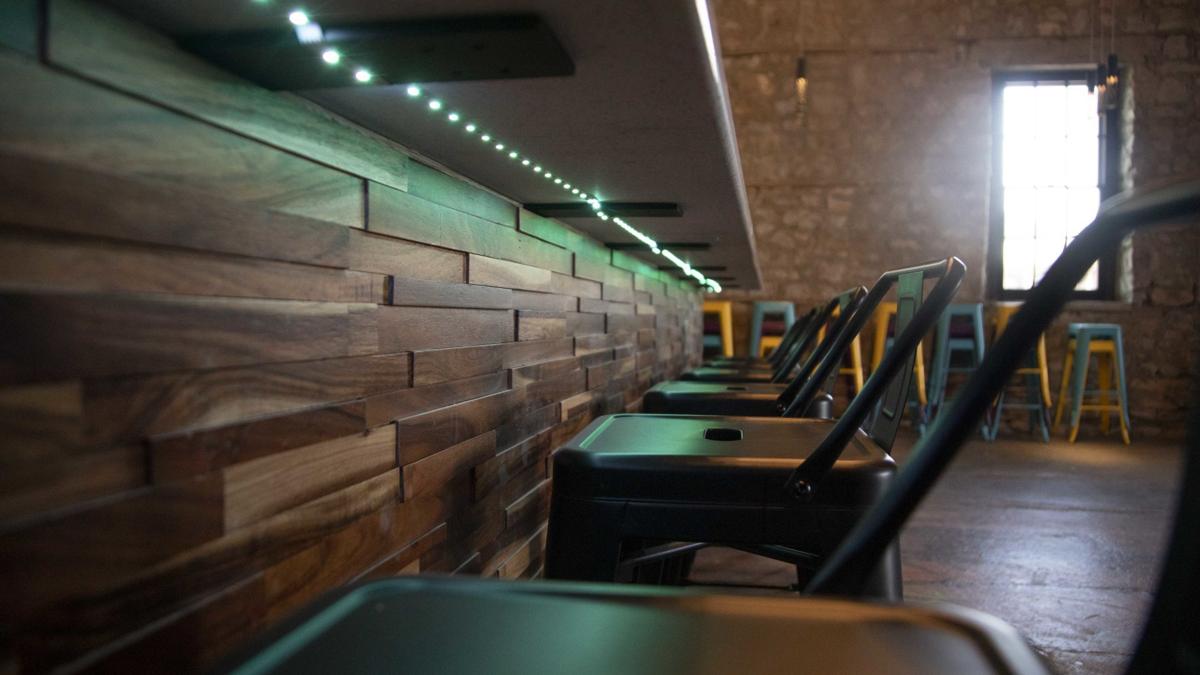 Chairs line the bar at Woodland Republic Brewing and Blending. 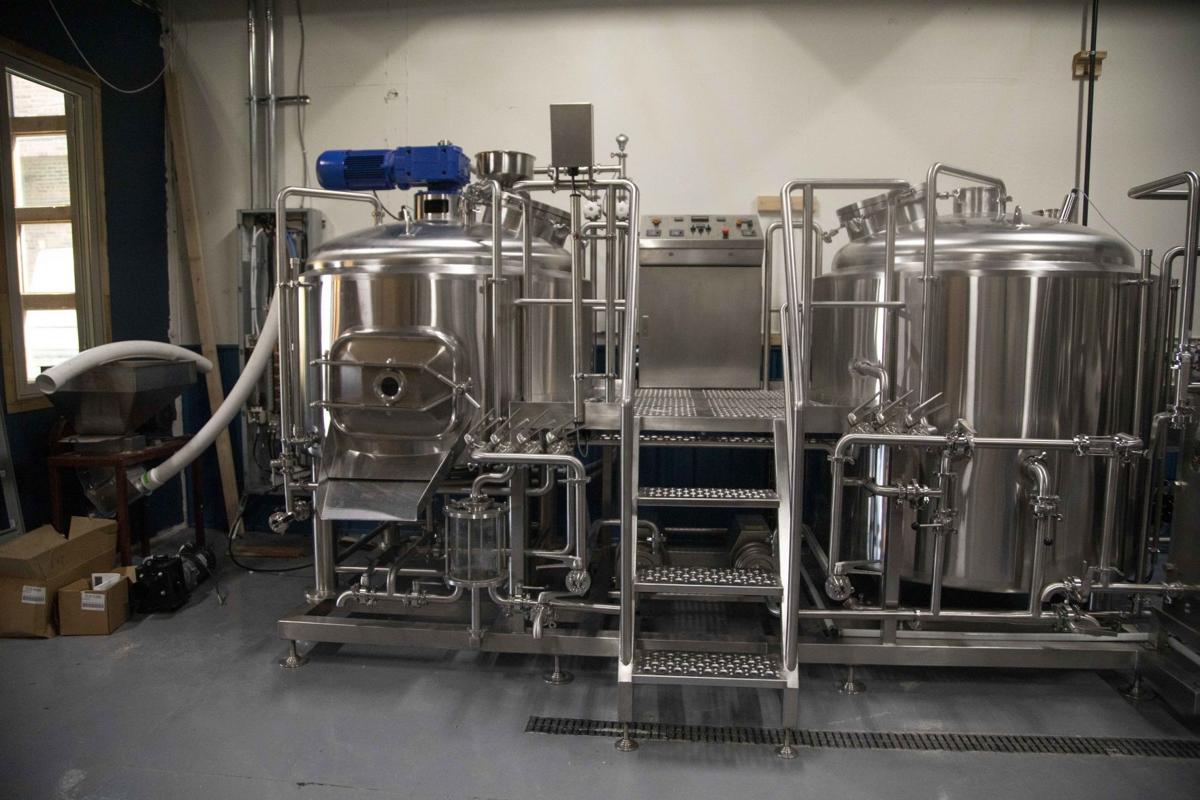 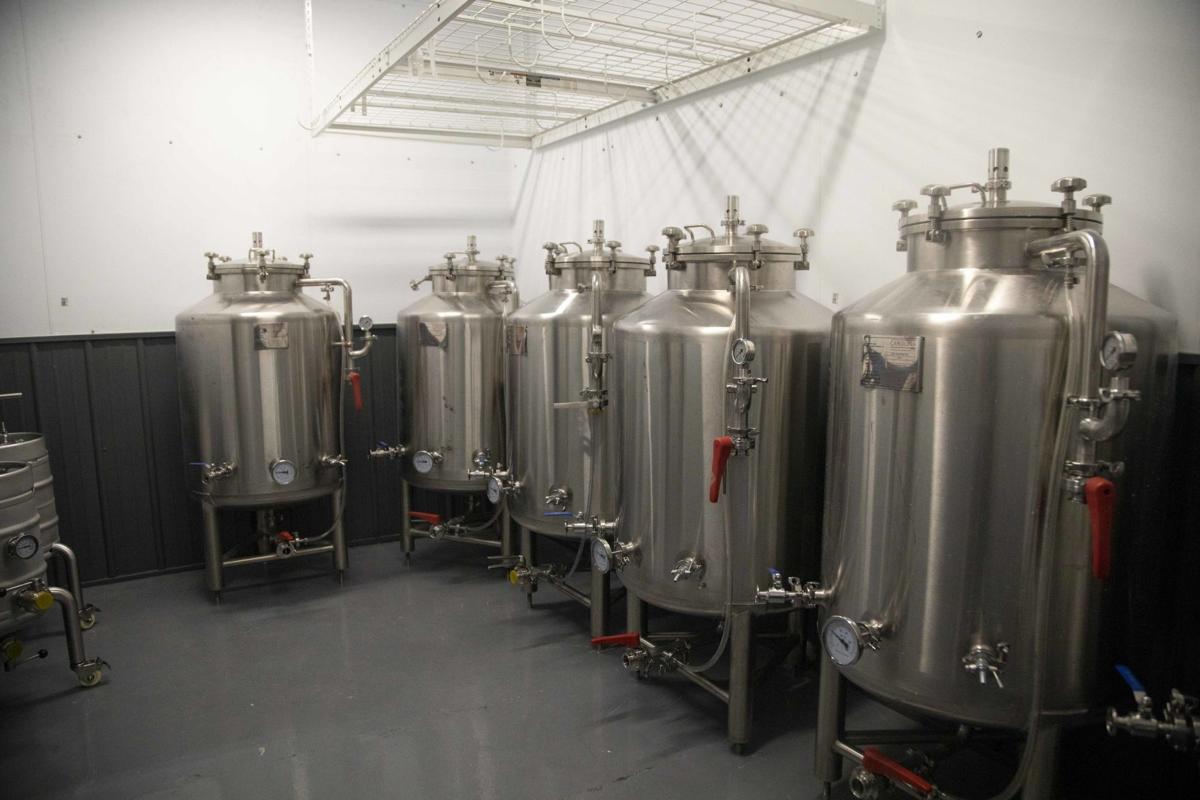 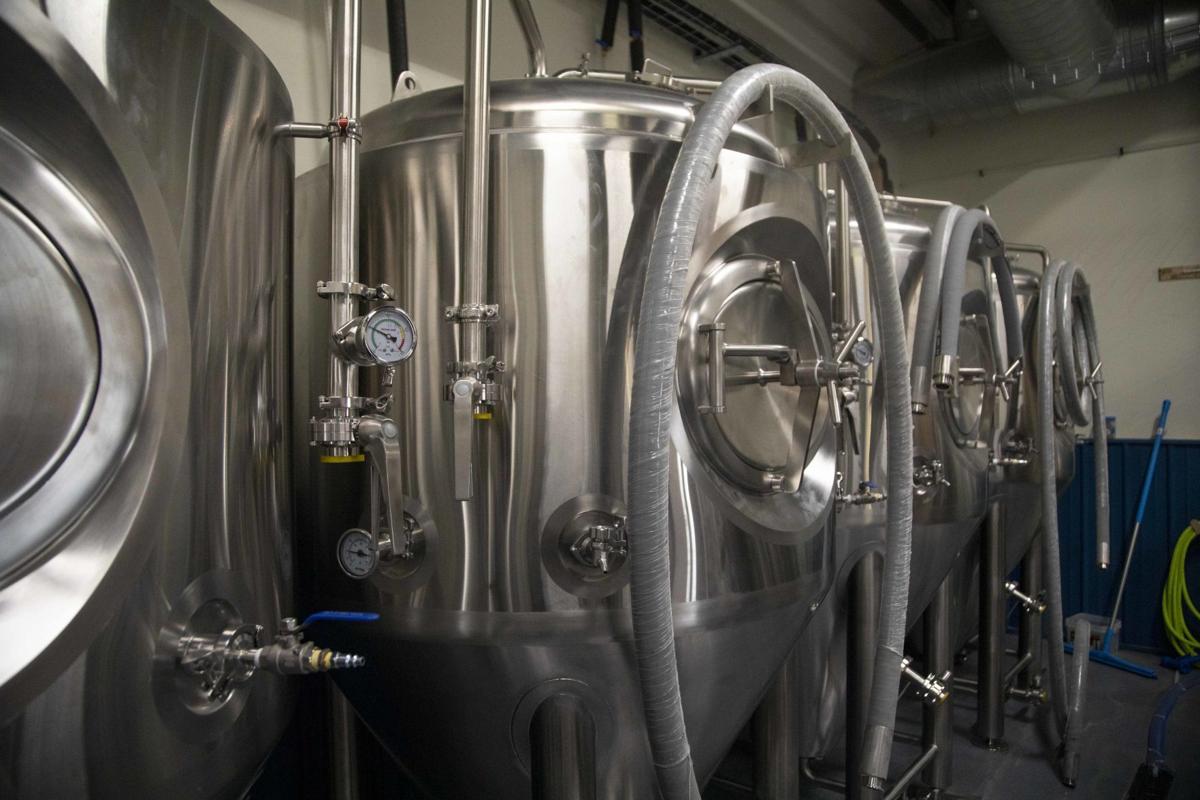 Woodland Republic Brewing and Blending is bringing a sour note to the Black Hills craft brewing industry, and owner Jesse Ewing believes beer and wine aficionados will love it.

Woodland Republic is part of the revitalization happening at the Aby’s Feed and Seed complex in downtown Rapid City. Ewing hopes to open his brewery in August. It will join beer and wine bar and recording studio Aby’s at the Seed, which opens this month, and The Cave Collective, which opened in May.

Ewing is a longtime home-brewing enthusiast and staff member at Sen. John Thune’s office. Ewing said time at home during the COVID-19 pandemic gave him the opportunity to develop a business plan and launch his dream business.

Woodland Republic will specialize in spontaneous and sour beers, which Ewing said are new in the Black Hills. The beers are produced in small batches and single barrels; Ewing likens his brewery to a boutique winery. The Woodland Republic website says the beers will vary from vintage to vintage through blending, fruiting and aging in oak and stainless steel barrels.

Ewing’s brewing style borrows from the Belgian tradition of spontaneously fermented beer. Spontaneous fermentation occurs when a brewer leaves the inoculation (when yeast and bacteria come in contact with the liquid) up to whatever organisms happen to be in the air or on the fruit that’s fermenting. Brewers don’t know precisely what will end up in the beer.

“You leave it sit outside overnight and see what drops into it. There’s a season that you want to do it when it’s cooler at night. Otherwise you get nasty bugs and bacteria,” Ewing said, recalling his early beer-making attempts.

“It actually worked really well the first time. I took some samples and sent them to a lab in Nashville, and they’re able to isolate the yeast strains and tell you what you have floating around,” he said.

Ewing is primarily a self-taught brewer who’s excited by the unpredictability of blending spontaneous and sour beers. The beer can take 12 to 18 months or longer to fully ferment, he said, which is why fewer craft brewers make them. Woodland Republic will start out only being open on weekends until production can pick up enough to fill all 12 taps.

“A lot of times people who are wine drinkers end up becoming fans of sour beer, and I think a big part of that is that sour beer is acidic like wine is, and fruity. We describe it in fruity terms like lemons and limes,” Ewing said. “What we’re planning to do is barrel age quite a bit of it and you get a bit of that carryover (flavor) there.”

The beer lends itself to fun combinations of flavors. Key lime cheesecake sour and blueberry French toast sour are some of Ewing’s recent blends.

“Who doesn’t want to try something like that?” Ewing said. “You have the freedom to do something a little bit different.”

Ewing got his start with craft beer in 2004 using a home-brewing kit. He liked the first batch and that encouraged him to keep brewing. Since 2007, he’s been a regular at the Great American Beer Fest in Denver, only missing a year in 2014 for the birth of his youngest son. Ewing and his wife, Janie, have four children ages 13 to 6.

The Great American Beer Festival is like the Super Bowl for breweries, Ewing said, where thousands of beers can be sampled in one place.

“You’ve got to pace yourself, for sure,” Ewing laughed. “You’ve never seen anything like it. Everybody in that room is like your best buddy and everybody’s having fun. They’re beer snobs.”

Ewing tried sour beer for the first time in 2009 and he was immediately hooked.

“I like sour flavors. I had never had anything like it and I thought sour beers were awesome. When I came back (to Rapid City), you couldn’t find those anywhere around here. I thought if I like that, I have to start making those,” he said.

Ewing completed a brew immersion program in 2014, and in 2019, he won Lost Cabin Brewing Co.’s Homebrew Contest with a sour beer. His growing expertise, along with help and advice from friends in the craft brewing industry, encouraged Ewing to take the leap into owning his own brewery.

Woodland Republic Brewing and Blending will be a tap room with seating indoors for about 70 people, plus space outdoors for seating and to accommodate a food truck, Ewing said.

“We want it to be a family-friendly place,” he said.

Hours tentatively will be noon to 10 p.m. Friday and Saturday and noon to 8 p.m. Sunday. For more information, go to woodlandrepublicbrewing.com/.

What to expect at Apple's iPhone 13 event

Here are some financial to-do’s to tackle this fall. Also, check out more of this week's best money tips from experts.

3 Realistic Paths to a Millionaire Retirement

Becoming a millionaire may be much more achievable than you thought. Here's how to do it.

Health care in retirement is a big-ticket item. Experts estimate that an average 65-year-old retired couple in 2021 would need about $300,000 in after-tax savings earmarked for health care costs…

WASHINGTON (AP) — House Democrats began the serious work of trying to implement President Joe Biden’s expansive spending plan, but getting there will require remarkable legislative nimbleness, since Biden has said the revenue to pay for it must come only from Americans who earn more than $400,000 a year.

A cool ship used for spontaneous fermentation of beer is seen at Woodland Republic Brewing and Blending. “Cool ship is where you do the spontaneous fermenting and let the air cool it, and whatever’s in the air ferments the beer. I think we’re the only one in western South Dakota that has one of those. It’s a cool thing for beer snobs,” owner and brewer Jesse Ewing said with a laugh.

Chairs line the bar at Woodland Republic Brewing and Blending.