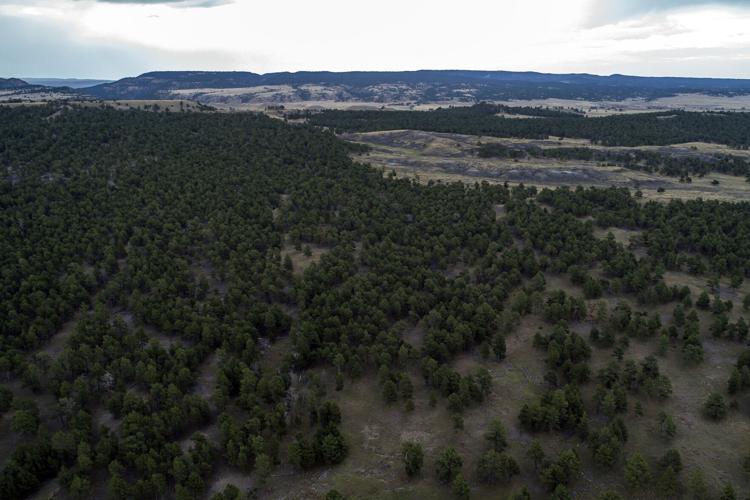 An overhead photo of potential uranium mining land in Fall River County is shown. Residents of the county will be able to vote in November on a ballot measure that would introduce an ordinance making uranium mining a nuisance. The ordinance comes as an attempt to halt Powertech USA from mining uranium using underground aquifers that supply water to Fall River and Custer counties. 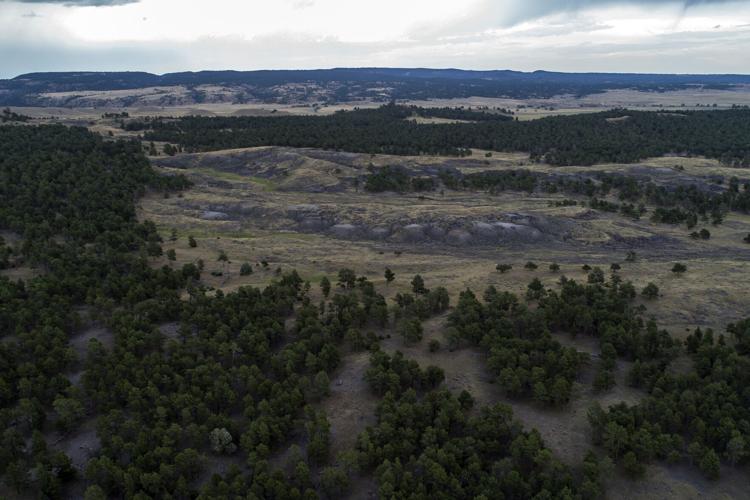 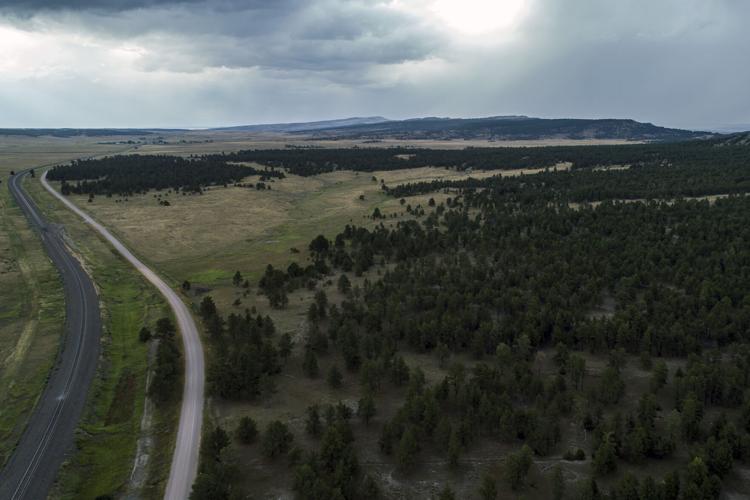 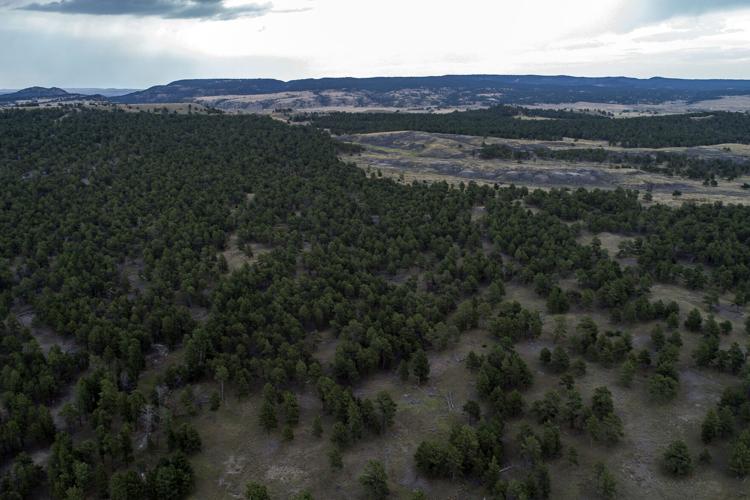 Fall River County, South Dakota residents will have the chance to vote on an ordinance making uranium mining a nuisance in November.

The item will appear on the ballot following the county commission’s 4-1 vote Aug. 11 to accept a petition requesting the ordinance with 448 accepted signatures. Auditor Sue Ganje said 31 signatures did not count from the initial filing due to people not being registered in the county, not registered at all or who had signed twice.

The petition came forward in another attempt to prevent companies — namely Powertech USA— from mining for uranium in the county. Powertech’s Dewey-Burdock project is close to receiving its permits that would allow in-situ leach mining about 13 miles northwest of Edgemont, South Dakota, near the Wyoming state line.

In-situ mining is similar to fracking in which injection wells are used to pump groundwater fortified with oxygen and carbon dioxide into the ore deposits to dissolve uranium. The production wells are then used to pump the uranium-laden fluids to the surface for recovery. For the Dewey-Burdock Project, fluids from the production wells would be processed at two separate facilities at the mine site to extract and concentrate the uranium, according to a project description on the Dept. of Agriculture and Natural Resources website.

The Dewey-Burdock Project is comprised of 12,613 surface acres and 16,962 net mineral acres. In December 2020, Powertech filed an amended and restated technical report and preliminary economic assessment. It shows that capital expenditures are estimated at $31.7 million, and the project could produce 14.3 million pounds of triuranium octoxide, a compound of uranium, over its 16 years of production.

Powertech has been in the permitting process to have water and mining rights for the project going through the Environmental Protection Agency, South Dakota Water Management Board and Nuclear Regulatory Commission for about 13 years — it first submitted a groundwater discharge plan application March 9, 2012 for land applications of treated wastewater.

There have been weeks of public comment against the project at every appeal. The most recent decision includes the D.C. Circuit’s Aug. 9 rejection of the Oglala Sioux Tribe’s effort to reverse the NRC’s decision to grant Powertech’s license to extract the uranium, according to Law360. The tribe and its nonprofit association Aligning for Responsible Mining argued the approval violated the National Environmental Policy Act and National Historic Preservation Act.

If the ordinance is approved in November, residents would be allowed to sue companies attempting to mine for uranium on a nuisance claim, said Jim Sword, a former Fall River County State’s Attorney who wrote the draft ordinance.

Many in Fall River County are concerned about possible water contamination and what it means for agriculture and ranching, the largest industry in the county.

Powertech plans to appropriate 9,051 total gallons per minute of water from two underground aquifers which also supply water to communities in Fall River and Custer counties, including Edgemont and Hot Springs. Over 16 years, the project plans to use over 52 million gallons of water.

Susan Henderson, a landowner in Edgemont and an intervener in the Powertech case, said the water usage the company is proposing would likely dry up Fall River County.

“Everybody that’s got a well that’s 300 or 400 feet deep, that waters their vacation home or their home or their little ranchetter (sic) or something like that would dry up,” she said. “I’m pretty worried about what effect the contaminated water would have on my underground water supplies for my cattle, I have a good-sized cattle ranch.”

Rapid City uses about 6,500 gallons of water per minute, 2,551 gallons per minute less than Powertech’s proposal.

Mark Hollenbeck, project manager of the Dewey-Burdock Project, said the Cheyenne River, which gets its water from one of the aquifers, flows through the middle of his ranch.

“I live with it daily, and we see what the old mining did and didn’t do,” he said. “It’s discouraging that people that know very little about the project are so emotionally tied to its defeat and refuse to get educated.”

He said the NRC issued an environmental impact statement where questions on water and everything else were answered by experts.

Henderson said she’s not only worried about the possible contamination but foreign controls over the area’s water supply, namely Russia and China.

“The bottom line is our uranium is going to end up going for nuclear weapons, and it scares me to death,” she said. “Then you have to ask yourself if you want (President) Vladimir Putin in charge of your water. You just have to look at what he’s doing in Ukraine and you know that he’s not a nice guy. He’s a devil, he will destroy us. The other problem is that this water can be sold whether they do the uranium mining or not.”

Powertech, which merged with Hong Kong-based Azarga Resources in 2014 that merged with enCore Energy in 2021, is a wholly owned subsidiary of enCore Energy Corp. The company is a U.S. domestic uranium developer that is focused on “becoming a leading ISR (in-situ recovery) uranium producer,” according to its website.

Texas-based Uranium Energy Corp. agreed to buy Uranium One Americas Inc. from Rosatom’s Uranium One group for a total of $112 million in cash with an additional $2.9 million in estimated working capital and the assumption of $19 million in reclamation bonding.

“We are funding the war against Ukraine by buying their uranium as well as the world is buying their oil and gas,” he said.

Hollenbeck said to his knowledge there are no Russian or Chinese shareholders.

“Now, I don’t know who all the shareholders are, but certainly there is nobody that has a significant interest that would have to claim it,” he said. “At a certain point you have to list yourself as a significant shareholder and there are none from those two stories.”

Hollenbeck said there are a number of unsubstantiated rumors and stories about Powertech and its ownership, and claims the opponents are using non-factual and emotional appeals against the project.

Sword, who wrote the ordinance that could be put in place if the ballot item is approved in November, said he was approached by Henderson and a group of Fall River citizens about the ordinance idea.

“I know that people on the other side are frustrated with meetings, let’s just vote and have it out,” he said.

Henderson said 21 people helped carry petitions around the community, and it was a county-wide effort.

Fall River County does not have planning or zoning at the county level. Sword said that means the county relies on nuisance statutes.

Sword said if the ordinance is put into place and Powertech continues with its permitting and begins to mine, someone could sue the company to abate the nuisance. If the county declares it a nuisance, the nuisance has to go.

“If nobody sues them, then I guess they’re good to go,” he said.

An overhead photo of potential uranium mining land in Fall River County is shown. Residents of the county will be able to vote in November on a ballot measure that would introduce an ordinance making uranium mining a nuisance. The ordinance comes as an attempt to halt Powertech USA from mining uranium using underground aquifers that supply water to Fall River and Custer counties.