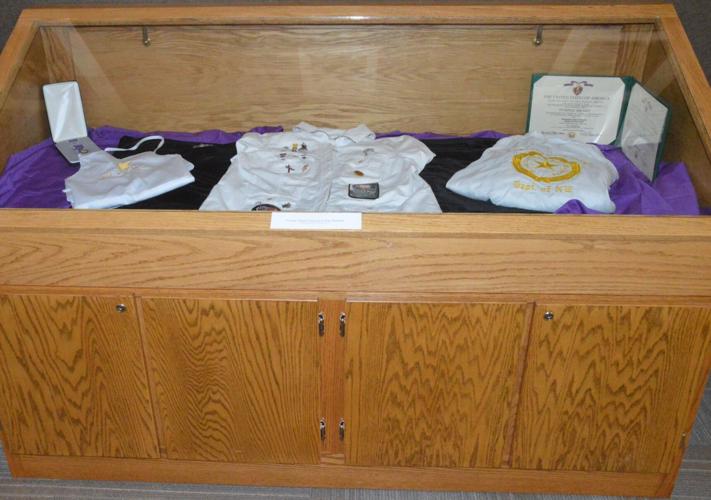 Part of the veterans display at the Mari Sandoz Heritage Center are Pat Mracek's Gold Star Mother jackets, as well as the Purple Heart awarded posthumously to her son. 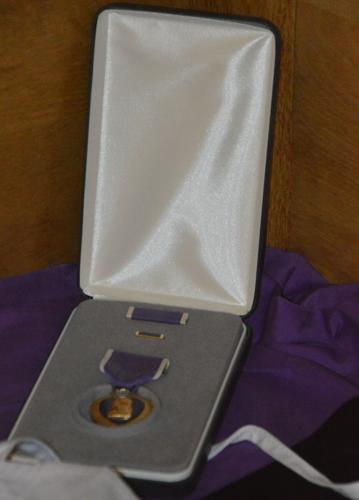 In 2015, the Chadron Post Office was dedicated to Sergeant Cory Mracek, a paratrooper with the U.S. Army 82nd Airborne, Third Batallion, 319th Field Artillery and the first soldier from northwest Nebraska to die in the war in Iraq following 9/11. This month, the Mari Sandoz Heritage Center will feature a collection of veterans’ uniforms and medals, put together by CSC Security Supervisor Mark Hunt, including a Purple Heart that Mracek earned.

Pat Mracek said her son attended school in Chadron for the first two years, but also attended at a rural school north of Box Butte Dam, at Bayard and at Mirage Flats. He graduated from Hay Springs High School in 1995.

From there, he attended Chadron State College for a semester before joining the 1057th National Guard. He completed Basic Training in Fort Sill, Okla., and later joined the U.S. Army full time and spent a year in Korea. Though it was his dream to be a member of the 82nd Airborne and go to Fort Bragg, N.C., issues with his paperwork had him instead going to Fort Campbell, Ky. and joining the 101 Airborne.

Instead of jumping out of planes, Pat said, he was rappelling from helicopters.

After getting out of the Army in 2001, Mracek was home for 18 months. He continued to work for the National Guard, and then for Wal-Mart. After 9/11, the Mracek family was standing on their porch holding candles in remembrance of the victims when Cory made the announcement — he was going back into the Army in early 2002.

Pat said at that point her son had already re-upped, and made his choice because his country needed him.

Cory went back to Korea for 15 months, with plans to still go into the 82nd Airborne. He returned home on leave in mid-2003, then went to Jump School and graduated in November of the same year. He spent another couple weeks at home on leave, then had to report to the 82nd on Dec. 1, 2003. Before Christmas, they knew they were headed to Iraq.

On Jan. 17, 2004, the unit left Fort Bragg, and were in Turkey two days for processing. Eight days later, on Jan. 27 outside Baghdad, he and two others — Second Lieutenant Luke James and Staff Sergeant Lester Kinney — were killed by an improvised explosive device (IED). Pat said the group Cory was with saw something suspicious and got out of their vehicle to investigate. She was told there was likely someone hiding with the actual detonator.

Two other soldiers were seriously wounded and another was injured. Cory was given the Purple Heart and Bronze Star posthumously. Though he never got his sixth jump to become a paratrooper in life, in July of 2004, 55 of fellow paratroopers made it for him and signed his logbook. The gesture makes him an official paratrooper.

As for having her son’s Purple Heart as part of the display at the Sandoz Center, Pat said in visiting with other Gold Star families, they all feel the same way. “We don’t want their sacrifice to be forgotten, so every time you remember them and what they’ve done it’s very meaningful.”

Pat further noted that the Gold Star Mothers have chosen to wear white as a symbol of sacrifice and remembrance, rather than black as a sign of grieving. If someone is all in white at a military function, they are possibly a Gold Star family member.

With Veterans Day this Friday, Nov. 11, Pat emphasized not everyone who has died in service is a veteran, as a veteran becomes one when he or she is out of the service. Cory truly was a veteran, she said, because he was in the service, then out, then joined again.

As for the dedication of the post office as the Sergeant Cory Mracek Memorial Post Office, Pat contacted Roger Lempke, who worked for Senator Mike Johanns. Though she was initially informed there would be no more post office dedications, Pat heard about other such dedications and contacted Congressman Adrian Smith to ask again.

It went through this time, with the Chadron post office getting its new name on April 17, 2015. The ceremony took place at the National Guard Armory, and members of the 82nd Airborne came out to spend the weekend with the Mraceks.

During the dedication ceremony, members of the 82nd Airborne shared how Mracek was dubbed “Morale Check” because of his positive attitude.

Pat has also been to Fort Bragg a few times, so she met quite a few of them already and hear the other members of Cory’s unit speak about him. She added a barracks room at the fort was named after Cory, and a brick memorializing the three soldiers has been laid at the military museum there. There is also a plaque at Fort Bragg and with the Mracek family, in recognition of Cory’s persistence to get into the 82nd Airborne.

Pat is truly appreciative of Hunt and the display at the Mari Sandoz Center, so the soldiers and their sacrifices are not forgotten.

Choose the gift of giving this Christmas Season

A puppy calendar, ribbon candy, a fuzzing lap blanket...just a few of the simple wishes folks will find on ornaments on the gift trees around …

The 2022 Holiday season is upon us, which means the Chadron Police Department is gearing up for the annual “Shop with a Cop” program. All dona…

Part of the veterans display at the Mari Sandoz Heritage Center are Pat Mracek's Gold Star Mother jackets, as well as the Purple Heart awarded posthumously to her son.