Among her activities in Chadron, people might catch Baker ringing the bell for the Salvation Army during the holidays. 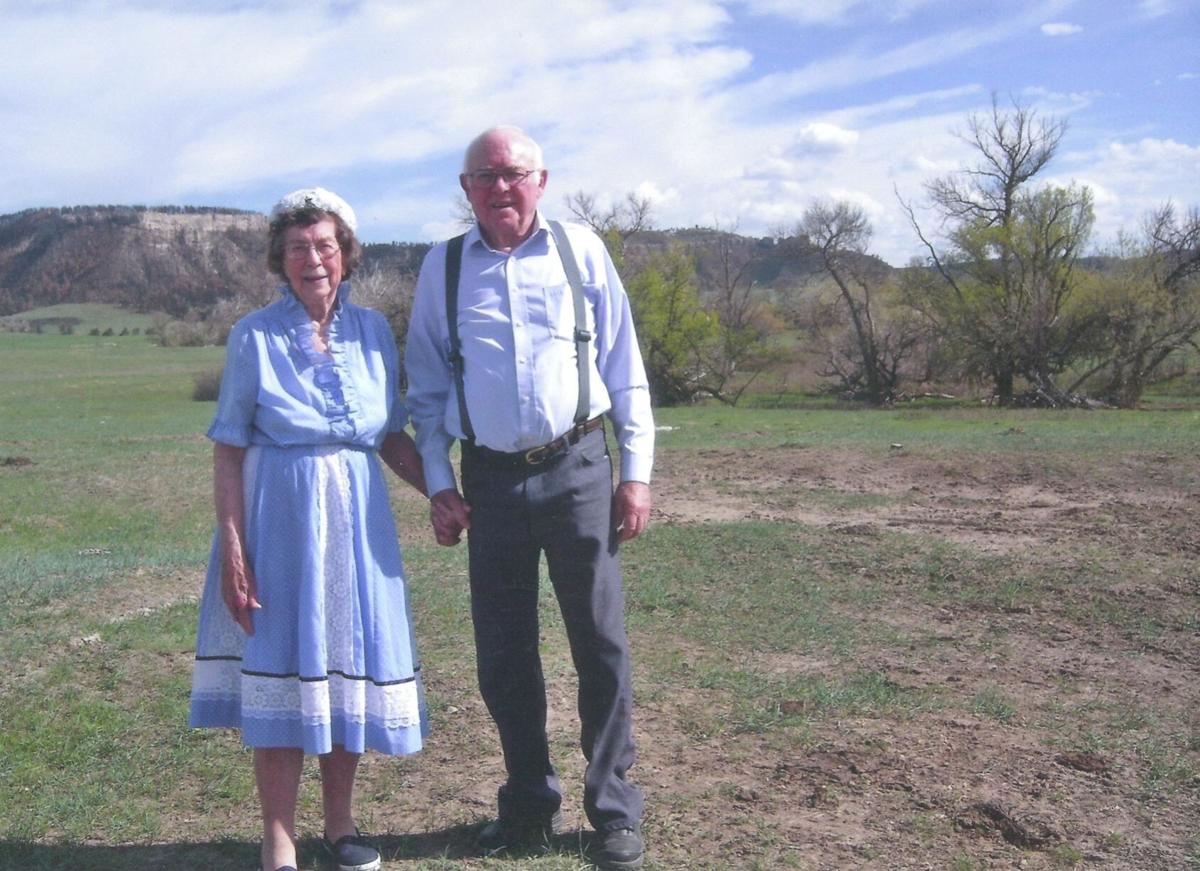 Baker stands alongside Dan Konrath, a friend who regularly brings her lunch from the Chadron Senior Center.

Born on March 1, 1921 in rural Sioux County, Jean Coffee Baker will be celebrating 100 years of age in less than a week. The living room on her main floor serves as her area to eat, sleep and “look at the world” through the house’s large front windows.

Baker was born on the Coffee Homestead where she lived through eighth grade. School was a tiny log structure and she rode horseback four miles every day to get there.

“I can’t believe it,” Baker said of her being nearly a century old. “None of my relatives have lived that long, so I didn’t expect to.” Of her 100 years, the past 33 have been in Chadron after she returned in 1987 to care for her mother, Ermine Coffee. Baker also attended high school and a couple year of college in Chadron in the late 1930s before continuing her education at the University of Nebraska.

She earned her teaching certificate and taught for a couple years in York before marrying Robert Fossland in 1942. The couple had four children — three boys and one girl. With Fossland in the military and planning to get shipped out overseas, Baker accompanied her husband out to California but didn’t stay long after he shipped out. She was pregnant and chose to return to Chadron to have her first son, Robert, Jr. “I sure hope he gets to come up here the first of March,” she said.

Bakers other children are daughter Karen, and sons Eric and Guy. Though Eric died after falling from a roof and breaking his neck, prior to his passing he had two children; Guy had four, and Karen had two.

After Fossland was out of military service, the couple moved to Tucson, Ariz., where he worked in animal husbandry “with all the animals in Arizona, mostly cattle,” Baker said. They were there at least 20 years, she added, “and I got married to somebody else.”

Her second husband, Dan Fillenberg, a motorcyclist and grade school teacher who had ridden all over the United States. Baker was working for a doctor at the time. The two of them had bought a five-acre plot out in the desert and built their own adobe house on it.

Her second husband passed in an accident after 10 years of marriage, Baker said, and she was glad to have a job with a doctor but decided she wanted to get married again. While out for lunch one day, she met Ed Roeding, who had six kids. Rather than just dating, the two decided to attend a program called Parents without Partners to “look the women over and look the men over, and we got back to each other and got married.”

Roeding moved his former wife out of the house she was staying in and closer to a hospital, and he and Baker moved into the newly-vacated house after returning from a trip to Costa Rica. Before returning to Chadron to care for her mother, Baker would divorce from Roeding.

“I got married again,” she said, this time to railroad retiree Don Baker, who had eight kids.

Of her most recent years in Chadron, Baker has been a member of the Dawes & Sioux County Retired and Senior Volunteer Program (RSVP) program for over 32 years. During that time with RSVP she accumulated 7,045 lifetime volunteer hours, almost half of those hours served after she turned 90.

As to how she got into volunteering in Chadron Baker said, “I was doing the same thing in Tucson, where I lived, until I came home to take care of my mom. It was perfectly natural to come up to RSVP and see what I could do. They always had an opening, there was always something to do, and I enjoyed that.”

In the last ten years as a member of RSVP, Jean has volunteered at Meals on Wheels, Bread Basket, church activities, Dawes County Museum, the Aging Class at Chadron State College, and she is a first class bell ringer for the Salvation Army. Before COVID curtailed her activities, Jean would often arrive for her volunteer service on her motorized scooter with her little dog along for the ride. “Volunteers like Jean are such treat” said Rachel Johnson, Director of Volunteer Services-RSVP at Northwest Community Action. “She gives so willingly of her time, and you can always pick Jean out of a crowd because she has the most fabulous hats - she wears a different one to each event!”

Ever since she’s been a senior, and prior to the COVID-19 pandemic, she at lunch and played Bridge regularly at the Chadron Senior Center. She also worked at the YWCA, but never taught again, except if someone wants to learn Bridge.

She credits her long life to taking care of herself, exercise, eating healthy and not drinking alcohol.

In honor of Baker’s birthday, there will be a puzzle sale will be at the Chadron Senior Center parking lot from 10 a.m. to 1 p.m. on Saturday, Feb. 27. Over 100 puzzles will be available for a goodwill donation. All proceeds benefit Circle of Light and Feed a Senior in Need.

The latest meeting of the Dawes County Commissioners in regular session was at 9:01 a.m. Feb. 23. The meeting was also set up on zoom and call…

HAY SPRINGS –While most middle and high school students in Hay Springs say they plan to attend college or trade school after graduation, many …

Northwest Nebraska: No Better Direction to find yourself

They say it’s all about the journey, and in Northwest Nebraska that’s certainly true.

For those who have attended the high school musical the past couple years, or attended a Chadron Cardinal game where she performed The Star-Sp…

Chadron State College students in the fields of art, communications, and marketing had the opportunity to learn from seasoned professionals in…

Steve Cleveland, President and CEO, and the board of directors of First National Bank of Chadron announced a merger with its’ affiliate Homest…

Among her activities in Chadron, people might catch Baker ringing the bell for the Salvation Army during the holidays.

Baker stands alongside Dan Konrath, a friend who regularly brings her lunch from the Chadron Senior Center.