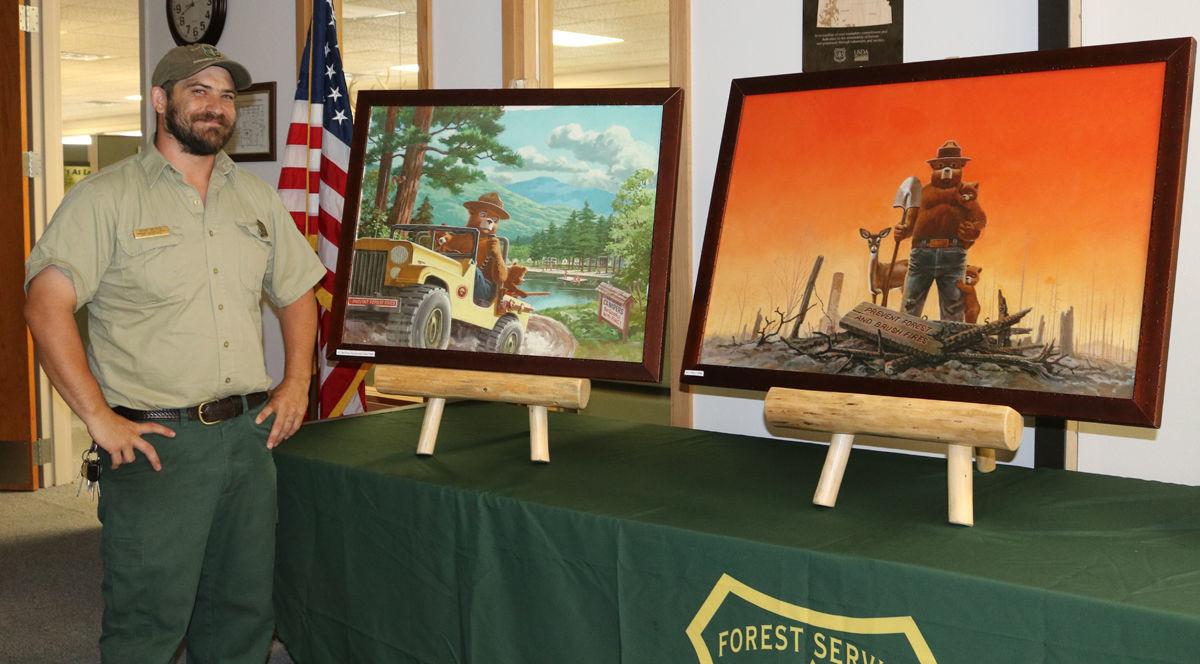 Ryan Means, the Hudson Meng Research Center Manager, looks over two of the 16 pieces celebrating Smokey Bear's 75th birthday. The pieces are part of a traveling display and are now at Hudson Meng for a limited time. 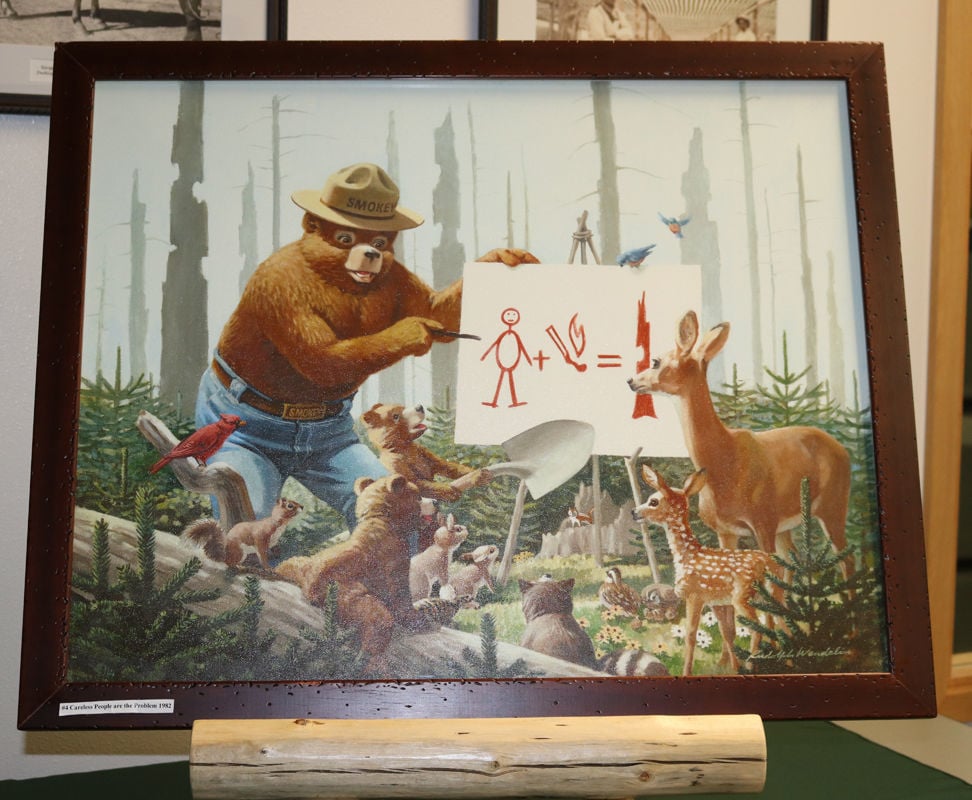 This 1982 people, titled "Careless People are the Problem," is one of 16 that will be on display at Hudson Meng to celebrate Smokey Bear's 75th birthday.

An iconic symbol in forest fire prevention turns 75 this week, and northwest Nebraska residents have a unique opportunity to celebrate Smokey Bear’s birthday.

The Hudson Meng Education and Research Center is currently hosting the Smokey Bear Art Show, a traveling exhibit from the National Agricultural Library. Unveiled today during the center’s normal business hours, the 16 replica portraits by artist Rudolph Wendelin will remain at Hudson Meng through Aug. 18. Center Director Ryan Means was thrilled to learn that Hudson Meng was selected for the traveling exhibit, an event that has added uniqueness for Hudson Meng since the exhibit will be on site for Smokey’s actual birthday, Aug. 9.

“Not every forest has the opportunity to showcase the display,” Means said last week in Chadron while taking possession of the exhibits, which had previously been on display in Wall, S.D. The added bonus of hosting the exhibit during Smokey’s birthday is a blessing, he said.

The center has special plans to mark Smokey’s 75th birthday with activities Aug. 9-10 from 11 a.m. to 3 p.m. each day. Events will include wildfire safety and prevention activities, demonstrations by the Pine Ridge Ranger District fire crew, an Agents of Discovery mobile game challenge and a birthday party complete with cake. Smokey will stop by each day at 1 p.m.

Families or children who complete Agents of Discovery Smokey Bear mission during the two-day event will earn special prizes. The app is available for download for free in both Google Play and iOS App. Be sure to download the app prior to arriving at Hudson Meng as there is limited cell service on site.

“The people who really like Smokey Bear flipped out about it,” said Jeremiah Hyslop who helped transfer the exhibit from Wall to Hudson Meng. Smokey is the image people think of when they think about the U.S. Forest Service.

“I get warm fuzzy feelings – pun intended – when I look at all of (the portraits),” Hyslop said.

The Forest Service started its fire prevention efforts in 1943, with Smokey Bear making his first appearance the next year. The iconic, more humanized image with jeans, shovel and ranger hat, was created by Wendelin, who served as the full-time artist on the campaign, creating more than 100 images of the famous bear. A Kansas native, Wendelin studied architecture and art before joining the USFS as an illustrator and draftsman. He served in the Navy during World War II and returned to the USFS after his discharge; he was awarded a Medal of Honor from the Daughters of the American Revolution in 1998 for his work on the campaign.

What many people may not realize is that after Wendelin’s creation, a real bear injured in a forest fire was named after the classic image.

“He became a mascot from then on,” Means said. The bear cub was rescued in 1950 after a forest fire in Capitan Gap in the Lincoln National Forest in New Mexico. Badly burned, he was tended to and eventually transferred to the National Zoo in Washington, D.C., where he lived until his death in November 1976. He is buried in Smokey Bear Historical Park in New Mexico.

Hudson Meng staff will also lead an education talk at Fort Robinson Friday at 7 p.m. in honor of Smokey Bear. Located at the picnic shelter next to Soldier Creek Campground, the rangers will present “History of Smokey Bear” and offer a family-friendly activity.

Hudson-Meng is open Wednesday to Sunday from 9 a.m. to 5 p.m. Admission fees still apply during these two weeks. The Hudson-Meng parking lot, trails, and grounds are open seven days a week.

A journey from Holland to rural Nebraska

Frederika “Fredi” Sommerville moved to Chadron in 1989 with her children, Jason and Shawn Sommerville and Danny Case, but the road here had qu…

Since late July, when Australia’s fire season began, the country has been ravaged by wildfires. In addition to killing nearly 30 people and de…

Ryan Means, the Hudson Meng Research Center Manager, looks over two of the 16 pieces celebrating Smokey Bear's 75th birthday. The pieces are part of a traveling display and are now at Hudson Meng for a limited time.

This 1982 people, titled "Careless People are the Problem," is one of 16 that will be on display at Hudson Meng to celebrate Smokey Bear's 75th birthday.