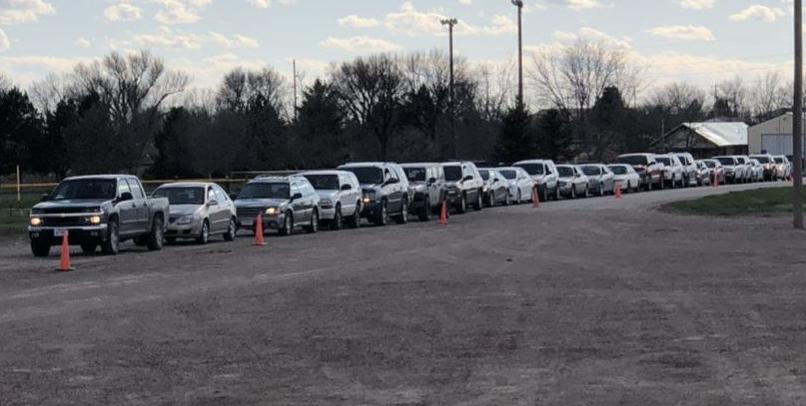 A line of vehicles stretches from the Dawes County Fairgrounds to Main Street for the NCAP's Drive Thru Food Pantry. 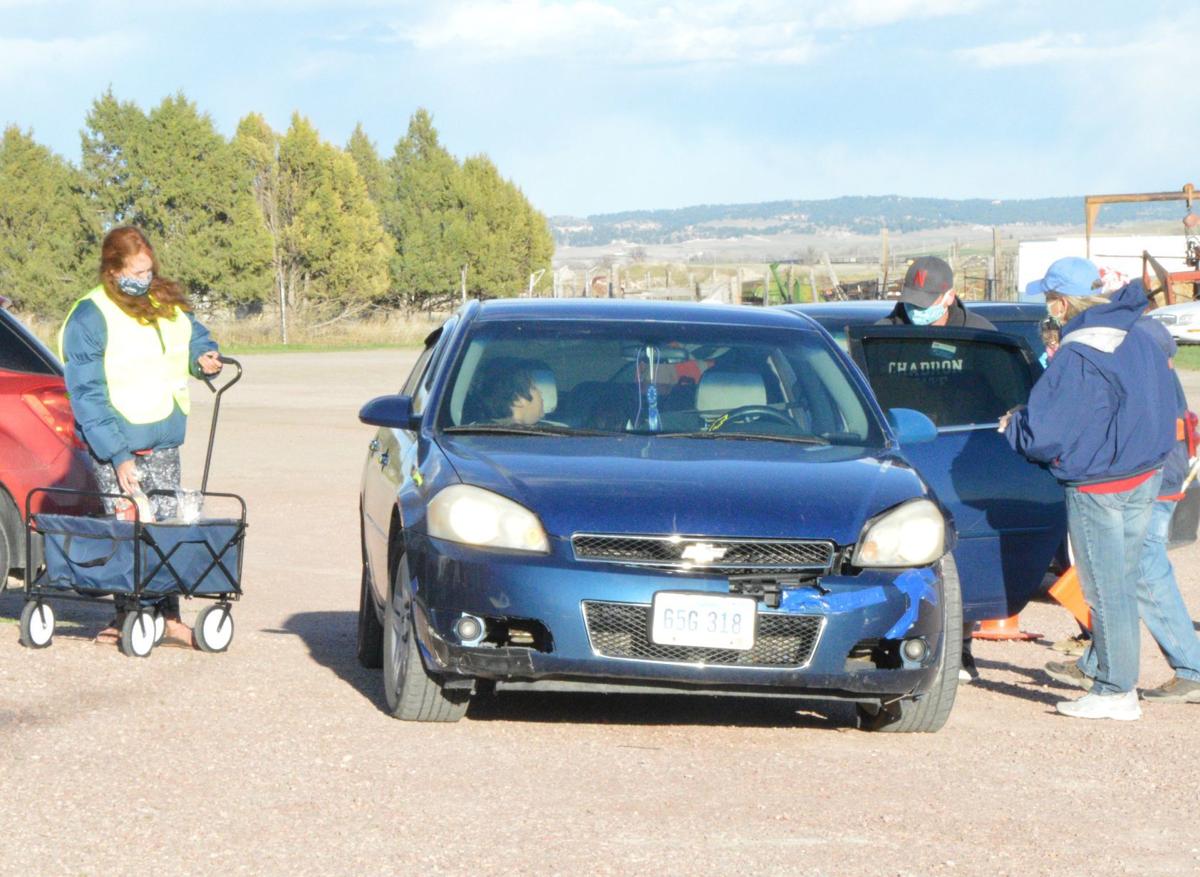 Twenty-four RSVP and community volunteers came out for Northwest Community Action Partnership's (NCAP's) first ever DRIVE THRU mobile food pantry.  Two hundred twenty-two families were served in less than two hours. The line of cars extended from the baseball fields off of Main Street, passed the fairground buildings and looped back to the buildings in an extended horseshoe. Many families commented on how quickly they moved through the procession. NCAP also provides a regular food pantry at 127 West Second Street three days a week.  For more information on food pantry hours and other emergency services go to ncap.info and click on COVID Updates.

During their Monday night meeting, the Chadron City Council authorized expenditure of an additional $30,000 in LB840 Economic Development Funds for micro-grants for local businesses.

During the council’s April 20 meeting, $30,000 in LB840 funds was authorized for micro-grants of up to $1,000 each for businesses, to be used for operating expenses. However, 74 applications for the grants were received. Of these, 69 were deemed eligible.

Though the authorized LB840 funds would provide for a grant of $1,000 each to 60 of the eligible applicants, and there was some discussion to possibly using another $9,000 to provide the same amount for the remainder, council approved a pro-rated amount of $869. Using the pro-rated amount also allows funds to be distributed more quickly to the 69 eligible applicants. The council later voted to award the micro-grants

A second measure will allow the community to help out local businesses, as a resolution was approved to authorize expenditure of (P)ACE Funds for an incentive program for gift card purchases.

Northwest Nebraska Development Corporation (NNDC) Executive Director Deb Cottier explained there has been development in guidelines for what is being referred to as a “magic multiplier gift card program.”

“The point is to generate some additional revenue coming into the store and some future business, all at the same time,” Cottier said. “They get double the benefit as the business owners, and the customers can help support these businesses by purchasing gift cards they will use in the future.”

There are some rules to the program, Cottier said, including a maximum $5,000 being used for the program. Each business is limited to a total amount of $300, to discourage people buying large gift cards and using up the funds more quickly. Also, people are limited to buying one gift card per business per week, and cannot be used for immediate purchase food. Cottier said the intention is to purchase the card and use it at a later date. The program will begin this week, and go until the $5,000 is exhausted.

Also at the meeting, a letter of commendation was presented to Chadron Police Officer Sean Considine and Dispatcher Cassandra Anderson for their life-saving efforts during a rescue call on April 27.

At about 9 a.m. on that date, Anderson received a call regarding a five-year-old child, Noella, who was choking on vomit and not responding. The call was made by the older sister, six-year-old Zoey, while grandmother Lana Mesteth attempted life supporting measures.

Anderson quickly assess the call and dispatched officers to the address. Officer Considine arrived first, immediately ran inside and began working to open Noella’s airway so she can breathe. Noella then began to seize, and Considine chose to transport her to the hospital, which was in close proximity. The officer was met by medical staff who began to assess and administer life-saving aid to Noella, who survived.

The assessment and response from Dispatcher Anderson and Officer Considine, and their immediate life-saving actions, saved Noella’s life.

Council approved the proclamation of May 10-16 as Police Week and May 15 as Peace Officers’ Memorial Day. Under the proclamation, all citizens are encouraged to join in honoring all law enforcement officers past and present, and those who have made the ultimate sacrifice and their surviving families.

Chadron Police Chief Tim Lordino said in 1962 President John F. Kennedy signed public law designating May 15 as Peace Officers Memorial Day, and the week in which May 15 falls as National Police Week. The law was amended by the Violent Crime Control and Law Enforcement Act of 1994, which designated that flags be flown at half-staff on all government buildings on May 15.

A proclamation declaring May as Mental Health Awareness Month was approved. Terri Haynes, Project Manager with Educational Service Unit 13, said it is hoped that public will think of mental wellness as any other checkup, and a person should be able to comfortably go to a mental health check.

During this month, Haynes said, awareness is being raised through sidewalk art and the color green, which represents mental wellness. Everyone is encouraged to wear green, particularly on May 9, which is National Children’s Mental Health Awareness Day. Additionally, C Hill will be lit green this month.

Another proclamation approved was for May 3-9 as Drinking Water Week. Public Works Director Milo Rust noted water is our most valuable natural resource, provides public health and protection and fire protection, and is important for the economy and quality of life.

Rust further added any measure of a successful society, low mortality rates, economic growth, productivity and public safety are related to access to public water. Each citizen is called upon to protect water sources from pollution, practice water conservation and get involved with water issues.

Rachel Johnson, Director of Senior Volunteer Services, spoke to the Retired and Senior Volunteer Program (RSVP) program and Northwest Community Action Partnership (NCAP). The RSVP program was active until March, Johnson said, and in the past year volunteers put forth about 23,000 hours of support for the city and surrounding area.

The focus is largely on food security, but the disaster preparedness team has also been active in preparing for any emergency that would bring volunteers to the area to do the tasks needed in a disaster recovery. Volunteers are also active in nearly 50 sites in Dawes and Sioux County, and have been very active in nutrition sites including last week’s mobile food pantry at the Dawes County Fairgrounds.

As for NCAP, Johnson said it is in the business of helping those in poverty, and there has been a great uptick in those needing assistance. She noted the Head Start program had done well in providing online classes, touching base with students and delivering food to families.

The Community Services department of NCAP is actively reaching out to those who are struggling with paying their rent or utilities to provide assistance through resources. One of these is the Salvation Army Fund, which saw a banner year in 2019 with more than $17,000 raised. Other services being provides include the food banks and diaper bank.

Anyone who needs assistance can call 308-747-2200. The office is also located in the Marketplace, 127 West Second Street. Those who would like to donate can call 308-432-3393, though canned food donations are somewhat discouraged at this time to avoid possible disease transmission. Johnson said financial support is key, because it can be used for the greatest need.

Chadron State to pay $900,000 in settlement of Title IX lawsuit

One of Chadron’s top golfers moves back to hometown

It will be 50 years ago this fall that Dale Williamson’s college golf career got off to a fantastic start.

According to Dawes County Court documents, a complaint was filed May 20 against Sheriff Karl Dailey for alleged official misconduct, a Class I…

Chadron State, Peru State, and Wayne State Colleges will welcome students back to campus one week earlier for the 2020 fall semester and end t…

After a scare a couple weeks ago, Dawes County received confirmation of the first official case of COVID-19 in the county.

The number of COVID-19 cases in Dawes County was officially back down to 1 after a coding error on the state list and map was corrected. The c…

Members of the Dawes County Veterans Honor Guard recognized those who have died in service of the United States Armed Forces, during Memorial …

A line of vehicles stretches from the Dawes County Fairgrounds to Main Street for the NCAP's Drive Thru Food Pantry.

Twenty-four RSVP and community volunteers came out for Northwest Community Action Partnership's (NCAP's) first ever DRIVE THRU mobile food pantry.  Two hundred twenty-two families were served in less than two hours. The line of cars extended from the baseball fields off of Main Street, passed the fairground buildings and looped back to the buildings in an extended horseshoe. Many families commented on how quickly they moved through the procession. NCAP also provides a regular food pantry at 127 West Second Street three days a week.  For more information on food pantry hours and other emergency services go to ncap.info and click on COVID Updates.