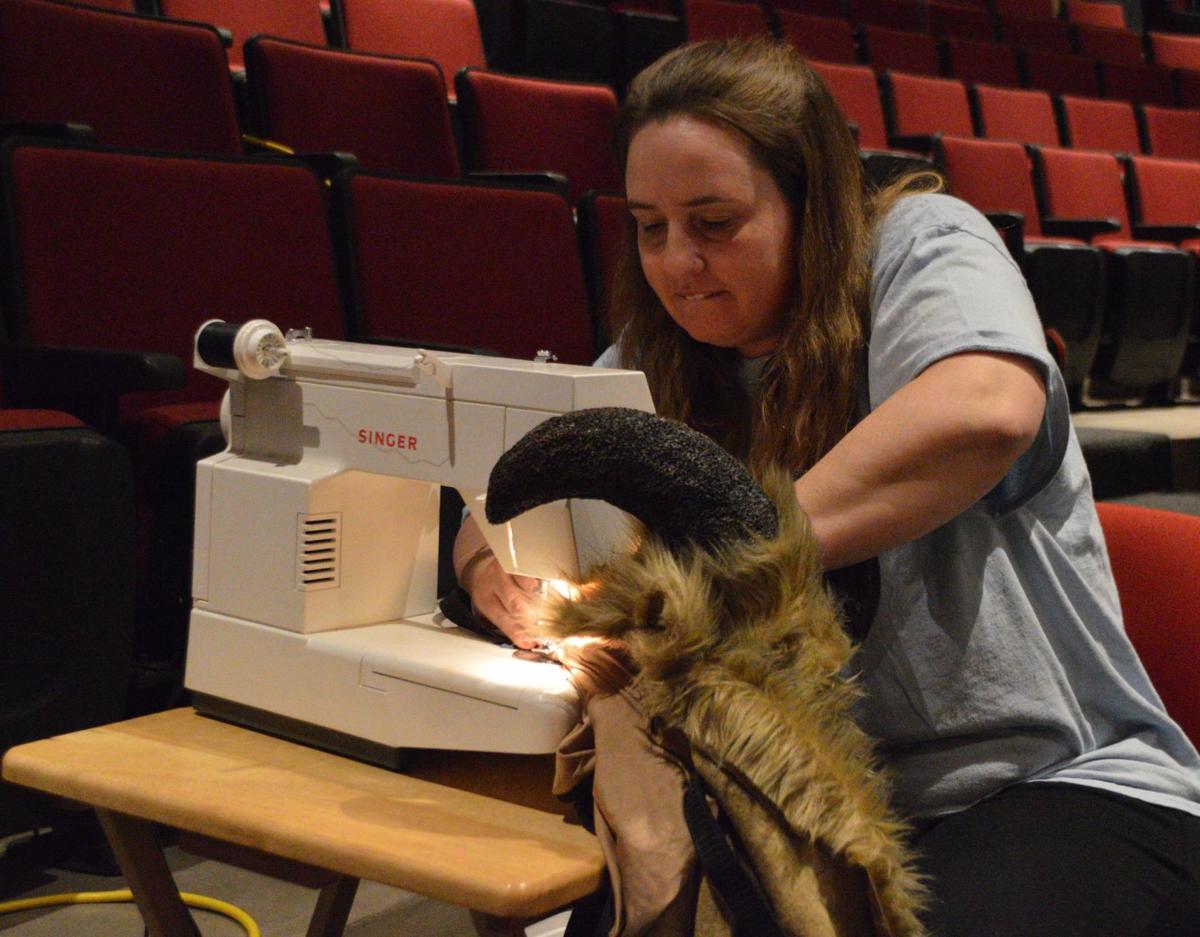 While students perform on stage, Kristol Cummings is hard at work on costumes. 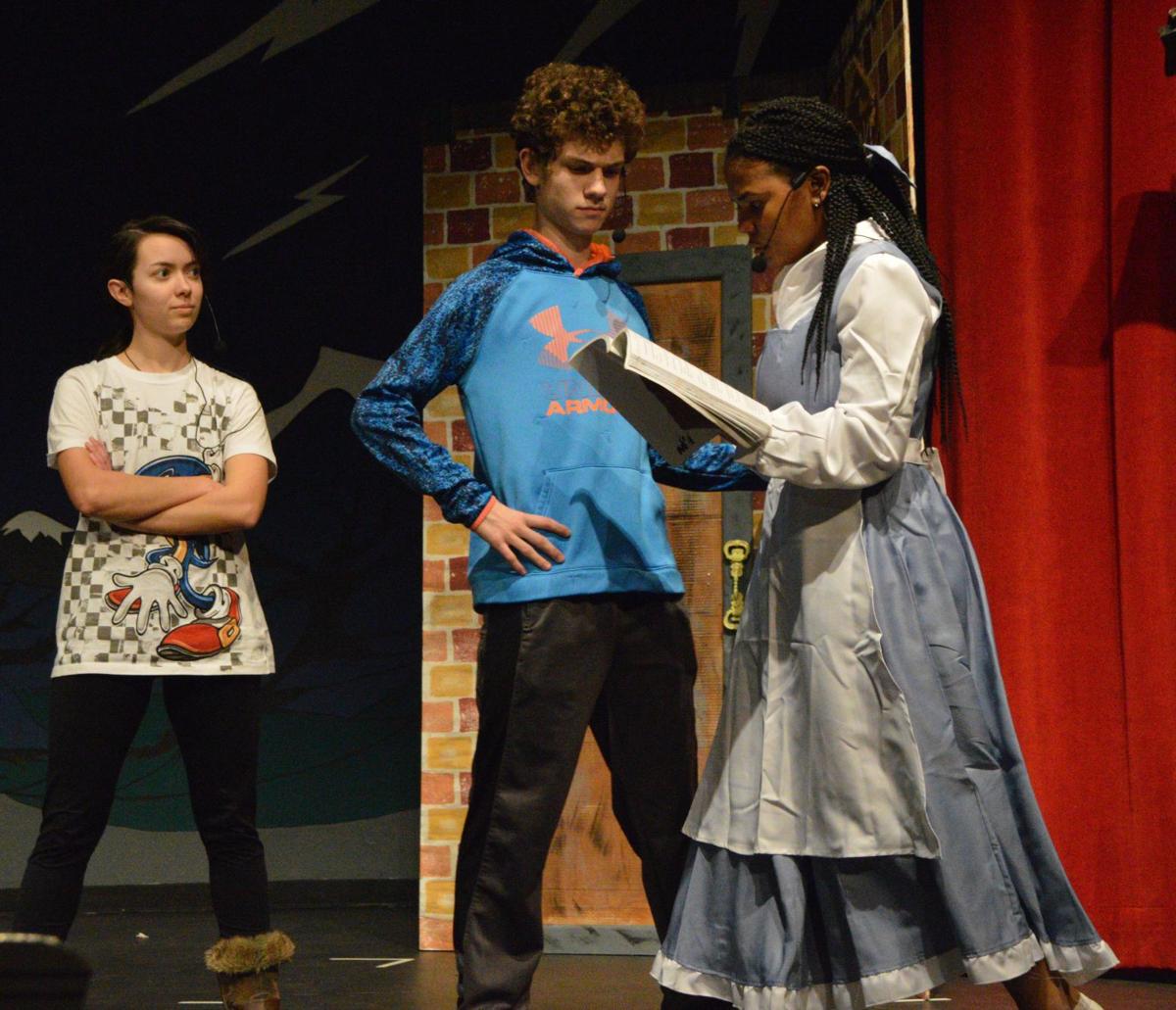 Gaston, played by Drew Milburn, does his best to woo Belle, played by Lateisha Ngoi, as Lefou, played by Kennady Stack, looks on. As many of the costumes are fragile, a lot of students have been rehearsing in street clothes. 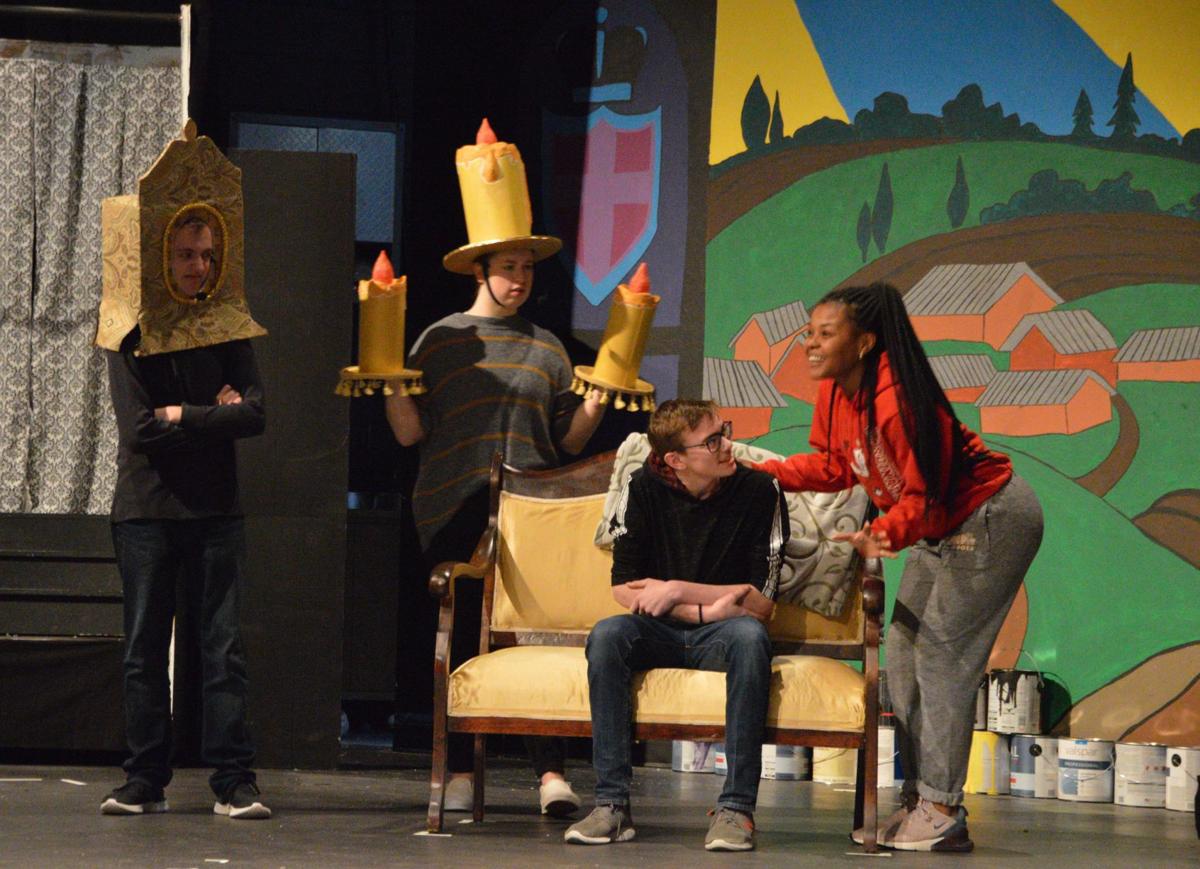 Maurice, played by Spencer Blundell, has a seat inside Beast's castle as he's tended to by, from left: Cogsworth, played by Aidan Dressel; Lumiere, played by Maddie Sandstrom, and Babbette, played by Jayrah Ngoi.

A tale as old as time will hit the stage at the Chadron High School auditorium on Friday, Saturday and Sunday, as students present “Beauty and the Beast” for the 2020 spring musical. Those familiar with the popular animated Disney telling of the story will recognize many of the songs in the production, though there are also plenty from the Broadway show.

A week before opening night, students are busy making sure they’ve got their lines—spoken and sung— learned, the action down and stage transitions flowing smoothly, with some assistance from Chadron High Vocal Teacher and Director Wendy Mahr of course. Auditions were before Christmas break, providing necessary time for students to get into their roles.

All total, the cast and crew total more than 30 students bringing the story to life. Additionally, the show will feature a live pit orchestra. But beyond what people see on stage this weekend, there’s plenty of work done to get the show ready for when the curtain goes up.

Mahr said the students are doing great with all the work put upon them. “They do it all,” she said, noting she has a Stage Prep class in which they design and build the set. With no fly or drop system at the auditorium, they use what’s known as “the big ugly white thing,” a large wall they paint for every show. The mural for Beauty and the Beast is designed by Travis Hencey. When the show’s over, they will paint the wall again.

Also in the auditorium watching the practice is Kristol Cummings, who has designed and made about 20 costumes for the performance. She said it’s a lot of guesswork first, to get as much done as she can. She then takes and uses student measurements and has them try on the costumes, and makes adjustments as necessary.

Cummings has helped with costumes every year Mahr has done the musical, designing for Fiddler on the Roof, Grease, Shrek, and Guys and Dolls in addition to this year’s show

Cummings said she loves “seeing it all come together in the end. I love watching it on stage, and I love seeing the kids’ reactions when I bring them something to wear.” Some are excited with what they get to wear, while others aren’t so enthusiastic.

Cummings has also helped with some set pieces, including the baker’s shop, the west wing of Beast’s castle, Belle’s room, a cottage and a canvas painting of Beast’s head.

“I do it for the kids, that’s for sure,” Cummings said. “My kids have been in it every year so far, that’s really how I got started.” Her daughter, Bristyn, is a senior, so next year will see if Cummings is again helping students look their parts.

A housing project that began last year will result in a new residence in town, with more to come by the end of the year.

Board approves motions regarding COVID-19

Monday night, the Chadron Public Schools Board of Education — with board member Tye Pourier among those in attendance via videoconference — ap…

Schools closed through May 1

After consultation with COVID-19 Unified Command, it has been determined that all schools in the Nebraska Panhandle will be closed through Fri…

A South Dakota woman is scheduled to be sentenced next month in northwest Nebraska for the drunken driving crash death of a 6-year-old girl.

For Erich and Mary Landen, Chadron has always been home, though to be technical Erich moved here when he was four. The two were high school sw…

When mentioning the word quarantine, several thoughts come to mind. The most prominent are likely “Do I have enough food and supplies in my ho…

Though not on the formal agenda, the Chadron City Council took the time during their March 16 meeting to address the growing concerns regardin…

Recent testing for COVID -19 is negative

The test result for the parent of the Chadron student has tested negative for COVID-19. No further testing for COVID-19 in this situation is needed.

Did you now that there are Girl Scouts in more than 140 countries around the world?

While students perform on stage, Kristol Cummings is hard at work on costumes.

Gaston, played by Drew Milburn, does his best to woo Belle, played by Lateisha Ngoi, as Lefou, played by Kennady Stack, looks on. As many of the costumes are fragile, a lot of students have been rehearsing in street clothes.

Maurice, played by Spencer Blundell, has a seat inside Beast's castle as he's tended to by, from left: Cogsworth, played by Aidan Dressel; Lumiere, played by Maddie Sandstrom, and Babbette, played by Jayrah Ngoi.