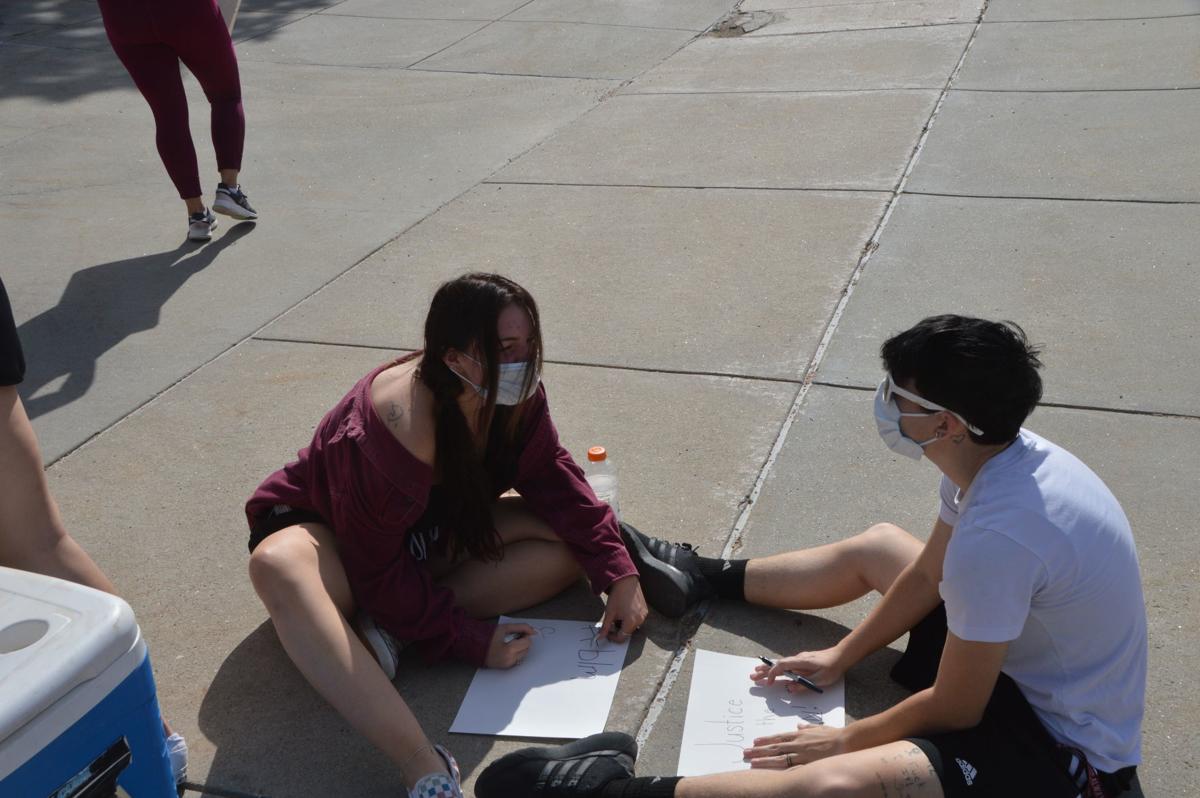 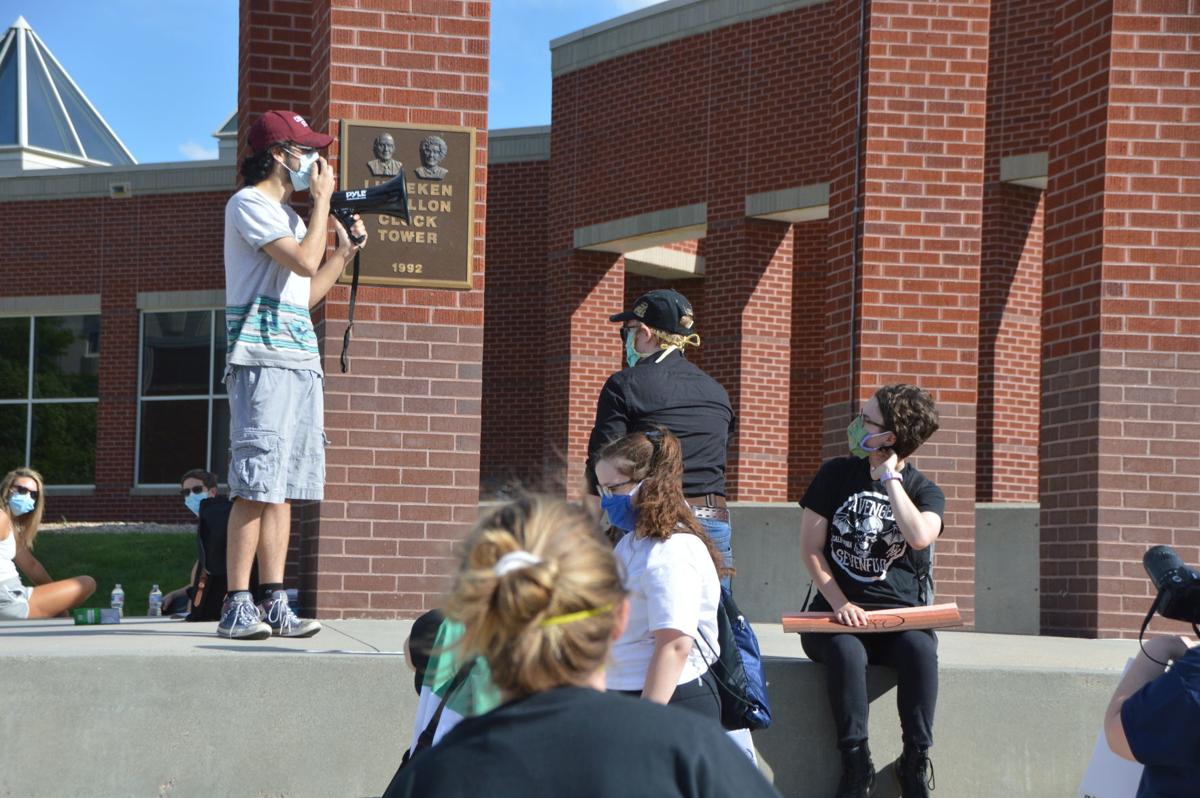 Protesters rally at the Chadron State Clock Tower prior to the march. 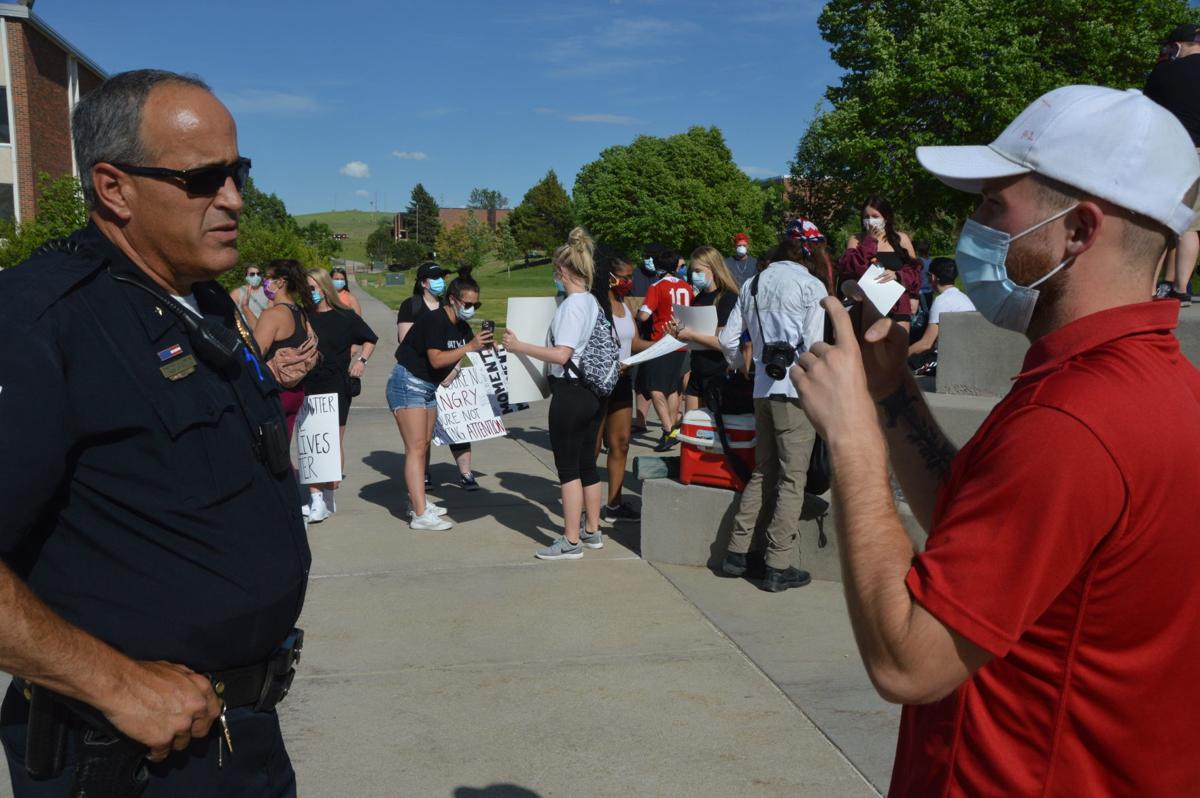 Police Chief Tim Lordino is interviewed at the CSC campus. Lordino and other law enforcement officers provided a safe escort during the march, as well as water and snacks. 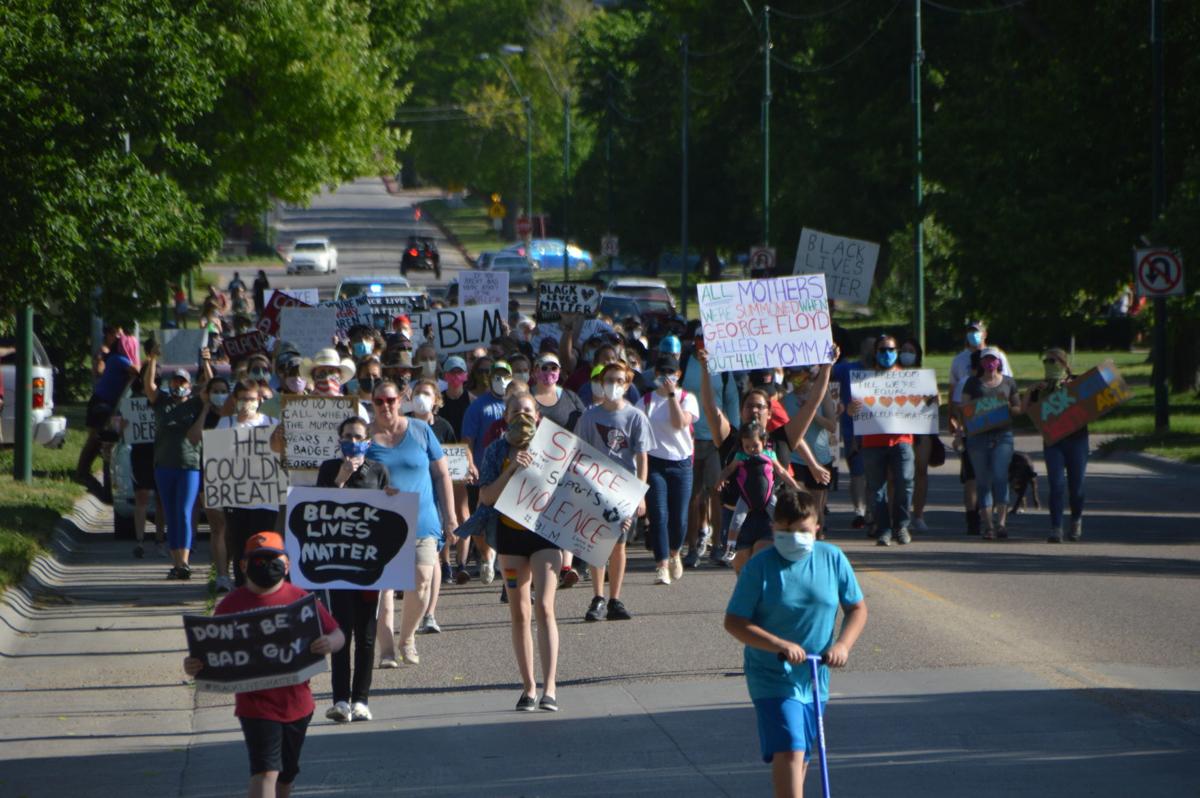 As the march made its way down Main Street, many people came out of their homes to show support, offer water or join the movement. 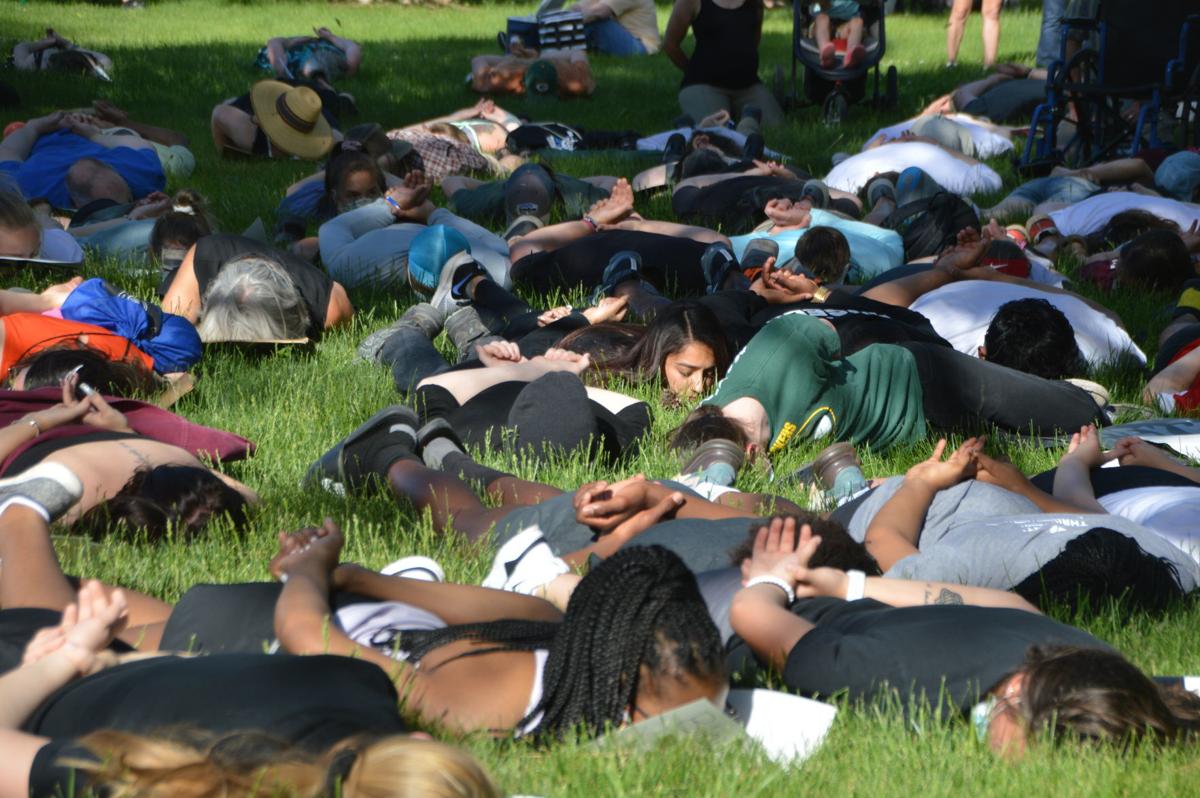 More than 100 people laid on the north lawn of the Dawes County Courthouse, their hands behind their backs, for nine minutes. The time was representative of how long George Floyd lay with a knee on his neck.

The recent death of George Floyd as the result of now-former Minneapolis police officer Derek Chauvin kneeling on his neck has sparked marches, riots, speeches and other movements across the country, advocating for this such as police reform and ending brutality against African Americans.

Among those movements was an estimated 200-300 marching from the Lindekin Clock Tower on the Chadron State College campus, down Main Street to the Dawes County Courthouse. Along the way, marchers included “Black Lives Matter” in their chants, a phrase that has become synonymous with the death of Floyd and other people of color.

Floyd’s death was the spark for this movement, and upon arriving at the courthouse more than 125 people laid on the lawn in silence with the hands behind their backs for nine minutes, about the same amount of time Chauvin knelt on Floyd’s neck. However, many of the signs held by participants named several others who have died as the result of police brutality, and asked people to remember them as well. Still others had a simple message asking for prayers, healing and kindness toward one another.

Marchers also recorded a short video clip for the song “Another Black Man Dead” by Ali Tomineek. The artist was part of the Martin Luther King Jr. Day activities at CSC on Jan. 20.

Among those organizing the local movement were Trajan Garcia and Brittney Peters.

Garcia explained he is something of a political junkie and keeps up on current events. “With everything going on,” he said, “it made me mad that small towns like this — we don’t suffer from police brutality like the bigger cities do — but there’s definitely issues in the community not being very accepting of a lot of the people of color like we have on [the Chadron State] campus.”

Garcia began with hanging a few posters around town and people responded. The more he and Peters spoke to whom they personally knew, who were upset with the sparking events, the more they realized they could do something about it.

Peters said, “I ended up making a group chat with about 12 people to start with.” Within three days, those 12 got the word out and the movement started to grow. She further added the short time frame was due to the Wednesday afternoon timeframe working for all those involved, and the push to do something sooner rather than later.

Garcia added, “A lot of it, I think, also was the fact that we weren’t terribly confident a lot of people were going to show up,” and things were revolving more around the small group.

That small group is what was seen at the clock tower about 20 minutes before the march started and grew to more than 200. Peters added as they marched many people came out from their homes to join them. Garcia said there were others who set up stations with water as well. Garcia and Peters expressed appreciation for everyone who came out and showed support, whether through marching or providing water and snacks.

At the courthouse, Garcia made a few comments as to why they were there and kept time for the nine minutes of silence. Chadron State Professor David Nesheim also spoke, tying the local movement to the American Revolution and the Civil Rights Movement, “to show how it’s not a bunch of senseless violence,” Garcia said. “Obviously, we don’t any violence. As few people as possible getting hurt across the country would be preferred but stuff only gets to this point when you’re at the tipping point.”

A period of time was provided for additional comments, and many shared their personal experiences with racism. Garcia feels the stories shared helped open the eyes of many people. Peters added it was lighthearted as well, and though stories were shared the tellers did well in making the movement a positive thing.

Though there’s plenty in the news about how such movements have turned violent and wound up with people facing off against law enforcement, officers in Chadron provided water and snacks, as well as an escort for the march down Main Street. Garcia said the original plan was to stick to the sidewalks, but officers offered the escort to keep people safe. Chadron State’s Campus Security also made sure no vehicles parked at the college were vandalized.

“We went into this this having a lot of faith and trust in the community,” Peters said.

Neither Garcia nor Peters heard of any anger or violence toward people. “I’m sure there were people that drove by and were annoyed,” Garcia said, “but nobody tried anything, nobody yelled at us, nobody caused any sort of issues.” Peters said she heard some comments that the marchers were going to riot and quickly assured people that is not what they were doing.

Though the event lasted a couple hours, many remained at the courthouse to show their continued support. Marchers were also encouraged to show their support during last Friday’s Cruise Night.

Peters said, “Everybody that was a part of creating this is very excited and wants to do more, so we’re brainstorming on that.”

Garcia noted that, since the Chadron demonstration, people from other communities have reached out for advice on how to organize their own events. He expects to see a lot of support between towns in the coming weeks.

Protesters rally at the Chadron State Clock Tower prior to the march.

Police Chief Tim Lordino is interviewed at the CSC campus. Lordino and other law enforcement officers provided a safe escort during the march, as well as water and snacks.

As the march made its way down Main Street, many people came out of their homes to show support, offer water or join the movement.

More than 100 people laid on the north lawn of the Dawes County Courthouse, their hands behind their backs, for nine minutes. The time was representative of how long George Floyd lay with a knee on his neck.