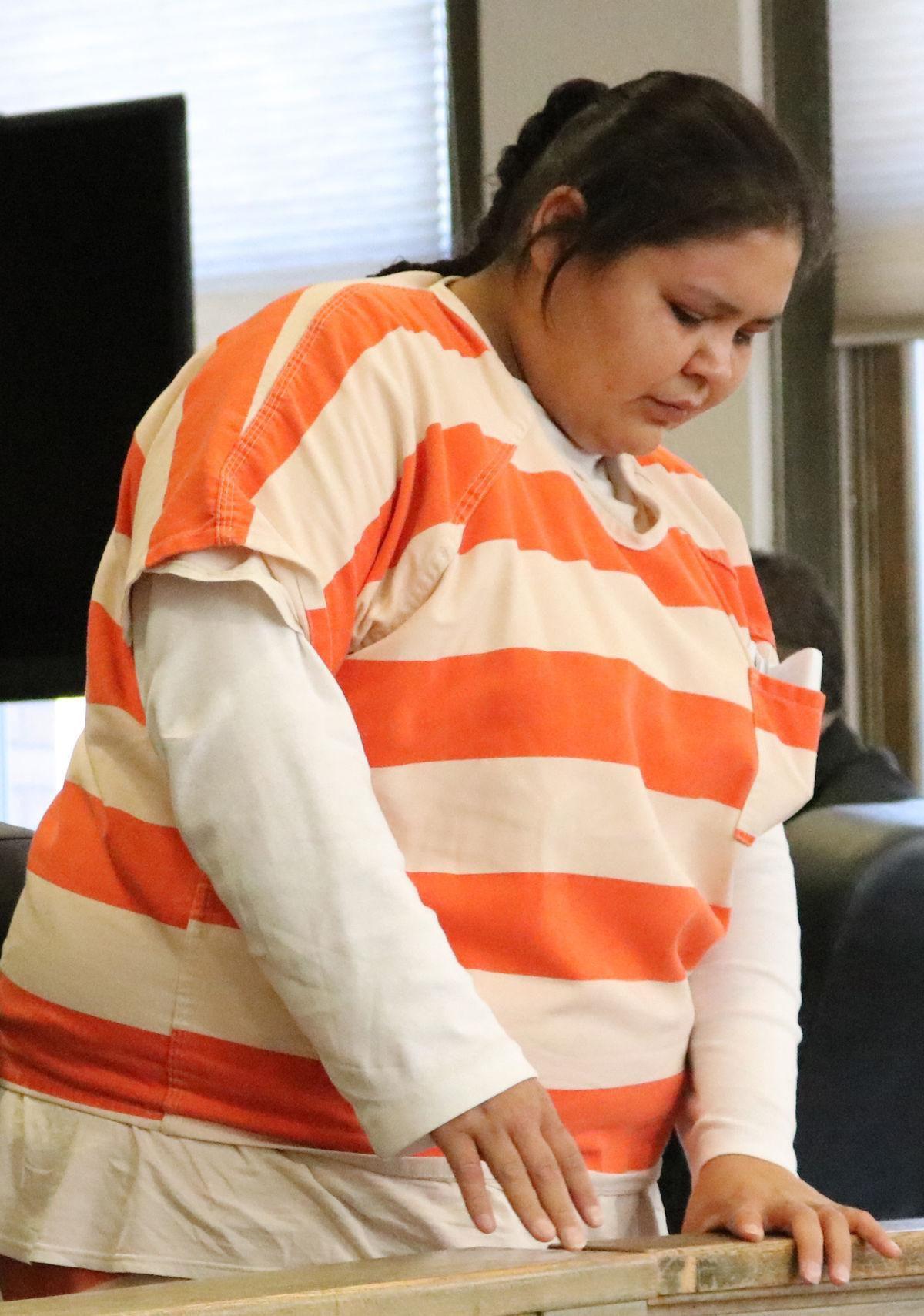 Kimberly Eagle Bull is pictured here shortly after her arrest. 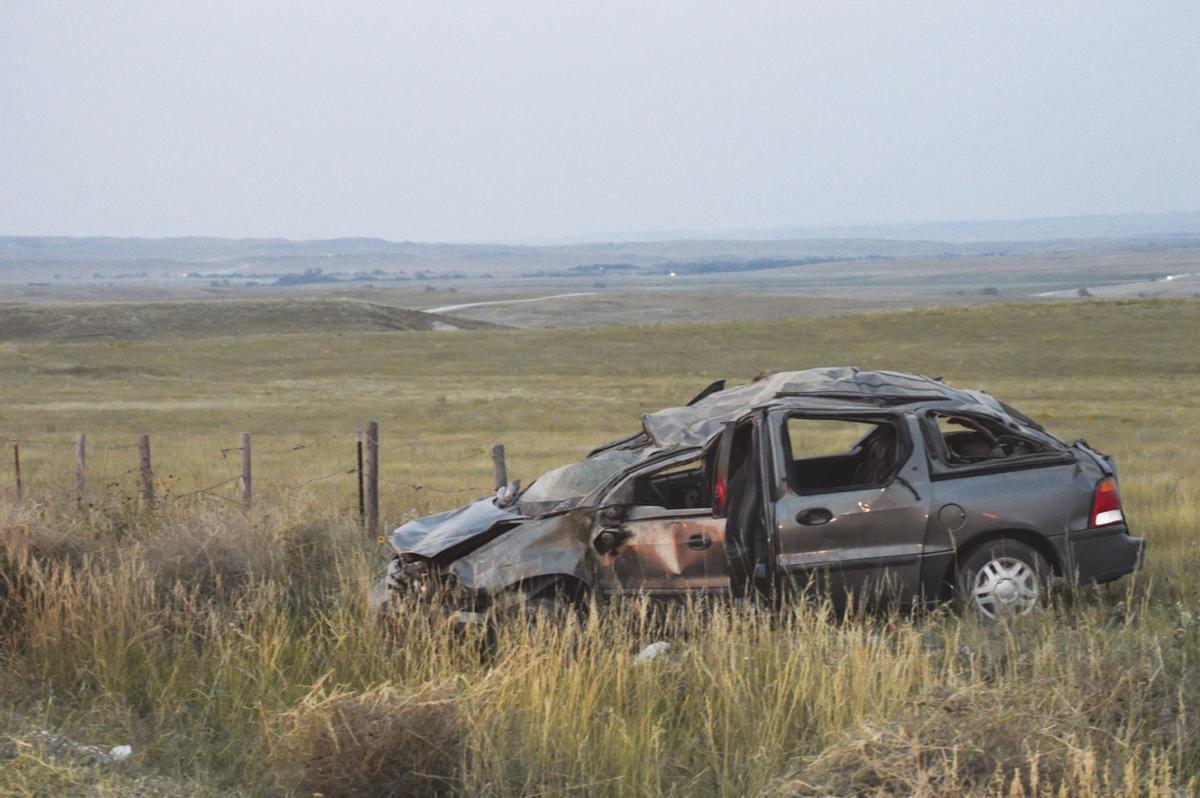 The accident in September 2017 on Slim Buttes Road sent several people to the hospital, and a six-year-old child later died from her injuries.

A South Dakota woman is scheduled to be sentenced next month in northwest Nebraska for the drunken driving crash death of a 6-year-old girl.

Dawes County District Court records state Kimberly Eagle Bull, 35, of Box Elder, South Dakota, pleaded no contest to, and was found guilty of: vehicular homicide, a Class IIA felony; driving under the influence causing serious injury, a Class IIIA felony; and Class I misdemeanors of transporting a child while intoxicated and false reporting.

Prosecutors dropped child abuse charges in return. Her sentencing is set for April 7.

The Nebraska State Patrol has said the crash occurred Sept. 9, 2017, when the minivan Eagle Bull was driving went out of control and rolled on a road north of Chadron. Three adults and three children were taken to hospitals, including two children who were flown to a Denver hospital. The patrol said Christina Roubideaux died there the next day, shortly after 11:30 a.m.

Mike Loutzenhiser, who worked for the Dawes County Sheriff’s Office at the time, was the first officer on scene and  was informed by Fire Chief Jack Rhembrandt that the driver of the vehicle was walking away from the accident. Loutzenhiser found Eagle Bull about a quarter mile from the wrecked vehicle, a fact that he found odd.

In his conversation with Eagle Bull, Loutzenhiser said she changed her story several times about who was driving and where she was seated in the vehicle, and that she left the scene to go to the bathroom.

Dawes County Chief Deputy Jeff Johns was also on the scene, and yelled at Eagle Bull to tell the truth or he would take her to jail. He later testified that he was frustrated and upset, as someone might not have made it and the driver could have possibly fled the scene.

This incident prompted Loutzenhiser to turn off his body camera, while he tried to get Johns calmed down. While the camera was off, Loutzenhiser said he discovered several alcohol bottles at the scene.

Policy regarding body cameras was questioned by defense attorney Jerrod Jaeger, as well as whether Eagle Bull was properly read her Miranda rights.

Nebraska State Patrol Trooper Jared Dusatko conducted a field sobriety test on Eagle Bull and requested a blood draw while she was in the emergency room undergoing treatment for injuries sustained in the crash. During those tests, Dusatko testified Eagle Bull was not under arrest, was not read her Miranda rights nor did Dusatko read the blood draw consent form to her. Under questioning, Dusatko told Jaeger he did not tell Eagle Bull she had the right to refuse the test, or offer to let her sign the consent form.

When Dusatko interviewed Eagle Bull the next day, she waived her Miranda rights, he testified.

The blood test was later ruled illegal, but statements made by Eagle Bull were still allowed into evidence.

A housing project that began last year will result in a new residence in town, with more to come by the end of the year.

Board approves motions regarding COVID-19

Monday night, the Chadron Public Schools Board of Education — with board member Tye Pourier among those in attendance via videoconference — ap…

Schools closed through May 1

After consultation with COVID-19 Unified Command, it has been determined that all schools in the Nebraska Panhandle will be closed through Fri…

For Erich and Mary Landen, Chadron has always been home, though to be technical Erich moved here when he was four. The two were high school sw…

When mentioning the word quarantine, several thoughts come to mind. The most prominent are likely “Do I have enough food and supplies in my ho…

Though not on the formal agenda, the Chadron City Council took the time during their March 16 meeting to address the growing concerns regardin…

Recent testing for COVID -19 is negative

The test result for the parent of the Chadron student has tested negative for COVID-19. No further testing for COVID-19 in this situation is needed.

Kimberly Eagle Bull is pictured here shortly after her arrest.

The accident in September 2017 on Slim Buttes Road sent several people to the hospital, and a six-year-old child later died from her injuries.