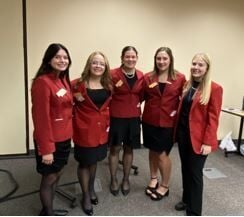 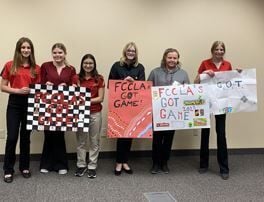 This year, the District 12 FCCLA Officer Team spent many hours preparing for this annual conference. The Officer Team was in charge of organizing sessions and booking speakers that they thought would educate and entertain local members. Wynne Burg and Carrie Howton were two local individuals that hosted sessions which informed members on various topics such as making a difference in your community and solidifying college decisions. FCCLA’s SPOT Officers Ann Ryan and Emily McCune along with State VP of Public Relations Ashlyn Simonson spoke to local members on how to make the most out of their FCCLA membership. District 12 Officers Jena Spady, Kenzie Pourier, Kalli Bridge, and Madisen Meek took time to create a session that helped members elevate their STAR projects.

This year’s keynote speaker was Jeff Fielder, owner/ editor of Nspire Today! magazine. Fielder shared with the members the importance of taking risks. He explained his inspiration for making a new magazine publication and how he decided to take the risk to do something of which he had always dreamed.

Starting tomorrow, Dec. 1, folks will be able to purchase tickets and season passes for next summer’s season at the Post Playhouse. The slate …

Choose the gift of giving this Christmas Season

A puppy calendar, ribbon candy, a fuzzing lap blanket...just a few of the simple wishes folks will find on ornaments on the gift trees around …

The 2022 Holiday season is upon us, which means the Chadron Police Department is gearing up for the annual “Shop with a Cop” program. All dona…