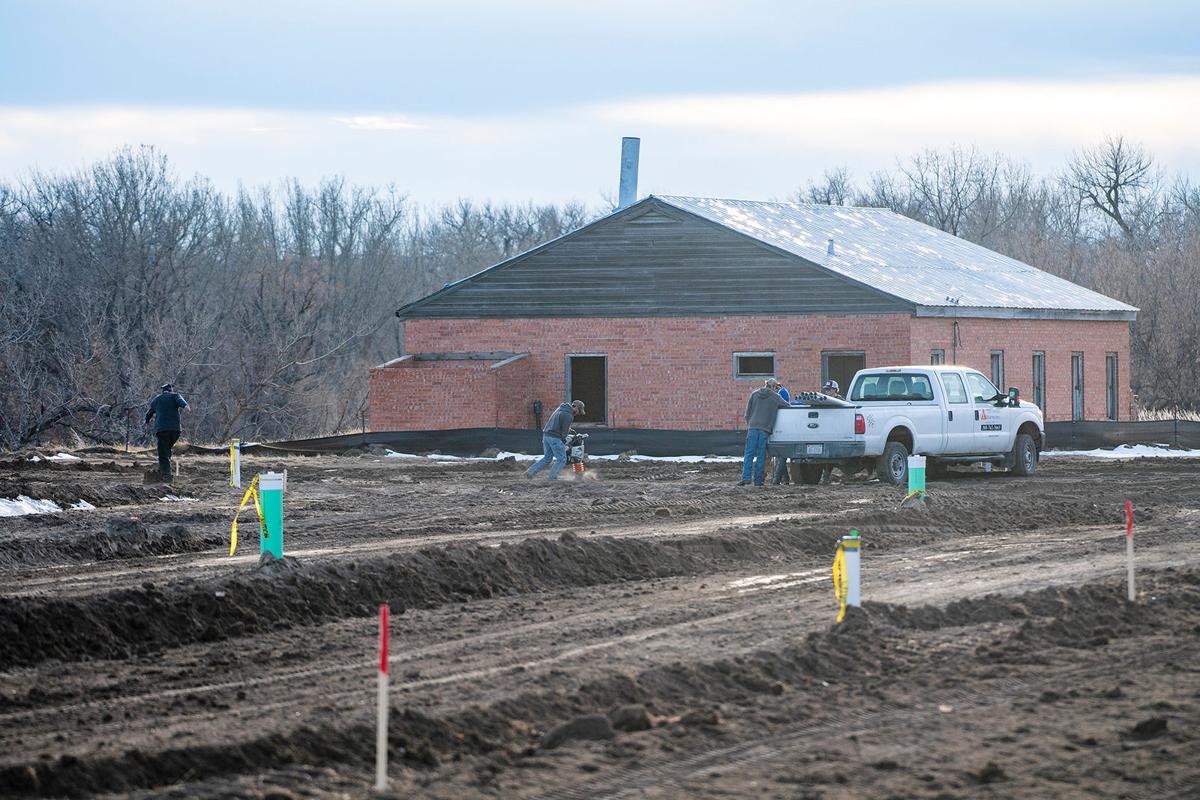 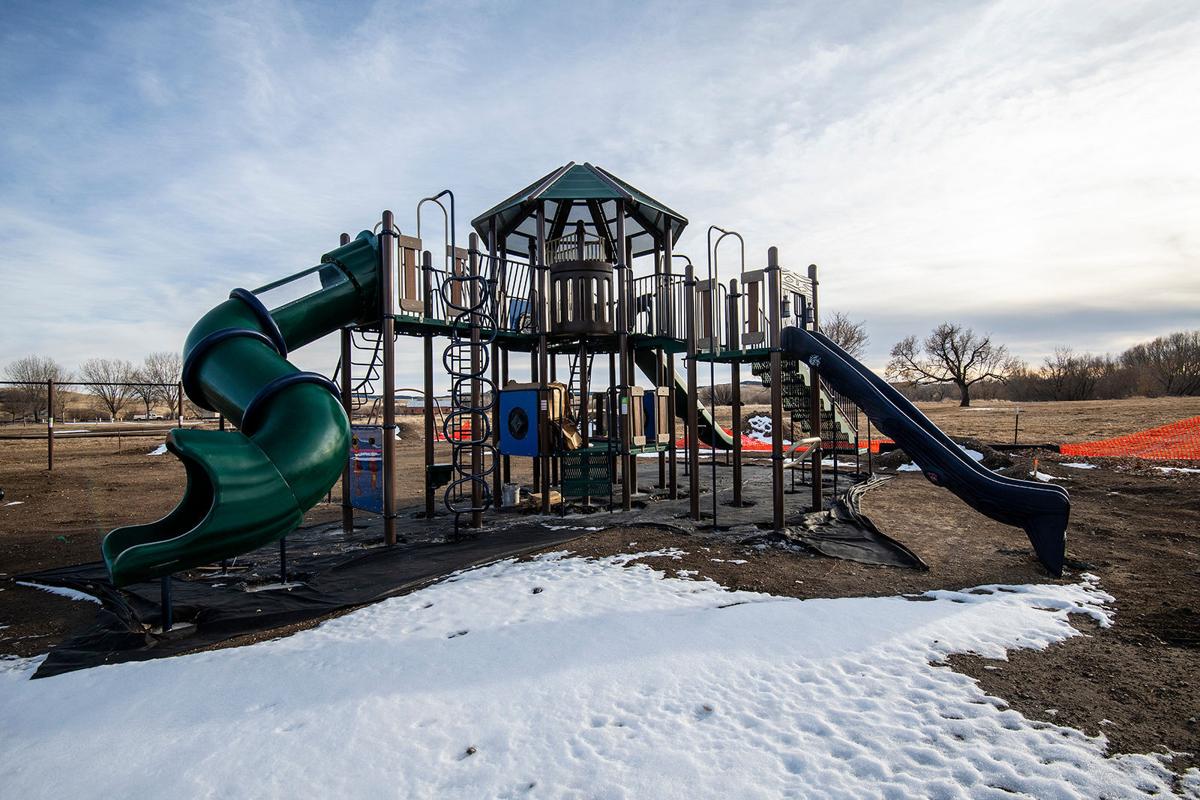 New playground equipment is in the process of being installed near the Solder Creek and Red Cloud campgrounds.

CRAWFORD – There will be more happy campers at Fort Robinson State Park. Or, at least there will be room for them.

The park is adding 42 new pads to the Red Cloud Campground, which serves visitors seeking full hookups for their recreational vehicles and campers. Each pad will have connections for 50-amp electricity, water and sewage. The expansion will more than double the size of the campground, which has 32 pads.

Mike Morava, Nebraska Game and Parks Commission regional park superintendent, said the project was needed because the campground often reaches capacity during the busy season between June and September. He is hopeful the new sites will be ready for visitors this summer.

The estimated $1.27 million cost of the project is being paid for from the Nebraska Game and Parks Commission Capital Maintenance Fund. The fund consists of money collected from taxes on the sale of motorboats and personal watercraft.

The campground is one of three at the park. The Soldier Creek Campground offers 98 sites for everything from tents to RVs, while another campground is exclusive to those who bring horses to the park.

In addition to the expansion, a long list of other improvements is in the works at Fort Robinson State Park.

Many of the items are maintenance on the park’s buildings, most of which date back to the 1800s when the park was a base for the U.S. Cavalry and which now serve as lodging, but there is some new construction, too.

“Providing the modern amenities that park goers want in a place that has so many aging structures is always a challenge, but we take pride in it,” said Jim Miller, park superintendent. “We are certainly thankful to receive the funding that helps us serve the public and maintain the park’s historical integrity.”

Young buckaroos will surely enjoy one upgrade. The park is in the process of adding new playground equipment near the picnic shelter at the entrance of the Soldier Creek and Red Cloud campgrounds. To match the Fort Robinson western theme, the modern equipment will feature replicas of a stagecoach, hay bales and horses, along with many more common items.

The hub of the park, the stately brick building that houses the restaurant, lodge and park headquarters, also is receiving major improvements. Soon to be installed is an upgraded handicapped-accessible ramp leading to the building’s covered porches and new doors for its main entrance. Inside, park staff has been busy uncovering and refinishing the restaurant’s original Douglas fir flooring.

Another project that will certainly be noticed when it gets underway this summer is the painting of the park’s two water towers. Constructed in 1903, the metal towers stand about 80 feet tall and serve as a regional landmark.

Miller said countless other upgrades have occurred for the park’s historical buildings in recent years. He said one ongoing project is modernizing the buildings’ kitchens. Many also have received new siding, doors and sidewalks.

A major funding source for the upgrades is the Game and Parks Capital Maintenance Fund, which is generated from a tax on the sale of motorboats and personal watercraft. For instance, that source is being used for the expansion of the Red Cloud Campground, the $330,000 cost of the playground equipment and $40,000 to paint the water towers. Other funding sources include park permits and fees, grants, Nebraska’s LB309 Task Force for Building Renewal and the Nebraska Outdoor Recreational Development Act.

Elsewhere at Fort Robinson, a project to improve the park’s fishing ponds continues. While the project is not scheduled to be completed this year, work will get underway at Carter P. Johnson Lake and nearby Crazy Horse Pond as part of the second phase of the Fort Robinson Aquatic Habitat Project. The first phase of that initiative resulted in major renovations of Grabel Ponds, Ice House Ponds and the Cherry Creek Pond complex.

Concerns brought to school board

During a packed Monday evening meeting of the Chadron Public Schools Board of Education, the board — with members Boone Huffman and Tye Pourie…

Last weekend saw the 100th anniversary of Chadron State Park. Opening in 1921, it became the first state park in Nebraska and birthed the Nebr…

Two students selected to serve on statewide advisory board

The current exhibit at the Mari Sandoz High Plains Heritage Center, Kapemni: As It Is Above, It Is Below, showcases Lakota constellations, cul…

CRAWFORD – One of the best ways to explore Northwest Nebraska is on horseback, and with the return of the annual Ride the Ridge event June 19,…

The Dawes County Commissioners met in regular session at 9:12 a.m. June 7. The meeting was called to order by Chairman, Jake Stewart. Board Me…

Nearly half of secondary students in the Chadron Public Schools say they are interested in owning a business in the future, according to a rec…

New playground equipment is in the process of being installed near the Solder Creek and Red Cloud campgrounds.