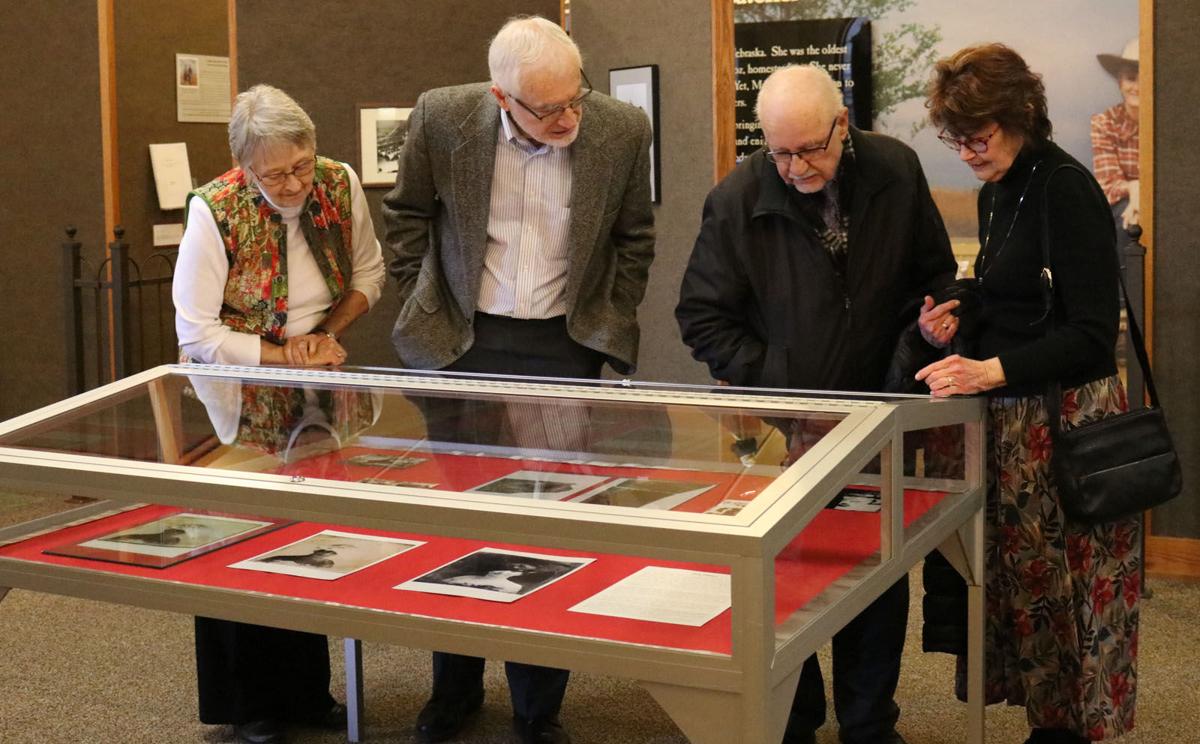 Betty and Norm Martin and Jim and Carol Wright, from left, examine photographs and a few broken glass plates from the Graves Photography Collection at the opening reception for the exhibit at the Mari Sandoz Center in January 2019. 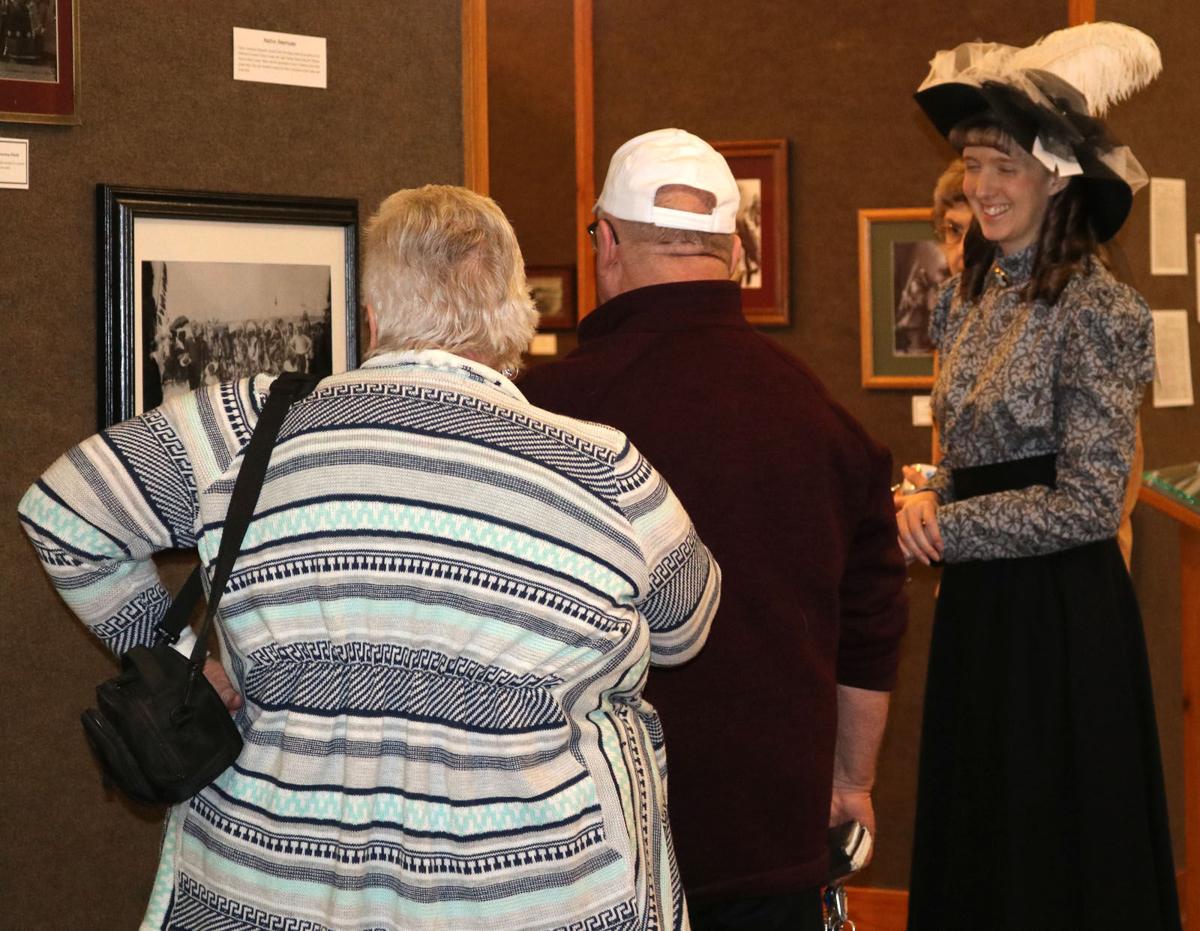 Holly Counts, right, and other Mari Sandoz staff members and volunteers dressed in period dress for Sunday's opening reception of an exhibit of Graves Photos. Counts is visiting with Frank Snocker, center, who was a CSC intern in the 1970s who researched the Graves Studio and its work after the glass plates were discovered. 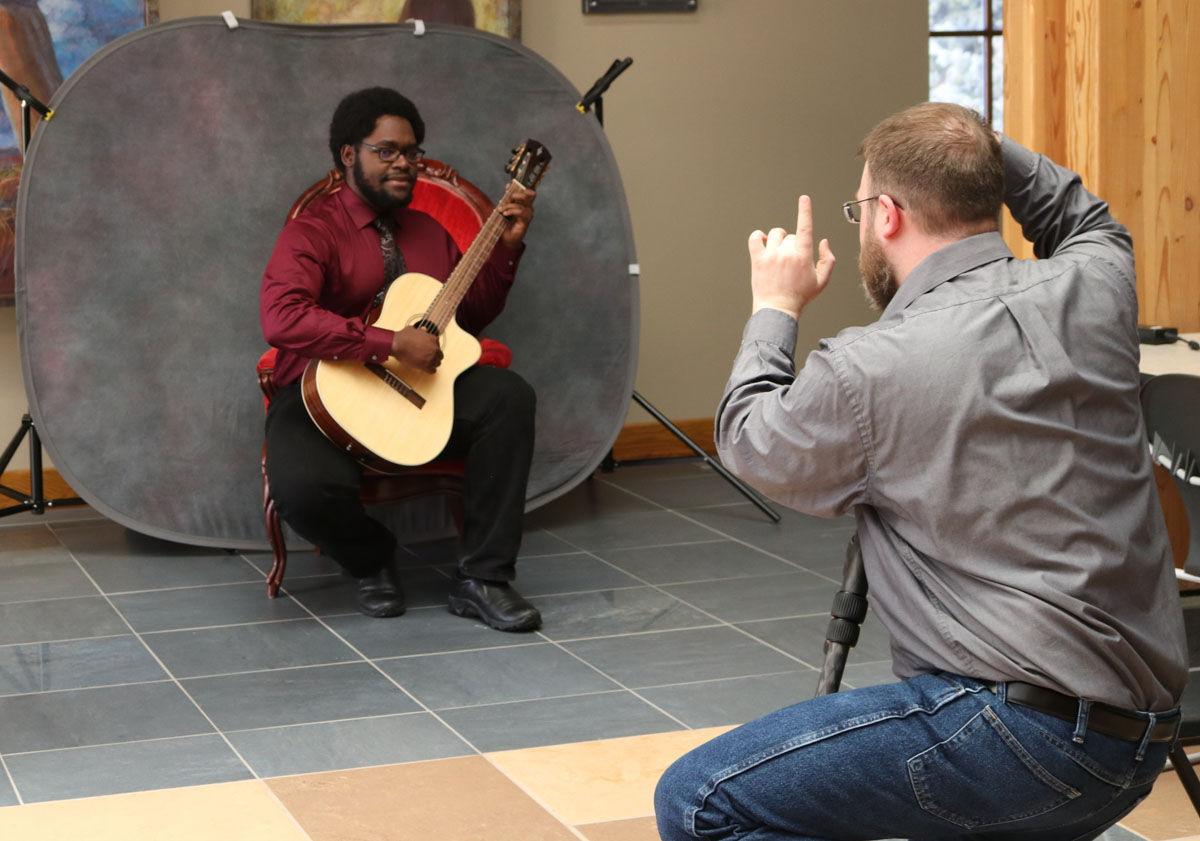 CSC photographer Daniel Binkard, right, took studio portraits of visitors at the opening reception in January 2019 for the new showing of the Graves Photography Collection.

A family enjoying a picnic, an afternoon tea with ladies in their finest clothing, spring maypole dancing and winter sleigh rides. Native American life, family portraits and portrayals of the agricultural industry of the time.

The Graves Photography Studio captured it all during the early days of Chadron, and many of the photos are now on display for the first time, showcasing the true depth of the collection. The display, "Photos from the Rubble," opened Sunday with a reception at the Mari Sandoz High Plains Heritage Museum and will remain on display through March.

Ray and Faye Graves owned the Graves Photography Studio in Chadron during pioneer times. Ray purchased the I.R. McIntire Studio in 1906, having trained for the profession in New York.

“He was an outstanding photographer,” Snocker said.

When Ray and Faye married, she joined him in the business, becoming a successful photographer in her own right. She trained at the Illinois College of Photography in Effingham, Ill., attending sessions there two different times. After Ray died in 1919 during the Spanish flu epidemic, Faye appears to have taken a couple of years away from the business before returning to run the studio on her own until her retirement in 1940.

Among the photographs she captured during that time are portraits of Chadron resident Betty Reading. Born in Chadron in 1930, Reading has three photos of herself as a child at ages 1, 3 and 7 taken by Faye. When she learned the Sandoz Center was preparing to showcase the collection in honor of Raye’s death 100 years ago, she loaned them her photographs.

Prior to the exhibit opening she said she was excited to see them among the larger collection of photos. After viewing it, she said the center’s staff did a beautiful job creating the show and incorporating her small piece into it.

“You feel like you’re part of history,” she said upon seeing the portraits among other iconic Graves’ images.

The glass plate negatives from the Graves Studio were nearly lost to history after Faye retired. No one knew of their existence until 1973 when John Chaney hired Zuver Construction to bulldoze the old studio to make room for the Chaney Building on Main Street. During demolition, the heavy equipment broke through a false wall, behind which the glass plates were stored. An estimated 9,000 plates were broken in that moment, but 1,100 were salvaged after the construction crew realized the treasure trove was there.

The remaining plates were taken to The Chadron Record office for safekeeping and were once again stored away, this time in the second story of the newspaper. A few years later, newspaper staff member Jan Reichenberg was working as the head of the paper’s advertising department. While working on a special historical section, someone mentioned the glass plates to her. She contacted former owner Don Huls, who told her they were around someplace, likely upstairs.

She located them and began making her own contact prints and used them in newspaper advertising.

“The first one I printed was a lady with a great big hat,” Reichenberg recalled. “It was a wonderful section.”

First National Bank of Chadron sponsored additional ads every week, and the community was asked to help identify the photos.

Eventually, the plates were donated to Chadron State College. The Sandoz Center displayed some of the collection in 2004, but focused only on portraits taken by the Graves. This year’s showing shows the variety contained in the Graves’ body of work, said Holly Count, who has spent months working on the display.

The entire collection is a “gold mine,” Snocker said, adding that it’s likely that at least some of the photos are nationally important. Many of the plates are broken and the emulsion has continued to degrade over time, but contact prints made in the 1970s preserved some of the photos as they existed at that time.

Snocker and other CSC interns did much of the initial research on the Graves’ collection after Reichenberg found them in the Record’s upper story. That included making the contact prints and painstakingly going through the Record’s bound volumes to find any mention of the couple.

“A lot of midnights, a lot of oil,” recalled Snocker, who became quite emotional during Sunday’s reception.

Count has now digitized the photographs in preparation for the current display.

Members of both the Graves’ and Zuver families were able to be present at the show’s opening. Don and Tammy Zuver were excited to see the display, which they called great. Don’s uncle Melvin Zuver was the one who discovered the plates after the false wall was destroyed.

Ray’s great-nephew, Wayne Roberts, who lives in Texas, also attended. He first became aware of Ray and Faye’s work in Chadron in college when Snocker sent a copy of his first paper on the collection to his mother. In 2005, while doing his own genealogical research, he discovered the plates had been donated to CSC.

“I appreciate that the plates ended up with an academic institution,” he said. “They’re in the right place.”

School board advised of financial issue

Monday night, the Chadron Public Schools Board of Education received some cautionary information regarding the district finances.

For Brian Swallow, a return to Chadron is a nice break from some of the more metropolitan areas he’s lived and visited.

Motz named Citizen of the Year

Anyone who’s spent some time at the Chadron Senior Center, or needed a meal or a ride, has likely had an encounter with Sheila Motz, the cente…

Betty and Norm Martin and Jim and Carol Wright, from left, examine photographs and a few broken glass plates from the Graves Photography Collection at the opening reception for the exhibit at the Mari Sandoz Center in January 2019.

Holly Counts, right, and other Mari Sandoz staff members and volunteers dressed in period dress for Sunday's opening reception of an exhibit of Graves Photos. Counts is visiting with Frank Snocker, center, who was a CSC intern in the 1970s who researched the Graves Studio and its work after the glass plates were discovered.

CSC photographer Daniel Binkard, right, took studio portraits of visitors at the opening reception in January 2019 for the new showing of the Graves Photography Collection.