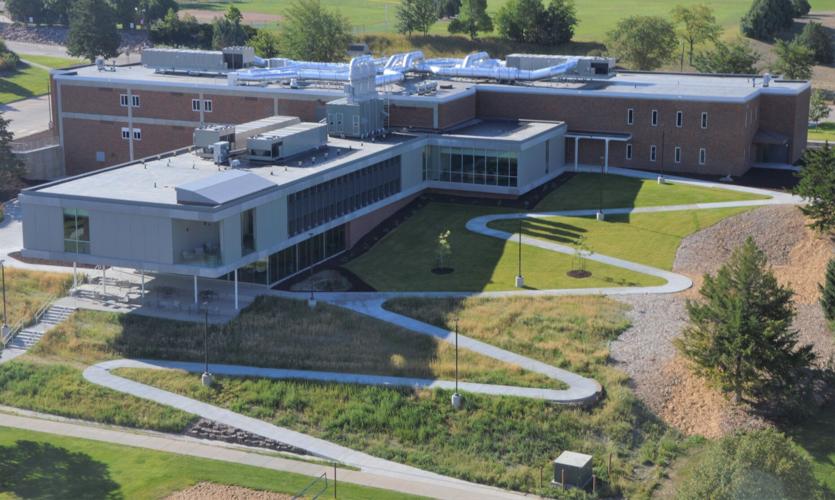 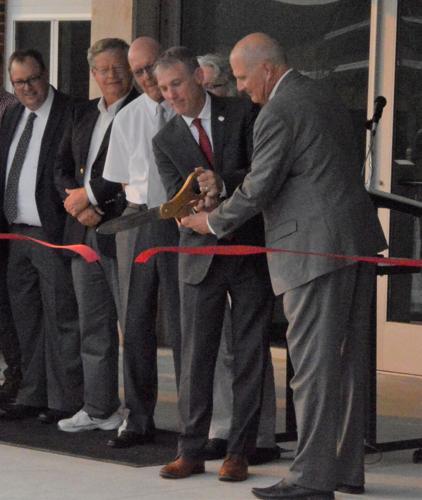 Last Wednesday, a crowd of Chadron State students, faculty and alumni, community residents, and members of the Nebraska State Colleges Board of Trustees gathered to celebrate the new Math and Science Center of Innovative Learning (COIL) at the Chadron State campus.

College President Dr. Randy Rhine expressed his appreciation to the Board of Trustees and Nebraska State College System Chancellor Paul Turman, noting in particular Turman’s terms of the bond that allowed construction of the COIL in one phase rather than the planned three.

Rhine also commended the Math and Science faculty, who vacated the building and worked in temporary classrooms, labs and offices for two years.

“I don’t think I got a single complaint about that,” Rhine said with a grin. “They probably were out there. I just didn’t hear them.”

The new building is a great example of a private and public partnership, Rhine said, as it brought together the State of Nebraska, the Nebraska State College System, the college and its foundation, as well and friends and alumni.

“This project is a fine example of a great Nebraska public-private partnership. Projects like this require a great deal of planning and dedication to conceive and construct. We had a great team in our architectural firm Bahr Vermeer and Hacker, and our construction manager Adolfson & Peterson. Of course, this couldn't have happened without the private support of alumni and friends. Today is a day where we celebrate the college and its donors,” Rhine said.

The original building was dedicated on March 19, 1971. When first built, it cost $1,085,748. For more than 50 years, the building and programs there have served the students with significant success, Rhine said, providing opportunities such as Rural Health Opportunities Program.

The new facility, completed at a cost of $32 million, will continue to serve students, faculty and the regions for decades to come, he added.

Chancellor Paul Turman was excited to be part of the ceremony, pointing out the former space was built for teaching learning back in the 1970s. Such things have evolved dramatically, he said, and the COIL provides the space needed now

Renovation of the building has long been a top priority for the NSCS Board of Trustees. In 2019, Nebraska Senators and Gov. Pete Ricketts approved funding, which involved a complete renovation of the existing structure and addition of a new nearly 17,000-square foot north wing. Groundbreaking for the project took place in Sept. 2020.

“This is a monumental project, a great facility so students can learn at the highest levels. I’m very excited to see what COIL will provide CSC, our ability to recruit students, and then bring those students right back into the workforce here in Nebraska in years to come,” Turman said. “We have so many great programs in place like RHOP to create unique STEM opportunities for students to stay in the rural areas of the state. As you get the opportunity to walk through this space, I think what it has to offer our students is going to spark your amazement.”

Chadron State Foundation Board Chair John Smith said he is humbled to be at the ceremony, as well as very grateful to everyone who made the project possible. He noted there were 184 donors, businesses families and organizations who supported it, generating $3.6 million to make it possible.

Smith also spoke to the New Horizon campaign and its testament to the generosity of the Chadron State supporters. In the past 10 years, there has been more than $80 million in projects for the betterment of the college campus. These include the Coffee Agriculture Pavilion and Rangeland complex, the Chicoine Center, the Sports Complex, the Track and Field Complex, and Eagle Ridge housing.

Seeing the completion of the COIL in amazing and inspiring, Smith said, not just to Chadron but to western Nebraska and this region. “This building will surely be home to unlimited experiences that will be part of the story of so many students to come,” he said, and encouraged everyone to be proud of the legacy of which they have been a part.

“This building may be built by steel, concrete, bricks and mortar, but it is also built on dreams, sacrifices, dedication, perseverance and the true spirit of positive growth. We call that the Chadron State way.”

Senior student and Chemistry major Kelli Schoch said she’s excited about the new opportunities in the new COIL. With plans to go into women’s medicine as an obstetrician and gynecologist, Schoch said the COIL has the technology and classrooms to help her on that career path. As a senior, she and other students were able to use the former Math and Science building as well as the new COIL. She said the new technology, and lab and study spaces have had a positive impacts on many students.

Mathematical and Natural Sciences Professor Haas said the feedback faculty has received has been positive. The building has always been special to him, as he attended Scholastic Day there and has fond memories of the staff and students while he attended classes at CSC.

At the forefront of those memories is the people who made everything special.

“That’s what Chadron State College is all about,” Haas said. “The people make this place what it is. Our people are so great at what they do. They care about the job they’re doing, but they care more about the people who they are doing it for . . . This building is a conduit for creating relationships that last.”

While he knows the faculty could teach in any environment, and do it well, has is particularly excited to see what they can do with the resources the COIL has.

Dr. Vern Holmes marked a century in life with a celebration Saturday afternoon. The following is taken from a Dec. 7, 2017 story written by Ke…

At about 5 p.m. Friday, Dawes County Attorney/Coroner Vance Haug and the Nebraska State Patrol were called to the Dawes County Jail to investi…

Nebraska Leadership Education/Action Development (LEAD) Class 40 met in the county for three days this week, beginning their visit at Chadron …