Stacie Mittleider takes a photo of an art wall by K-8 students from Chadron and Hay Springs at Chadron State College's Social Work 435 conference on Hate Nov. 6, in the Student Center. Christina Winter looks on. 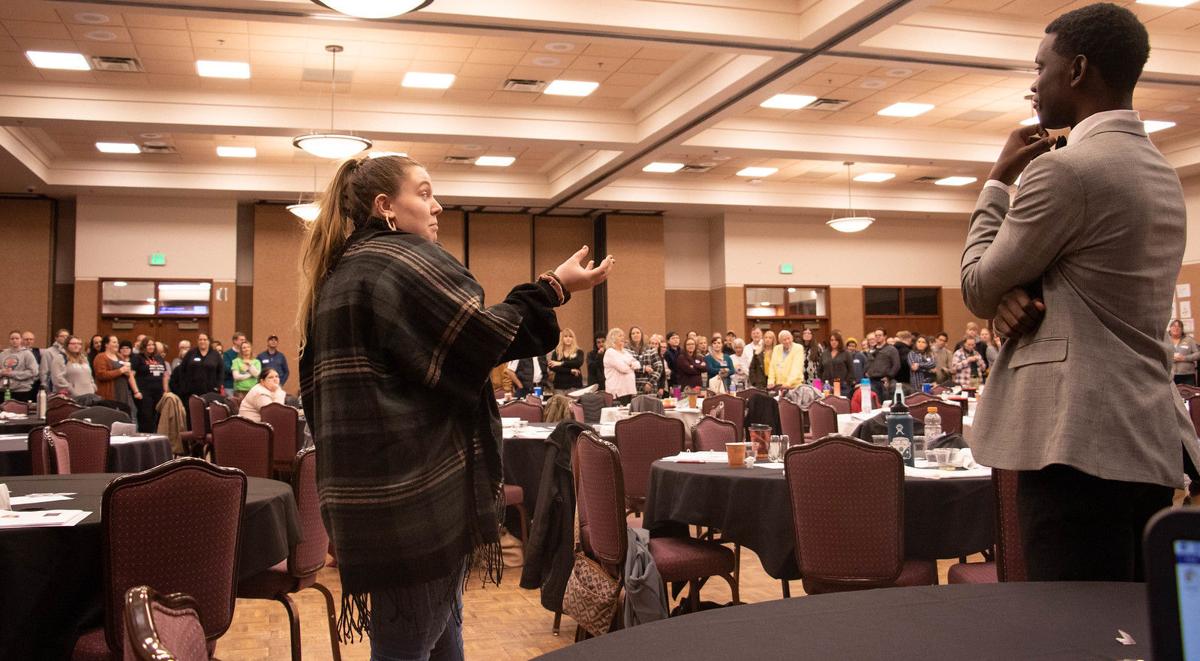 Mary Weingart of Western Nebraska Community College in Scottsbluff, left, and Chris Singleton, right, take part in a group activity about describing opinions at odds with others in the room at Chadron State College's Social Work 435 conference on Hate Nov. 6, in the Student Center. 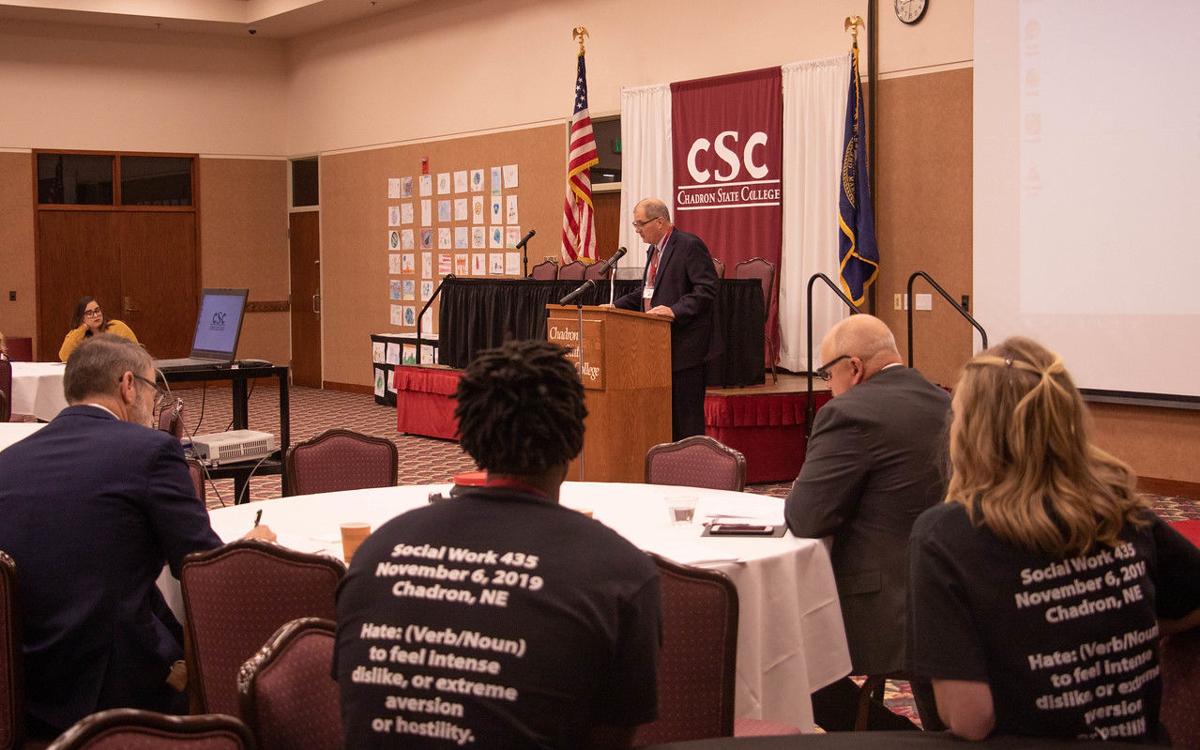 Speakers at Chadron State College’s Social Work 435 conference focused on the power of forgiveness, kindness, and love as an antidote to hate. Senior students in the Social Work program presented the conference as part of their graduation requirements.

Social worker and former gang member Sammy Rangel opened the conference. He told of his childhood of verbal, physical, and sexual abuse that led him to run away from home at the age of 11. His third day on the streets of Chicago he witnessed a murder. When he was returned to his home, the abuse escalated.

“I didn’t want to kill my mom, but I feared she was going to kill me,” he said.

His unruly behavior in school led to discipline problems and even though he and his siblings reported their parents’ violence to teachers and police officers, the children were not removed from the home.

“Kids don’t just act that way. Somebody needed to ask ‘why’ but they didn’t,” Rangel said.

He went on to commit crimes than resulted in prison time and multiple stints of solitary confinement, once for setting a fire in the cell of a white supremacist.

“I got to the point where I thought, ‘if no one will listen, then someone will pay.’ I had made the association at that time that the people who wouldn’t listen were white and my friends on the street who gave me a bed and food were brown,” Rangel said.

Citing examples from his youth, he asked future social workers in the audience to consider the important implications of their case management.

“Think about how you treat your clients when they are at their worst. Your case notes can condemn a child or give them opportunities to improve. No one is broken beyond repair. Don’t give up on people,” Rangel said.

He said understanding professionals who saw his humanity helped him forgive others, dismantle his grievances, and leave his devotion to suffering.

“You may be the first person to listen [to your client]. You can validate the person without validating their viewpoint. I failed to change 10,000 times, but I got it right once,” he said.

Dr. Ferial Pearson, founder of Secret Kindness Agents, shared the backstory of the organization that now has more than 11,000 followers on Facebook.

The Sandy Hook school shooting in December 2012 had profound effect on Pearson, a teacher in Ralston, Nebraska, at the time.

“I wanted to stay on the couch with my kids and a blanket, order everything from Amazon Prime and never have my family leave the house again. But, I had to go back to school because many times I was the only advocate for my students,” Pearson said.

A question from her 13-year-old daughter planted the seed of an idea that has become a book, a TEDx talk, a Hallmark commercial and more: “What if everyone had been kind to the killer every day?”

Pearson said she realized the Sandy Hook situation was much more complicated than that, but she also recognized the potential of the suggestion. She conferred with her students and together they set ground rules for the project.

Journaling reflections about their feelings before, during, and after was an important aspect of Secret Kindness Agents.

Pearson shared examples of youth and adults who have been positively affected by the program. Some, now in their 20s, have embraced their kind acts and transformed them into habits, such as picking up trash and mowing lawns.

About the same time, Pearson began to use a Native American legend about symbolic two wolves, one good and one bad, inside each person, to encourage her students to see and feed the positive, and starve the negative.

“They started to notice when other students were struggling and said, ‘let’s feed his good wolf.’ Kids were being nicer to their siblings at home. Baking cookies for neighbors, doing chores for grandparents. Teachers were being more kind to students. Teachers were kinder to each other,” Pearson said. “A mute student in Colorado started speaking and said it was because of Secret Kindness Agents made school feel safer.”

Aydin Garvin of Crawford explained how being bisexual and non-binary, and preferring the pronoun “they” has been a challenge. Garvin said suitemates were not accepting which resulted in mental health issues and decreased confidence culminating in a time when they skipped class for a week.

Thanks to a counselor and support group, Garvin felt increased well-being and said they came out to their parents last summer and to the public in September.

“Bravery is contagious. You have a chance to change a life,” Garvin said.

Kevin Coy of Davenport, Fla., shared two experiences with blunt hate. As a high school sophomore, his geometry teacher publicly ridiculed his goal of playing college football and the second when his family was visiting Chadron and passengers in a vehicle driving by yelled the “N” word from an open window.

“I was sorry my family came so far to hear an insult. I can’t control what others say or do, but what I can control, is how I react. Hate does not define you. I chose to take the high route instead of letting it escalate. How we treat and what we say to others can affect them for the rest of their lives. Lead with love. Be the positive change you want to see in the world,” said Coy, who played football at CSC for four seasons and was an Academic All-American.

BriYanna Lyon of Fountain, Colo., shared stories of hateful comments her family has received because she and her fraternal twin brother have different skin color. Their mother is African American and their father is from Thailand.

When she was born, the doctor told Lyon’s father that his newborn daughter could have a different father than her brother. Other times when the family has been conducting business, comments or questions have centered on her skin color being different. Once, a police officer followed her and a group of cousins so closely through a store in her hometown that her grandfather, who is normally easy-going, became upset.

Spike Eickholt, an attorney with the American Civil Liberties Union in Lincoln, explained that even though many feel Nebraska is not as progressive as it could be, the state’s Hate Crime statute 28-110 was passed in 1997 when he worked closely with legislature.

The law includes a provision so victims can take civil action against perpetrators for damages. There is a current proposal to add gender identity to the statute.

“Hate is not a crime, in and of itself, unless you take action on it. Speech is protected even if it is hateful or offensive. Only if there is a threat of eminent danger, is it illegal. Often it is accompanied by trespassing, vandalism, or conspiracy and those charges will stand,” Eickholt said.

Chris Singleton, a former Chicago Cubs baseball player, opened his presentation by asking all the audience members to hug someone who looked different from him or her and tell the person they love them.

Singleton was 19 in 2015 when his mother was shot and killed in the Mother Emanuel African Methodist Episcopal church in Charleston, South Carolina.

“I always do that because someone in here needed it. People think I’m crazy, but I think if I would have grown up with my mother’s killer, I would have hugged him and told him I loved him in middle school and high school,” Singleton said. “Dylann Roof, a real human being, walked into my church and fired 70 shots. He was misled and mistaught. We can make change with love.”

Singleton said the shooting, which was planned by Roof to start a race war, had the opposite effect and instead united Charleston.

Singleton, who is married, has a child and is raising his younger brother and sister, decided his mission is to travel and speak about love and forgiveness.

“I know it can make a difference. One life is not important except in the impact it has on other lives. I want to teach like Dr. King. Lead with love and strive for unity,” Singleton said.

Monique Mousseau and her wife, Felipa De Leon, both members of the Oglala Lakota Sioux tribe, spoke about their successful lobbying efforts for same-sex marriage and hate crime legislation on the Pine Ridge Reservation.

Mousseau, a certified federal police officer, said she was threatened by fellow officers and she left the force in 2006.

“I received threats to my parents and my wife. I was gay bashed and it’s time to change the homophobic mentality. We’ve heard of so many tragedies: bashing, suicide, rape, murder. So we worked hard for this legislation,” Mousseau said.

De Leon said she has been bullied and shamed for being Native American, being lesbian, being female, and having dyslexia.

“By working together we can make this a better place for everybody to live,” De Leon said.

The New Year symbolizes a new start, but at The New Leaf co-owners Phill and Angela Lollar Jan. 8 marked their second anniversary since taking…

There’s a new face at the Chadron Medical Clinic and the Crawford clinic with the addition of Physician Assistant Edward Sydow, PA-C, who star…

During their regular meeting Monday night, Chadron City Council approved Resolution No. 2020-08, to approve and adopt the City of Chadron Deer…

Stacie Mittleider takes a photo of an art wall by K-8 students from Chadron and Hay Springs at Chadron State College's Social Work 435 conference on Hate Nov. 6, in the Student Center. Christina Winter looks on.

Mary Weingart of Western Nebraska Community College in Scottsbluff, left, and Chris Singleton, right, take part in a group activity about describing opinions at odds with others in the room at Chadron State College's Social Work 435 conference on Hate Nov. 6, in the Student Center.