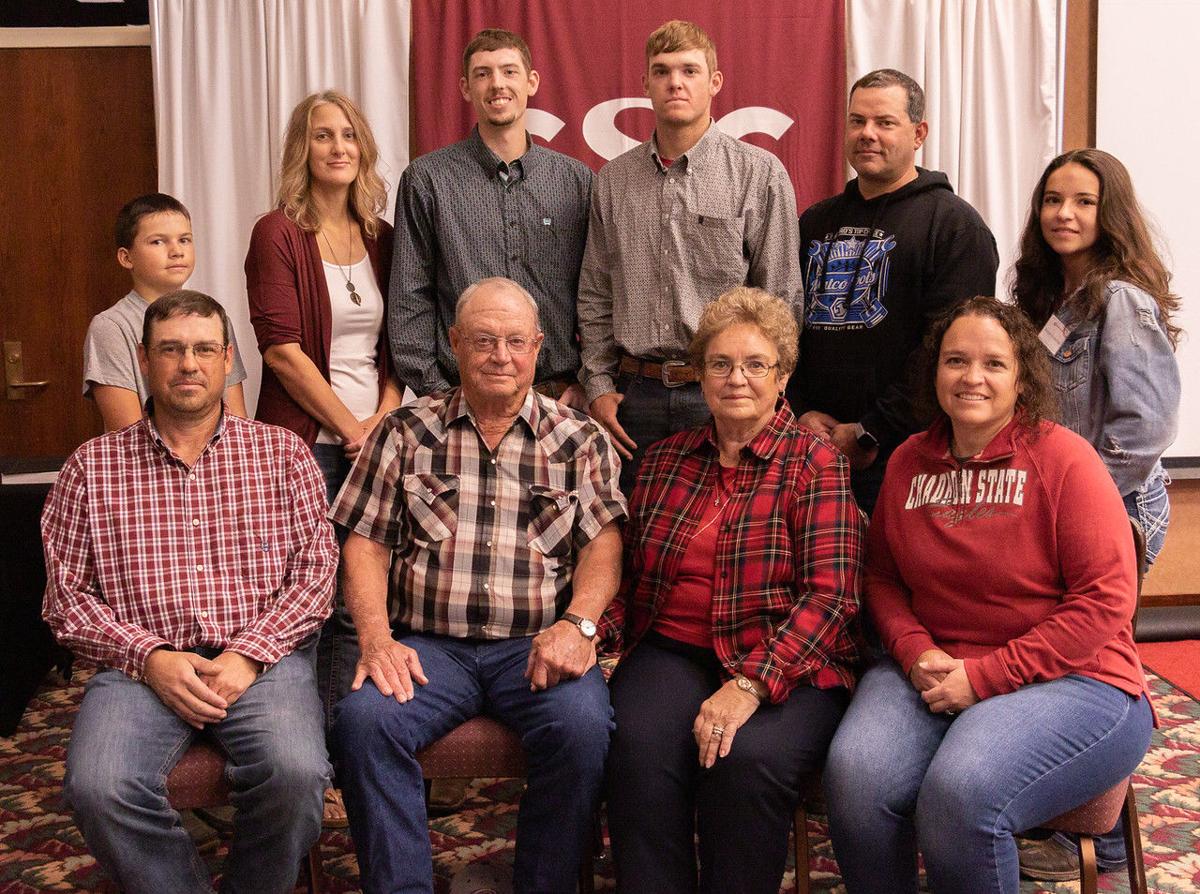 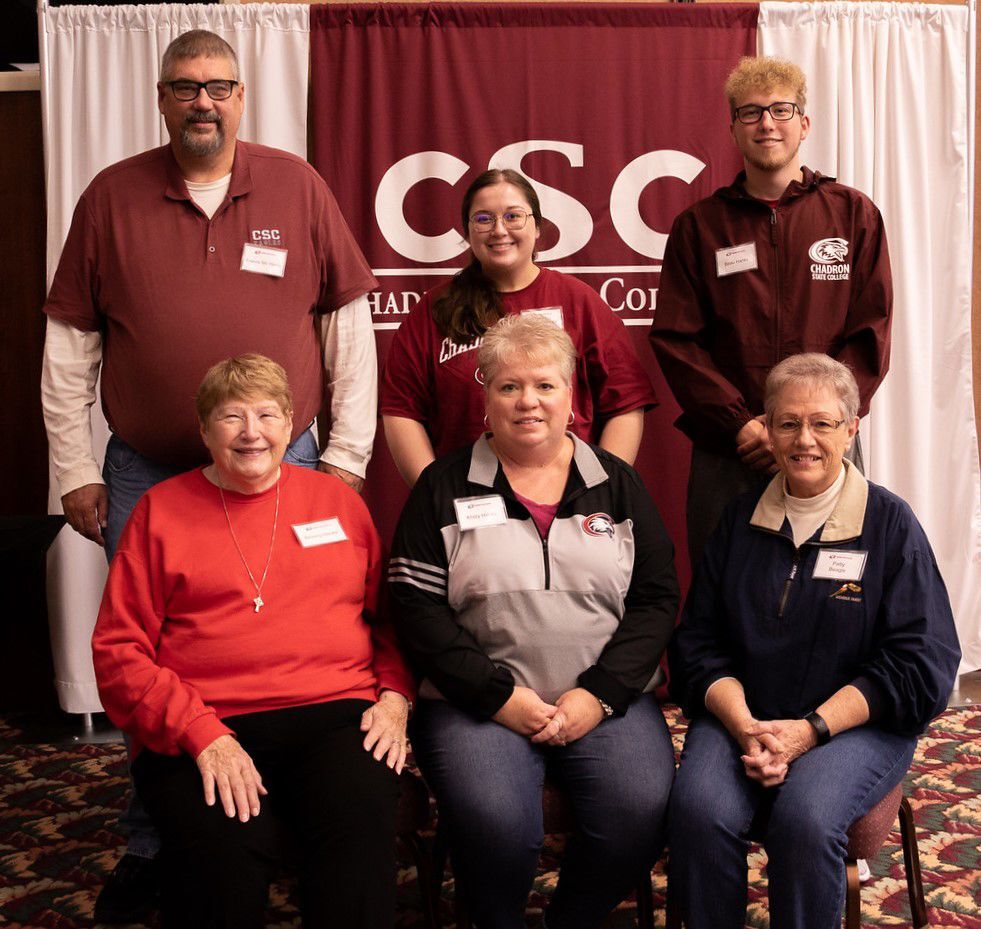 The Hanks family was recognized with the Family Tree Award during Chadron State College's Homecoming Saturday. The Burkhiser-Madsen family also received the award.

The Hanks family tree includes three generations of teachers from the Panhandle.

The late Don Hanks, a native of Sheridan County, earned his bachelor’s in Business Education in 1961, his master’s in 1966, and his specialist degree in 1969 from the University of Northern Colorado.

Beverly earned a bachelor’s degree in Social Studies Education, and a minor in English. While a student, she participated in band and choir and was a member of the Xi Delta Zeta Sorority.

She taught at Hemingford Public Schools from 1971 to 1998 when she retired. Following her retirement, she was a substitute teacher for 15 years.

Mo earned a Business Management bachelor’s in 1990, a Business Education degree in 1995, and a master’s in Secondary Administration in 2003. In 2017, he earned a Specialist degree from Wayne State College.

When Mo transferred to CSC from the University of Northern Iowa in 1984, he became a starter at offensive tackle. In addition to playing football, he threw shot put for indoor track and shot put, discus, and hammer for outdoor track in 1985-86. He medaled in the shot put at every meet and earned six letters.

He is the superintendent of Crawford Public Schools. Previously, he was the secondary principal of Kimball Public Schools, a teacher and coach at Hemingford, Hay Springs, and Oelrichs.

He and his wife, Kristy (Beagle), have two children, Jessica and Beau.

She is a Title 1C Service Provider for Education Service Unit 13.

The Burkhiser name is well-known on campus, thanks in part to the name of the Burkhiser Technology Complex which houses classrooms, labs, and faculty offices for Business and Applied Sciences. Temporarily, Burkhiser is also housing Math Science classrooms, labs and faculty offices until construction is complete on the new facility. Burkhiser was built in 1971 and later named in honor of Donald Burkhiser, a long-time Industrial Arts division chair from 1945 to 1973.

Don and his wife, Juanah, had three daughters, Phyllis, Barbara, Judith, and one son, Rich. He was awarded the college’s Distinguished Service Award in 1984.

Barbara earned an Associate of Arts degree from CSC in 1952 in Elementary Education. She died in 1997. She and her husband, J. Larry Lochridge had two children, David and Janet. J. Larry graduated in 1953 with a degree in HPER and Industrial Technology Education. He was a member of the football and track teams, the Industrial Art Guild, and Blue Key Honor Society. He is a retired Clark County School District Counselor. He is remarried and lives in Las Vegas.

Judith was a 1957 graduate of Chadron Prep and earned a bachelor’s in Education in 1960. She was a member of the choir, Eagleaires, Cardinal Key, and Scholastic Club. She earned a master’s in Education in 1968. Later she earned a Special Education Certificate from University of California Riverside. She lives in Rancho Cucamonga, California, where she taught TaijiFit from 2014 to 2021 and proofreads books for David-Dorian Ross. Her husband is deceased. She has two children, Jeff Lunceford and Dara Parker.

Phyllis and her husband, Ray’s, daughter, Dr. Kim Madsen, earned a bachelor’s in Home Economics and Art in 1972 and was a member of the Ethel Delzell Home Ec Club. In 1978, she earned a master’s in Vocational Education, served as a graduate assistant from 1981 to 1983 and joined the CSC faculty in 1983. She earned a doctorate in Curriculum and Instruction/Educational Administration from the University of Nebraska Lincoln in 1996 and was the director of CSC’s Child Development Center 1989-2013.

Justin earned a bachelor’s in Ag Business in 1996. He farms and ranches in the Deadhorse community and is an insurance agent for FNIC in Chadron. He and his wife, Carey, have three children, Clay, Cody, and Cole.

Clay earned a bachelor’s in Rangeland Management in 2020. He is employed with FNIC in Chadron as an insurance agent, and farms and ranches with his family.

Cody was a part of the Rural Business Leadership Initiative and in 2021 earned a bachelor’s in Business Administration with an emphasis in Finance and Ag Business. He was a universal banking officer at Bank of the West 2019-2020 and is currently a personal banker at Platte Valley Bank in Scottsbluff.

Cole is enrolled at CSC in the Range Management program, farms and ranches with his family, and is employed part-time for Sellman Hay and Spraying.

Jennifer earned a bachelor’s degree in Business Administration with an emphasis in Accounting and Ag Business in 1996. She lives in North Platte, Nebraska, with her children, Haley and Kasie.

Julie earned a bachelor’s in Business Administration in 2001. She has been in the banking industry for 20 years and is employed at Security First Bank in Chadron. She and her husband, Marty, have two children, Morgan and Roudy.

Another member of what Tom Brokaw called “the greatest generation” will observe her 100th birthday today. The area’s newest centenarian is Mar…

During their regular meeting Monday night, the Chadron City Council, with member Keith Crofutt absent, was introduced to the newest members of…

A 20-year-old Detroit, Mich. man who faces charges related to a stolen firearm and possession of multiple grams of cocaine will make an appear…