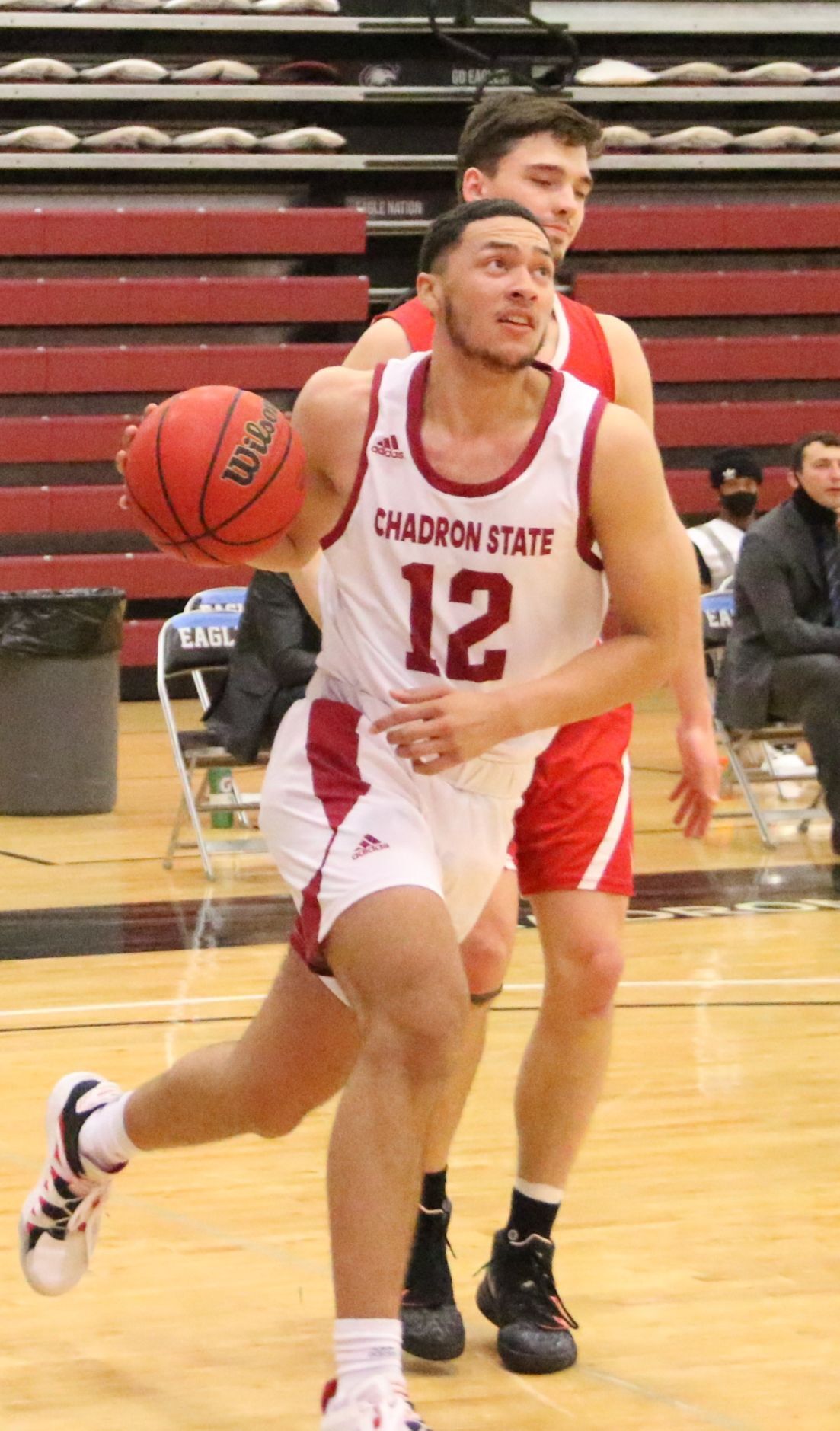 Junior guard Teddy Parham takes the ball to the basket against Western Colorado in January.  He averaged 14.8 points, made a team-high 37 treys and led the Eagles in steals with 22. 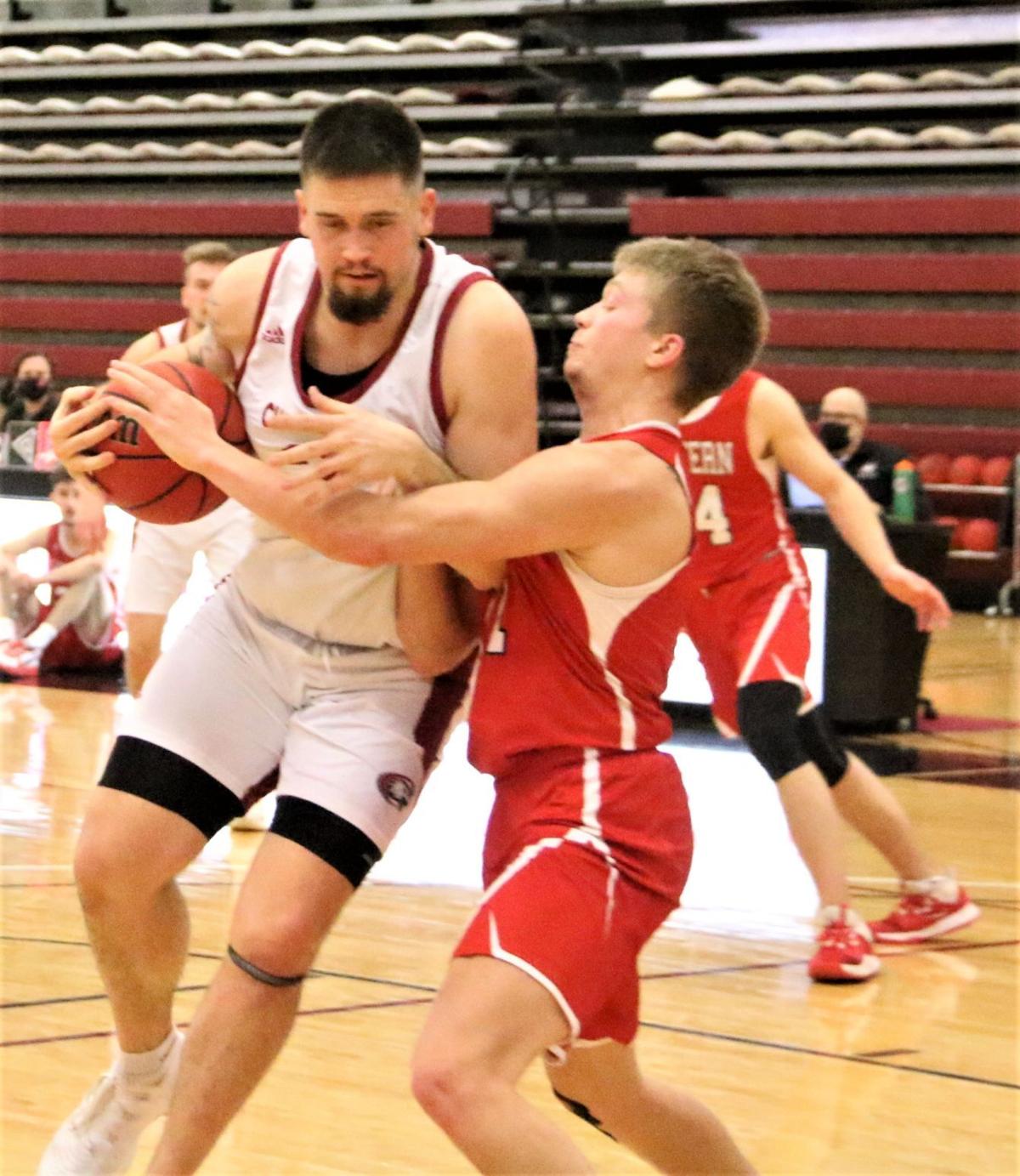 Despite being fouled, Chadron State center Jacob Jefferson goes to the basket during the Eales’ win over Western Colorado this winter.  He was leading the Eagles in scoring and rebounding when he was injured at midseason.  He plans to be ready for the 2021-22.

The Chadron State College men’s basketball team achieved a major milepost during the 2020-21 season when it qualified for the Rocky Mountain Athletic Conference playoffs for the first time in nearly a decade. Chadron State fans are hoping that’s the first of many major accomplishments the Eagles will have under the aggressive leadership of the team’s new coach, Shane Paben.

“I didn’t come here to be average or mediocre,” Paben said several times during the season. Fans had to be impressed by the caliber of the talent he landed while launching a major rebuilding project to make the Eagles competitive.

Admittedly the season had both ups and downs, but brighter days are likely if the key players on this year’s team remain in the program and Paben can add “a few more horses,” using his terminology.

The Eagles played just 13 games, about half the normal schedule. Eight contests were cancelled because of COVID issues. The team finished with a 5-8 record. That was one more win than CSC posted the previous year when a full schedule was played. Two of the setbacks occurred in overtime, one of them to Colorado Mesa, which emerged as the RMAC playoff winner.

Particularly disappointing were the cancellation of four contests immediately after the Eagles had played their best game in several years while defeating Black Hills State 71-58 on Jan. 26.

The team also suffered a huge setback when Jacob Jefferson, perhaps the best, most versatile, center in the conference, sustained a leg injury and was forced to miss the last half of the season. Jefferson was leading the Eagles in both scoring at 15.4 points and rebounding at 5.7 when he was sidelined. He was shooting 61.5 percent from the field that included going 9-of-18 on 3-pointers.

Paben also inherited hard-working forwards Brady Delimont and Kayden Sund, but after Jefferson’s loss, the Eagles had to depend increasingly for their clout on the guards Paben had rounded up after being named the coach in June from among 140 applicants.

The team leaders were Teddy Parham, who averaged 14.8 points and scored 32 and 28 points in games down the stretch, and Marcus Jefferson, who was the primary ball-handler and the assist leader while averaging 10.2 points and 5.1 rebounds.

Psalm Maduakor, a blue-collar type, was another newcomer who continually supplied important minutes.

Demonstrating that he’s never going to be satisfied with the status quo, Paben added another talented guard, Deundra Roberson, and a post player, Bryant Jefferson, at the start of the second semester to provide depth and more physicality.

In looking back on the season, Paben, said he believes the Eagles made some big strides and are on the upswing. He was pleased with hustle, energy and effort his players gave. But he noted more improvement is needed.

Paben was disappointed that the Eagles lost all six games when they were the visitors. Following the setback at Colorado Christian in the final regular season game, he said the team lacked the talent, depth and mental toughness to win on the road.

He added that the Eagles will return a solid guard corps, but needs more size up front. Another capable guard is already on the roster. He’s C.J. Jennings, who was the leading scorer at Saint Martin’s University at Lacey, Wash., with a 15.7-point average that included 35% shooting from 3-point (79-225) range in 2019-2000.

“We’re not going to set low expectations and we’re not going to be satisfied,” Paben stated after the Eagles dropped the playoff game at Mesa. “Getting back to the RMAC Tournament is the expectation going forward and even the NCAA Tournament. I think the Chadron community sees what we did this year and they’re proud, but it’s just the start.”

Though the Cardinals had a shaky start of things in their Sept. 9 matchup at home against Gering, the girls were able to turn things around an…

The Chadron Softball team picked up wins against Hershey and Alliance last weekend at the Twin City Tournament in Scottsbluff.

The game was called a little early because of lightning, but the Chadron High Cardinals produced enough thunder in the first 46 minutes of pla…

Junior guard Teddy Parham takes the ball to the basket against Western Colorado in January.  He averaged 14.8 points, made a team-high 37 treys and led the Eagles in steals with 22.

Despite being fouled, Chadron State center Jacob Jefferson goes to the basket during the Eales’ win over Western Colorado this winter.  He was leading the Eagles in scoring and rebounding when he was injured at midseason.  He plans to be ready for the 2021-22.