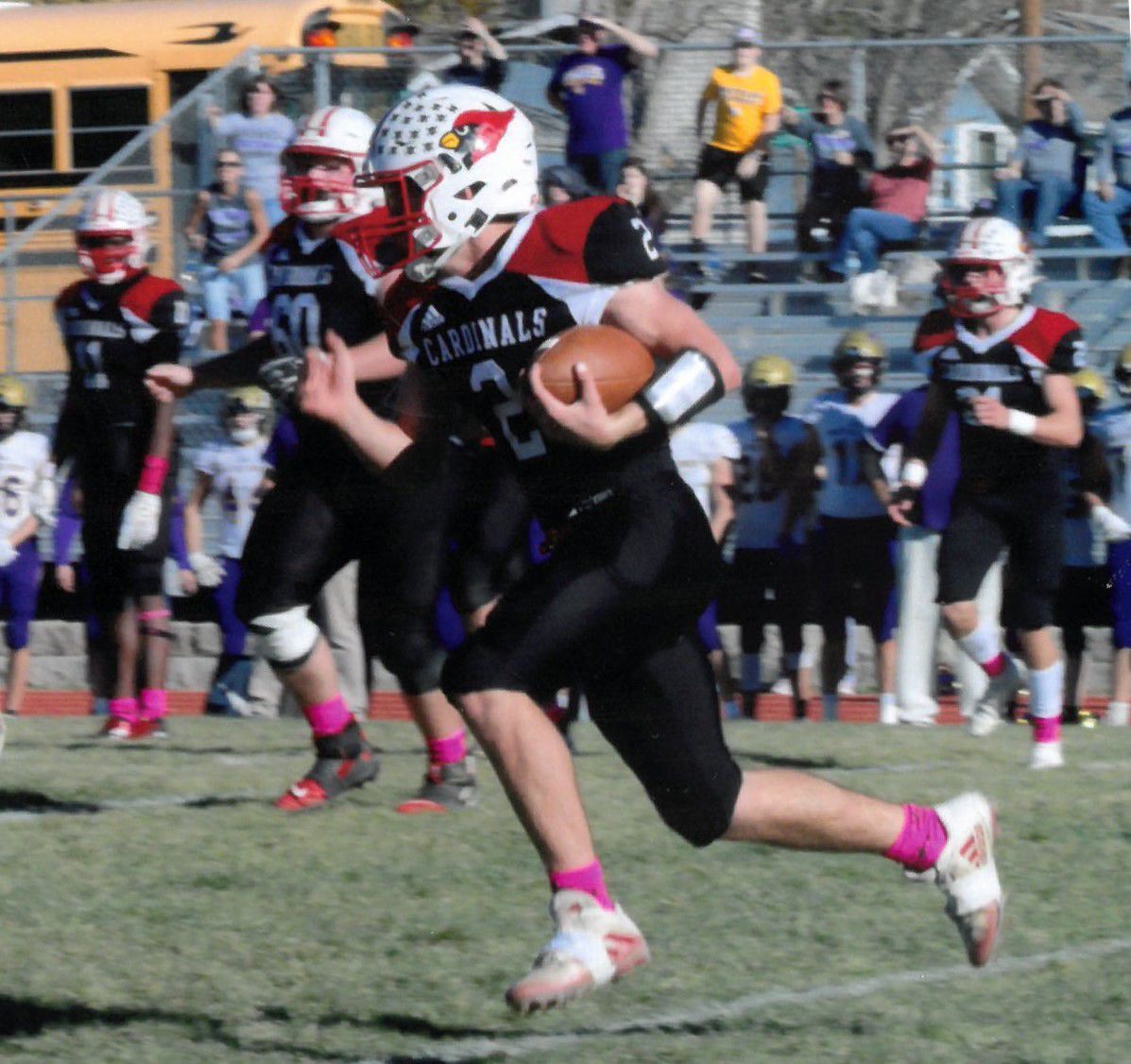 Senior Dawson Dunbar carried the ball 157 times for 1,167 yards and 18 touchdowns this fall, helping the Chadron Cardinals to a 9-0 regular-season record and the Class C1-8 district title. 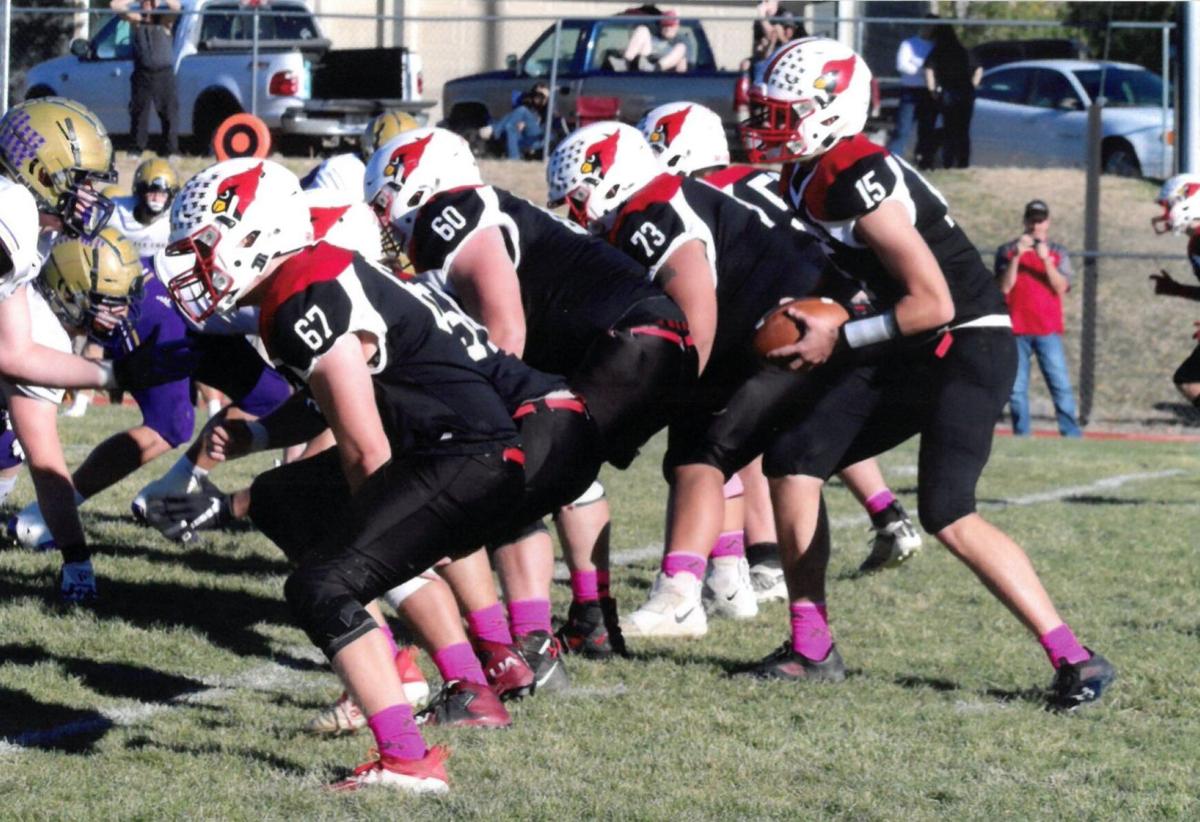 Quarterback Justus Alcorn takes the snap while operating behind one of the Cardinals’ biggest and best offensive lines.  The linemen was made up, from left, of Cody Hall, Shawn Schremmer, Ryan Bickel, Jesse Stolley and Jaret Anderson.  They also were mainstays in the defensive front that helped limit the opponents to 180 yards a game, half what the Cards’ averaged.

The Cardinals overwhelmed their nine regular season opponents, out-yarding them by a two-to-one margin and outscoring them by more than seven times while posting a perfect 9-0 record.

The Cards finished the regular slate with 3,062 total net yards and the opponents just 1,504. They also tallied 325 points while the nine rivals scored only 44. None of them scored more than eight points against the Cards. Things were lopsided in favor of the Red Birds.

Admittedly, most of their opponents this fall were not too potent, but teams don’t create their schedules, the Nebraska School Activities Association does that.

It was the 15th time that a Chadron High football team has finished the regular season undefeated. Just two other Class C-1 teams (Ashland-Greenwood and Kearney Catholic) in the state accomplished that feat in 2021.

The Cardinals were hoping their season would last longer. But Battle Creek, which bested them 28-20 in the first round of the playoffs, was a capable team, even though the Braves lost to Pierce in Friday’s semifinals.

“We had a really good team this year in more ways than one,” Coach Mike Lecher noted. “We played well and we had absolutely no on-or-off-the-field problems. This is an outstanding group of young men. The season ended earlier than we wanted it to, but that doesn’t mean we didn’t have a superb season. It’s one I will always remember and so will the players.”

The Cardinals had many strengths. It started up front with a group of big, experienced linemen, included an athletic quarterback who made few errors and could both run and throw, had a back who rushed for 1,167 yards and an array of other “playmakers,” or skill position players, who were broke loose for numerous big plays.

The Cardinals also were fortunate. They had almost no injuries. An exception was senior defensive back-receiver Michael Sorenson, who missed the last half of the season. Prior to his injury, Sorenson had six pass receptions that included touchdowns covering 24, 33 and 55 yards.

Lecher said the team had so many outstanding players that it was difficult to know who to nominate for post-season honors. While the All-Western Conference choices had not been announced when this was written, the Class C1-8 All-District choices posted last week includes six Cardinals on the first-team and four more who were accorded honorable mention.

Three of the all-district honorees joined the Cardinals when their families moved to Chadron during the summer of 2020 when their sons were going to be juniors. Their impact on the team’s success was immense. Anderson and Bickel helped fill out the line, combining with classmates Hall, Stolley, Shawn Schremmer and Garrett Ferguson to give the Cards much more clout and depth on both sides of the ball than the team would have had otherwise.

Alcorn also was a welcomed addition. Even though he was inexperienced at a position where it’s difficult to learn on the fly, he “played within himself,” last year, didn’t try to do too much and continually improved.

As a senior, he expanded his repertoire, particularly as running quarterback, something defensive coordinators dread.

But a year ago, he finished with minus 59 yards rushing because he was sacked numerous times. This year he had better protection, learned to avoid the rush more and gave the Cards another threat, carrying the ball 52 times for 538 yards for a 5.8-yard average and five TDs.

If Alcorns’ parents hadn’t made the move so he could attend the school where both had excelled as athletes, Dunbar would have been the quarterback the last two years. No doubt he would have done well at the position, but the Cardinals’ ground game might not have been as effective.

Dunbar led the Cards in rushing this fall with 157 carries for 1,167 yards, the sixth highest all-time, for a 7.4-yard average, and in scoring with 18 touchdowns and a two-point conversion for 110 points. He got the season off to a brisk start, rushing for 175 yards in the opener against Chase County, including an 85-yard romp, the seventh longest in CHS annals.

Lecher called Dunbar “a shifty runner.” He was effective both going between the tackles and going outside with the ability to make sharp cuts that often caused would-be tacklers to miss. He rushed for at least 100 yards in six games.

Provance and Gaswick were Alcorn’s favorite pass targets. Provance had 20 receptions for 391 yards for a 19.1-yard average and four touchdowns while Gaswick caught 14 tosses for 380 yards and seven TDs. Six of Gaswick’s touchdown receptions were at least 33 yards long, including those of 52 and 55 yards.

Bailey also gave the Cardinals a big boost, serving notice that he’s going to be a special player. He carried the ball 51 times for 449 yards, caught four passes for 71 yards and returned a pair of punts for 49 yards. He reached the end zone five times.

It’s believed that he saw more varsity action than any freshmen since Brad Ferguson and Phil Kaus were starters during Dick Stein’s third season at Chadron High in 1981.

With the Cardinals having such an explosive offense this year, it’s easy to overlook their defensive prowess. But the fact that the nine regular-season foes scored just 44 points speaks volumes.

Composite stats from either the Panhandle or the state won’t have the names of any Cardinals at the top of the 2021 tackle charts. That’s because the Cards usually ran twice as many plays for twice as many yards as the opponents. In other words, the Red Birds were on offense much more than on defense, where the tackles are made.

The list at the end of this article shows the tackle totals for the season. Those are the players who kept the opponents out of the end zone and off the scoreboard. They can be proud of their accomplishments.

Two players seem to deserve some extra credit. Besides sharing the lead for the most tackles with linebacker Rhett Cullers with 66 apiece, Cody Hall at defensive end led the Cards in quarterback sacks with five. He also scored the team’s only defensive touchdown while recovering a fumble in the end zone against Sidney, and averaged 35 yards on 18 punts. The low number of punts illuminates the team’s dominance.

The aforementioned Gaswick claimed five of the team’s nine interceptions and recovered two of the six fumbles. He returned one of the fumbles 68 yards to set up the Cardinals’ second touchdown in the playoff game.

The 2021 season had another highlight. Lecher passed the 100-win mark as the Cardinals’ head coach and now has a 105-50 record after 16 seasons as program’s leader. His 2007, 2008 and 2009 teams also finished the regular season undefeated. He gives much of the credit for the success to long-time assistants Jamie Slingsby, Mitch Barry and Mike Sandstrom.

Seven girls to wrestle for CHS

For the first time ever, Chadron High School has two divisions in its wrestling season — boys and girls — as this marks the first year the Sta…

With all the mainstays from last year’s Chadron High School boys’ basketball team returning, the Cardinals would seem to be set for an excelle…

Senior Dawson Dunbar carried the ball 157 times for 1,167 yards and 18 touchdowns this fall, helping the Chadron Cardinals to a 9-0 regular-season record and the Class C1-8 district title.

Quarterback Justus Alcorn takes the snap while operating behind one of the Cardinals’ biggest and best offensive lines.  The linemen was made up, from left, of Cody Hall, Shawn Schremmer, Ryan Bickel, Jesse Stolley and Jaret Anderson.  They also were mainstays in the defensive front that helped limit the opponents to 180 yards a game, half what the Cards’ averaged.