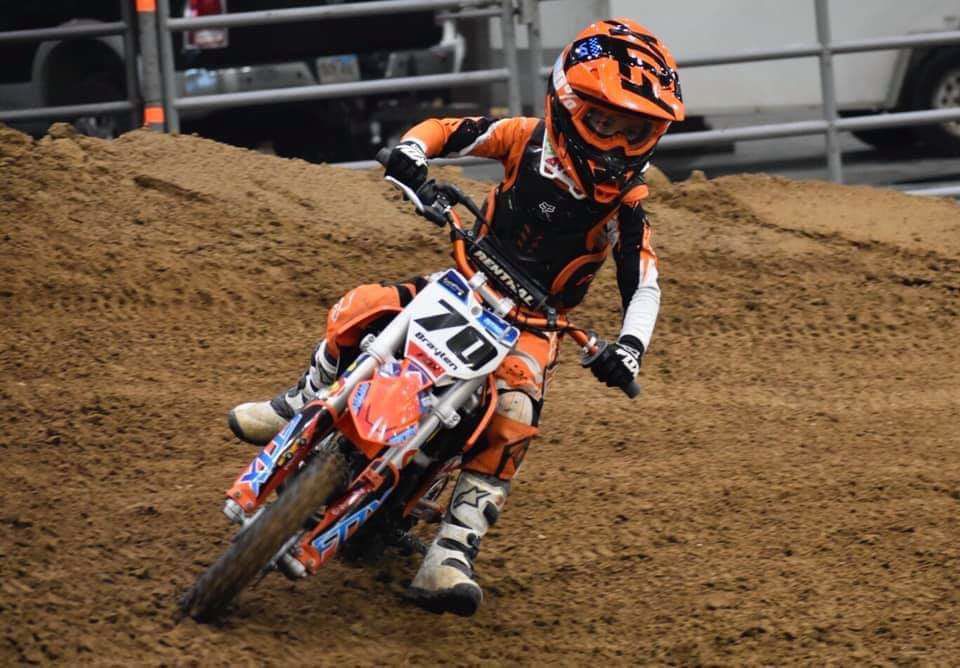 Last year Brayten Brueckner won the 4-6 year old 50cc division in the Open B at the 4Gmx in Rapid City. On Feb. 8 the now seven-year old will travel to San Diego, CA to throw some dirt around Petco Park for the 2020 KTM Junior Supercross. 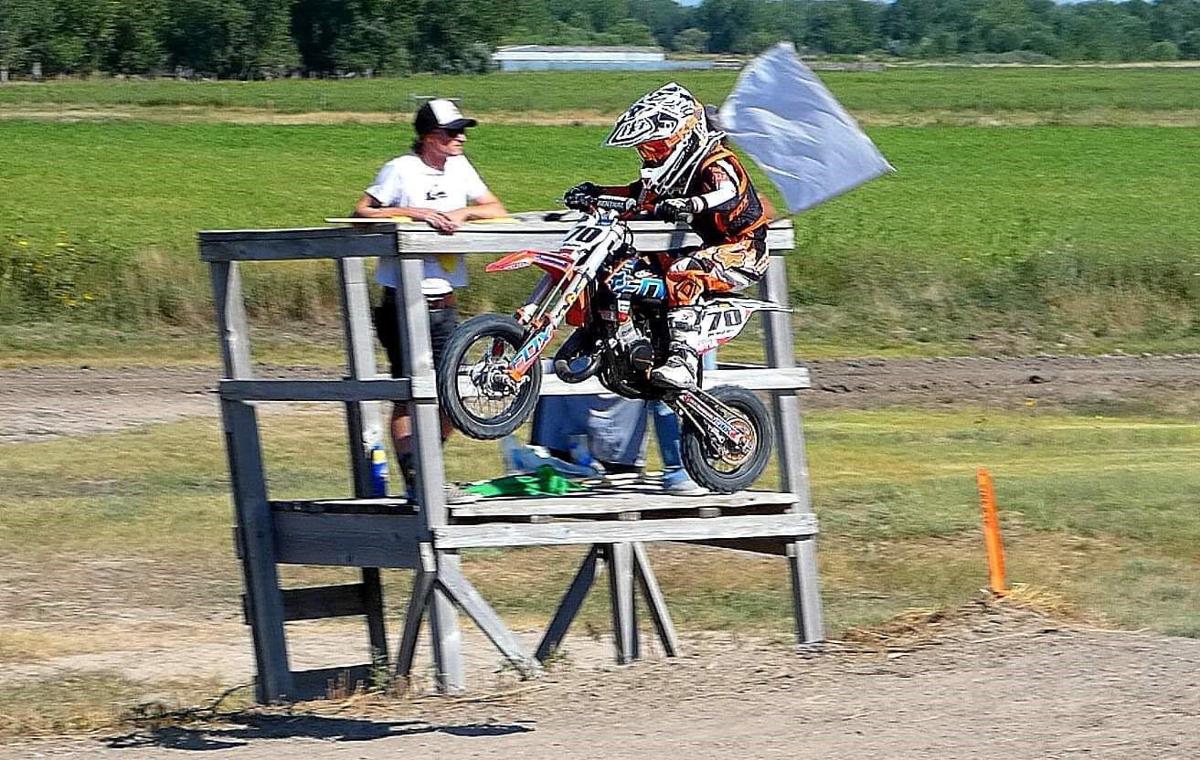 Brayten Brueckner catching some air just like his father, Michael, is doing in a picture from The Chadron Record in 1992. 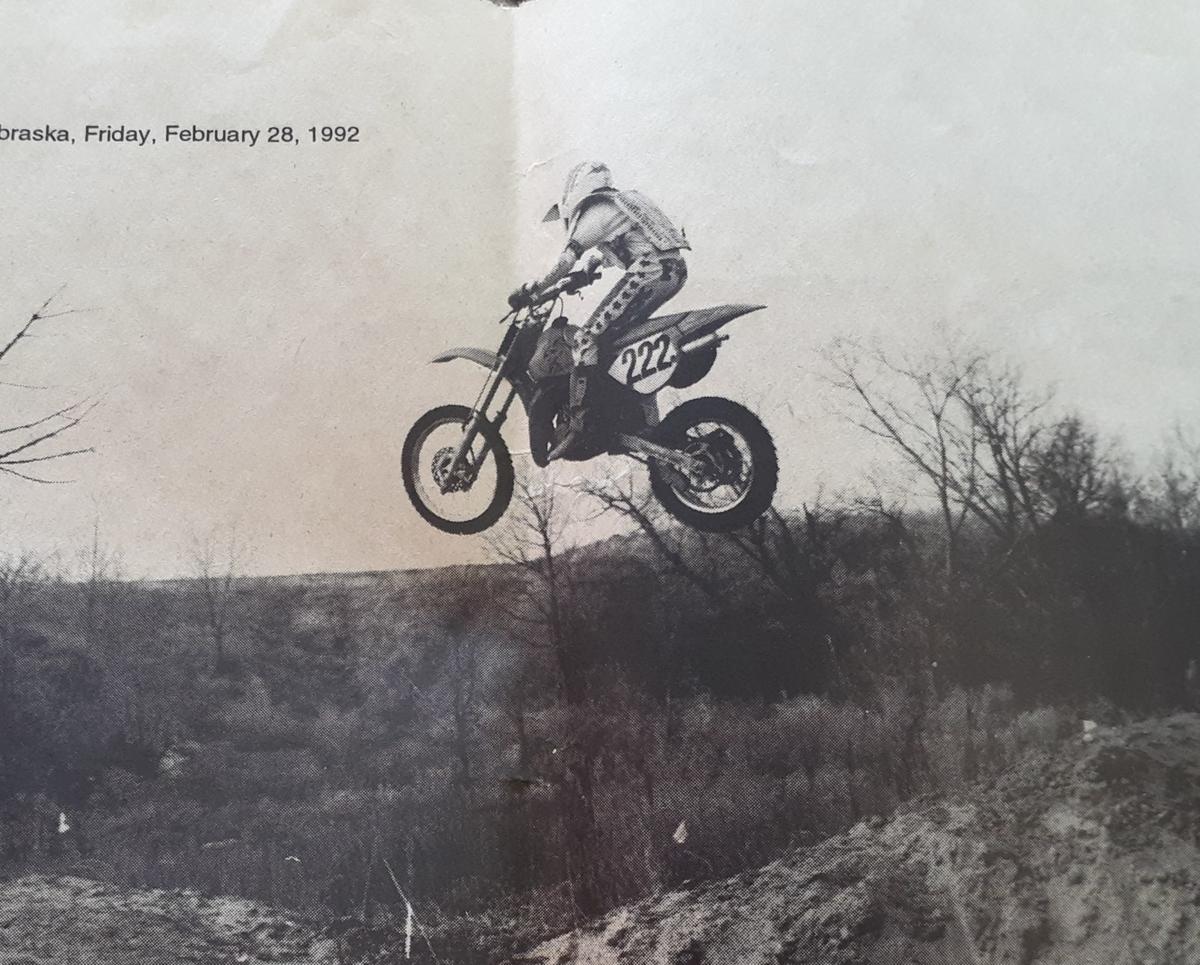 In 1992, The Chadron Record ran an article entitled “Crawford Youth-High on Motocross.” It detailed the accomplishments and aspirations of a young Crawford motocross racer, Michael Brueckner. At 10 years old, Mike was already sponsored by eight companies including Kawasaki, and listed his favorite track as the indoor arena in Greeley, CO. Twenty-eight years later, Mike and Jessica Brueckner’s seven year old son, Brayten, will be competing on Feb. 8 at the 2020 KTM Junior Supercross at Petco Park in San Diego, CA.

The race takes place alongside the Monster Energy Supercross professional circuit which began on Jan. 17. San Diego will be the sixth stop in the 17 race circuit.

Brayten will be racing three laps at Petco Park where the San Diego Padres play all of their home major league baseball games. He will also be supplied a professional-pit crew, a professional pit area, and his own KTM riding kit. Brayten will be hitting the track in a 2020 KTM 50sx bike, which he will be familiar with considering both of his 50cc bikes are 2017 KTM’s.

Brayten competed in his first race at the age of four, and currently contends in the 4Gmx at the James Kjerstad Event Center in Rapid City, SD. Last year he won the 4-6 year old 50cc division in the Open B by taking first in four of the five races, and in 2017 he took second. In 2016 he placed 11th. Seeing the placing dates dates go further and further back one starts to wonder if Brayten walked or rode motocross first. Currently Brayten is competing in three different classes: 50cc (7-8), 50 Open A, and 65cc (7-9). This is his first year competing 65cc, and he has two Yamaha 65 bikes alongside his 50cc’s.

The seven year old speedster also races in Mitchell, Alliance, Sturgis, and Sidney. He likes the Mitchell track the most because it’s a big wide open track. One of the major differences between supercross and motocross is the width of the track. Supercross tracks tend to be indoor, shorter, and narrower.

In order to qualify for the race in San Diego Brayten had to submit a physical, report cards, a resume, height and weight requirements, and a video of him riding and introducing himself. After this the qualified applicants are chosen at random from the hundreds of applications submitted. There will be 15 other racers at the event from all around the world and in the past there have been racers from Italy, Mexico, Australia, and from various countries in Asia.

Going with Brayten will be his mother Jessica, father Michael, and his sister Brielle. When Jessica was asked about the anxieties of watching Brayten race as a mother she said she doesn’t get as nervous as one might think: “I actually really love watching him race. He is a really smart racer, and is very calculated in the things that he does. You see a lot of kids race wild on the track and I am actually more nervous for them.” She went on to mention several times that her son is “calculated” on the track, and this goes to show that all sports can be turned into a chess game no matter how much horsepower is involved.

It means a great deal to her for Brayten to have an opportunity like this so early in his life, and it will also be a great event for her family: “It was just something that we wanted. It was kind of a ‘long shot.’ It will be our kids first time in an airplane, and it will be one of our first family vacations.”

In the 1992 article on Brayten’s father, Michael, it was noted that he seemed “to live, eat, think, breathe and talk bikes” and that he watched a “library of videotapes of his races and practices.” Jessica says that “Michael and Brayten do ride together occasionally, but mostly he just likes to watch him these days!” One thing is for sure, after Brayten races his three laps on NBC Sports on Feb. 8 around 8:00pmMT he will have a monumental video tape to perhaps place beside those of his father.

The Chadron State College softball team defeated each of the co-hosts during the Edmund Regional Festival in Edmond, Okla., last weekend, but …

The CHS wrestling squad qualified three wrestlers for state this past weekend at the Class B District 4. The three qualifiers were Paige Denke…

The Crawford and Sioux County girls and boys basketball teams moved one step closer to sub-districts on Feb. 11 when they faced each other in …

Eagles have many bests at SDSU Meet; Roden sets 200 record

Last year Brayten Brueckner won the 4-6 year old 50cc division in the Open B at the 4Gmx in Rapid City. On Feb. 8 the now seven-year old will travel to San Diego, CA to throw some dirt around Petco Park for the 2020 KTM Junior Supercross.

Brayten Brueckner catching some air just like his father, Michael, is doing in a picture from The Chadron Record in 1992.