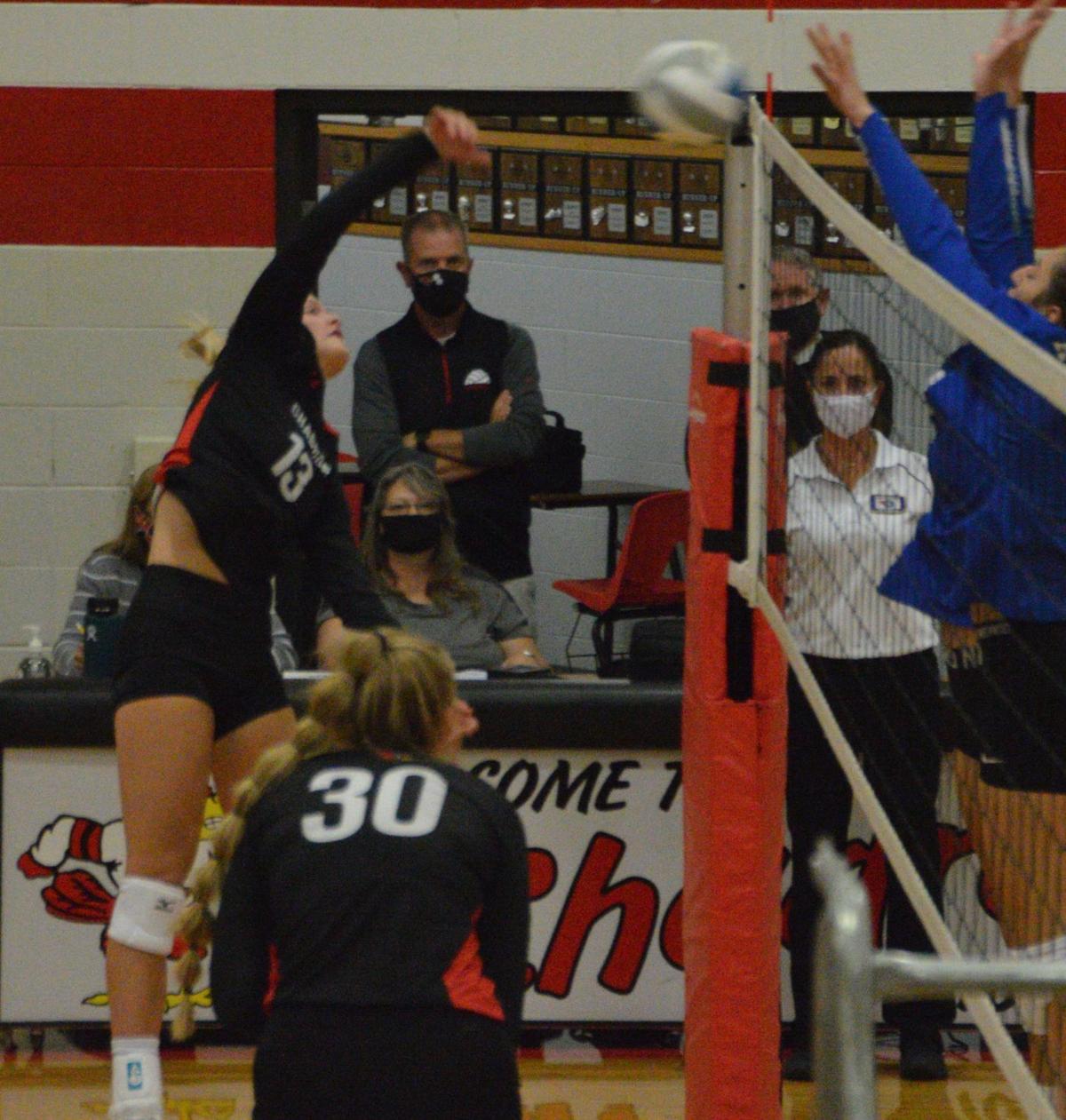 Freshman Demi Ferguson attacks the net against a Bulldog during the Alliance-Chadron match. Ferguson had five kills across the three sets. 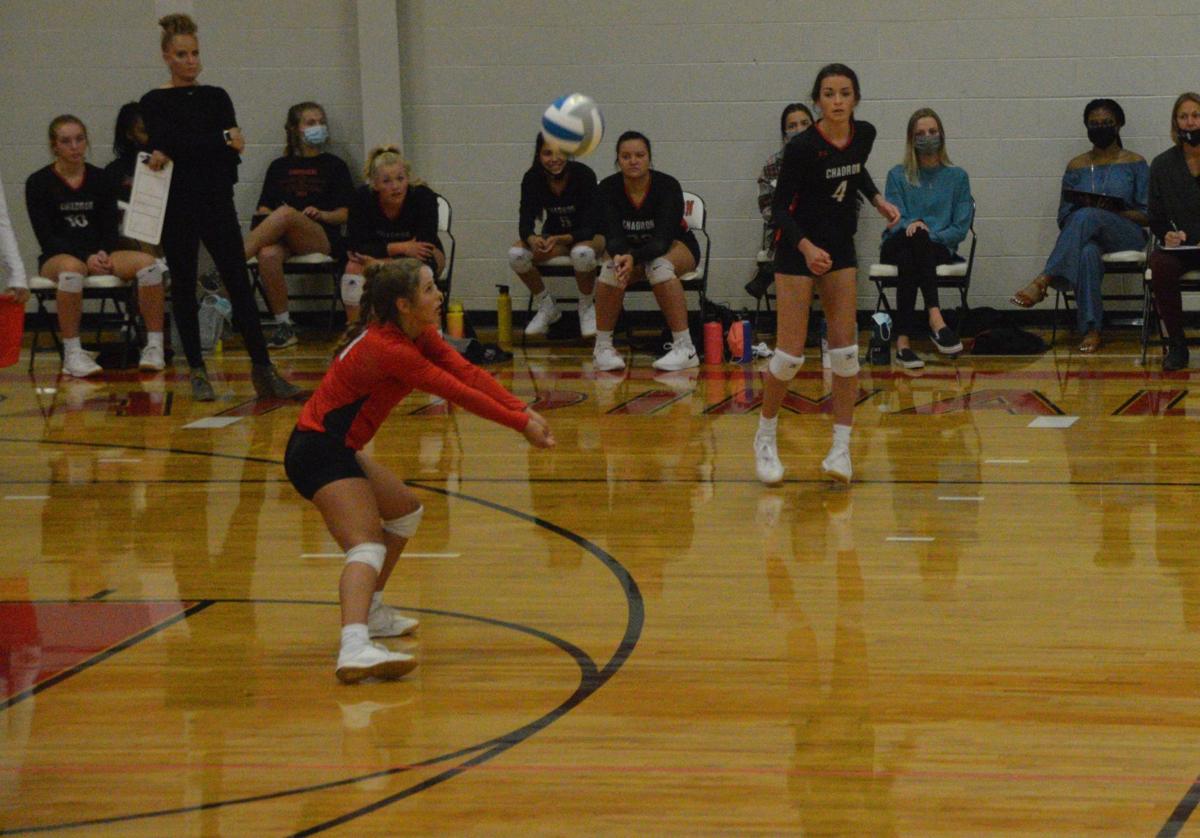 Junior Jacey Garrett gets in a dig as freshman Jaleigh McCartney is ready to assist, during last week's home match against Alliance. Garrett got in 14 of Chadron's 55 digs. 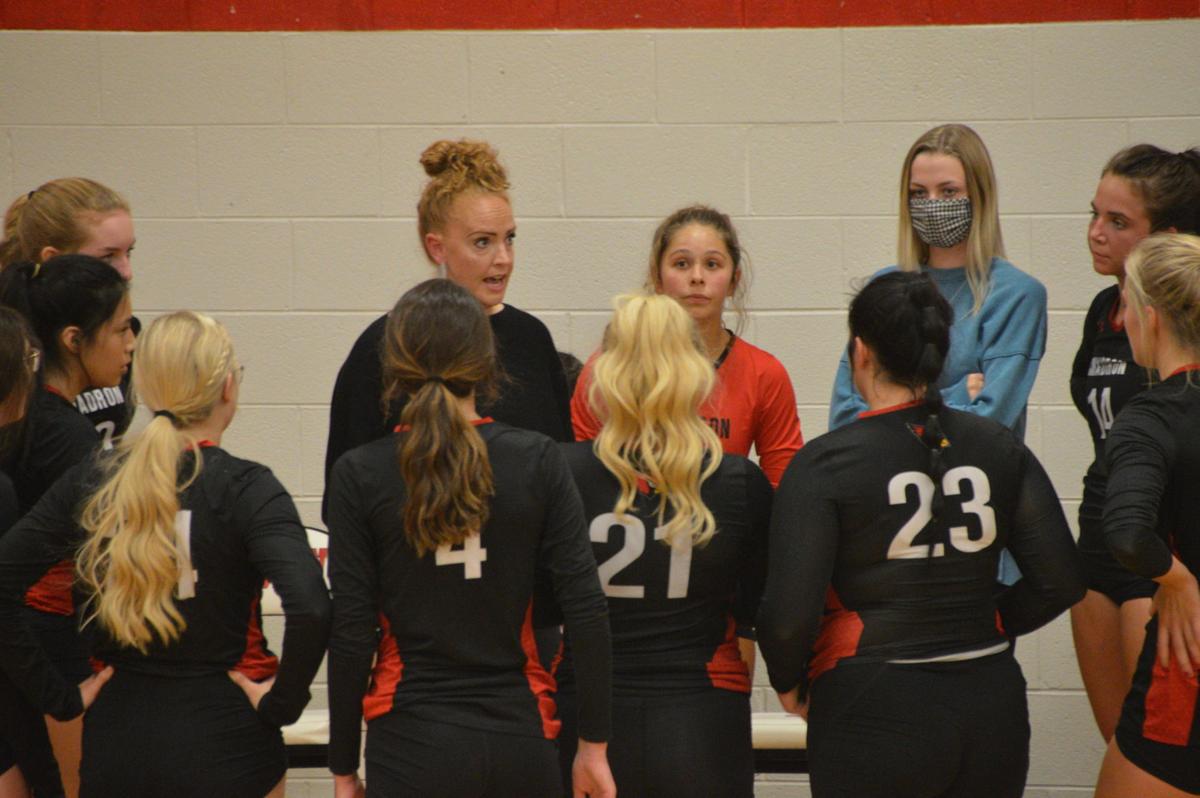 Coach Blakelee Hoffman gets a game plan together with the Cardinals during their match against Alliance.

Chadron Volleyball saw their first home match in the Bird Cage on Sept. 8, and unfortunately a break in their undefeated record as the Alliance Bulldogs swept them 3-0 — 20-25, 21-25 and 20-25.

Coach Blakelee Hoffman said it unfortunately just wasn’t the Cardinals’ night and there wasn’t a lot going their way. In the past couple years, she added, Alliance has become a very strong team and one Chadron has always played tight. The sweep was a first for Alliance in four years, and post-game Hoffman told the girls that such matches can happen. She’s hopeful this is the first and only time and encouraged the team to shake it off and get ready for their next match at Gering.

Hoffman also noted Alliance is a beatable team, and the Cards showed great teamwork on their court, communicating, assisting and setting each other up to keep the ball in play. “We made some really great plays,” the coach said, “but unfortunately it seemed [Alliance] knew just where to be.” Having Anika Burke up front gave the Cardinals some strength, with Burke nailing eight kills out of 20 attempts across the three sets.

Hoffman said the girls did well in putting up their blocks and in their passing game. She noted senior Jalei Marcy, who had 15 serve receptions, passed the ball well. Jaycee Garrett was strong on defense as well, she noted, with 26 receptions and 14 digs.

The coach was also impressed with Nia Meyer’s performance, though the Cardinal was in a different role. Hoffman explained Meyer is typically on outside or right side in back, but provided six dig and four receptions playing middle back against Alliance.

Though not her regular spot, Hoffman said Meyer’s playing middle back was something she put in to play in the Cardinals’ win against Gordon-Rushville. She wasn’t worried, however, as Meyer is a senior and knew the position.

Hoffman told the girls they have a lot to learn from the loss — whether it be in communication or hanging their heads — and know where they can improve.

Coach Hoffman said, “We just couldn't get into rhythm in the first two sets, but were able to pick it up in the last two. Unfortunately, our serve receive struggled in the fourth set which really dug us a hole. Looking forward, we'll continue to strengthen our serve receive; it's having a huge effect on our attacking game.”

The Cardinals had a total 81 receptions, with junior Jacey Garrett leading with 32. Other top receivers were senior Kaelee Long with 20 and freshman Jaleigh McCartney with 17.

Senior Emma Cogdill led the way on assists, with 26 of the team’s total 29. Cogdill was also one of the team’s top diggers, hitting 14 of 87. Others nailing big dig numbers for the team were Garrett with 25 and McCartney with 12.

On offense, it was junior Macey Daniels taking the top spot with 11 of the team’s 31 kills, and senior Kacey Kittell led on aces with four of Chadron’s nine.

The Cardinals were scheduled for a triangular with Sidney and Bridgeport on Tuesday, Sept. 15, and at Gothernburg Sept. 18-19. Their next home match is against Scottsbluff on Thursday, Sept. 24.

The Chadron High School football team received a setback on Friday, but it didn’t come on the field.

The fourth annual Grey Eagle Warrior Challenge is set for Saturday, Sept. 26 in Chadron. The event challenges contestants' abilities with a 5K…

After trailing 21-14 early in the third quarter, the Chadron High football team scored the final three touchdowns Friday night to slip past Go…

After losing six straight games while being outscored 70-13, the Chadron High School softball team won its final two games at the Twin Cities …

Freshman Demi Ferguson attacks the net against a Bulldog during the Alliance-Chadron match. Ferguson had five kills across the three sets.

Junior Jacey Garrett gets in a dig as freshman Jaleigh McCartney is ready to assist, during last week's home match against Alliance. Garrett got in 14 of Chadron's 55 digs.

Coach Blakelee Hoffman gets a game plan together with the Cardinals during their match against Alliance.