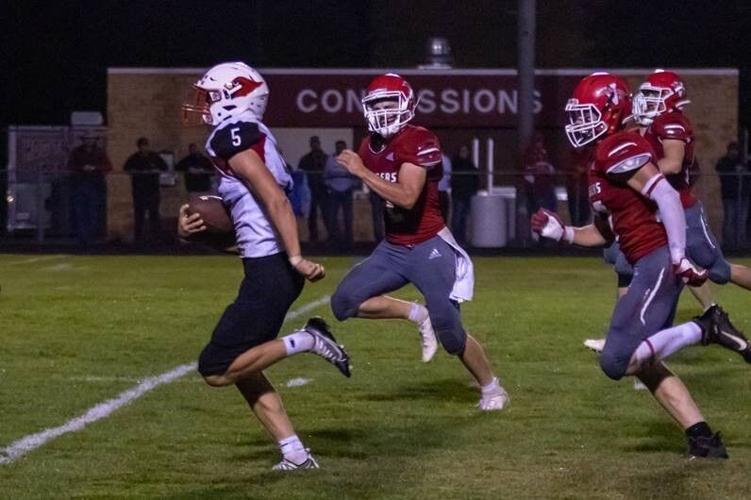 Chadron fullback Gage Wild carried the ball just once, but it resulted in 45-yard touchdown jaunt in the fourth period while the Badgers chased him. He also took part in 18 tackles during the 42-21 victory. 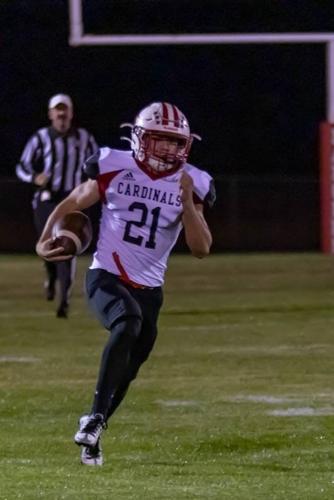 Sophomore Quinn Bailey broke loose for an 81-yard touchdown run on the first play from scrimmage Friday night in Valentine.  He also scored on a five-yard run and rushed 19 times for 177 yards.

Due to a welcomed rainstorm of at least an inch that was accompanied by lightning, the Chadron-Valentine football game in the Heart City on Friday night was delayed by an hour and a half. But as was noted by KCSR Radio Sports Director Jeremy Anderson, the first play from scrimmage after kickoff finally happened, brought some thunder.

It was an 81-yard touchdown jaunt by sophomore tailback Quinn Bailey that immediately put the Cardinals on the victory trail. Bailey broke through the middle of the line, then cut to the outside and went down the north sidelines ahead of his pursuers.

Valentine, now also 3-1, tied the score on its first possession, but in a much more deliberate fashion. The Badgers ran the ball 20 times to go 78 yards. Quarterback Aston Lurz went the final half yard after he and running back Bryan Keller pretty well took turns carry the ball out of the hosts’ veer offense. To long-time fans, it is reminiscent of the “belly-series.” The drive lasted more than 10 minutes.

The Cardinals also scored on their next three possessions, all in the second quarter, to own a 28-7 halftime lead.

Their first of the three came 1 ½ minutes into the second stanza when Bailey went the final five yards during a 75-yard march. Berry launched it with a 29-yard burst and Malachi Swallow went 18 on the next play.

Valentine tried to punt on its ensuing possession, but the snap from center was in slow motion, and the Bailey got to punter just as the ball was arriving, and knocked him down inside the Badgers’ 20. Valentine was soon assessed a 15-yard face mask penalty. Two plays later, Malachi Swallow, scored from the seven.

Just 2 ½ minutes later, the Red Birds were on the scoreboard again, on a 30-yard pass from quarterback Broc Berry to Xander Provance, who made a one-handed grab and outran the pursuers to the end zone. Provance also took a handoff and ran for the conversion, to take up the slack for the PAT kick that was wide after the previous TD.

Valentine demonstrated its scrappiness by scoring the first two touchdown in the second half to close the difference a single possession. The Badgers nearly duplicated their first quarter touchdown drive by going 77 yards in 13 plays while using half the time off the clock of the third period.

Chadron launched its next possession with runs of 16 yards by Bailey and 13 by Swallow, before losing a fumble that was recovered by the Badgers’ Seth Vavra. But just as the fourth period began, Valentine also fumbled and Provance corralled it for the Cardinals.

However, that drive sputtered and the Cards were forced to punt for the only time. Just as had happened to Valentine in the first half when the snap from center was pokey, the results were disastrous for the visitors. The Badgers blocked the attempt and took possession at the Chadron nine.

Despite a holding call against them, the Badgers scored when the courageous Lurz dove the final three yards to the end zone, making the score 28-21 with nine minutes left to play. Coach Mike Lecher was not pleased with the situation.

But his team finished strong and won by a two-to-one margin on the scoreboard. The gusto returned with 6:24 remaining when fullback Gage Wild, surprised the host, taking the handoff for the only time and sprinted 45 yards untouched to the west end zone

A couple of holding calls negated Valentine’s ensuing drive, and the Cardinals took possession at midfield on downs. The visitors also were called for holding three times after taking over, but overcame the first two when Berry hit Bailey with a 37-yard strike and negated the final hold when Berry broke loose for a 34-yard gallop to the end zone with 55 seconds remaining.

Followed the game, Lecher congratulated his team on the win, said they played hard, but chastised them for the dozen penalties for 110 yards that they absorbed.

“The game started an hour and a half late because of the rain and we had to play an extra 45 minutes because of all the penalties,” he said. “We’ve got to clean that up.”

The Cards finished with 391 total net yards, 320 of them rushing, for almost 10 yards a play. Bolstered by his 81-yard romp to open the game, Bailey carried 19 times for 177 yards and Berry five times for 83.

Valentine rushed an amazing 62 times, nearly twice as many as the Cards, for 213 yards. Lurz kept the snap 28 times while gaining 117. The Badgers’ ability to keep plugging away led to lots of tackle opportunities for the Cards. Provance, Wild, Seth Gaswick and Caden Buskirk were all credited with double-digit tackles.

Chadron used a new placekicker in its fourth game of the season. Junior Gunnar Lans did the honors, and made four of his five extra points tries.

Next up for the Cards is a trip to Gothenburg for a Friday afternoon game. The Swedes got their first win 35-20 over Alliance last Friday night. They had previously lost to Ogallala, McCook and Adams Central, which have a combined 10-2 record.

The Chadron Cardinals didn’t have as many big plays from the line of scrimmage or on kick returns as has become their trademark, but still acc…

The Lady Cards brought plenty of energy to The Bird Cage on Tuesday, Sept. 27, as they swept the Gordon-Rushville Mustangs 3-0 with scores of …

Twins Jake and Justin Chasek attend different colleges, but they joined forces to win the team roping last weekend at the rodeo hosted by Cent…

After winning the team title at its own home meet and at Alliance the previous two weekends, the Chadron High School girls’ cross country team…

While shooting its best team score of the year, the Chadron High School girls finished third at the Western Conference Tournament hosted by Al…

The Cardinals had a rough time with the Scottsbluff Bearcats last Thursday in The Bird Cage. Though Chadron was able to get some momentum goin…

With 15 teams participating, there was plenty of competition at the girls’ golf tournament hosted by Ogallala on Tuesday, Sept. 20. The Chadro…

Chadron fullback Gage Wild carried the ball just once, but it resulted in 45-yard touchdown jaunt in the fourth period while the Badgers chased him. He also took part in 18 tackles during the 42-21 victory.

Sophomore Quinn Bailey broke loose for an 81-yard touchdown run on the first play from scrimmage Friday night in Valentine.  He also scored on a five-yard run and rushed 19 times for 177 yards.