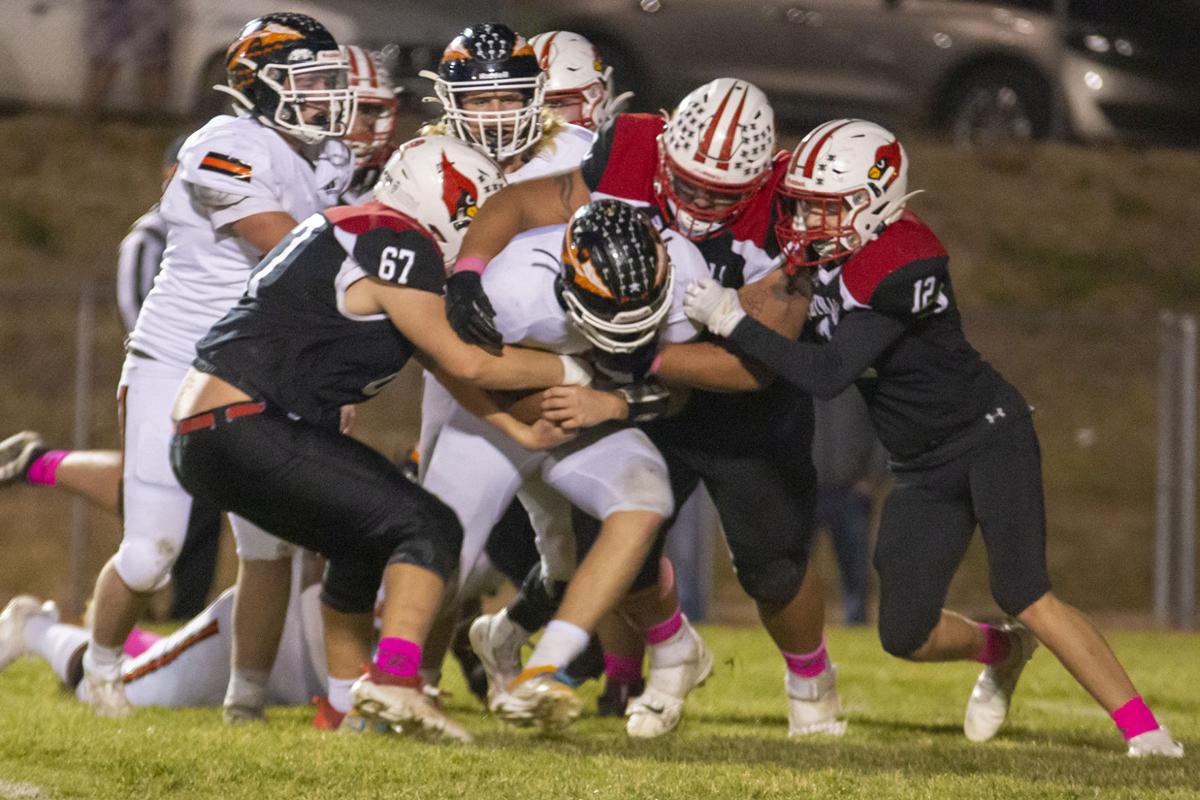 The Chadron High defense proved to be stout again against Ogallala on Friday night, as this photo illustrates.  It shows, from left, Cody Hall, Jesse Stolley and Gage Wild putting the clamps on Ogallala’s Cameron Zink.  The Indians managed just two first downs in the second half. 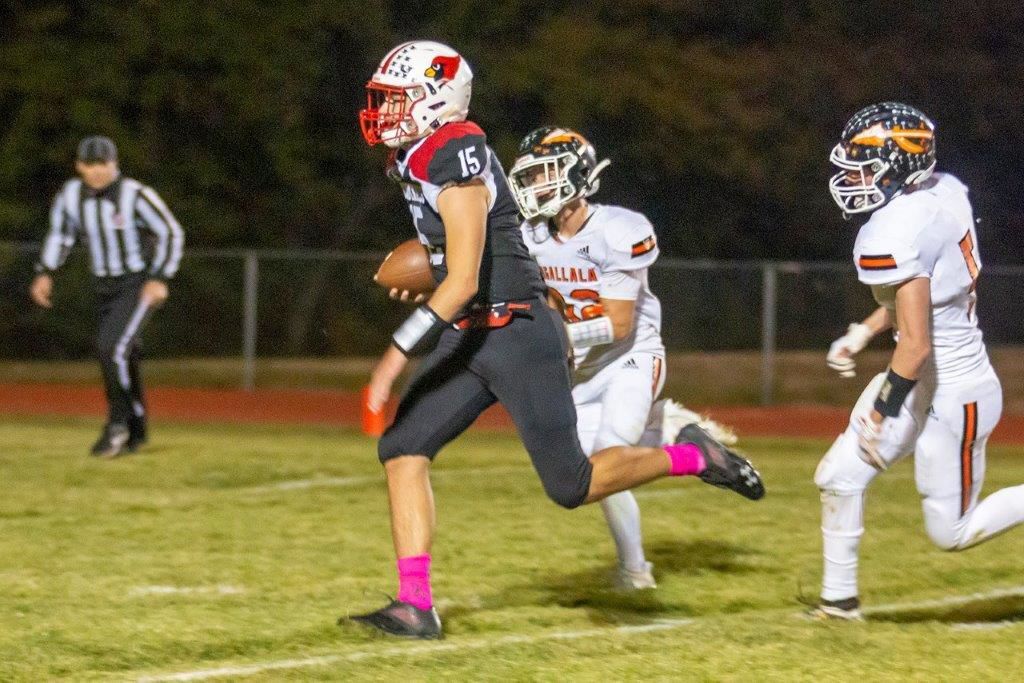 Chadron High quarterback Justus Alcorn reeled off touchdowns runs of 30 and 27 yards about 2 ½ minutes apart in the third quarter as the Cardinals broke the game with Ogallala wide open. Earlier in the period, Alcorn and Seth Gaswick teamed up on a 33-yard scoring pass.

After trailing 8-7 at halftime, the Chadron High School football team came alive in the second half to handily defeat the Ogallala Indians 35-8 on the Cardinals’ home field under a full moon last Friday night.

The Cards, ranked No. 4 in Class C-1 by both the Omaha and Lincoln newspapers last week but are now No. 3, have a 9-0 record and will host a game Friday afternoon when the state playoffs begin. This team is the 15th in Chadron High history that has finished the regular season without a loss. (See accompanying story.)

A pair of touchdown runs by quarterback Justus Alcorn in the fourth quarter after he’d also hit Seth Gaswick with a TD pass in the third frame put the Cardinals in charge and sealed the verdict.

The Cardinals got the game off to a great start when Alcorn launched a pass as he was being chased out of bounds, and it was grabbed by Xander Provance, who spun around and took the ball about 30 yards farther downfield to the Ogallala 10 to make it a 56-yard play. Three snaps later, tailback Dawson Dunbar went the final seven yards to the end zone.

Ogallala scored late in the first quarter after Cole Stokey intercepted Alcorn’s pass and returned it about 20 yards to the Chadron 21. Two plays later, Harry Caskey, the Indians’ quarterback, went up the middle for 14 yards. He scored one play later on a similar play. Caskey passed to Cameron Bush for the two-point conversion, putting the Cardinals behind for the first time all season.

Midway in the second quarter, Caskey carried for 19 yards and tailback Cameron Zink gained 22, punching the ball deep into Chadron territory. But the Cards’ defense stopped the threat about a foot shy of the goal line.

While Chadron fans were understandably uneasy at halftime, the second half belonged almost entirely to Coach Mike Lecher’s Cardinals. They initially scored on the 33-yard pass from Alcorn to wide receiver Seth Gaswick, who tight-roped his way down the west sidelines about 25 yards to the end zone with just under seven minutes remaining in the third period.

The Cards were in complete control in the fourth when Alcorn posted the first two of three touchdowns on runs of 30 and 27 yards and Dunbar went the last four yards for the third score.

Alcorn’s touchdown jaunts appeared to be carbon copies. Both times he faked handoffs to Quinn Bailey and Dunbar, but kept the ball and headed to the end zone nearly unmolested. After carrying out his fake, Bailey blocked the Ogallala linebacker to help Alcorn break free.

The Cards got possession the second time when Ogallala receiver Ayden Halligan fumbled away a 29-yard pass that had carried to midfield. Dunbar made the recovery.

A determined 15-yard carry by Bailey preceded Dunbar’s TD that came with 3:12 to play. The Indians had turned the ball over on downs at their own 30 after failing to complete a pass when it was fourth down and nine.

Gaswick, who also had a 35-yard punt return although a penalty for a blindside block reduced it to 20 yards, was perfect on all five extra point attempts.

Cody Hall’s back-to-back punts of 62 and 40 yards helped the Cardinals have favorable field position in the second half, forcing the Indians to take possession at the Chadron nine- and six-yard lines.

Lecher said that while going undefeated is always special, the victory clinched the home date in the first round of the playoffs and should have given the Cards a more favorable seed. Time will tell about the latter. It will be the Chadron’s 32nd playoff appearance.

“Now the fun begins,” the coach noted. “But first we have to work hard. The better we prepare the better we’ll play.”

Texas teams a trifle better than Eagles in openers

Eagles back home on Sunday

Eagles wrap up season with 57-6 victory

The Chadron High defense proved to be stout again against Ogallala on Friday night, as this photo illustrates.  It shows, from left, Cody Hall, Jesse Stolley and Gage Wild putting the clamps on Ogallala’s Cameron Zink.  The Indians managed just two first downs in the second half.

Chadron High quarterback Justus Alcorn reeled off touchdowns runs of 30 and 27 yards about 2 ½ minutes apart in the third quarter as the Cardinals broke the game with Ogallala wide open. Earlier in the period, Alcorn and Seth Gaswick teamed up on a 33-yard scoring pass.