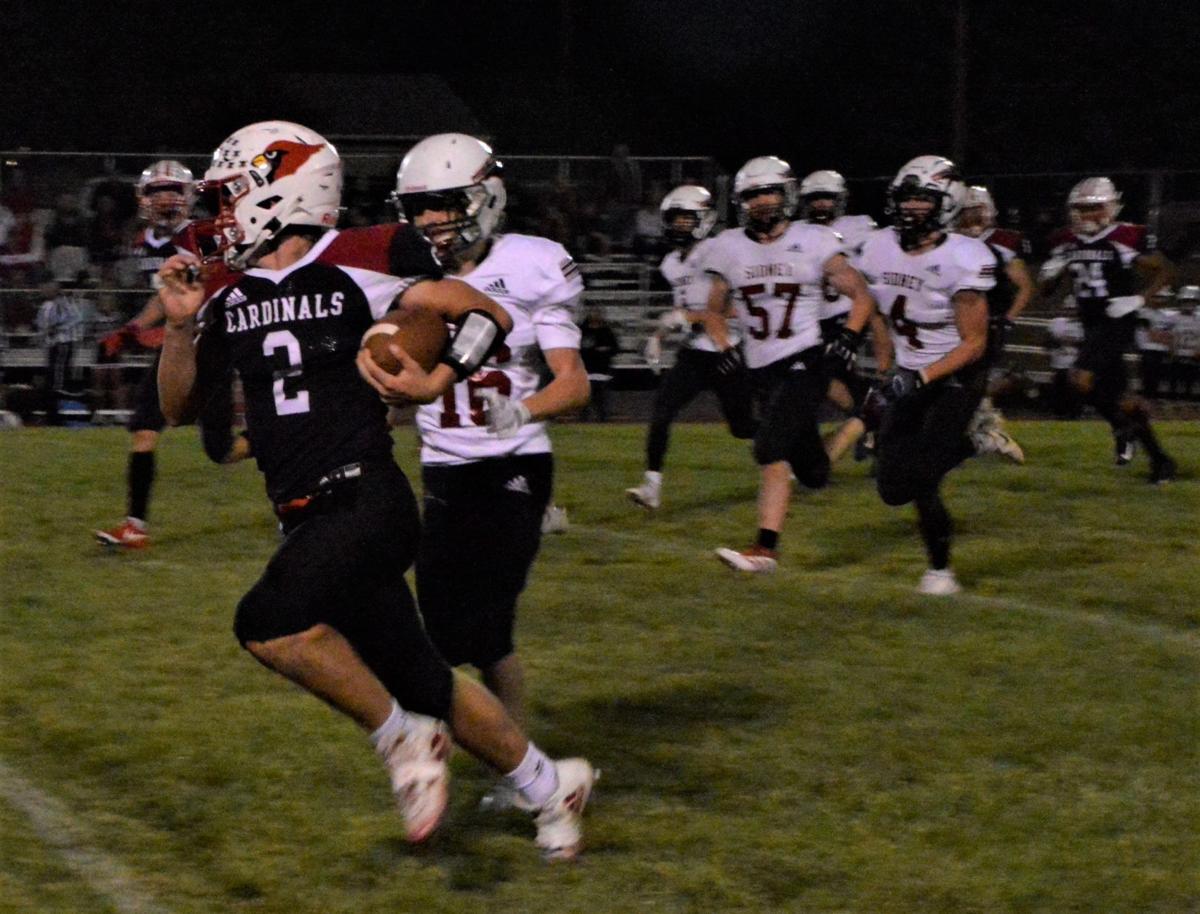 Dawson Dunbar leads a pack of Red Raiders on his way to the endzone. Dunbar made three of the Cardinals' touchdowns in their commanding win against Sidney. 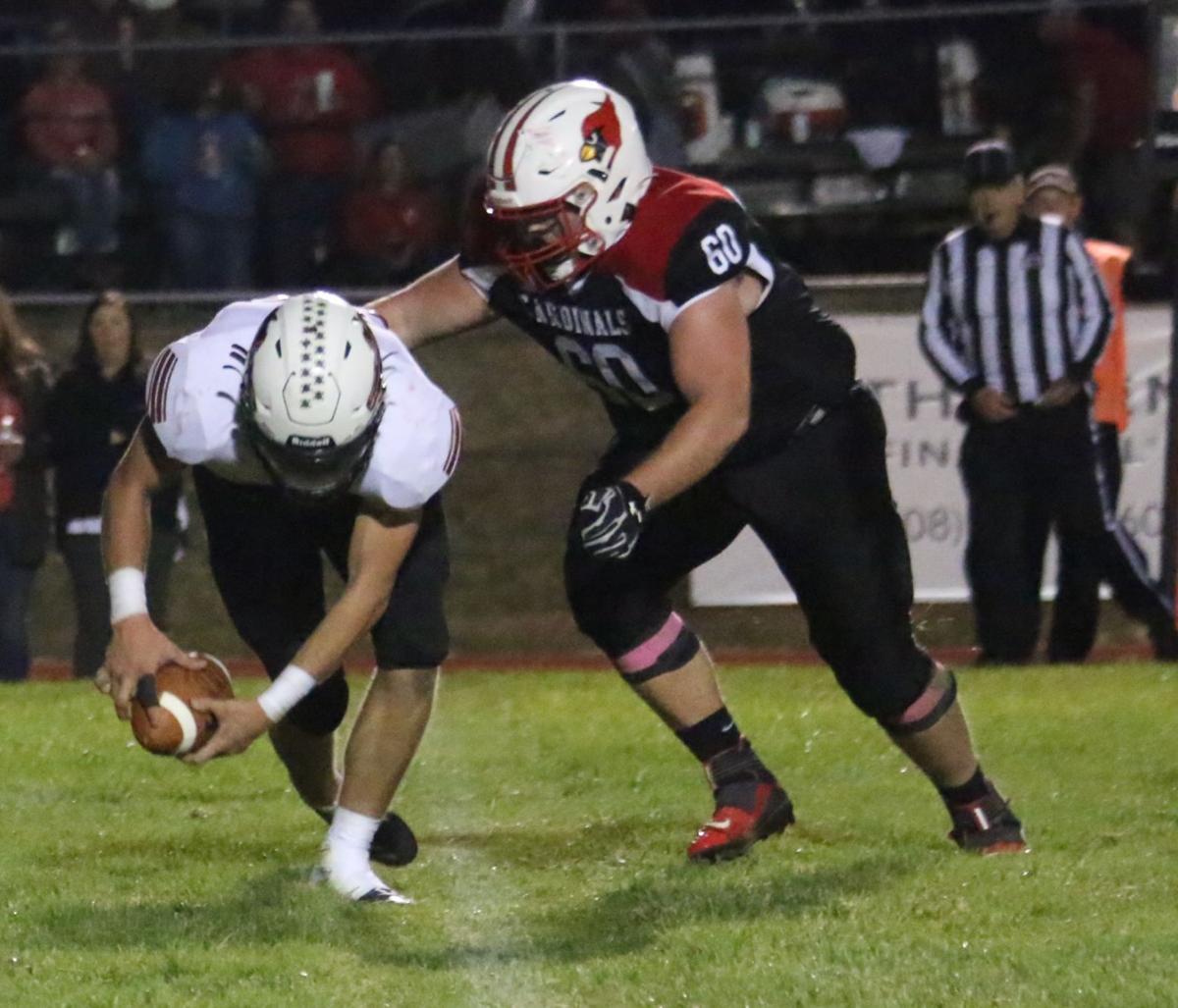 Chadron High defensive lineman Ryan Bickel zeroes in on Sidney fullback Nathan Kennedy, who is trying to retrieve the handoff he had dropped in Friday night’s game at Cardinal Field.  Bickel and Kennedy are among the biggest players on their teams, so the collision was significant.

With the offensive line helping pave the way and the defense holding down the fort, the Chadron High football team continued to ramble Friday night, defeating Sidney 35-6 at Cardinal Field.

The Cardinals, who moved up to No. 7 in the Omaha World-Herald’s Class C-1 standings this week, scored 14 points in each of the first two quarters to lead 28-0 at halftime and outpointed the Red Raiders 7-6 in the second half while improving their record to 6-0. The Red Birds have outscored their foes by 101 points--128 to 27—so far this fall.

The Cards got off to a fast start when Xander Provance returned the opening kickoff 58 yards down the middle to the Sidney 28. Dawson Dunbar then carried for 15 and 13 yards on consecutive plays to the end zone. Seth Gaswick kicked the first his five extra points to make it 7-0 with only 49 seconds off the clock.

It was the first of Dunbar’s three touchdowns as he carried the ball 22 times for 197 yards, both career highs. Following the game, Lecher said Dunbar didn’t get the ball enough the previous Friday night at Mitchell, when he carried only five times for 86 yards, and the coaches decided he would be busier against Sidney.

The shifty senior tailback has now rushed 83 times for 857 yards to rank among the top five ball carriers in Class C-1 this fall.

With Dunbar getting the ball much more versus the Red Raiders, the Cards’ passing game wasn’t as prevalent as usual. They completed just three of nine tosses for a meager 19 yards. However, it was demonstrated rather early that the team has been working on its aerial attack in practice.

The Cardinals led off their second possession with a 17-yard run by Dunbar, but after reaching the Sidney seven yard line 10 plays later, it was fourth and goal, a perfect time to pass.

That’s what the Cards did, but it wasn’t “business as usual.” The play saw Provance take a pitch from quarterback Justus Alcorn and then lob the ball over the head of a Sidney defender to Alcorn. But the Raiders defended the ploy well and tackled Alcorn two yards shy of the end zone to blunt the scoring threat and take possession.

However, the Cardinals scored moments later. Sidney got zip on a running play, threw an incomplete pass on the second attempt and fumbled the third try. Chadron defender Cody Hall claimed the loose pigskin in the end zone for the touchdown. Hall said it was Dunbar, a linebacker on defense, who delivered the hit that forced the bobble. After the PAT, Chadron led 14-0.

The Cardinals made it 21-0 just 14 seconds into the second quarter, when Dunbar scored his second TD by going 18 yards on a sweep. He’d also closed out the first frame with a 20-yard jaunt.

Sidney threatened midway in the second, when Patrick McCartney, a rangy freshman, went high and grabbed a pass for a 38-yard gain to the Cardinals’ 25. On the next play, Austin Wolfe, the player who had fumbled in the end zone, took the ball to the 11, but that’s as close as the Raiders got.

With just a minute remaining before halftime, Chadron cornerback Chayton Bynes picked off quarterback Arik Doty’s pass at the Sidney 37. The visitors were penalized 15 yards on the next play and Dunbar promptly gained 10. The Cards scored on the only two passes they completed the rest of the night. Alcorn connected with Quinn Bailey for nine yards and followed with a four-yard toss to Provance for the TD with 44 seconds left on the clock. The PAT made it 28-0 at intermission.

There wasn’t as much fireworks in the second half. The Cardinals scored late in the third period. Gaswick returned a punt 15 yards, then picked up 12 on an end-around run. Next up, Alcorn romped 28 yards up the middle to the Sidney eight. Dunbar lost a yard on the following play, gained seven on the next one and scored on the third run.

With the score 35-0, the clock was running full-time in the final frame. Penalties were prevalent. There were six of them, three against each side.

Two against Chadron were back-to-back for 23 yards and helped the Red Raiders score their only touchdown. After a pass interference call versus the Cardinals that put the ball on the home team’s 30, fullback Nathan Kennedy ran 16 yards over his right side against a group of predominantly alternate defenders.

The second infraction moved the ball half the distance to the goal line and Kennedy, a burly specimen who packed the ball 21 times for just 47 yards, went the final seven. A run for the extra point failed.

The Cardinals could have scored again after reserve tailback Malachi Swallow gained 21 yards on three carries and Bailey had runs of five and 11 yards, putting the pigskin on the Sidney six. That’s when the Cards went into the victory formation for the final two snaps as time expired.

Lecher basically told his charges as they huddled to keep up the good work and that he was proud of them.

The Cards visit Alliance on Friday night. The Bulldogs are 0-6 but would consider their season a success if they could somehow spring an upset. Kickoff is set for 7 o’clock.

Seven former Chadron State athletes will be inducted into the college’s Athletic Hall of Fame on Saturday, October 23 following the Eagles’ fo…

It’s showdown time, or at least the first of two vitally important season-ending events, for the Chadron High School cross country teams. The …

Dawson Dunbar leads a pack of Red Raiders on his way to the endzone. Dunbar made three of the Cardinals' touchdowns in their commanding win against Sidney.

Chadron High defensive lineman Ryan Bickel zeroes in on Sidney fullback Nathan Kennedy, who is trying to retrieve the handoff he had dropped in Friday night’s game at Cardinal Field.  Bickel and Kennedy are among the biggest players on their teams, so the collision was significant.