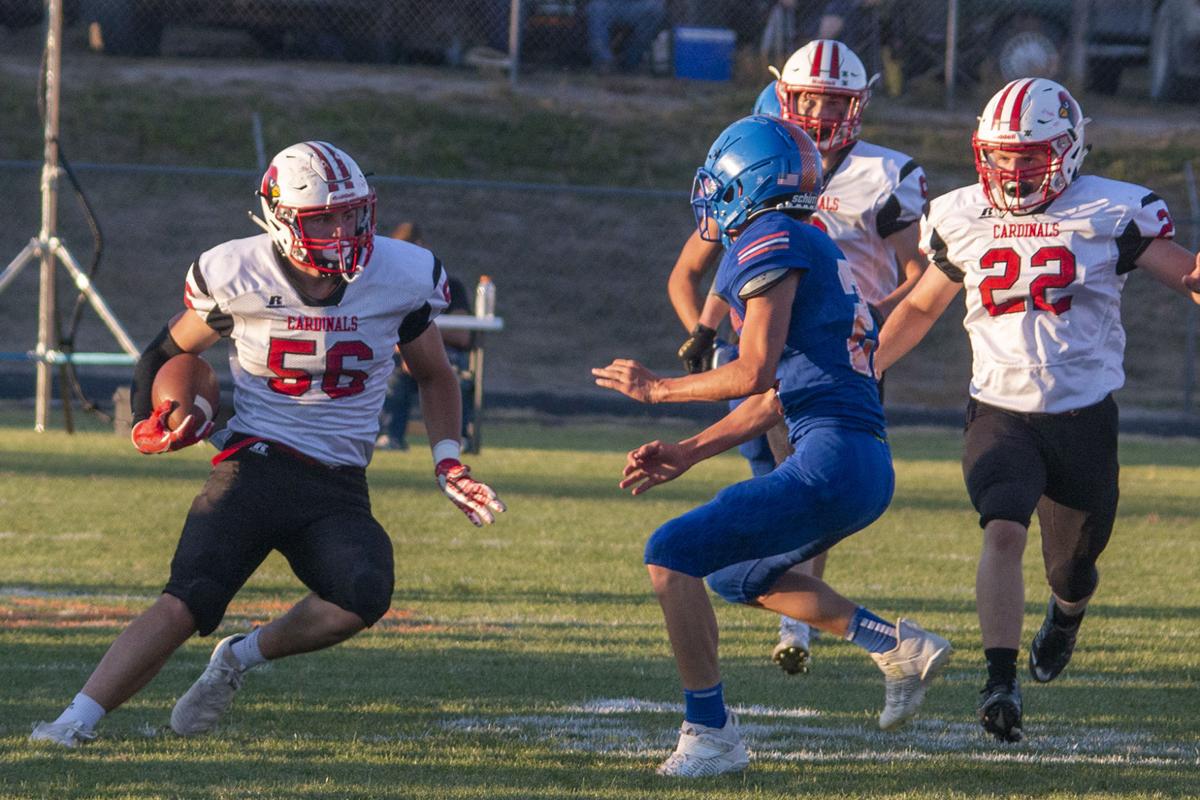 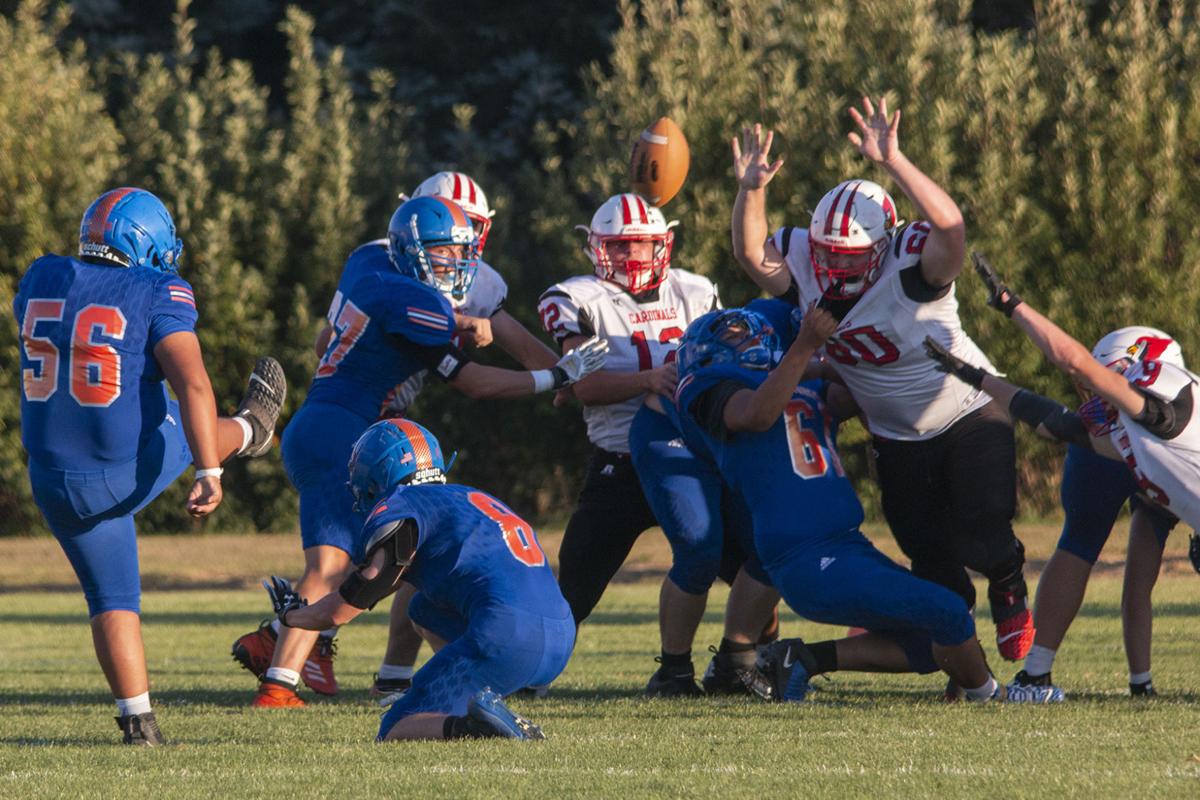 Ryan Bickel (60) looks to block a kick from Mustang Michael Perez while Atreyo Thorson tries to bring him down and Cardinal Tallon Craig. Among the Cards providing some extra defense wereTallon Craig (9) and Sawyer Haag (12). 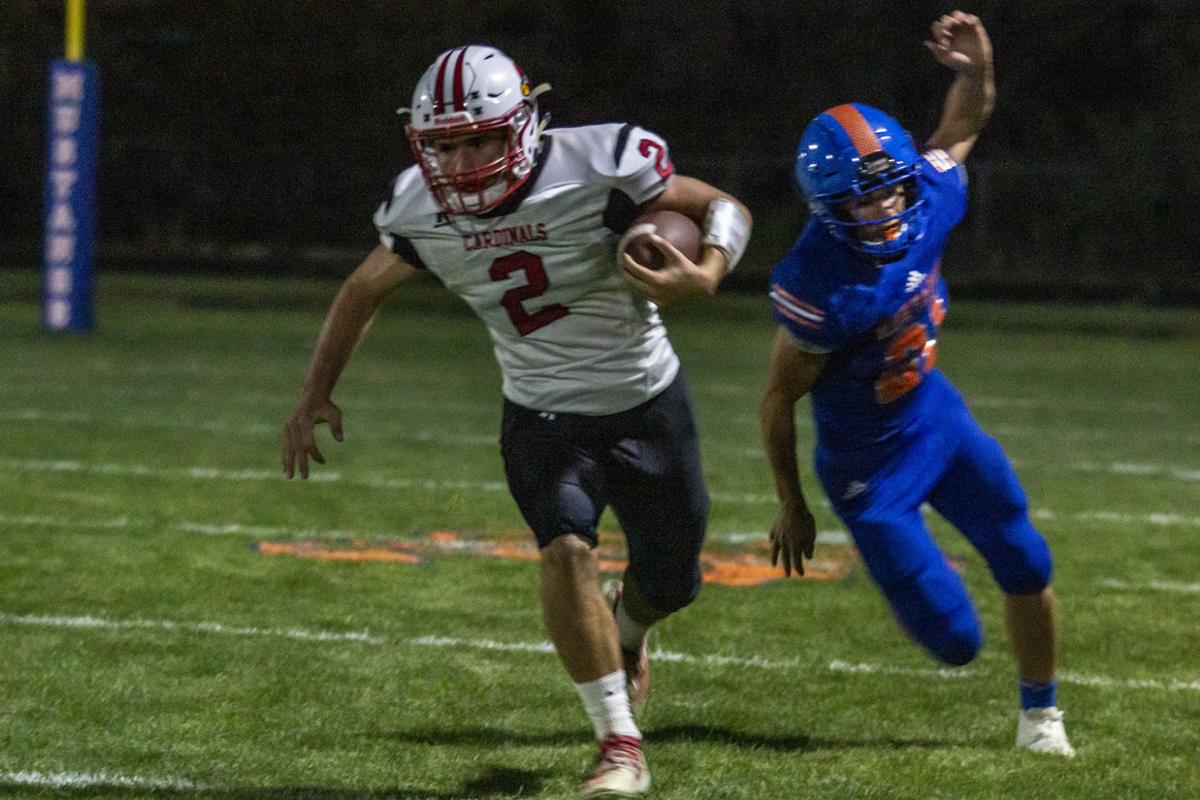 Dawson Dunbar gets ahead of Carter Anderson. Dunbar had five carries during the game for 42 rushing yards.

After trailing 21-14 early in the third quarter, the Chadron High football team scored the final three touchdowns Friday night to slip past Gordon-Rushville 36-21 in Gordon.

The game had lots of action, featuring 714 yards of total offense, nearly 500 of those yards through the air, and three touchdown pass plays of at least 60 yards.

It also was closer than expected. Gordon-Rushville was coming off a 71-0 thrashing from Ord in its season-opener, while the Cardinals had launched its season with a 26-0 win over Chase County.

But, Chadron Coach Mike Lecher said he was not surprised that the Mustangs gave his team a stiff battle.

“We knew they’d play better against us,” Lecher said. “They always do. It was a pretty typical battle between these two teams. We didn’t play our best early and they took advantage of some of our lapses on pass defense. They have some good young players who made some big plays.”

Players on both teams racked up impressive stats. Among them was Chadron sophomore Xander Provance. He scored the game’s first touchdown as well as the final three, rushed four times for 40 yards and caught four passes for 148 yards. He also ran for a conversion, giving him 26 points.

Both quarterbacks were on target and threw for lots of yards.

Chadron’s Justus Alcorn completed nine of 15 passes for 217 yards and two TDs, while Mustangs’ quarterback Carter Anderson connected on 16 of 23 tosses for 278 yards and three scores. Both are juniors.

The Cardinals scored first, going 42 yards in six plays after Gordon-Rushville opened the game with an onside kick. Provance went the final four yards after he’d also gained 15 on a pitch play.

Gordon-Rushville responded in a hurry when Anderson connected with Lynch on a 69-yard bomb that saw the 5-11, 140-pound Mustang get wide open behind the Chadron secondary.

The salty Mustangs struck again to take a 13-6 lead shortly before the first quarter ended.

This time they went 68 yards, overcame a second and 19 situation after Anderson was sacked early in the drive, and got the touchdown on fourth and 15 when Anderson’s pass to Logan Slama, a 5-foot-5, 130-pound sophomore, netted the final 34 yards.

Midway in the second quarter, the Mustangs reached the Chadron 26 before Cardinals’ linebacker Aiden Vaughn intercepted Anderson’s pass and returned it to near midfield. That was the game’s only turnover, and it was a big one.

Alcorn hooked up with Dawson Dunbar on two first down passes early in the drive. The second came on third and 15 after the Chadron quarterback had been sacked by linebacker Harley Bayne.

Once the Cardinals reached the red zone, Haag picked up a first down on fourth and five. He then scored on five-yard run with 41 second left in the half. Provance put the Red Birds ahead 14-13 by running for the conversion.

The Mustangs regained the lead 22-14 on the first possession of the second half. The touchdown came on a 60-yard pass play from Anderson to Lynch. A pass to Elijah Jackson added the two-point conversion.

The Cardinals answered on their next possession, driving 64 yards. Dunbar had a couple of good-sized gains early in the drive. Haag ripped off a 20-yard run and then picked up a first down on fourth and one. Provance went the final seven yards on the next play and Haag added a conversion run to put Chadron ahead 22-21 with 3:14 left in the third frame.

Chadron also scored on the first play of the fourth quarter on a 24-yard pass from Alcorn to Provance to cap an 80-yard drive. Dunbar got things going with a 23-yard run and Provance caught a 29-yard pass to set up his touchdown reception two plays later.

Haag again ran for the conversion.

The game’s key defensive play came on the ensuing kickoff. The Mustangs’ McCaffrey Ballard, a 5-7, 125-pound senior, returned the kick 70 yards before Dayton Richardson made the touchdown-saving tackle at the 10. Three plays later, the Cards’ Cobie Bila stopped Anderson, who was rolling out to pass, to help keep the Mustangs from scoring.

A few plays after the Cards took over on downs, Provance got behind the Mustangs’ secondary, hauled in Alcorn’s pass at near midfield and went on to complete the 84-yard play. It ties as the third longest touchdown pass in Cardinals’ history.

Now trailing by what would be the final score, the Mustangs didn’t fold. Aided by a roughing the passer call against the Cardinals, they reached the Chadron 11 before Vaughn sacked Anderson for a 13-yard loss to effectively stop the drive.

The win was the Cardinals’ 10th in a row over the Mustangs. Three of them have been by 10 or fewer points

Both teams will be home this Friday night with Mitchell playing at Gordon and Chadron hosting Valentine. Mitchell has won its first two games while Valentine had its season-opener cancelled and was defeated by O’Neill 25-13 last Friday night. The game in Chadron will kick off at 7 o’clock.

Cardinals squeeze out 16-14 win at Gering

By the narrowest of margins, the Chadron High football team squeezed out a 16-14 verdict at Gering on Friday night to avoid being upset by the…

The home course was not friendly to the Chadron High girls’ golf team last Thursday.

The Chadron High Volleyball team had eight contests within five days last week, starting things off with a triangular on Tuesday, Sept. 15 wit…

The fourth annual Grey Eagle Warrior Challenge is set for Saturday, Sept. 26 in Chadron. The event challenges contestants' abilities with a 5K…

Ryan Bickel (60) looks to block a kick from Mustang Michael Perez while Atreyo Thorson tries to bring him down and Cardinal Tallon Craig. Among the Cards providing some extra defense wereTallon Craig (9) and Sawyer Haag (12).

Dawson Dunbar gets ahead of Carter Anderson. Dunbar had five carries during the game for 42 rushing yards.