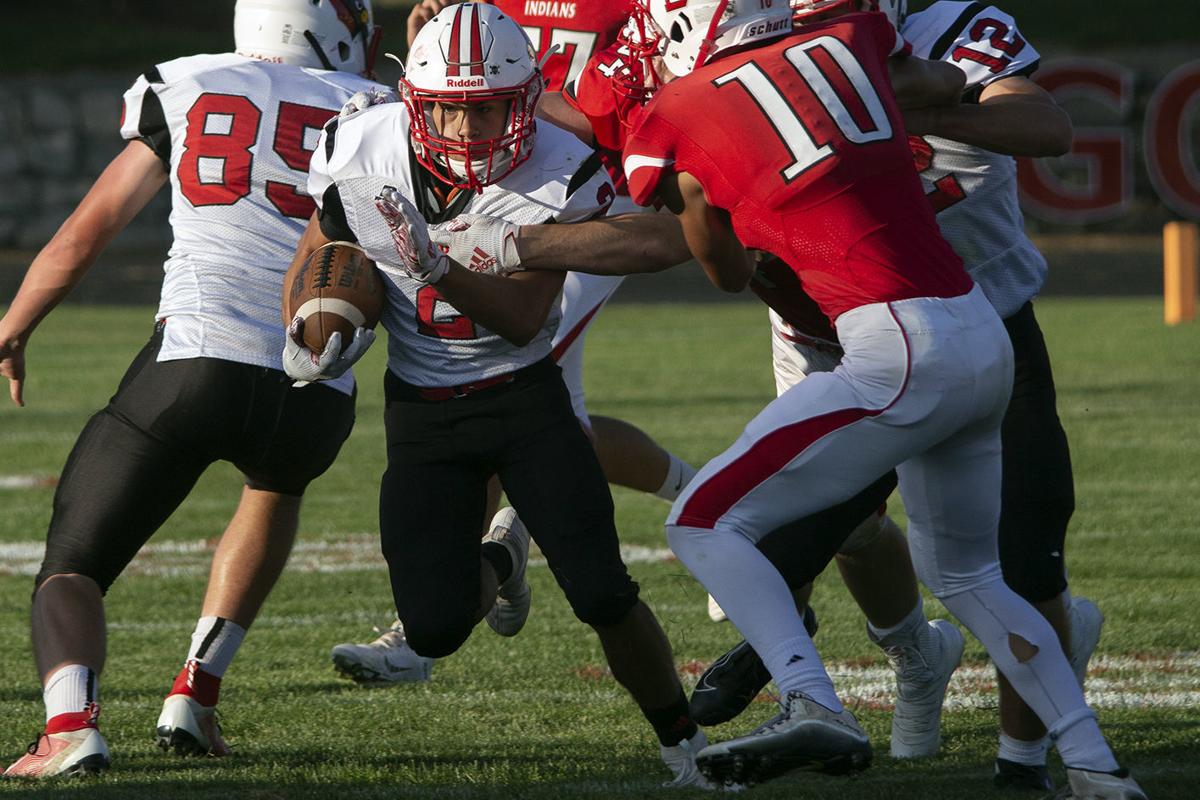 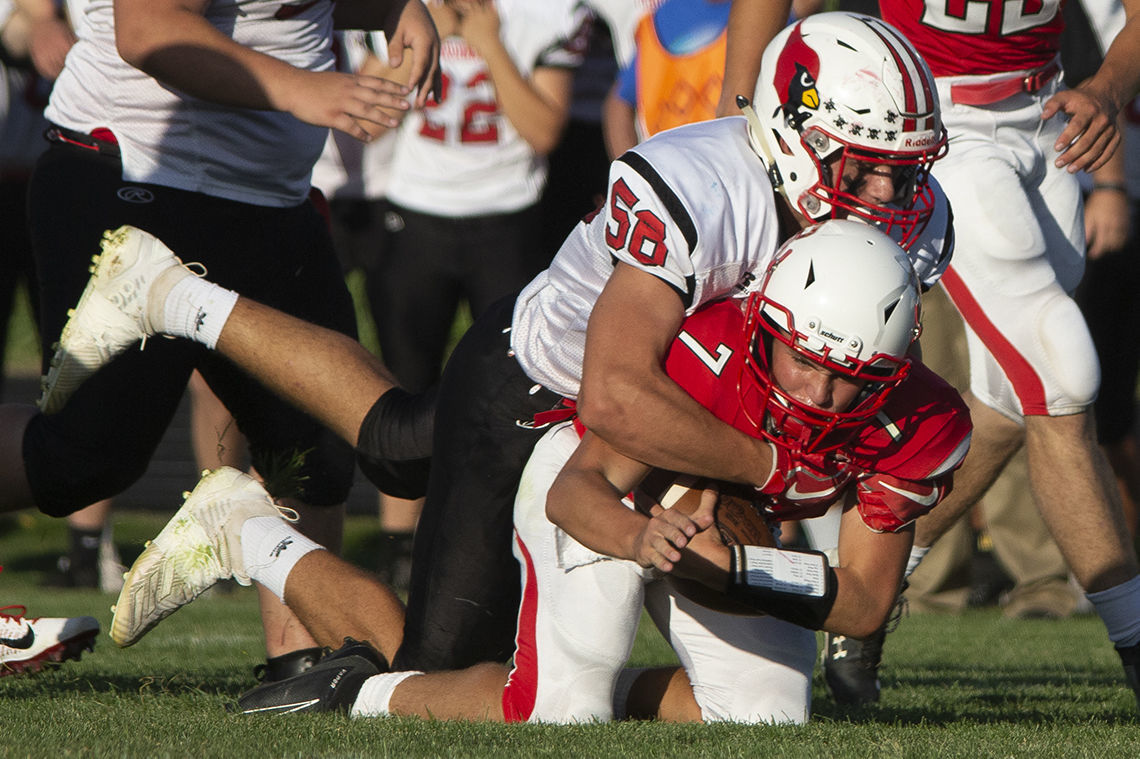 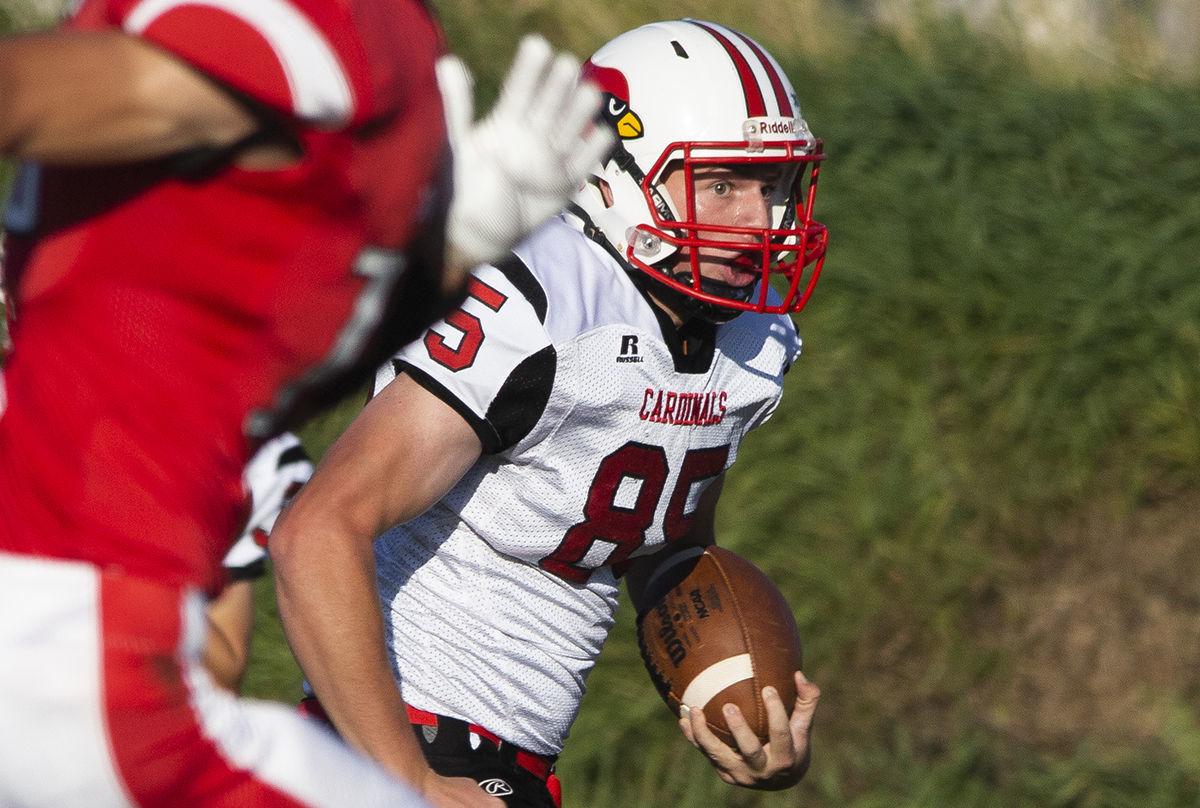 The Chadron Cardinals’ football team improved to 3-1, Friday in Broken Bow, with a 28-12 win over the Indians.

The Cardinals scored on their first three drives of the game thanks to big plays by Cooper Heusman and Dillan Sayaloune.

Sayaloune rushed for 264 yards on 27 carries and scored three touchdowns for the Cardinals. Heusman used his three rushes to run for 91 yards, second only to Sayaloune. He also led the team in receiving with 68 yards on five catches.

After allowing three first downs on Broken Bow’s opening drive, the Chadron defense tightened, forcing the team to punt on its first possession. On their second possession, the Indians had great field position after returning a kickoff to the Chadron 48, but talented Indians quarterback Blake Denson was intercepted by Chadron’s Coy Bila, setting up the Cardinals third scoring drive.

After one of Cardinal Aiden Vaughn’s two sacks helped end their third possession, Broken Bow’s Denson showed his skill by hitting teammate Skeeter Campbell for a 43-yard TD with less than five minutes left in the first half.

Neither offense was able to find much ground in the early going of the second half, but a short punt from the Indians set the Cardinals up at Broken Bow’s 42-yard line with under three minutes in the third quarter. From there, Sayaloune carried the ball four times, eventually punching it in from the 3-yard line to make it 28-6.

With eight minutes remaining in the game, Denson went to the air again, hitting senior Mykael Stoddard for a 55-yard TD to make it 28-12.

Chadron quarterback Trevor Berry completed seven of 17 attempts for 67 yards in the game.

Chadron more than doubled Broken Bow in total yards, accumulating 462 of their own while holding the Indians to 222. Broken Bow rushed 22 times for just 31 yards and had nine passes for 191.

The Cardinals’ defense was led by Vaughn who forced a fumble and had seven tackles, including two sacks. Teammates Isaiah Beye and Cooper Wild each had six tackles. Heusman and Sawyer Haag each had four. Beye was credited for 1.5 sacks and Heusman had .5. Tallon Craig had the team’s second interception.

Friday, the Cardinals host Sidney in their annual homecoming game. The Red Raiders are 2-2 this season with losses in both of their last two games. Friday they lost 28-27 to Cozad in overtime.

Two of Chadron’s all-time great are moving on. Their outstanding athletic careers ended several months ago. One of them graduated from college…

The outcome of Ridgeview Country Club’s Two-Man Tournament definitely went down to the wire last weekend. A playoff was needed to determine th…

Chadron’s First National Bank-Omaha Juniors baseball team put up a strong fight during the Nebraska State Tournament, before having its season…

The Chadron Juniors baseball team made it look easy last week while wrapping up the Class B, District 7 championship on its home field.

Chadron’s First National Bank-Omaha Seniors may have lost a nail-biter at Sidney on Tuesday night last week, but they won another over Allianc…

Ridgeview Country Club hosted four tournaments in June with plenty of competition in each of them.