Just a freshman in 1996, Mike Fackrell scored on a 49-yard touchdown run and rushed for 117 yards as Chadron State defeated Nebraska-Kearney 14-10.  It was the first of six straight wins over the Lopers. 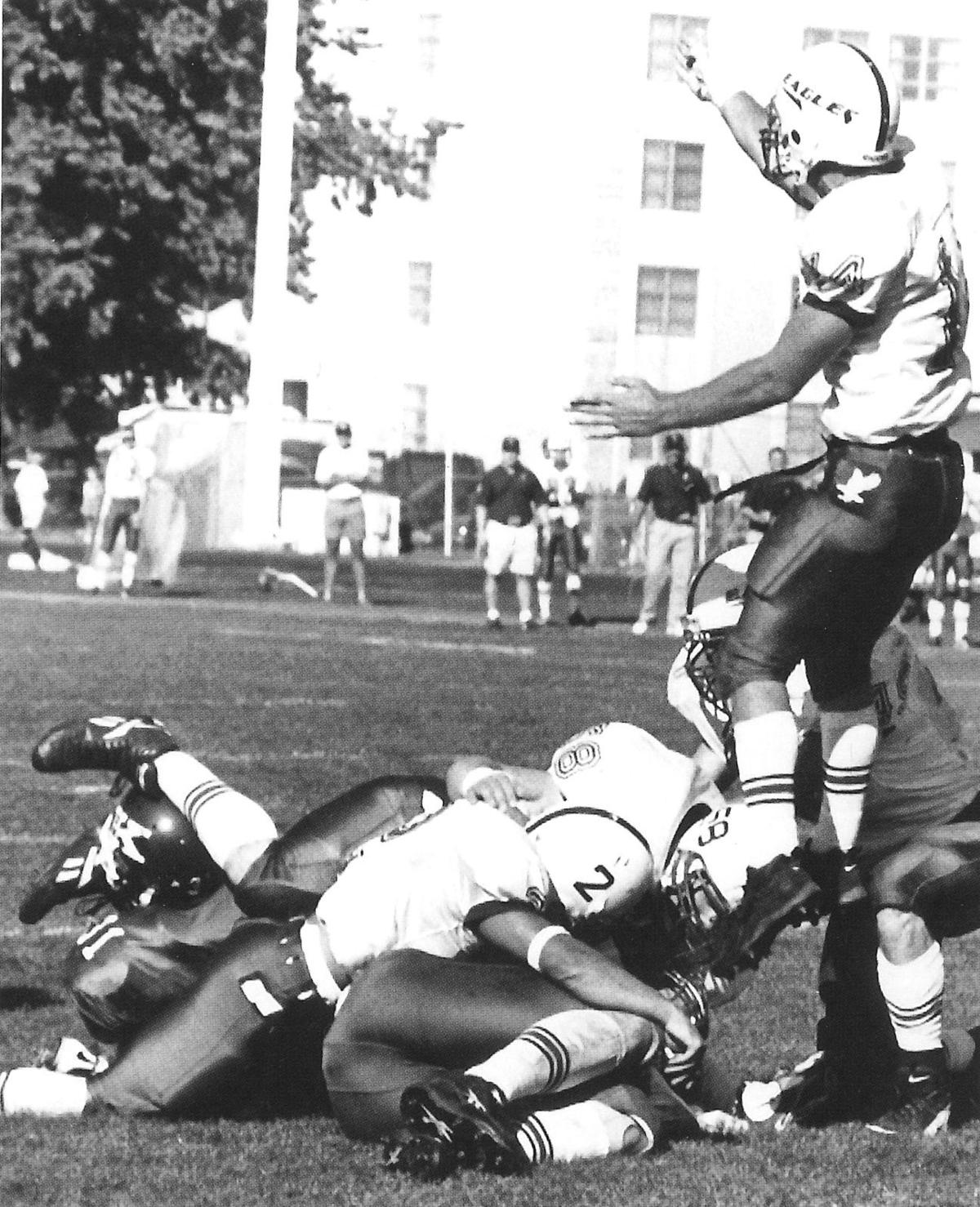 This was a big play in the 1997 CSC-UNK game. The Lopers fumbled in overtime and the Eagles’ Kevin Homer recovered. Safety Ryan Turman let the crowd know who recovered. CSC won 40-34.

Although it’s been interrupted numerous times, the Chadron State/Nebraska-Kearney football rivalry always creates excitement. It’s expected to happen again this Saturday, when the Eagles visit the Lopers in another gridiron clash in Kearney. It will be their first game since 2011.

They weren’t scheduled to meet this season, but the coronavirus has brought on many unusual developments, most of them bad. This event should be a great thing, particularly for Chadron State fans if the Eagles can pull off a victory.

For many years the rivalry brought out huge crowds and caught statewide media attention. That’s expected to happen again, because sports fans are looking for something to perk up their lives.

Some 14 years ago when both teams were members of the Rocky Mountain Athletic Conference and met annually, long-time CSC Defensive Coordinator Todd Auer was quoted as saying, “You can throw all the stats and the records out the window when these teams meet. You know it’s going to be a brawl.”

It would be 48 years before the Eagles tasted victory in the series again. The teams met 32 times during that span and Kearney won 31 of those games. The exception was in 1978, when CSC’s Boot Hill Bowl-bound team led by Brad Fults and Bill Ryan tied the Lopers 10-10.

But in 1996 after Kearney joined the RMAC, the series was back on full-time. Chadron State may have still been the underdog when that happened, but the Eagles under Coach Brad Smith had gone 9-2 and 8-2 the previous two years and were playing excellent football.

The Eagles prevailed 14-10 at Elliott Field. They scored on a 49-yard run by freshman tailback Mike Fackrell, after he took a direct snap from center on CSC’s third play from scrimmage, and then connected on a 74-yard pass from Trevor Moon to Troy Theobald on the second play of the second half. It helped the Eagles win their first RMAC championship.

That would be the first of six straight victories for the Eagles. The fans definitely got their money’s worth in each of them. Only one of them was decided by more than six points.

In 1997 at Kearney, Chadron State played just its second overtime game. The Eagles dominated offensively, picking up 29 first downs compared to 16 for UNK and out-yarded the Lopers 473 to 299. The lead changed hands four times and there were a variety of wild scoring plays before the Eagles tied the count at 34-34 with 17 seconds left on a 20-yard field goal by Dan O'Donnell.

The Antelopes had first possession in overtime and drove from the 25 to the one before fumbling a pitchout that was recovered by the Eagles' Kevin Homer. The CSC All-American also blocked an extra point attempt, intercepted a pass and took part in 16 tackles that game.

When Chadron State got the ball in overtime, quarterback Trevor Moon hit Jamie Dick on a 13-yard pass over the middle before Anthony Simmons sprinted down the sidelines to paydirt on the next play to give the Eagles a 40-34 victory.

In 1998, the Eagles posted a touchdown and a field goal in the fourth quarter to edge the Antelopes 27-23. CSC held a 17-7 halftime lead, but UNK scored two TDs in the third period to pull ahead 21-17.

The Eagles responded by marching 80 yards in seven plays and scoring on a nine-yard pass from Moon to Ceddrick Cummings with 12:49 to play. CSC added a 22-yard field goal by O'Donnell with 3:50 remaining, then yielded a safety with 15 seconds left rather than punt out of the end zone.

The 1999 game in Kearney was another stemwinder that CSC won 24-18. Kearney rolled up 512 yards and Chadron 428. Coleman completed 34 of 65 passes with Jebb Hatch catching 15 for 184 yards. Simmons helped offset the Kearney aerial attack by rushing 19 times for 142 yards.

No doubt the game’s big play was an 82-yard fumble return by CSC linebacker Rob Bennie following a punt. The Eagles' All-American defensive end Casey Beran made a huge contribution by blocking both a field goal and an extra point attempt.

Back in Chadron in 2000, it appeared that Kearney would win before quarterback Matt Strand hit slotback Rian Weber with a 22-yard fourth down pass over the middle with 1:04 remaining and Aaron Turner kicked the extra point to give the Eagles a spine-tingling 23-22 victory.

CSC’s 26-14 verdict in Kearney in 2001 had by far the largest point spread during the Eagles’ six-game victory skein. CSC cornerback Marvin Jackson earned Football Gazette’s national Defensive Player of the Week honors after returning interceptions 92 and 44 yards to account for two of the Eagles’ touchdowns. This time, Kearney outyarded the Eagles 363 to 298 from the line of scrimmage, but CSC finished with 183 yards on punt and interception returns.

Kearney broke the Eagles’ winning streak in 2002 by playing an almost error-free contest. The score was 12-0. Kearney had no turnovers and only five penalties. It was the first time the Eagles had been shut out in 107 games. CSC managed just 16 yards rushing.

In 2003, Chadron State squeezed out a 28-22 win in Kearney. The Antelopes rolled up 547 total net yards compared to CSC’s 331. However, the Eagles scored touchdowns on all four of their “red zone” opportunities while UNK was forced to try five field goals and missed two of them. Austin Forster scored three times for CSC and cornerback Mitch Barry broke up two passes in the end zone late in the game.

All-time great Danny Woodhead sparked the 31-12 victory in 2006. He romped 88 yards for a touchdown in the first period, went 63 yards to paydirt in the third quarter and added a 17-yard scoring jaunt in the fourth. He finished the game with 32 carries for 274 yards. Defensive end Jared Koester helped out by intercepting a screen pass and taking it 47 yards for a TD.

After Woodhead had rushed for a national record 2,756 yards and won his first Harlon Hill Trophy in 2006, the 2007 game was moved to Thursday night and selected for a live video streaming so fans across the nation could watch it on their computers.

. Unfortunately, Woodhead sustained a sprained arch on his first carry and could not return.

Chadron native Joe McLain came to the Eagles’ rescue. He completed 24 of 35 passes for 257 yards and ran for 68 yards and three touchdowns as CSC won 28-16.

Woodhead had graduated, but McLain was at the helm again the next year when the Eagles were 17-14 winners in Chadron. His 27-yard pass to another Chadron product, John Ritzen, in the fourth quarter provided the winning points.

However, CSC linemen shared the honors. Shane Dennehy blocked a 57-yard field goal attempt by the Lopers in the third quarter and Ben Puffer got his hands on a potential game-tying field goal with less than a minute remaining.

Three 8-man football teams from the Panhandle had winning records and advanced to the playoffs this fall, but unfortunately none of them got p…

Bill Rice, an outstanding athlete at Chadron High School and the University of Montana who became a lieutenant colonel in the United States Ma…

Chadron State College’s 2020 football season was a short one. Just four games were played because of the COVID-19 pandemic. However, numerous …

Clint Sasse, a former Chadron State football player and an assistant coach the past two years, was promoted last week to become the Eagles’ de…

The Chadron High School basketball teams will open their seasons Thursday, Friday and Saturday, Dec. 3-5 by playing in the Western Conference …

After it appeared the Chadron State College men’s basketball team was making good progress, the Eagles suffered a serious setback when six mem…

The Chadron State College men’s basketball team is making progress as it prepares to open the season Sunday and Monday, Nov. 22 and 23 in the …

Just a freshman in 1996, Mike Fackrell scored on a 49-yard touchdown run and rushed for 117 yards as Chadron State defeated Nebraska-Kearney 14-10.  It was the first of six straight wins over the Lopers.

This was a big play in the 1997 CSC-UNK game. The Lopers fumbled in overtime and the Eagles’ Kevin Homer recovered. Safety Ryan Turman let the crowd know who recovered. CSC won 40-34.