Tommy Watson, who just signed to play football at CSC next fall, brought the Sioux County basketball squad to 11 wins last week and a near guarantee of the number one seed in their sub-district on Feb. 25 and Feb. 27. 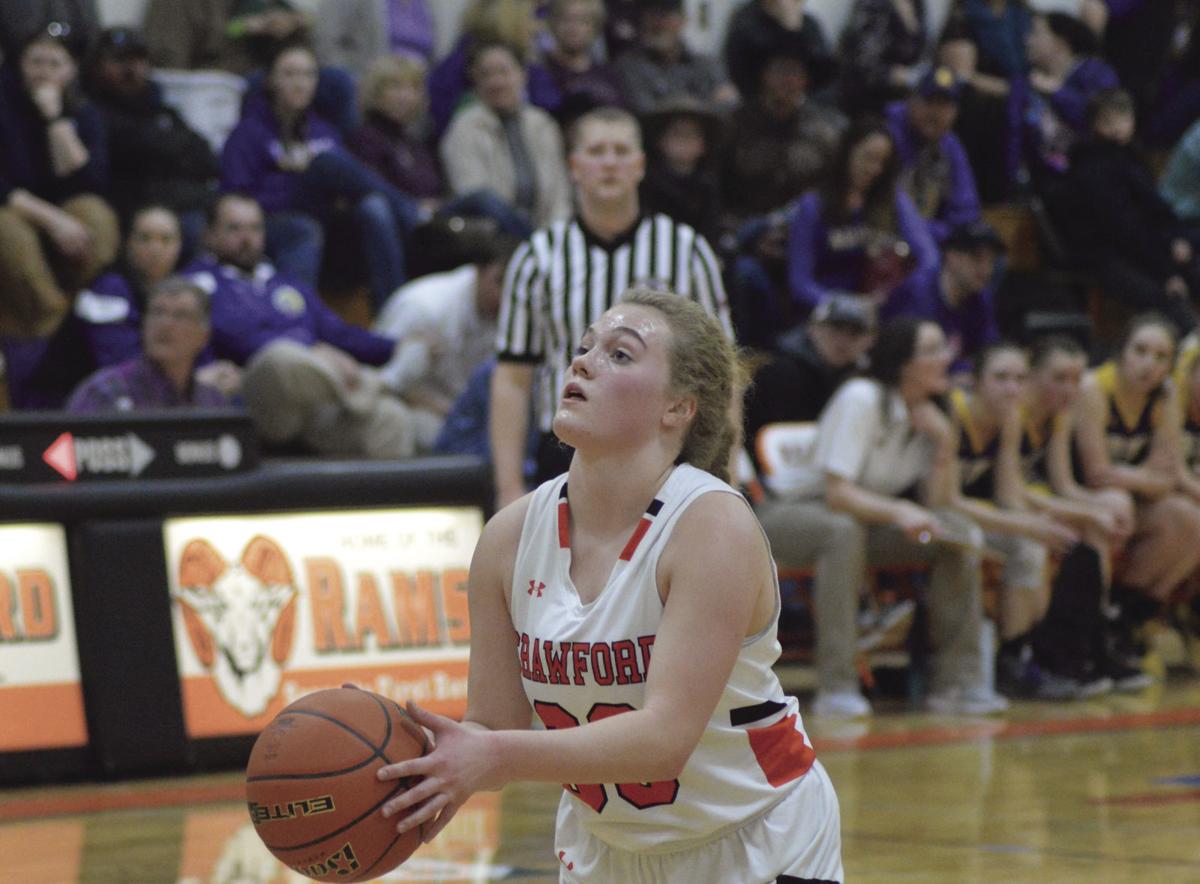 Skylar Summers (shown here shooting technical free throws) has given the Crawford girls a boost of defensive and offensive production in the absence of freshman, Kylah Vogel. The Rams hope to have a full roster next Feb. 18 at sub-districts when they take on the nominal two seed, Cody-Kilgore.

The Crawford and Sioux County girls and boys basketball teams moved one step closer to sub-districts on Feb. 11 when they faced each other in Crawford. The games were somewhat of a reflection of each other except for the outcome. The Sioux County boys’ team controlled the tempo through their senior point guard, Tommy Watson, and rode his 11 points to a 39-21 victory. Meanwhile the Crawford girls dictated ball control through their sophomore point guard, Natalie Barry, who scored a season high 15 points in the Lady Rams 44-31 win over the Lady Warriors.

Crawford’s full court pressure and offensive put-backs gave Sioux County fits most of the night. Around the mid-way point of the first quarter in a 5-3 Sioux County games, Crawford instituted a full court press which resulted in three Warrior turnovers in a row. Crawford scored on all three of their takeaways with a Natalie Barry three, a Carly Lemmon runner, and a Skylar Summers layup. This game them a 12-5 lead, and the Lady Warriors would never get the game to within one possession the rest of the night.

Crawford got superb minutes from sophomore Skylar Summers on the night. Skylar who is valued more for her pressure defense at over 40 steals on the year, gave the Lady Rams seven points which is well above her season average of three. She was also constantly in the thick of action in the Lady Rams press getting deflections and applying ball pressure for a ten second call in the fourth quarter during a critical juncture. The Rams know at this point in the year that their main scorers are going to be Blake Dodd (11ppg), Jasmine Dyer (9ppg), Carly Lemmon (8ppg), and Natalie Barry (7ppg). If they can continue to get hustle minutes from Skylar Summers and junior Taylyn Clark they could disrupt the game against Cody-Kilgore at sub-district.

Much like the second quarter scoring flurry the Lady Rams got from their press, the same thing happened in the third. In a 19-15 game after a 6-0 run from the Lady Warriors, Crawford got a turnover which turned into a Natalie Barry three, and moments later got another half court turnover which resulted in a Skylar Summers run out. It was right after this the Lady Rams turned the Warriors over on a ten second violation, and the momentum along with a 13 point lead turned out to be too much for the Lady Warrior to overcome.

In the fourth quarter, the Lady Warriors did manage to get the game whittled down to eight behind four free throws from Karlee Juhnke and two threes from Kodie Rempp, but from this point on Crawford put the ball in the hands of Barry and Dodd and iced the game with lengthy possessions and free throws.

It was the last home game for the Lady Rams only senior in Blake Dodd. For her varsity career which spanned four years she is going to unofficially have over 550 points, more than 350 rebounds, well north of 100 steals, over 200 free throw attempts, and have been a part of at least 34 wins for the Crawford Lady Rams.

Sioux County senior point guard, Tommy Watson, did what seniors do when their ball team is short-handed (Tristan Hunter at 15ppg and Tucker Monroe at 6ppg were out due to illness). He shortened the game for his team by keeping the ball under control and in his hands nearly every possession. He scored the first four points of the game by using ball screens effectively, and then assisted Michael Comstock on a layup for an early six point lead.

Under the direction of Watson late in the second quarter, the Warriors orchestrated a thirty plus second possession wheeling off of high screens and were able to get 6’5’’ junior Sam Skavdahl a good mid-range look, which he hit. Putting Sioux County up 18-5 the game never seemed in doubt from that point on.

Watson recently signed to the position of “Athlete” for the Chadron State College football team next fall. In his prep basketball career he has scored over 650 points for the Warriors and his head coach, Lane Grote, commented on his leadership abilities: “Tommy has been a huge part of the basketball program. He is a hard worker and is a great leader on and off the court. His competitive attitude helps him excel in all things he does.”

In the second half the Warriors got nine points from another one of their seniors in Michael Comstock. Comstock is the third scoring option for the Warriors, and takes a ton of pressure off of Watson and Hunter in the scoring column. Sioux County is 5-2 whenever Comstock reaches double figures. Comstock, who plays a nice defensive game as well, will have around 400 points in his career at the end of the year. Tristan Hunter, who was ill for the game, will have around 800 points for a career. Sioux County, due to numbers, did not have a team for this trio of seniors their sophomore years, and may have had two players in the 1,000 point club if not for it.

Lane Grote is now looking to sub-district: “Hopefully when subs start all of our kids will be healthy. We have a much needed break to get healthy and focus on our sub-district teams.”

It was the Lady Rams first win over Sioux County this year after losing the first two contests, and it was the third loss for the Crawford boys’ against the Warriors on the year. On Feb. 18 and Feb. 20 at the D2-11 sub-district in the Chicoine Center, the Crawford and Sioux County girls will likely have to win their first round games to face one another again. Crawford will likely have to face the nominal two seed, Cody-Kilgore.

The Cowgirls are the best team in the sub-district even as the number two seed, having beaten both Sioux County and Crawford by double digits. The Cowgirls have also played D-2 #5 Mullen to a 14 point game, the D-2 #10 Stuart girls to within ten, and the C-2 #10 South Loup girls to a 12 point game. Either the Rams or the Warriors will have to find a way to slow down 20ppg scorer, Elle Ravenscroft. The Crawford boys look slated to take on Hay Springs in the D2-12 sub-district the week after, while Sioux County as the one seed seems likely to play Cody-Kilgore.

Q: What is one memory about the season that sticks out in your mind?

Chadron State College golfers got the spring season off to a nice start, when they competed in two meets in Las Vegas, Nevada. The Eagles fini…

Tommy Watson, who just signed to play football at CSC next fall, brought the Sioux County basketball squad to 11 wins last week and a near guarantee of the number one seed in their sub-district on Feb. 25 and Feb. 27.

Skylar Summers (shown here shooting technical free throws) has given the Crawford girls a boost of defensive and offensive production in the absence of freshman, Kylah Vogel. The Rams hope to have a full roster next Feb. 18 at sub-districts when they take on the nominal two seed, Cody-Kilgore.