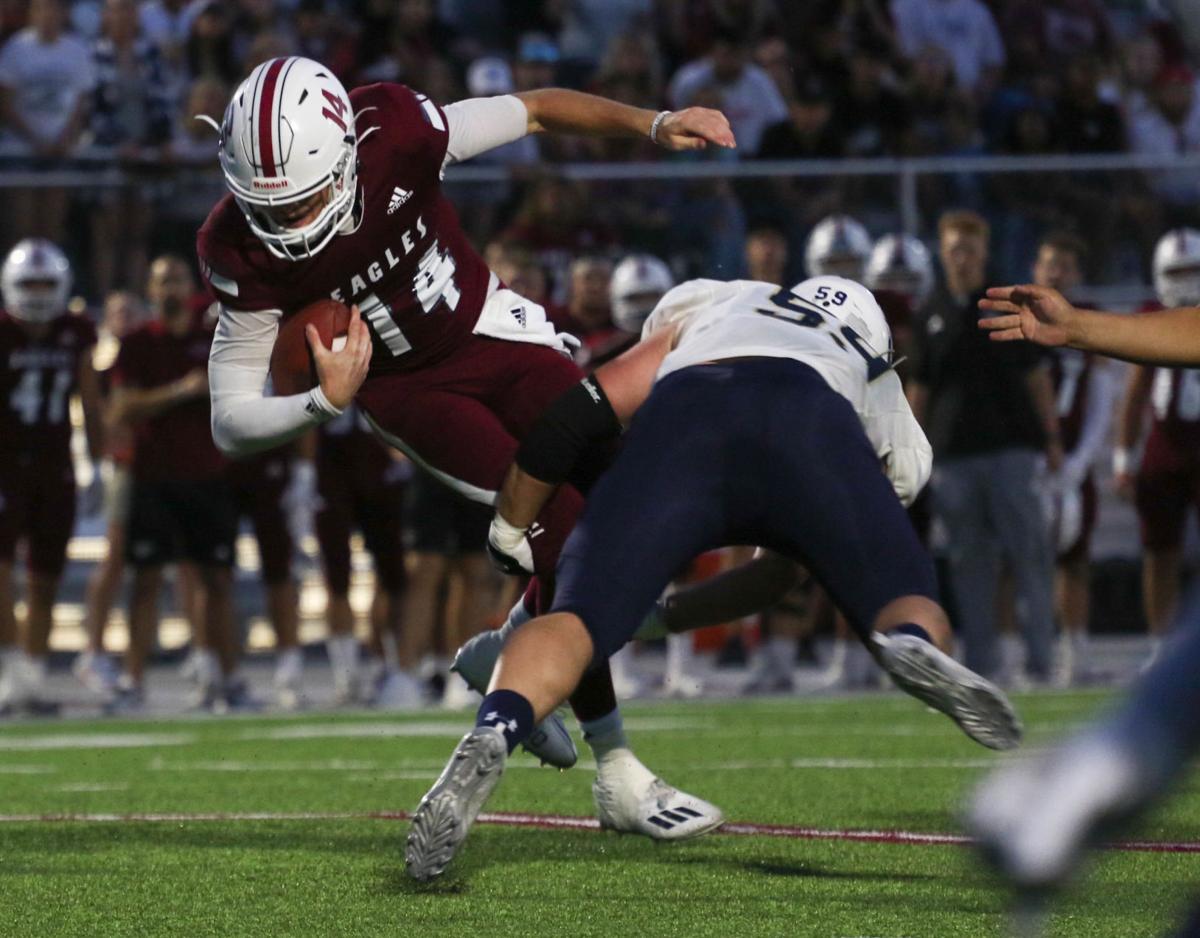 Chadron State College quarterback Dalton Holst attempts to avoid linebacker Justin Broekemeier in the first half of the game Saturday. 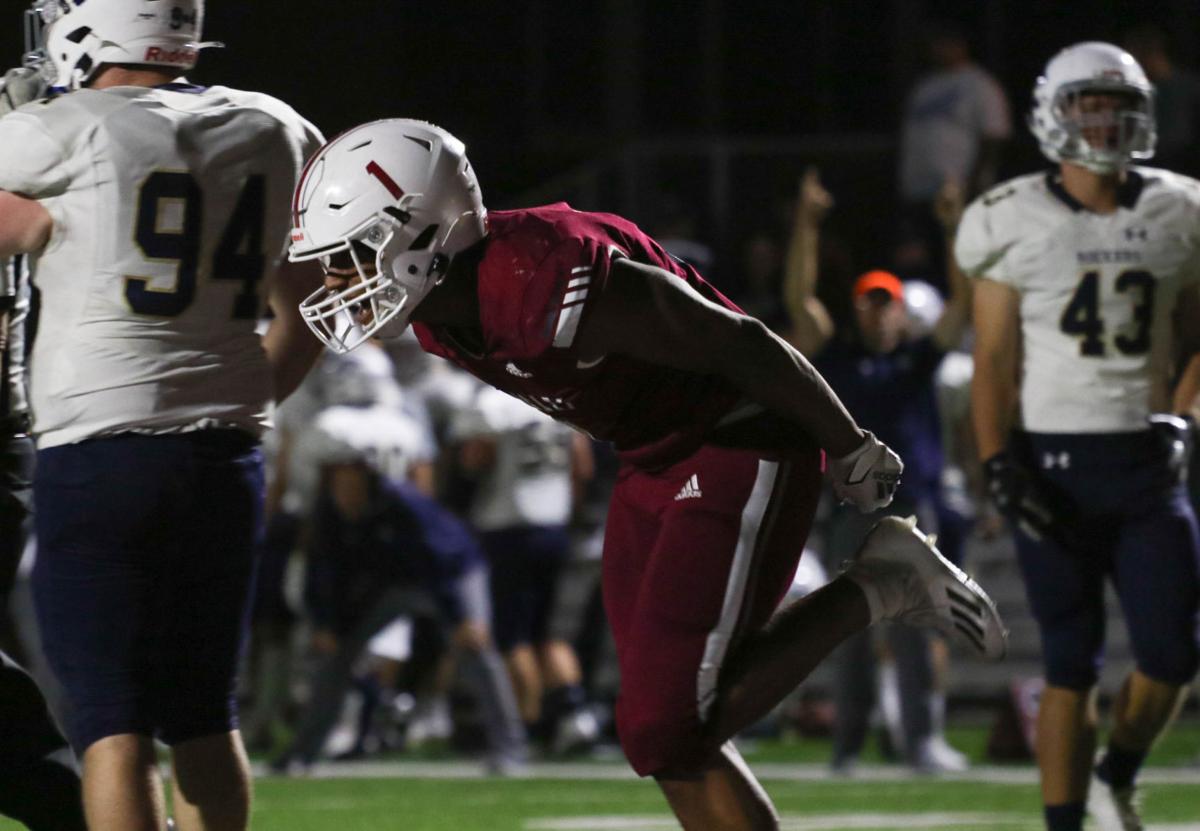 Chadron State College running back Elijah Miles celebrates a touchdown during the second half of the game against South Dakota Mines Saturday. 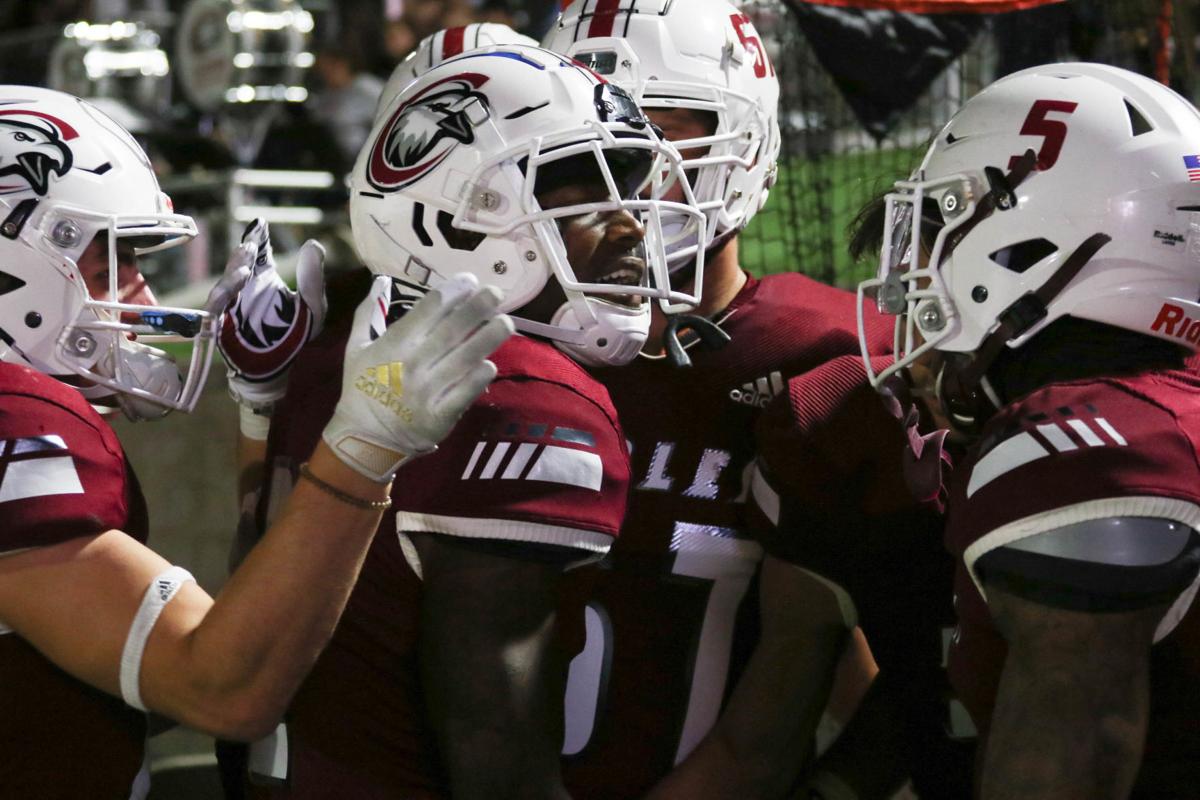 Chadron State College defensive back Bobby Peele celebrates with his teammates after intercepting the ball on the 5-yard line in the game against South Dakota Mines Saturday in Chadron.

Chadron State was steady and methodical with the football Saturday night.

With three of their five scoring drives involving double-digit plays and owning possession for more than 35 minutes, nearly 11 minutes longer than South Dakota Mines, the Eagles moved the ball with relative ease through the air and on the ground en route to a 31-20 victory over the Hardrockers in the annual battle for the Eagle Rock Trophy at Elliott Field.

Chadron State quarterback Dalton Holst completed 22 of 29 passes for 327 yards, a pair of touchdowns and no interceptions. The Eagles, now 1-2, converted 11 of 15 third downs in posting their 15th straight win over Mines.

Chad Mikelson made five catches for 149 yards, including a 64-yard touchdown, and Rapid City native Cole Thurness had seven receptions for 51 yards. Workhorse Elijah Myles ran for 79 yards on 21 carries, and Jeremiah Makahununiu led the Eagles with eight tackles.

Jayden Johannsen went 18 of 31 for Mines, 2-1, for 166 yards, one touchdown and s pick. He also was the Hardrockers’ leading rusher with 72 yards on 11 carries and a touchdown. Isaiah Eastman and Ahmad Lewis each caught four passes. But Lewis, a first-team all-RMAC choice in 2019, gained just 23 yards in 26 carries against the Eagles’ defense. Sophomore safety Casey Knutsen led the Hardrockers’ defense with a dozen tackles.

“They wore us out defensively,” Mines head coach Charlie Flohr said of Chadron’s State’s long drives. “We just struggled getting off the field, third quarter especially. We were in positions to make big plays and we just didn’t make them tonight.”

Kyante Christian sacked Holst on the opening drive of the game, forcing a punt, but the Hardrockers were unable to take advantage and punted on their first possession. The Eagles executed a 13-play, 80-yard drive on their second possession, which included a pair of third-down conversions, and scored when Jeydon Cox went the final two yards.

The hosts then strung together a 12-play drive that stalled at the 19-yard line, leading to a 35-yard field goal by Gunnar Jones to make it 10-0 with 9:47 to play in the second quarter.

The Hardrockers, aided by a kickoff out of bounds, answered with an 11-play drive that ended when Johannsen faked a sweep, kept the ball himself and hustled 6 yards for the score inside five minutes. Mines faced just one third on the drive, a third-and-nine attempt from the 12 that was converted via an illegal blindside block penalty.

After a pair of long scoring drives, Chadron State got the quick-play attack going when Mikelson beat a defender deep and hauled in a 64-yard touchdown pass from Holst to give their squad a 17-7 lead with 3:14 left before halftime.

The Hardrockers cut their deficit to one possession by moving the ball 65 yards in 2:56 and scoring with 18 seconds left when Lewis punched it in from 9 yards out. The PAT missed, however, keeping it a 17-13 game at intermission.

“(Lewis) is one of the best players in Division II,” Long said. “He’s been around forever and he’s a terrific football player, and our guys held him to 1.9 yards per carry, so I’m really proud of that.”

A Bobby Peele interception on Johannsen’s first-down throw from near midfield preceded the Eagles’ 95-yard scoring drive that lasted more than nine minutes in the third quarter. Holst went 8 of 9 for 92 yards, converting four third downs and finishing off a drive with an 8-yard touchdown pass to Myles to give the Eagles a 24-13 advantage.

Holst also connected with Montel Gladney on a 32-yard completion early in the fourth quarter before freshman Dorian Collier, on just his second carry of his career, broke a tackle en route to a 33-yard touchdown to make it 31-13 with 12:31 remaining.

“He’s been a part of our team for a long time,” Long said of Holst. “He’s going to have almost every quarterback record when he’s done, and our guys trust him. I’m really proud of his effort today because he got to show what he’s about and how good he is.”

Mines managed to score again but took nearly six minutes in doing so, capping a 15-play drive with a fourth-and-10 throw to Jeremiah Bridges for a 23-yard TD to make it an 11-point contest with 6:32 to play.

Bridges had seven catches for 75 yards.

The Eagles milked the clock on their ensuing possessions.

“I’m happy with those drives. Our kids did a good job of responding when we needed to," Flohr said.

Chadron State burned more clock and punted to with 2:02 left. The Hardrockers fell short on a fourth-down attempt and the Eagles ran out the clock to secure the victory.

Seven former Chadron State athletes will be inducted into the college’s Athletic Hall of Fame on Saturday, October 23 following the Eagles’ fo…

The Chadron State College football team had more first downs, more yards and more time of possession, but was outscored 24-17 by host Colorado…

Chadron State College quarterback Dalton Holst attempts to avoid linebacker Justin Broekemeier in the first half of the game Saturday.

Chadron State College running back Elijah Miles celebrates a touchdown during the second half of the game against South Dakota Mines Saturday.

Chadron State College defensive back Bobby Peele celebrates with his teammates after intercepting the ball on the 5-yard line in the game against South Dakota Mines Saturday in Chadron.