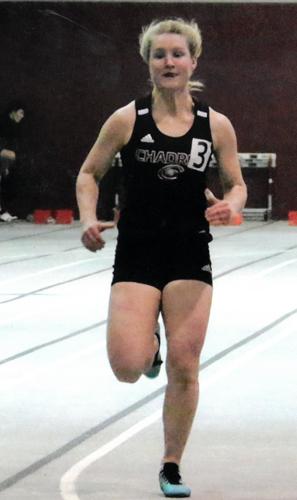 After overcoming a sinus problem that required surgery and forced her to miss the 2021 season, Carlie Collier of Dunning, Neb., had an excellent track season this spring. Her time of 12.05 seconds in the 100 meters is fifth on CSC’s all-time list and she ranks second in the 200 meters indoors in 25.21 seconds and fourth outdoors in 24.78. 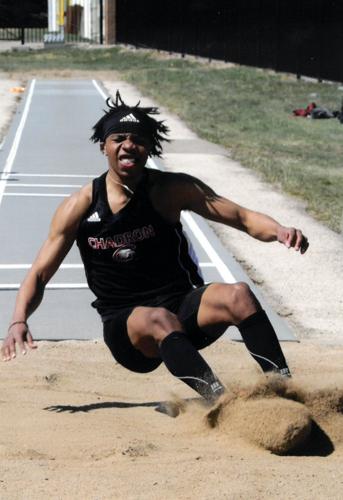 The Eagles’ Derrick Nwagwu nearly always placed high in the triple jump again this past season. He has CSC’s second best all-time mark in indoors of 49-4 ¼ and third best outdoors of 49-6 ½. 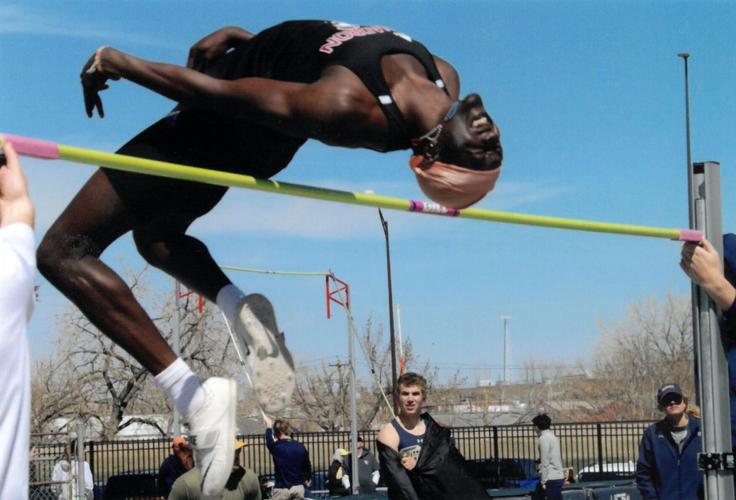 Joe Dumsa had a career-best high jump of 6-9 ¾ indoors this past season for the Eagles and cleared at least 6-6 three other times.

Led by some outstanding athletes with lots of eligibility remaining, the Chadron State College track and field team had many bright spots during the 2022 season.

With sprinters, throwers and jumpers leading the way, the Eagles were a force at every meet and appear to have a bright future, particularly if several of the standouts who were sidelined or slowed by injuries recover.

Because of injuries, the Eagles were never at full strength this in 2022, but still had an array of impressive accomplishments.

“We had a lot of athletes do really well,” Coach Riley Northrup said “Most of them are still young and will only get better if they stay healthy, or in several cases, get healthy. Our team has a great work ethic and we have a lot to look forward to if we can get everyone back at full strength.”

Northrup is pleased that the Eagles had 11 NCAA National Indoor and 8 National Outdoor Meet qualifying marks, and also points out that the CSC men and women combined to post 52 all-time top 10 marks during the two seasons.

One of the highlights was at the Rocky Mountain Athletic Conference Outdoor Championships, where the CSC men scored 111 points and placed third among the dozen teams in the final standings. Following the meet, Northrup admitted that he had not anticipated they would rack up that many points. The Eagles outscored Adams State, Western Colorado and Colorado Mesa, all by at least 32 points, proving that they were a high-quality team.

Individually, two weight/hammer throwers stole much of the spotlight. Daniel Reynolds, a redshirt freshman, served notice that he was “ready to rumble” when he hurled the 35-pound weight 60 feet, 4 inches, fourth longest in CSC annals, at the opening meet of the season. He eventually broke Cory Martens’s CSC record and then crushed the RMAC record while winning the event at the conference meet.

Once the action moved outdoors and the hammer throw was available, sophomore Shane Collins joined the fun. Both won first while competing at different meets to open the season. Three weeks later, Reynolds broke the second of Martens’ school records when he became the first CSC athlete to throw the hammer more than 200 feet.

The RMAC Meet was next and Collins broke that record, which had stood since 2005, with a heave of 202 feet even. Reynolds was the runner-up at 201-10, just two inches shy of the new record. Before the season ended, both had done even better. Reynolds held on to the school record with a fling of 203-8, and Collins was just six inches behind with his career-best of 203-2.

The next two years should be interesting as these gladiators continue their friendly rivalry while striving to become national placewinners.

While no other Eagles broke a conference record or won a gold medal at the RMAC Meets, they had many other noteworthy performances.

Highlights at the RMAC Indoor Meet saw Osvaldo Cano place second in the 400 in 49.92 seconds, Derrick Nwagwu win the bronze medal in the triple jump with a season-best mark of 49-4 ¾ and true freshman Hector Ortega go 6-7 in the high jump.

The Eagles were even more potent outdoors. During the RMAC Championships, Nwagwu in the triple jump, Creighton Trembly in the high hurdles and Quest Savery in the javelin were silver medalists. Reynolds was third in the shot put.

On the track, freshman Quincy Efeturi placed in both the 100 and 200 sprints in the men’s competition, as did Carlie Collier in the women’s races. Efeturi, who joined the Eagles from Nigeria, also outran about 20 entries to win both dashes at the Loper Invitational in Kearney in mid-April.

Also on the track at the RMAC Outdoor Meet, both Cano and Greg Logsdon placed in the 400, Logan Moravec ran the 800 in 1:54.81, the second-fastest time in that event in CSC history, and the CSC men placed third in both relays, just as they had done in the 4x400 at the indoor meet.

In the field, Brock Voth hit his second-best mark of 48-4 ¾ in the triple jump at the conference meet, and after Collins had set the hammer throw record, he also placed in both the shot put and the discus. In addition, both Dumsa and Alec Penfield high jumped 6-6 and veteran Harley Rhoades found the decathlon to his liking and placed fifth in that grueling event.

Aside from Collier and Cerenil, the Lady Eagles weren’t as strong in as many events as the men, but Northrup believes several of his 2022 recruits have bright futures. They include sprinter Caydince Groth, hurdler Danea Rader, middle distance runners Hannah Wilkie and Alissa Wieman and Hunter Wiebehaus, who cleared 5-5 ½ and placed fourth in the high jump at the RMAC Outdoor Meet.

The coach also was pleased that one of the veterans, Courtney Smith, was fourth at the RMAC Meet in the hammer throw at 166-5, some 22 feet farther than her 2021 best. He’s confident that some younger throwers are capable of making similar gains.

In reflecting on the 2022 season, Northrup, as well as others who follow the Eagles, can’t help but wonder how much better the team would have been if everyone had been healthy.

A short time later, while playing in a pickup basketball game in his hometown of Springfield, Mass., he tore the meniscus in a knee. He returned to CSC this past year, but had to spend his time rehabilitating instead of competing. He still has three years of eligibility remaining.

In addition, two of the Eagles’ top sprinters—Brodie Roden and Morgan Fawver—were on the shelf much of the time.

Roden, the RMAC Indoor Meet’s Athlete of the Year in 2020 after he won both the 200- and 400-meter races and also anchored both of the winning 4x100 and 4x400 relays at the conference’s outdoor meet in 2021, was not available for the 2022 indoor season and was not at full speed for the outdoor campaign. That’s because he suffered a broken toe during a weight training accident last fall, followed by a lingering bout with COVID.

While Fawver beat all of his teammates in the 60 meters at the Don Holst Open Meet that the Eagles sponsored in late January and also long jumped 24-4 ½ at the Colorado Mines Winter Classic the next week, he was unable to compete at either conference meet because of a hamstring issue. He qualified for both national meets, but was sidelined again early in the action indoors and CSC was forced to notify officials that Fawver would not be able to compete outdoors.

While on the subject of injuries, there was some good news this spring. Northrup is grateful that Collier was able to bounce back from a mysterious sinus ailment that necessitated surgery and forced her to miss the 2021 season. This year she became one of the Eagles’ all-time top sprinters and was her team’s leading scorer.

For the third year in a row, Emma Hageman was a member of the winning duo during the Ladies’ Member-Guest Tournament at Ridgeview Country Club…

Roes Cousins make it three in a row

CSC athletic camps have attracted many this summer

Both the football and girls’ basketball camps at Chadron State College earlier this month were major successes, the coaches report.

Everything shaping up for Crawford Rodeo

Everything is shaping up for the Crawford’s Old West Trail Rodeo that will take place Sunday and Monday, July 3 and 4, according to Brooke Bas…

No doubt about it, numerous Northwest Nebraska high school track and field athletes had excellent seasons this spring. Nearly 40 of them from …

What had been a pitchers’ duel between a pair of hard-throwing lefthanders through the first five innings, turned into something else in the s…

The West won the volleyball match and the East won the football game during Western Nebraska All-Star action in Scottsbluff on Saturday.

CSC Golf Classic is this weekend

After overcoming a sinus problem that required surgery and forced her to miss the 2021 season, Carlie Collier of Dunning, Neb., had an excellent track season this spring. Her time of 12.05 seconds in the 100 meters is fifth on CSC’s all-time list and she ranks second in the 200 meters indoors in 25.21 seconds and fourth outdoors in 24.78.

The Eagles’ Derrick Nwagwu nearly always placed high in the triple jump again this past season. He has CSC’s second best all-time mark in indoors of 49-4 ¼ and third best outdoors of 49-6 ½.

Joe Dumsa had a career-best high jump of 6-9 ¾ indoors this past season for the Eagles and cleared at least 6-6 three other times.