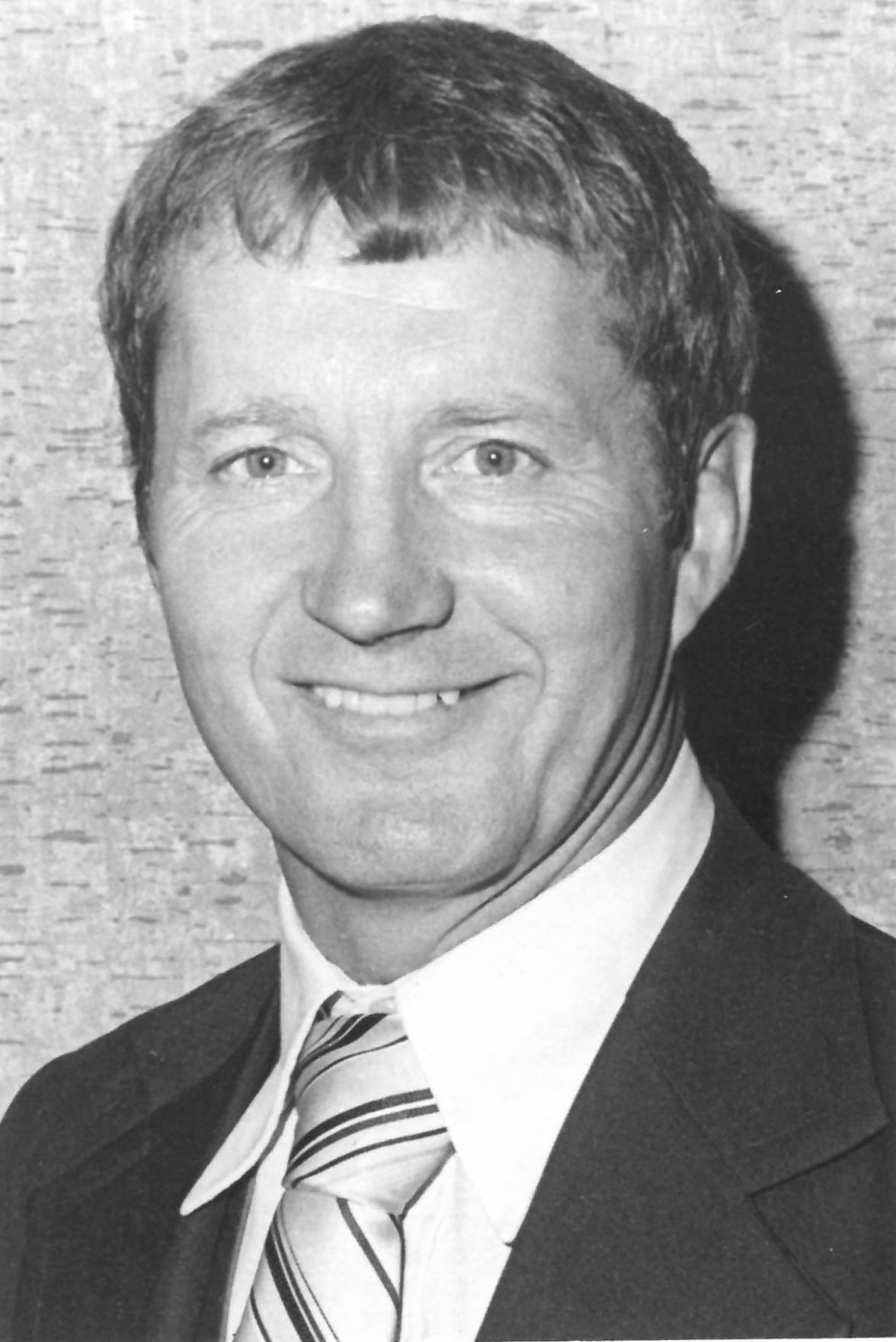 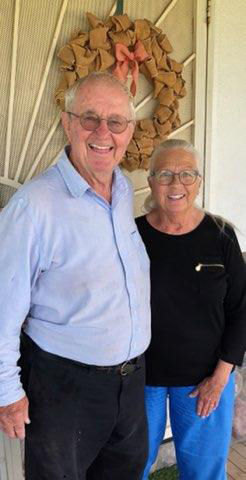 Darold and Kim Andrist pose for a recent photo their home in Arizona.

It’s been 34 years since Darold Andrist left Chadron State College, but he still has lots of stories and fond memories about his five years as the Eagles’ head wrestling coach, an assistant football coach and a stellar member of the Physical Education Department faculty.

Andrist was always energetic, optimistic and enthused. He approached each day with vigor. He also was popular. In 1984, one of the few times the election was held, he was voted the college’s faculty homecoming king. Verona Beguin was the queen.

“I loved my job at Chadron State and if my salary had been better I might have stayed the rest of my life,” Andrist said last week during a telephone conversation. “I enjoyed coaching college wrestling, teaching college courses and the people I worked with, but I had to move on.”

His move was to the Douglas Schools at Box Elder, S.D., as the activities director. He remained there five years, and the past 24 years has lived in Arizona, where he initially managed a motel, stayed in touch with education and most of the time also coached wrestling. At age 75 this spring, he finally retired, ending 52 years of involvement with the sport. Horse racing also has been a passion the past 20 years, and provides some of his best stories.

Andrist, his wife Kim and their three young sons came to Chadron in the fall of 1982, soon after Rodger Jehlicka, who had coached the Eagles the previous two years, resigned to become the head wrestling coach at Adams State in Colorado. The men had been teammates at Winona State, and Jehlicka recommended that Andrist succeed him at CSC.

When Andrist left Chadron State, Jehlicka again was involved in the hiring process. He recommended Scott Ritzen, a two-time national champion and then the assistant coach at Adams State. Ritzen was the Eagles’ next head coach for 25 years and continues as the chairman of the CSC Physical Education Department.

Before arriving at CSC, Andrist had taught and coached at Wayauwega High in Wisconsin for nine years. He met his wife in Wayauwega. He had lots of success at the Eagles’ mat mentor. His teams won three consecutive championships at the NAIA Area Tournament, which including Kearney State and Fort Hays State and a half dozen other teams from Iowa, Missouri, Nebraska and South Dakota.

In addition, Dan Barent, Leonard Hawkins, Mike Max Jeff Parke and Bart Voycheske earned All-American honors by placing at the National Tournament during that span. Max, who died this spring, was a two-time All-American. Andrist also had recruited future All-Americans Bob Waldner and Darrell Bullington before he left. All are in the CSC Athletic Hall of Fame except Bullington.

Andrist already had a master’s degree when he came to Chadron State. His initial salary was $15,250. It had grown to $19,800 when in the spring of 1987, the college’s new president, Dr. Sam Rankin, offered him $27,000 to become chairman of the Physical Education Department and athletic director. He would be replacing Dr. Pat Colgate, who had those jobs, but was being promoted to dean of the School of Education.

“Dr. Rankin called me to his office twice and offered me those jobs,” Andrist recalled. “I was pleased that he thought I was capable of doing them, but I was getting my specialist degree (from CSC) in May and had applied for the job at the Douglas Schools. They would pay me $37,000, so it made sense to take that job. I couldn’t afford to stay at Chadron State.”

With Andrist turning down the CSC offer, Ann Smith was appointed chair of the PE Department and the college’s new football coach, Brad Smith, was named the athletic director before his football team played a game. Brad Smith would by the Eagles’ AD for 26 years.

Andrist spent five years at the Douglas Schools. He also liked that job, but moved to Prescott, Ariz., in 1992 to manage the 26-room motel that Kim’s parents had owned, sold, but had taken back when the buyer defaulted. Andrist noted the motel was in disrepair when it was repossessed and his in-laws needed the help.

“Running a motel is hard work” Andrist noted. “It’s got to be open 365 days a year and something always needs fixing. It is a special motel. It looks like the Alamo. Hollywood producers came and filmed parts of two movies there. We ran it for 17 years before we sold it again in 2008, this time for good.”

In the meantime, Andrist renewed his teaching credentials, did considerable substitute teaching at $100 a day and helped coach wrestling at two middle schools and one high school in Prescott for a total of 16 years. He often was in charge of the practices, but didn’t have time to assume the head coaching responsibilities.

After selling the motel, he became the head wrestling coach at Mayer High in Dewey, Ariz., near the ranch he and his wife had purchased to accommodate his race horsing interests.

He noted that the school has only about 140 students, doesn’t have a middle school wrestling program and he never had enough wrestlers to fill all 14 weight classes. But he had 22 state tournament qualifiers.

“I know most of the guys who joined our team benefited from wrestling,” he stated. “Sports aren’t just about wins and losses. They have a carryover value that will last the rest of their lives.”

“I started going to the races quite a bit and enjoyed betting on the horses,” he noted. “I had fun. I’d come home and tell Kim about it. One day she said to me, ‘I dare you to buy a race horse.’ I thought about that for a while and pretty soon I bought a couple of mares and decided to raise some colts. Of course, I needed a place to keep the horses, so I bought a small ranch at Dewey. It’s about 15 miles from Prescott.”

During the ensuing years, Andrist raised 23 colts, hired trainers to work with them and was seriously in the thoroughbred business. He said his best horses included October Road, a gelding who ran 33 races and placed among the top three at least 20 times. A special mare, EZ in Arizona, won three consecutive races in Canada before he lost her in a claims race. His horses also ran in California, New Mexico and Colorado.

The next question was, “How much money did you make?”

“It’s expensive,” he added. “Besides buying the mares and paying the stud fee, it costs about $20,000 to get a colt ready to race. And some of them get hurt before you ever get them on the track or they get hurt while they’re racing. Then, if you win a race, for say, $12,000, you have to pay the trainer an extra 10%, the jockey also gets 10% and there’s usually a veterinary bill to pay.”

But Andrist is glad to share that he also made money in horse racing.

Andrist no longer owns any horses, but he still visits Arizona Downs to bet on the nags. He said some days he loses, some days he wins. Recently he bet on 19 races and didn’t get to cash in any of the tickets. But another day, he placed a 10 cent bet on the Superfecta, which requires selecting the exact order of the first four finishers in the race. He did it and won $3,840.

“I got lucky, of course,” he explained. “I had the favorite winning the race, and he did. For my second choice I picked a horse with 99-1 odds, and that’s where he finished. I had two more long shots placing third and fourth and that’s what they did, too.”

Horses weren’t the only thing Andrist raised on the ranch. He also raised gourds, the kind that artists buy to carve or paint.

“Some of them (gourds) might bring only 50 cents and the biggest ones might sell for $40,” he explained. “We sold a lot of them for around $12. We had about 60 different types and raised 10,000 the first year, but not so many after that. We also had a big pumpkin patch a few years and raised all kinds of vegetables two years. They’re a lot of work. You have to pick them every morning.”

Andrist said he has much to be thankful for, particularly with regard to his family. Both he and Kim remain healthy and their three sons have turned out well and live nearby. All three boys, Travis, Andy and Ryan, earned college degrees and became teachers. Darold and Kim also have grandson, Otto.

He also noted that Todd Kadolph, Kim’s brother who played tight end, was the Eagles’ leading pass receiver 1983 and graduated from CSC, has been a successful high principal at schools in Indiana and Wisconsin for years.

The game was called a little early because of lightning, but the Chadron High Cardinals produced enough thunder in the first 46 minutes of pla…

Though the Cardinals had a shaky start of things in their Sept. 9 matchup at home against Gering, the girls were able to turn things around an…

The Chadron Softball team picked up wins against Hershey and Alliance last weekend at the Twin City Tournament in Scottsbluff.

Cardinals come back strong after loss to Scottsbluff

The Chadron Volleyball team chalked up their first loss of the season when they hosted the Scottsbluff Bearcats on Aug. 31, coming out strong …

Darold and Kim Andrist pose for a recent photo their home in Arizona.