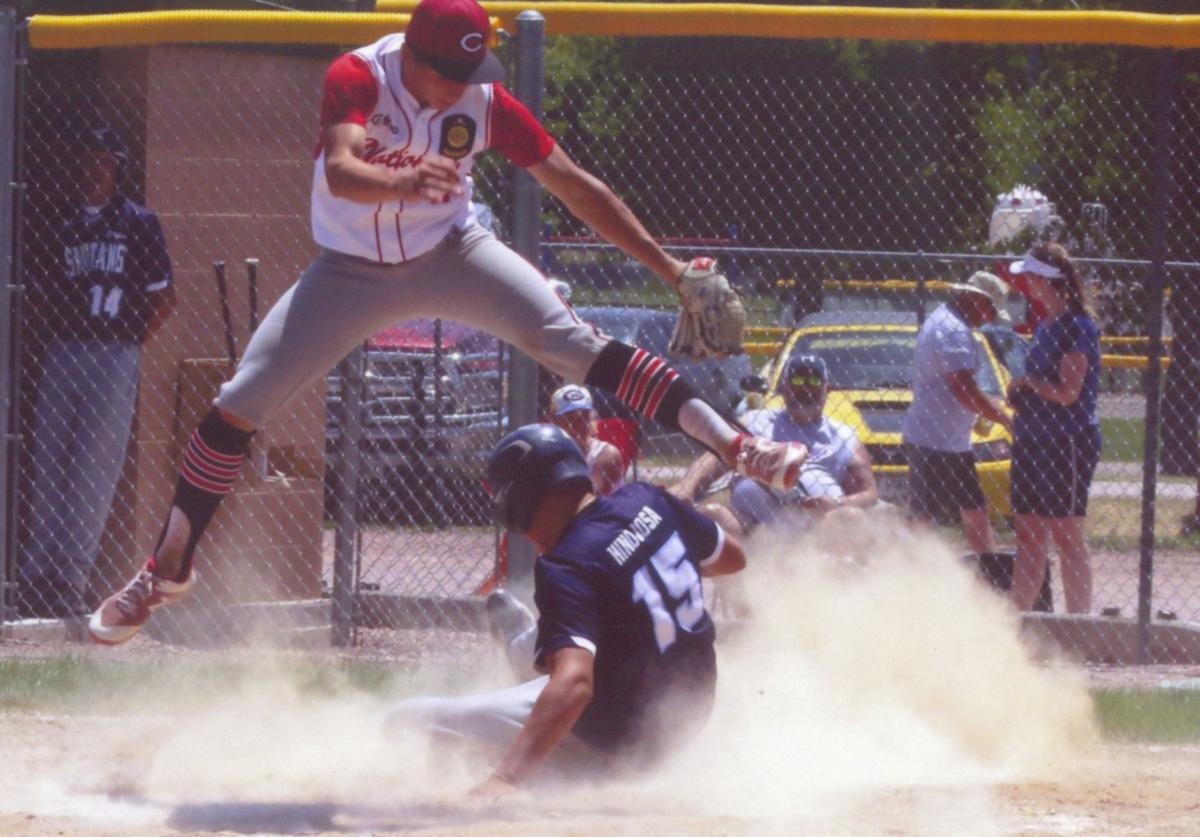 Dawson Dunbar was attempting to cover home after his pitch got away from the catcher in Saturday’s first game of the Junior Panhandle COVID Tournament in Chadron, but wisely jumped out of the way when Alliance’s Victor Hinojosa came barreling into the plate. 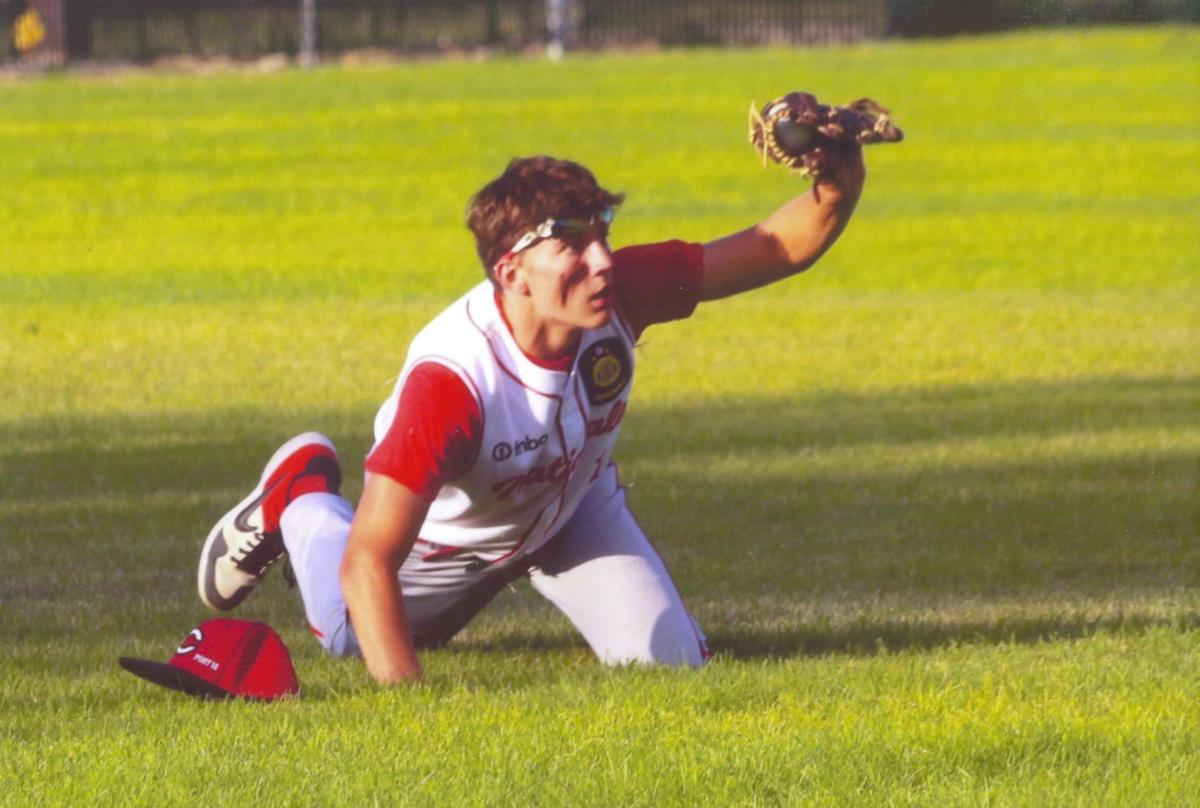 Seth Gaswick made this diving catch of a line drive in leftfield to help Chadron’s First National Bank-Omaha Juniors baseball team to an 8-0 win over Gering in their first game of the Junior Panhandle COVID Tournament in Chadron last Friday night. 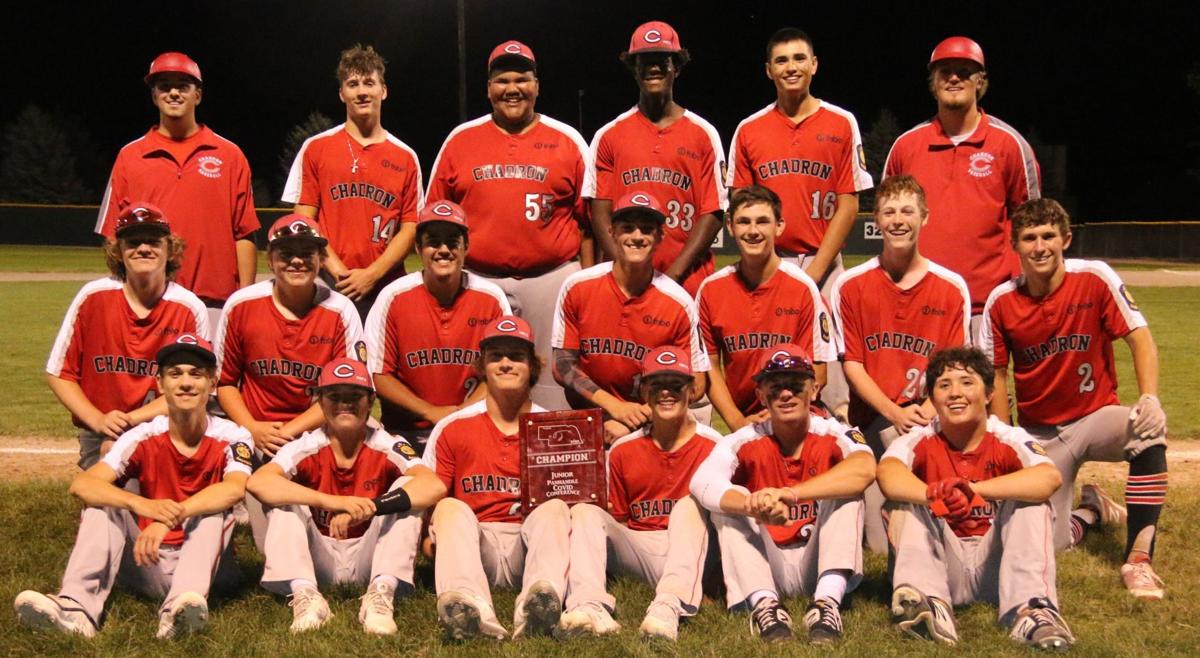 Xander Provance dives for the bag while attempting to steal second base against Gering in Friday night’s game during the Junior Panhandle COVID Tournament. Provance usually plays centerfield, but he also supplied invaluable relief pitching on Sunday, when the Chadron Juniors won the championship.

In dramatic fashion, Chadron’s First National Band-Omaha Legion baseball team did the improbable last weekend. After splitting its first two games, it won four games in a row, including the final three on Sunday, to claim the Panhandle COVID Tournament at Maurice Horse Field in Chadron.

Few teams of any dimension or sport in Chadron’s long and proud athletic history have ever done anything more amazing, simply because it’s not possible. The Junior Nationals went into each of its last four games one loss away from elimination, but they overcame the odds and won all four.

To make things even more exciting, the 4-3 triumph in the final game scored on a suicide squeeze in the bottom of the seventh.

The list of baseball teams that have won three games in one day--or in an eight-hour span in this instance--is short, if it exists. That’s particularly true in this era of strict pitch counts when once a hurler has reached the maximum, he’s can’t return to the mound in a three-day showdown.

That happened to the Chadron team twice. Its ace, Shane Frye, threw a brilliant two-hit 8-0 shutout over Gering on Friday night, but he wasn’t allowed to throw another pitch in the remaining five games. It also prevented Noah Brown from returning to the mound after he’d pitched well on Saturday in the game the Nationals eventually lost.

However, Legion Head Coach Bruce Parish’s efforts to develop as many pitchers as possible during winter workouts in a building owned by KCSR Radio beginning in early January paid dividends. Five other players toed the pitcher’s rubber in succeeding games and had creditable performances. Some of them had seldom, if ever, pitched during the regular season, but they remembered the basics, got the ball over the plate and let their teammates help them out of a few jams.

The only hits Frye gave up in his masterpiece against Gering were a single up the middle in the first inning and a dribbler down the first base line that died before the pitcher could pick it up in the second frame. Gering’s only other baserunners came off a pair of walks. None reached second base.

The Junior Nats finished with a dozen hits, three by Broc Berry and two apiece by Seth Gaswick, Dawson Dunbar, Xander Provance and Noah Brown. Provance’s single up the middle scored Dunbar, who had walked and stole second, with the eighth run in the bottom of the sixth to end the game.

Alliance, which did not play on Friday, was Chadron’s foe in the first game Saturday. The Spartans scored once in each of the first three innings, but the Nationals tallied twice in the top of the fourth by taking advantage to two Alliance errors to tie the count at 3-3.

Alliance went back on top 5-3 in the bottom of the fifth without the benefit of a hit. Both runners came home on pitches in the dirt that got past the catcher. Chadron scored once in the top of the seventh, but Alliance reliever Victor Hinojosa got the final two outs on a grounder and a strike out.

Berry had a pair of hits and Frye was credited with an RBI for Chadron.

After losing to Alliance, Chadron played Gering, a 10-1 winner over Sheridan County in the afternoon, at 7 o’clock Saturday night. The Nationals connected for five doubles in the third inning to spell the difference. Provance, Berry, Dunbar, Frye and Brown hit the two-baggers and each also scored to give the hosts a 7-3 lead.

Gering responded with three runs in the top of the fourth, but Chadron stayed ahead by adding a pair of runs in the bottom of that frame. The Nationals used four pitchers in the game.

Provance slammed the door while hurling the final two innings for a save. Besides his double, Provance also singled. Tanner Gartner led Gering with three hits and Tristan Strauch had a pair.

The Nationals had survived, but still had a big job ahead. It would take three victories on Sunday to win the tourney. That’s exactly what happened. It’s a rare occurrence that fans and players should long remember.

Alliance was again the first foe. Dalton Stewart, who had seldom pitched all summer, drew the starting assignment. He walked three Spartans in the first inning, but wiggled out of the jam while giving up just one run. The next inning when Stewart struck out all three batters was a confidence-booster.

The bottom of the second was a big one for the Nationals. They scored four times on a walk to Jordan Bissonette, an infield hit by Frye, Garrett Reece’s jaunt to first after being drilled by a pitch, an Alliance error and Berry’s single to right to drive in a pair of runs.

Although Stewart yielded eight hits, he also struck out eight and “got big outs when he needed them,” Ellis said. Provance again took over on the mound during the last two innings and notched another save. Some excellent plays in the field helped him set the Spartans down in order in the sixth. Alliance managed one run in the seventh, but Chadron prevailed 7-4.

Provance also was three of four at bat, Berry had two hits and drove in a pair of runs and Frye also hit safely twice.

Next up for the Nationals was Sidney, the tourney’s top seed with a 9-1 record. The Cheyenne County crew had played two easy games, winning 10-0 over Sheridan County and 11-3 over Alliance. The Nationals had already played four times, but their fun was just beginning, as things turned out.

Berry, who had not pitched the previous two days, took the mound for the Nationals. The score was knotted at 1-1 through four innings, but a six-run splurge in the top of the fifth put the hosts in the driver’s seat. That allowed them to replace Berry on the hill so he could pitch again in the second “championship” game.

The Nationals also scored twice in the top of the sixth to go ahead 9-2, but things got a mighty sticky in the bottom of the seventh, when a combination of walks, miscues in the field and a couple of hits helped Sidney to score five times. Stewart, the winner over Alliance in the first game Sunday, came on and fanned the final Sidney batter, preserving the 9-7 verdict.

Elllis noted afterwards that “everybody hit” for his team. The exact number was eight, led by Berry’s four-hit barrage that plated four teammates. Dunbar added two hits and Trey Hendrickson, Frye, Bissonette and Reece also had singles that drove in a run.

Chadron struck first in the finale. Provance walked, stole second, went to third on an infield out and scored on Gaswick’s sacrifice fly. Sidney tied the score in the top of the third with a single, a steal and an infield hit.

Chadron took a 3-1 lead in the last of the fourth with Frye’s single to center the big hit, but Sidney cut down two Nationals at home and the hosts left the bases loaded.

Sidney knotted the score again in the top of the fifth by scoring twice on hard hits that Dunbar, the Chadron shortstop, knocked down, but couldn’t throw out the batter. Chadron coaches said no other shortstop in the region would have reached either shot and both went in the books as base hits.

Provance again relieved in the sixth. He gave up one hit that inning and Gaswick caught a pair of well-hit fly balls in center in the seventh to keep Sidney in check.

The Nationals had the last at bat and made the most of it. But something extremely rare happened first. Sidney’s Jacob Dowse fielded Berry’s line shot to right field and threw him out a first for second straight time to open the bottom of the seventh.

Although Berry “was robbed” twice he still had 12 hits in the tourney.

Chadron’s next batter, Gaswick also slapped the ball to right for a base hit, then stole second and soon moved to third on a passed ball. Sidney intentionally walked Dunbar, and Brown laid down a perfectly placed suicide squeeze bunt to win the game and the tourney.

Gaswick was on his way to the plate as soon as Brown squared around and scored before anyone from Sidney fielded the ball.

Bedlam erupted in the Chadron dugout and spilled onto the field. After playing four games in 24 hours, the Nationals had to be tired, but they also were ecstatic.

Coach Ellis said Brown is among the Nats’ best bunters and he laid it down perfectly. Getting credit for a hit on the bunt, Brown was three of four at the plate while Dunbar, Frye and Ryan Vahrenkamp also had hits for the champions. Luke Kasten had two hits for Sidney. Provance, who pitched the final 2 2/3 innings, was the winning pitcher to go with his two saves.

The Juniors’ five wins improved their record to 14-8.

The Blue teams swept past the Reds during the Panhandle Prep basketball games played at Cougar Palace in Scottsbluff last Friday night.

Dawson Dunbar was attempting to cover home after his pitch got away from the catcher in Saturday’s first game of the Junior Panhandle COVID Tournament in Chadron, but wisely jumped out of the way when Alliance’s Victor Hinojosa came barreling into the plate.

Seth Gaswick made this diving catch of a line drive in leftfield to help Chadron’s First National Bank-Omaha Juniors baseball team to an 8-0 win over Gering in their first game of the Junior Panhandle COVID Tournament in Chadron last Friday night.

Xander Provance dives for the bag while attempting to steal second base against Gering in Friday night’s game during the Junior Panhandle COVID Tournament. Provance usually plays centerfield, but he also supplied invaluable relief pitching on Sunday, when the Chadron Juniors won the championship.