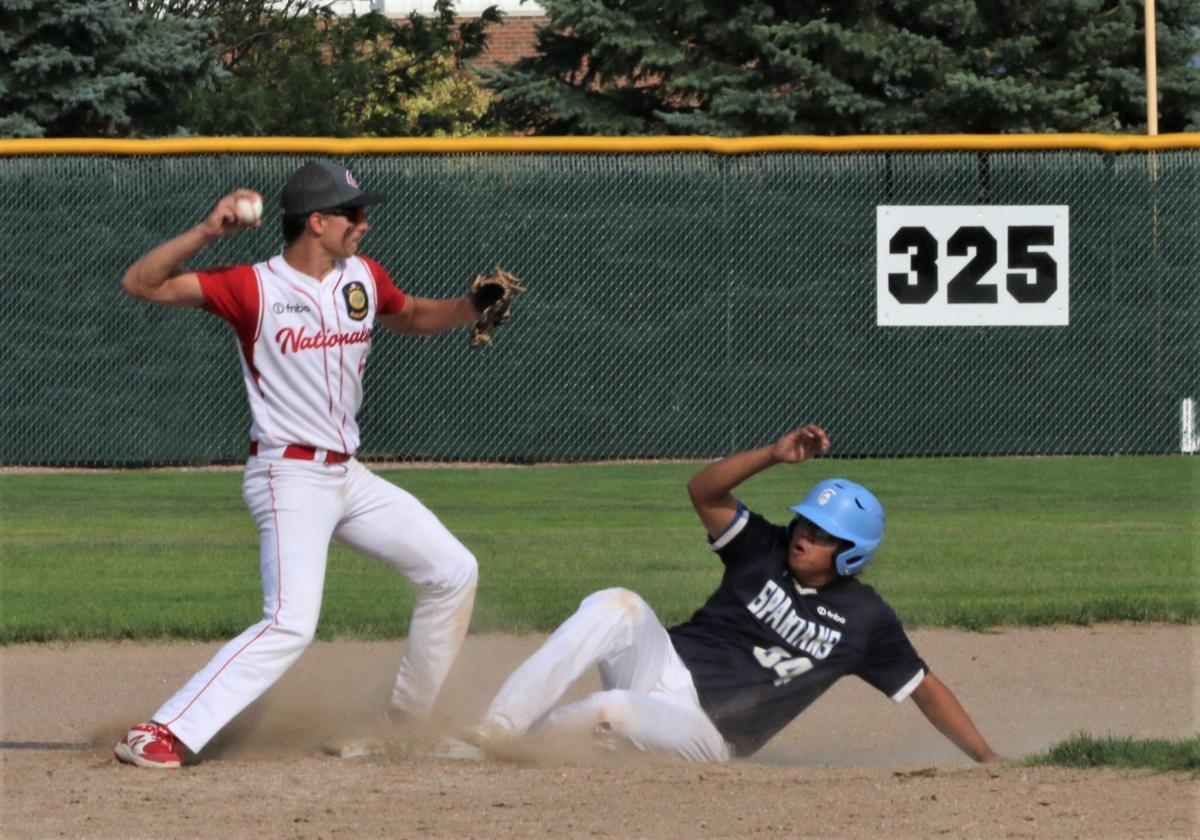 The Chadron Junior Nationals made three double plays, including this one, during their 10-3 win over Alliance in the Class B, District 7 championship game on July 13.  It shows second baseman Seth Gaswick, who took the throw from pitcher Broc Berry, making the putout and throwing to first to complete the twin-killing in the fourth inning.

The Chadron Juniors baseball team made it look easy last week while wrapping up the Class B, District 7 championship on its home field.

After toppling Ogallala 12-0, Gering 12-4 and Alliance 13-2 in the first three games, the team coached by Kyle Sanders and Bubba Page and sponsored in part by First National Bank-Omaha continued to shine by defeating Alliance again, this time 10-3, in the championship game Tuesday, July 13.

The triumph sent the Chadron Juniors to the state tournament for the 11th time in the history of American Legion baseball dating back to 1954, and their first state appearance since 2015. It also was among the most dominating district performances in program history, as the 47-9 margin in runs scored illustrates.

Chadron outhit Alliance 11-4, but the Nationals’ defense also deserved some credit for the victory. It turned three double plays. Centerfielder Daniel Wellnitz also made a diving, rolling catch in the seventh inning to help retire the Spartans in order.

After Chadron and Alliance were set down in order in the first two innings, the Nationals, the visitors on the scoreboard, scored half of their runs in the top of the third on the strength of five hits, a walk and an Alliance error.

Seth Gaswick led off with a single to center. The next batter, Ryan Vahrenkamp, was trying to lay down a sacrifice bunt, accidently popped the ball in the air, but out of reach of Alliance pitcher Nick Wright, for a base hit.

With singles to left field, both Broc Berry and Jordan Bissonette drove in a run. Caden Buskirk’s popup was caught by Alliance second baseman Landen Crowe, but Noah Brown’s grounder hopped over Crowe’s head, scoring two runs to put the Nationals ahead 5-1.

Alliance retaliated a bit in the bottom of the third, when Kysen Walker and Kaden Ferguson led off with singles and Espen Lanik walked to load the bases. One out later, Crowe drove in two runs by hitting the ball over Drew Milburn’s head in left field. However, Berry struck out the next two Spartans to limit the damage.

The Nationals got single runs in the fourth and fifth innings after the leadoff batters walked.

Vahrenkamp scored in the fifth after stealing second, moved to third on Kobi Bissonette’s infield hit and went home when the Alliance catcher’s throw in an attempt to pick off Bissonette got away from the first baseman.

Jordan Bissonette walked in the top of the fifth, Brown was credited with another hit when the ball again bounced past the Alliance second sacker and Gaswick reached on an error by the Spartans’ shortstop to load the bases. Milburn also hit to ball on the ground. This time the second baseman got his glove on the ball, but dropped it, allowing the older of the Bissonette brothers to score, putting the Nats ahead 7-2.

Alliance got its third run in the bottom of the fifth when three Spartans walked and the lead runner came home when a grounder went between the Chadron shortstop’s legs. But Berry fanned three batters during inning to again help hold the fort.

The Nationals added three insurance runs in the seventh inning, when Buskirk was hit by a pitch, Brown got his third hit, this time a clean single to right, and, after the next two batters were retired, Milburn and Bailey singled to drive them home.

After Berry had pitched the first five innings, Buskirk took over on the mound. He hit the first Spartan he faced with a pitch, but faced a minimum of six batters in closing out the game. One of them hit into a double play in the sixth and he struck out the third batter that inning.

In the bottom of the seventh, Buskirk threw just nine pitches, all strikes. Two of the batters grounded out and the third was retired by Wellnitz’s superb catch in center.

The Junior Nats went to state riding on an eight-game winning streak and a 14-8-1 season record. It was their first state tourney appearance since 2015.

Taryn Foxen could be playing again, but she’s in Prague

Eagles wrap up season with 57-6 victory

The Chadron Junior Nationals made three double plays, including this one, during their 10-3 win over Alliance in the Class B, District 7 championship game on July 13.  It shows second baseman Seth Gaswick, who took the throw from pitcher Broc Berry, making the putout and throwing to first to complete the twin-killing in the fourth inning.