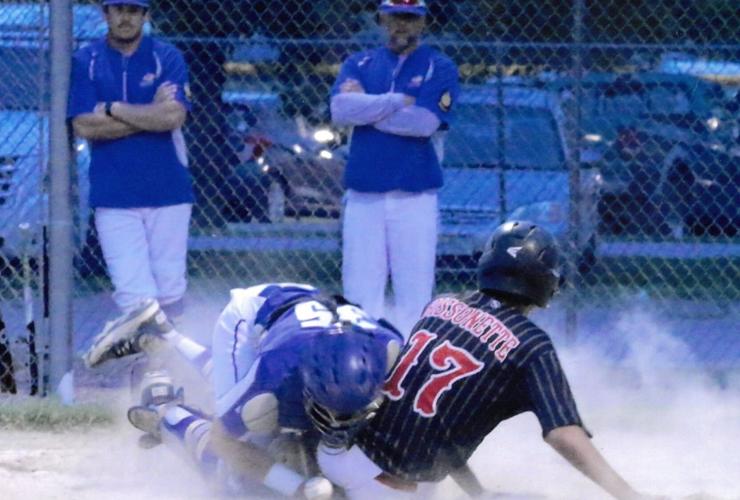 Chadron Nationals’ Kobe Bissonette slid safely into home after the throw to the plate got away from Gering catcher Mason Gaudrault for one of the four runs the hosts scored en route to their 6-5 win over Gering on Wednesday, June 8. The visiting coaches in the background didn’t get very excited. 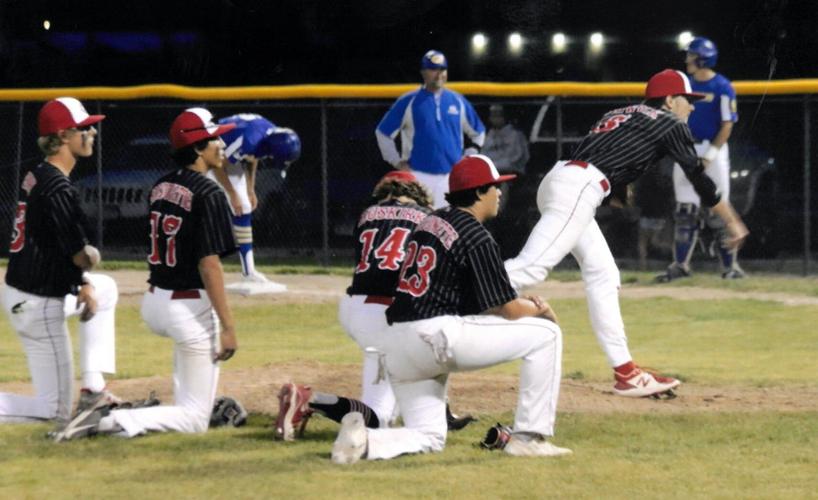 Chadron’s First National Bank of Omaha infielders knell near the mound while Seth Gaswick warms up in the top of the sixth inning during the game with Gering on Wednesday, June 8.  The Nats won 6-5 to raise their record to 11-3.

What had been a pitchers’ duel between a pair of hard-throwing lefthanders through the first five innings, turned into something else in the sixth inning on Tuesday, June 8 when Chadron’s first National Bank of Omaha Seniors tangled with Gering at Maurice Horse Field.

Both teams scored four times in the sixth, when there were several similarities besides the score. Both starters were replaced on the mound, both teams allowed a towering pop-up in the infield to drop and most of the base hits by both teams were more of the blooper variety than hard-hit blasts.

Thanks to the fact that Chadron had a 2-1 lead prior to the four-run uprisings, the Nationals won 6-5 and raised their record to 11-3, one of the team’s best starts in a while. It was a thrilling, satisfying victory, to be sure, the kind that can give a team more momentum.

The starting pitchers were Noah Brown for Chadron and Dalton Wiess for Gering. Both are highly regarded and proved that point. Brown struck out eight and gave up just one hit during his five and a third innings on the hill. Wiess fanned seven Nationals and yielded seven hits, several of which never left the infield, but were hit slow enough or far enough in the gap that the batters scratched out a hit.

Gering scored first in the bottom of the second. Carter Reisig, who is an excellent football and basketball player at Mitchell High, but plays baseball for Gering, was hit by a pitch to lead off the inning. After the next two batter were retired, one on an infield out that allowed Reisig to move to second, the following batter hit the ball to short, but the throw sailed over the head of the Chadron first baseman, allowing Reisig to score.

That was the only error that the Nationals committed.

Chadron moved ahead 2-1 in the bottom of the fourth, when Kobe Bissonette, Caden Buskirk and Quinn Bailey all singled and Broc Berry hit a sacrifice fly to centerfield.

Brown struck out the side in the top of the fifth. The Nats’ Jordan Bissonette opened the bottom half of the fifth by getting on second, thanks to a two-base error by the Gering second baseman. He moved to third when Dalton Stewart laid down a perfectly placed sacrifice bunt, but the Nationals couldn’t score when the Gering third sacker threw out the next two Chadron batters at first.

Then came the fateful sixth.

Brown struck on the first Gering batter, before issuing his first bases on balls. Gering’s Tristen Strauch then singled to center for his team’s first hit. After Brown loaded the bases with another walk, Chadron Coach Kyle Sanders made the pitching change, with Seth Gaswick coming in from left field to take over.

The Nationals could have helped themselves, but Reisig’s towering shot that went above the light poles in the neighborhood of first base was not caught. Thankfully, it landed in foul territory. A couple pitches later, Reisig hit a soft line drive to left field that scored two runs and left runners on second and third.

The next batter, Mason Gaudrault, laid down a squeeze bunt, that scored the runner from third who was on his way home before the pitch was thrown. Gaudrault also beat the throw to first. Gering’s Sam Bliss drove in the fourth run with a sacrifice fly to center. Things seemed more desperate for Chadron, when the next batter was nicked by a pitch. But the side was finally retired on an infield out.

Now it was time for the Nationals to come to bat in the sixth. A third Bissonette, Jared, who had replaced Buskirk at third base after Buskirk suffered a bloody nose during an encounter with a visitors’ baserunner, lead off with a single to right. Gaswick followed with a ball hit to deep short and beat the throw to first.

Gering made its pitching change with Reisig replacing Wiess. Both baserunners immediately moved up on a wild pitch. Another pitch that got away from the Gering catcher allowed the youngest of the Bissonette brothers to score. Berry drew a walk and both Gaswick and Berry scored when Bailey hit a shot down the first base line that barely stayed fair to make the score 5-5 with no outs.

After the first out was finally posted, something similar to what had happened it the top of the sixth when Chadron failed to catch the high infield pop-up occurred again. This time, Jordan Bissonette hit a high volley that was about 25 feet down the third baseline. Three Gering players—the pitcher, the catch and the third baseman--all had a chance to catch it, but they didn’t. There was some confusion on the base paths, but the alert and speedy Bailey wound up on third.

That brought up Chadron’s No. 9 hitter, Dalton Stewart. He dumped a low liner that landed about 25 feet behind second base. The Gering centerfielder made a diving stab to catch it, but the ball rolled away from his glove. Bailey raced home and Chadron had a 6-5 lead. There was still just one out.

Brown walked to load the bases, but the rally ended when Reisig struck out the next two Nationals.

Although Gaswick, who would be the winning pitcher if he could hold the fort in the top of the seventh, fanned the first two Gering batters, there was still some drama remaining.

Strauch singled to right field and Wiess beat out a grounder hit toward second base, putting two runners on base. That brought up Reisig. His shot to right field may have been the hardest Gering hit all night. But Stewart, who had driven in what proved to be the winning run in the previous inning, caught the ball to end the game.

Coach Sanders said he was nervous when he saw the ball leave Reisig’s bat, but was able to breathe again when he saw Stewart was in perfect position to make the grab. The fans had definitely gotten their money’s worth.

It was fitting that Stewart was among the Nationals’ “stars of the game.” In about two weeks, the recent Chadron High graduate will be leaving the team to join the U.S. Navy.

For the third year in a row, Emma Hageman was a member of the winning duo during the Ladies’ Member-Guest Tournament at Ridgeview Country Club…

At the end of the high school track and field seasons, it’s always fun to glance over our shoulders to see what’s coming down the pipeline. Fo…

Roes Cousins make it three in a row

CSC athletic camps have attracted many this summer

Both the football and girls’ basketball camps at Chadron State College earlier this month were major successes, the coaches report.

Everything shaping up for Crawford Rodeo

Everything is shaping up for the Crawford’s Old West Trail Rodeo that will take place Sunday and Monday, July 3 and 4, according to Brooke Bas…

No doubt about it, numerous Northwest Nebraska high school track and field athletes had excellent seasons this spring. Nearly 40 of them from …

The West won the volleyball match and the East won the football game during Western Nebraska All-Star action in Scottsbluff on Saturday.

Chadron Nationals’ Kobe Bissonette slid safely into home after the throw to the plate got away from Gering catcher Mason Gaudrault for one of the four runs the hosts scored en route to their 6-5 win over Gering on Wednesday, June 8. The visiting coaches in the background didn’t get very excited.

Chadron’s First National Bank of Omaha infielders knell near the mound while Seth Gaswick warms up in the top of the sixth inning during the game with Gering on Wednesday, June 8.  The Nats won 6-5 to raise their record to 11-3.