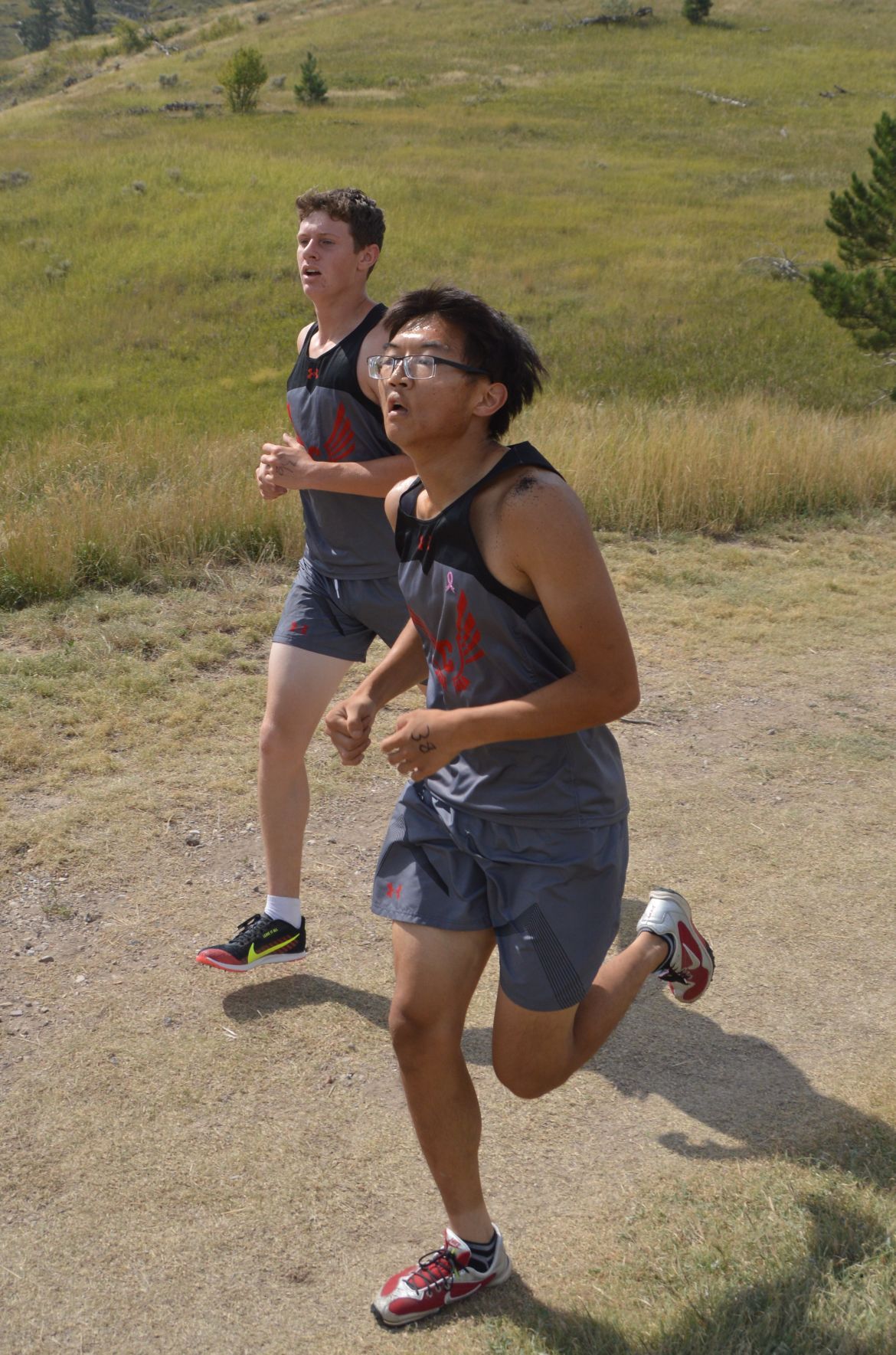 Junior Gavin Sloan, right and senior Carter Ryan keep pace with each other. The boys were the top two finishers for Chadron.

Led by sophomore Talissa Tanquary, the Sidney girls finished with 23 points to edge Gering, which had 25. Chadron was a close third with 30.

Sidney seniors swept the top three places to run away with boys’ championship with 16 points. Gering was again the runner-up with 36 and Chadron third with 57.

Cameron Brauer led the Red Raiders by completing the five-kilometer course in 17 minutes, 48.5 seconds. Daniel Bashtovoi was second in 18:13.3 and Mitch Deer third in 18:27.5.

Gering freshman Nathan Seiler was fourth in 18:48.5 and teammate Eli Marez, a junior, was fifth in 19:07.1. Sophomore Zeke Christiansen of Garden County placed sixth and junior Gavin Sloan of Chadron was seventh.

Tanquary’s winning time was 21:05.5 while Chadron junior McKinley Fuller was second in 22:02.7, followed by 8th grader Marissa Bonsness of Rapid City Christian in 22:27.4.

Jenna Davis of Gering and Paityn Homan Crawford rounded out the Top 10.

Senior Carter Ryan was the second Chadron runner across the varsity finish line in the boys’ race. He was 12th in 19:49.22. Caden Galbreath was 18th, Garrett Reece 23rd, Chayse Swinney 24th and Zander Rust 26th.

Since the CSC course, located in the vicinity of C Hill, is a true “cross country course” that is challenging, nearly all the times were slower than they had been at the two previous meets in the Panhandle this fall.

The Chadron teams will run at Alliance on Saturday and at Ogallala on Thursday, Sept. 23.

For Chadron State rodeo fans, the highlight of the college’s rodeo this past weekend centered almost entirely around sophomore Parker Johnston…

It was a busy week for the Chadron High School volleyball team, facing eight opponents last week with a triangular against Bridgeport and Sidn…

Chadron State was steady and methodical with the football Saturday night.

The Chadron High golf team finished a bit above the middle of the pack at the Gering Meet on Tuesday, Sept. 15.

Junior Gavin Sloan, right and senior Carter Ryan keep pace with each other. The boys were the top two finishers for Chadron.