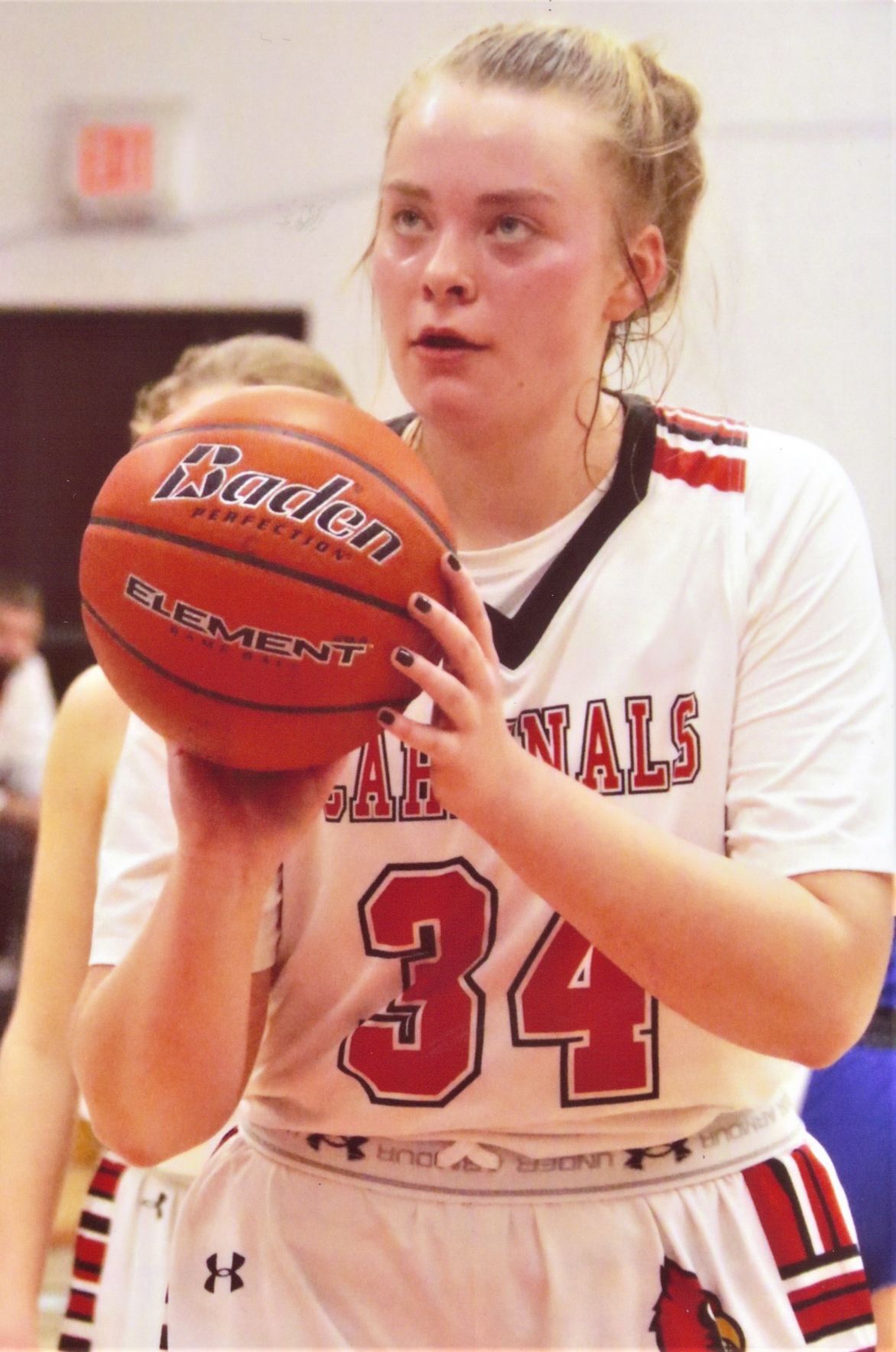 Chadron High senior Anika Burke has made 82 of 95 free throws for 86.3 percent while leading the Panhandle in accuracy at the line both of the past two years. 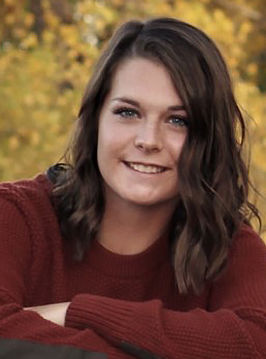 Elle Ravenscroft of Cody-Kilgore has had the highest scoring average among western Nebraska girls the past two years.  She’s signed to continuing her basketball career at Chadron State College. 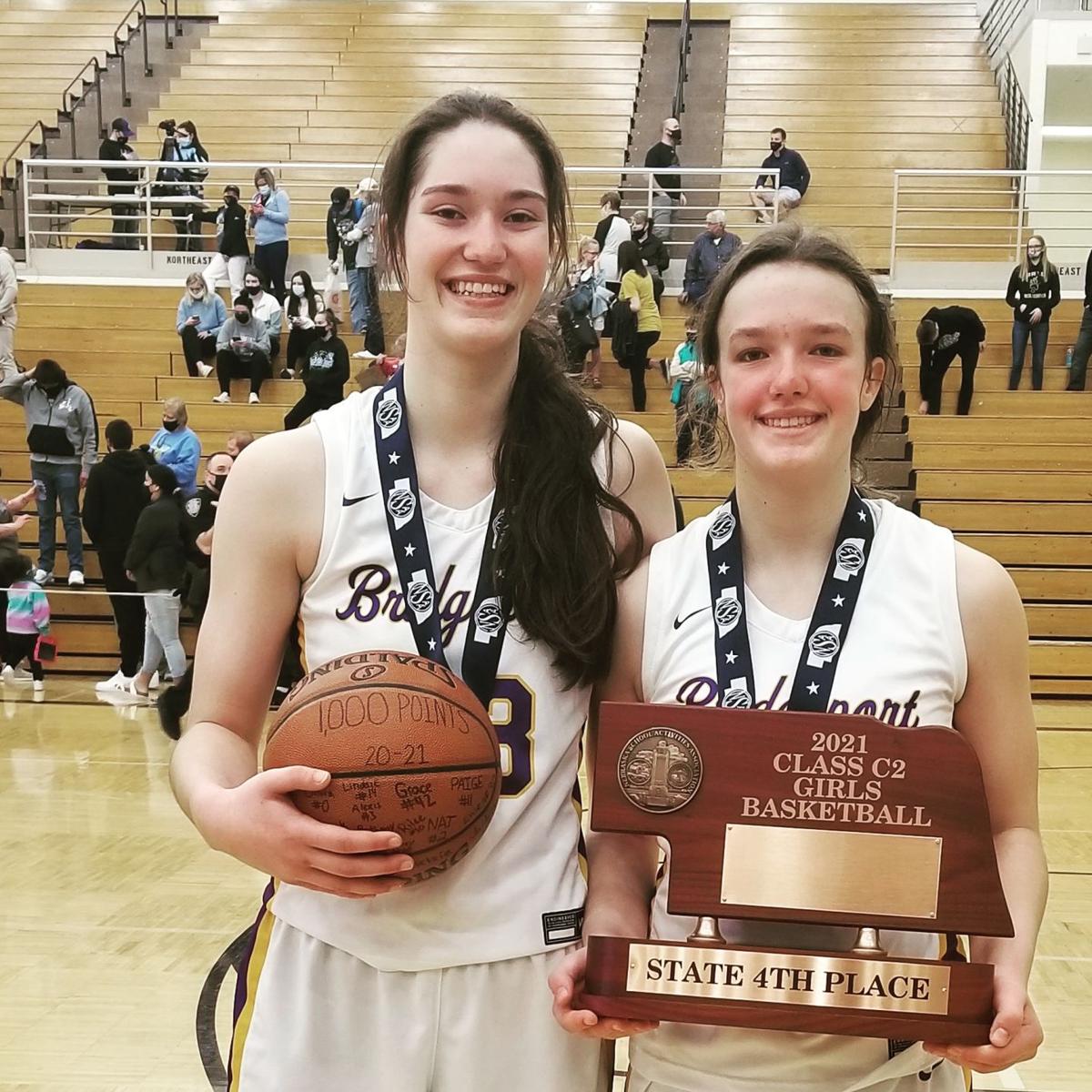 Sisters Ruthie (left) and Olivia Loomis-Goltl combined to score 1,064 points for Bridgeport this past season. Ruthie shot a Panhandle-best 64.2 percent from the field, eclipsed 1,000 career points as a sophomore and also blocked 116 shots.  Olivia shot 50.5 percent and was credited with 106 assists and 80 steals.  She’s holding the Class C-2 fourth place trophy from the state tournament.

Girls in western Nebraska had some bright spots during the 2020-21 high school basketball season and also provided hope for the future.

Four Panhandle teams qualified for the state tournament and two of them didn’t have their seasons ended until they met the eventual state champions in the semifinals.

The state qualifiers were Scottsbluff in Class B, Sidney in Class C-1, Bridgeport in Class C-2 and South Platte in Class D-1.

Three of them had to defeat teams from the eastern portion of state in the district finals to qualify. Scottsbluff topped Elkhorn High, Sidney downed Auburn and Bridgeport bested Leigh. South Platte clinched its trip to Lincoln with a win over central Nebraska’s Shelton.

In the first round of the state tourney, highly regarded Lincoln Lutheran downed Sidney and Hartington Cedar Catholic defeated South Platte, but Scottsbluff overwhelmed defending Class B champion and this year’s No. 3 seed Crete, and Bridgeport won by 18 points over Nebraska City Lourdes.

During the semis, Elkhorn North, in its first year of operation, stopped Scottsbluff enroute to winning the Class B championship by downing Firth-Norris in the finals, and perennial power Crofton ended Bridgeport’s season and then shaded neighboring Ponca 46-42 for the Class C-2 title.

Bridgeport finished with a 24-5 record, South Platte was 20-3, Scottsbluff 19-7 and Sidney 18-7 to pace the Panhandle teams in victories.

Of the four, Sidney is taking the biggest graduation hit. That includes leading scorer and rebounder Karly Sylvester along with the next two top scorers. South Platte will definitely miss its leader, Autumn Dickmander, who averaged 18 points while the school’s first 1,000-point scorer. Scottsbluff had lots of balance and depth, and is due to return a junior and three sophomores who were among this year’s top five scorers.

Then there’s Bridgeport, which this year had just one senior, albeit four-year starting guard Sydney Nein, who led the Panhandle with 117 three-pointers the past two years. It’s who’ll be returning for the Purple Bulldogs that is impressive. They include the Loomis-Goltl sisters, Ruthie, a sophomore, and Olivia, a freshman, who combined to score more than 1,000 points this year while still underclassmen.

Other capable players for Bridgeport include sophomore Mackenzie Liakos and freshman Brooklyn Mohrman, who combined to score more than 14 points a game, hand out 222 assists and come up with 174 steals. It would seem that a dynasty is just beginning.

Ruthie Loomis-Goltl, a 6-foot-2 center, finished the 2020-21 season with 1,004 points to become the first Panhandle player, male or female, to reach four figures in scoring as a sophomore. She shot 64.2 percent from the field and averaged 19.4 points this winter.

Her defense also was strong. She blocked 116 shots, two more than her total last season. Only Alicia Ostrander of Gordon-Rushville with 136 her senior year in 2010-11 has blocked more shots in a season than Loomis-Goltl swatted this year. Abbi Porte of Sidney also blocked 116 in 2013-14.

Three seniors from the West concluded their seasons with more than 1,000 points for their careers. The leader was Morrill’s Ilycia Guerue, who finished with 1,381 points, 12th highest on the all-time chart compiled by the Chadron Record. The others are Elle Ravenscroft of Cody-Kilgore, who finished with 1,256 points and Dickmander, who tallied 1,182 points the past four years.

For the second year in a row, Ravenscroft had the region’s highest scoring average. She averaged exactly 20 points a year ago and 21.5 this year. Ruthie Loomis-Goltl was second this year at 19.4 a game, followed by Guerue and Dickmander at 18 points apiece.

Olivia Loomis-Goltl is fifth on the list with a 17.3 average.

Guerue set the pace this year this year in both total assists with 133, one more than Bridgeport’s Liakos, and steals with 175, an overwhelming figure to be sure, but nine fewer than her 2019-20 total of 184. Guerue also was credited with 160 steals as a freshman in 2017-18. No other Panhandle player has swiped the ball more than 150 times in the past 12 years, according to this newspaper’s stats.

Unfortunately, Guerue missed all but the first eight games of her sophomore year because of a severe knee injury, or her stat totals would have been even more impressive.

Other stat leaders this year include Gordon-Rushville senior Jayla Brehmer and Garden County sophomore Jena Spady, both with 230 rebounds in 24 games for 9.6-point averages along with Chadron senior Anika Burke, who was the region’s most deadly free throw shooter for the second straight year.

The Chadron Sizzlers, a fifth grade travel basketball team, completed its 2021 season as the CSC Hoop Shoot champions the last weekend of Marc…

With all the Cardinals available for the first time this spring, the Chadron High School track and field team made some big strides at the Mit…

Probably to the surprise of nearly everyone, Jonn McLain, a math and social studies teacher and the girls’ basketball coach at Chadron High Sc…

The Chadron State College football team will be doing something new on Saturday. For the first time during the spring, the Eagles will visit t…

Jumpers produced many of the points for the Chadron High School track and field team last Thursday at the Ed Moore Invitational Meet in Ogallala.

Chadron High senior Anika Burke has made 82 of 95 free throws for 86.3 percent while leading the Panhandle in accuracy at the line both of the past two years.

Elle Ravenscroft of Cody-Kilgore has had the highest scoring average among western Nebraska girls the past two years.  She’s signed to continuing her basketball career at Chadron State College.

Sisters Ruthie (left) and Olivia Loomis-Goltl combined to score 1,064 points for Bridgeport this past season. Ruthie shot a Panhandle-best 64.2 percent from the field, eclipsed 1,000 career points as a sophomore and also blocked 116 shots.  Olivia shot 50.5 percent and was credited with 106 assists and 80 steals.  She’s holding the Class C-2 fourth place trophy from the state tournament.