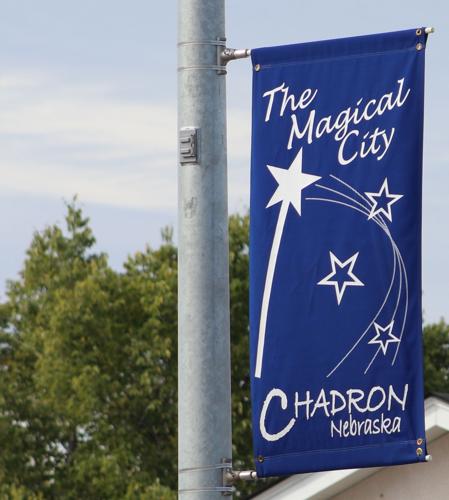 Chadron is known as The Magical City because in 1885, settlers moved from the old town six miles east of present-day Chadron to the new site virtually overnight. 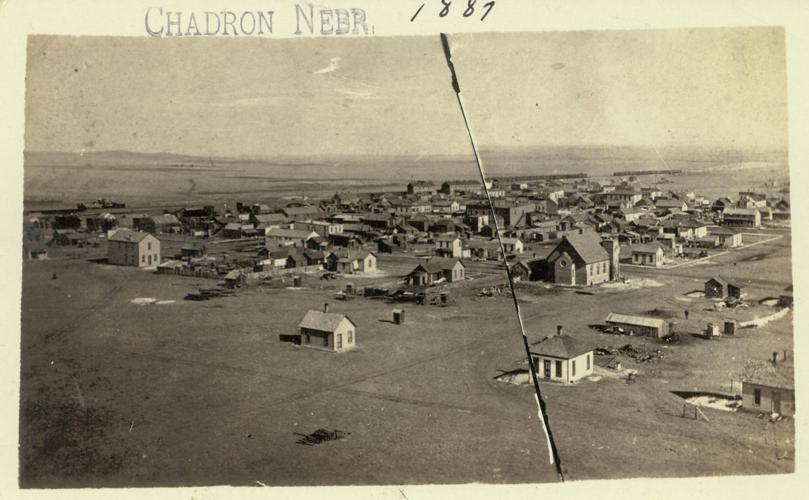 This postcard depicts the City of Chadron in 1887, two years after the area's early settlers picked up and moved the community to its present-day site overnight, earning the city the nickname "The Magical City."

A drive through Chadron on the recently renovated Highway 20 welcomes visitors and residents alike to “The Magical City.”

The banners, which were hung in mid-September, were purchased for the city’s 125th anniversary celebration in 2010. After being displayed that year and two or three more consecutive years, they took a hiatus but reappeared this year with the completion of the highway project. They are expected to remain until the city’s Christmas banners are displayed.

So what is the magic of which these banners boast?

To understand that, one must take a trip back in time to the pioneer days of Nebraska, when the first settlers were arriving in the northwestern Panhandle, then known as Sioux County.

One of those early settlers was newspaperman E.E. Egan, who initially planned to settle on Bordeaux Creek with several other colonists and start a newspaper for the community. However, Egan learned that when the railroad, which had been built up only as far as Valentine, made it this far west, it would likely detour west of the Bordeaux Valley. While scouting the countryside one day, he topped a divide and discovered the Chadron Creek Valley at the confluence of the creek and the White River.

“I was simply enraptured and decided upon the spot that here was my future. There was a scant half-dozen settlers in the whole valley. Among them I remember Orville Brainerd, Jim Toomey, Lem Cooper, Adams, Mrs. Fannie O’Linn, Cook and son. Brainerd and Toomey were much interested in my adventure, and while patrons appeared few outside the Half Diamond E Ranch, the grazing cattle and coyotes, they promised if I would come over the divide with my newspaper they would see that we should get a post office established and I was to be the postmaster,” he later wrote.

It was there Egan established his newspaper, the Sioux County Journal (the predecessor of The Chadron Record), some six miles west of present-day Chadron, publishing the first issue Nov. 6, 1884. In years previous, there had been a post office using that name between Fort Robinson and the Pine Ridge Agency, but it had been discontinued.

“The date-line of The Journal in its first issue was “Chadron, Nebraska, Nov. 6,” and thereby hangs the tale of how the town was named and how saved from one-time threatened extinction. As I have related, it was promised by settlers on my spring trip that a post office would be applied for, and that I should serve as Uncle Sam’s representative,” Egan wrote. “When I arrived with my print shop in the fall, however, the first news item I struck while yet on the road was that Mrs. Fannie O’Linn had, during my absence east, sent in a petition and an office had been established named O’Linn, located on the O’Linn homestead, with the lady herself as postmaster. This news was laden for me, with the chill of the “also-ran,” for not only had my dream of official life vanished, but what was more, much of the charm was lost in the change of the name. Besides, all me electro datelines were Chadron. In the first pangs of disappointment for a few minutes I contemplated turning back on the road to my first love with the colony on the Bordeaux. Emphatically I declared that I would not publish a paper at O’Linn, Nebraska. I rested the “paint hosses” in the road while I chewed the cud of bitter meditation and quoted Moore’s lines on “Twas ever thus from childhood’s hour, etc.” But not for long. The lure of the beautiful picture I remembered of Chadron valley, together with an inborn trait of not turning back after taking hold of the handles of the plow, decided me to go forward and to publish The Journal under the date-line of Chadron, in spite of all the power of post office, widow and Uncle Sam combined.”

To decide meant to do, and keep going, and each week the glories of the White River country, linked with the name of Chadron, were blazoned on the world.”

O’Linn resisted Egan’s efforts to call the town Chadron to no avail.

“The power of the press was too much. The incoming tide of home seekers, business men and speculators from the four quarters, all sought for and heralded the name Chadron, and the next year when the railroad gave the name to its townsite, the postal authorities acceded to the demand of the citizens and the post office name was also changed,” he wrote.

Before the name change became official, however, Egan and the other settlers faced another challenge that could well have relegated the name of Chadron to the history books. During the summer of 1885, as the railroad approached the Bordeaux area, it began planning for a townsite on the White River. The community of O’Linn/Chadron was a natural choice, but negotiations with O’Linn, whose homestead was imperative to the railroad’s plans, turned sour when the railroad refused to name the town after Fannie O’Linn.

While negotiations drifted, a stranger to the area purchased a dairy ranch six miles east of O’Linn/Chadron, then sold it to the railroad as a townsite to be named Bordeaux.

“Deepest gloom pervaded the old town and I occupied a lodge of sorrow not least for the oblivion whose shadows already seemed to engulf by cherished home,” Egan later wrote.

Representatives of the railroad approached Egan in an attempt to gain the townspeople’s cooperation.

“I asked regarding its proposed name and was told it was to be Bordeaux. And then with a zeal of eloquence I never equaled before or since, I poured out my whole soul in a plea for the preservation of the name of Chadron. I don’t think I could have overlooked any argument in its favor, chief of which, of course, was that it had been so persistently and widely advertised, was known all over the west, which would be a valuable asset to up-building a new town; also that it was beloved by the people and if the name went to the new town it might be possible to get the business houses of the old town to follow,” Egan later recalled.

Egan’s appeal swayed the railroad to name the new townsite Chadron, and the settlers in the old town moved east to the new town Aug. 1, 1885. It is the unique nature of this move that earned Chadron its nickname as the new town sprang up overnight “as if by magic.”

“Moving outfits were in demand at fancy prices, because everybody wanted to “do it now.” Every available vehicle was pressed into service and buildings were raised on wagons to be hauled for temporary shelter to the new town. One who has never witnessed the moving of a whole town, buildings and all, can hardly conceive the picturesque appearance of such an event,” Egan wrote. “The road over prairie and hill was a continuous procession of houses, stocks of merchandise, household goods and people. Many of the merchants left their goo on the shelves, moving the store complete, and Ben Loewenthal completed the picture by keeping his store open for business and actually selling goods from his establishment while it was being trundled over the prairie.”

According to Chadron’s Centennial Book, “This neat trick of moving a town to a new place earned Chadron the nickname of “The Magical City. By the afternoon of the first day, most of the old businesses were operating and new ones were going up.”

Chadron is known as The Magical City because in 1885, settlers moved from the old town six miles east of present-day Chadron to the new site virtually overnight.

This postcard depicts the City of Chadron in 1887, two years after the area's early settlers picked up and moved the community to its present-day site overnight, earning the city the nickname "The Magical City."