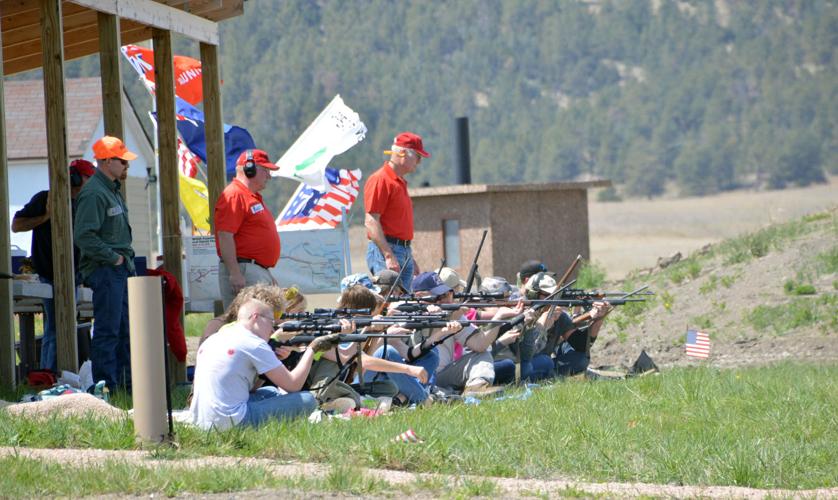 The 16 participants in the “Appleseed Shoot” take aim at their targets, under the watchful eye of their instructors, including John Dueker of Chadron standing in the red shirt on the right, 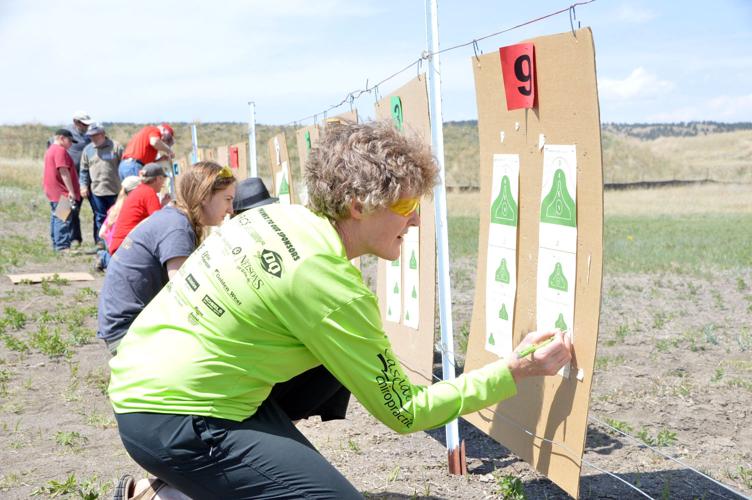 One of the particpants, Michaela Duprey of Rapid City, marks off the bullet holes on her target.

HOT SPRINGS – The Fall River Shooting Complex, located just north of Hot Springs along Highway 79, was abuzz with activity this past weekend. The Complex hosted its first-ever Project Appleseed marksmanship clinic, put on by the Revolutionary War Veterans Association (RWVA), a non-profit organization dedicated to teaching American heritage and history, as well as traditional marksmanship skills.

According to the organization’s website, the “Appleseed Shoots” are named after the American folk hero Johnny Appleseed who toured the country planting appleseeds so that future generations would benefit. In the same regard, the RWVA hosts Project Appleseed events throughout the nation “to ensure the next generations will benefit from the same Liberties as the generations before them.”

John Dueker of Chadron, a member of the RWVA for the past four years, is the person responsible for bringing this past weekend’s shoot to the Hot Springs area, after first noticing the sign for the Fall River Shooting Complex while traveling Highway 79 last fall.

After looking into the site – which is owned by the South Dakota Game, Fish & Parks but also co-managed by the Fall River Gun Club – it was agreed that the complex would be the ideal setting for the area’s first-ever Appleseed Shoot.

Dueker and Fall River Gun Club President Dan Harley, who were both present at the shoot this past Saturday, were thrilled to have been able to host the event, which brought in 16 shooters of all ages – some as from as far away as Bozeman, Mont. – for two days of shooting and instruction.

Again, according to, www.appleseedusa.org, “Participants are taught fundamental rifle marksmanship skills that are to allow a Rifleman to be accurate out to 500 yards, with iron sights, standard rifle and surplus ammo. This is the traditional ‘Rifleman’s Quarter mile’, which is an uniquely American Rifleman skill, that has been part of this nation from the very first days.”

“Most of the instruction at an Appleseed is conducted at 25 meters, at reduced size targets to simulate 100 to 500 yards. This well proven technique allows us to concentrate on the shooter’s mechanics and less time walking a range. At those locations that allow for actual distance shooting, participants are often able to see first-hand that the skills that they learn at 25 meters directly apply to actual distances out to 500 yards. These foundational skills are not being passed on to future generations, and so Appleseeds are great for new or experienced shooters alike.”

For Michaela Duprey of Rapid City, who has attended a few other Appleseed Shoots around the region, the event provides an opportunity for her to spend time with her family, while also working towards earning her Rifleman Certificate. She was attending this past weekend’s shoot with four other members of her family, along with a neighbor.

Participants can use any caliber gun they choose to participate in the shoots, but Duprey said her group was all shooting .22 rifles – considering both the cost of the ammunition and the stamina to shoot approximately 400 rounds over the two days.

Club President Harley was pleased with the turn-out of the first-time event as was proud to have the Fall River Gun Club help bring the Appleseed Shoot to the area.

“I’m a firm believer in the Second Amendment and I can’t think of a better family event to have been held here,” Harley said.

The 16 participants in the “Appleseed Shoot” take aim at their targets, under the watchful eye of their instructors, including John Dueker of Chadron standing in the red shirt on the right,

One of the particpants, Michaela Duprey of Rapid City, marks off the bullet holes on her target.