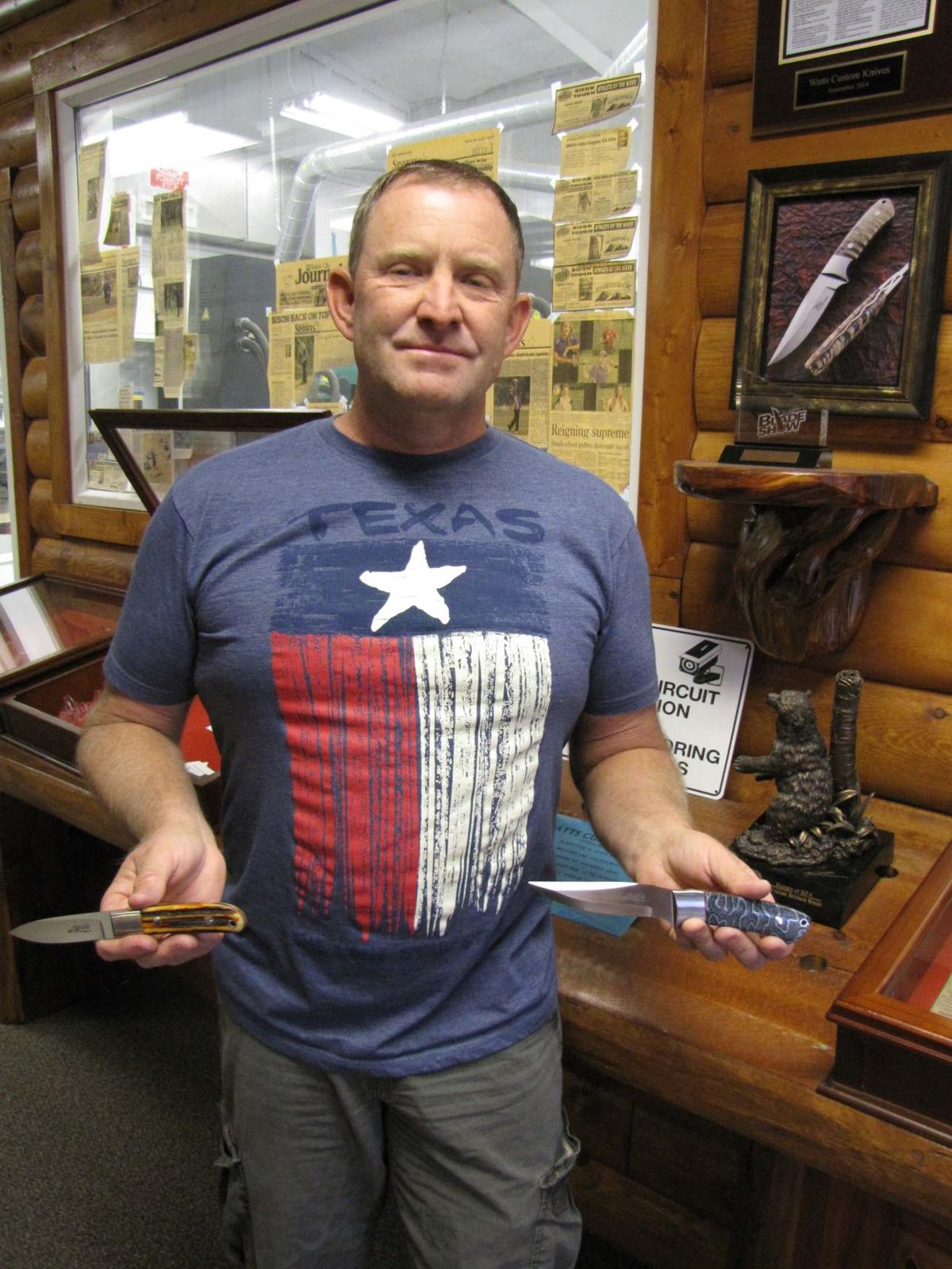 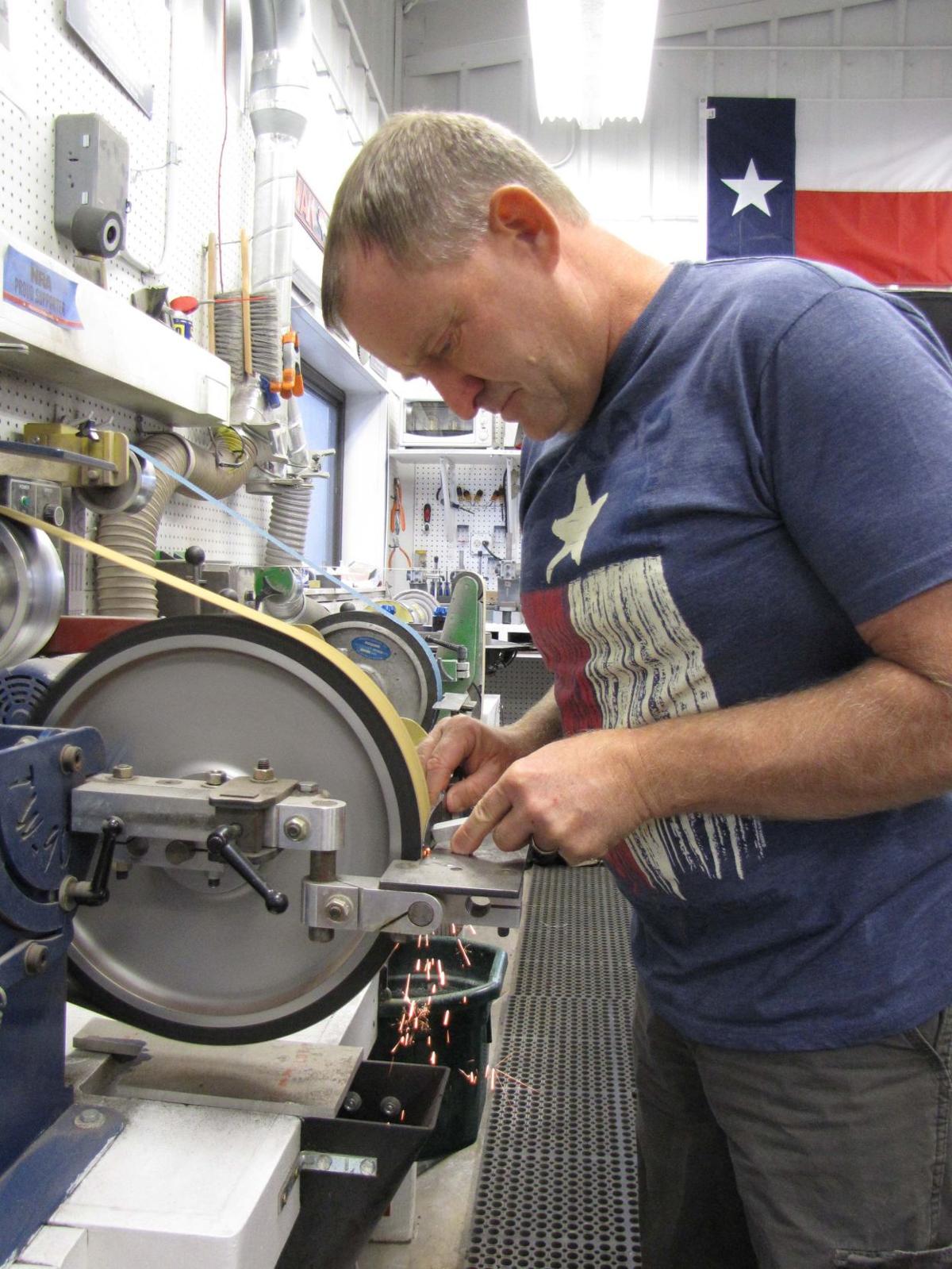 HOT SPRINGS – About nine years ago (2007) Rod Watts was visiting with Rusty and Sally Preston, his neighbors, at his part-time home in Port Isabel, Texas – since 2000, Watts has been a Hot Springs resident for most of the year.

Rusty Preston is a knife maker, specializing in slip-joint knives, pocketknives. And Watts spent some time watching Preston work. “I’d like to build a knife someday,” he mentioned, mesmerized by the craft.

So Preston offered to show him how to build do this, and together they built a pocketknife in Preston’s shop, about a week’s worth of effort to accomplish, Watts noted.

“After that, I was just hooked into it,” Watts said.

In a short time, he began ordering thousands of dollars of knife-making equipment, like grinders, files, a kiln, as well as knife handle materials. And so began Watts’ deep dive into the art and craft of custom knife-making.

By 2011, Watts proved he had mastered at least some elements of the craft when he won Blade Magazine Show’s Best New Maker Award.

His typical customer, however, is a knife collector from either East or West Coast who wants a knife as part of their collection of knives, not a deer hunter looking for a blade to skin deer – although some knife buyers do use their knives as tools, not collectibles, he said.

Watts’ knives range from $450 to $1,000 in costs. And there are basically six steps to creating a custom blade.

• Using 6-foot long bars of stainless steel CPM 154 stock, Watts cuts this knife stock to the appropriate length, and scribes the blade design on to the metal stock. The blade designs are all Watts’s own creations, and they include shapes for fighting, spear points, daggers. Currently, he only makes fixed blade knives because folders, slip-joints are more limited in knife shape, because this blade must fit into the handle.

• Watts then grinds the knife’s shape out of the metal stock using a variety of grinders: Most are belt-run disk grinders, some horizontal, some vertical; others are other types of grinders. The belts used are everything from 50 grits – this is used to literally cut the basic shape of a knife from the bar stock, and it tears through metal very quickly -- down to micron grits, essentially high degree polishers. Watts also does filing work, to create intricate designs on the knife’s handle during this step.

• When the knife is shaped to its almost finished form Watts heat-treats the metal in a 1900 degree kiln to create a Rockwell 60-61 hardness metal blade. This level of hardness is chosen as a balance point between being so hard it becomes brittle and so soft it doesn’t hold the edge.

• A bolster, the thick metal junction between the handle and the blade, is added. This provides a smooth transition from the blade to the handle, strengthens the knife, adds durability and provides a counter-balance.

• The next step is affixing the custom handle materials. Here stag, fossilized coral (some of it is brain coral), Giraffe leg bone, Mammoth tooth from Siberia (not The Mammoth Site!), water buffalo horn which can come in a rainbow of colors, Musk ox horn, spruce cone cores and carbon fiber are the materials he uses, and the patterns, textures and color choices available are astounding.

• The final step is putting a hand-rubbed satin finish on the knife.

It takes somewhere between five and 12 hours to finish a single knife, Watts said, with the hand-rub finishing process being the most time consuming element.

So what does Watts get out of this craft?

“It’s a very rewarding hobby, and addicting hobby,” he said, smiling. Yet between running two other businesses, High County Erectors and Accouter, Watts said he has little time to further his hobby, although he keeps on trying.