Contractors completed major mechanical and electrical upgrades to the Ross Hoists at Sanford Underground Research Facility in Lead. Newly installed equipment can be identified by its dark blue color. 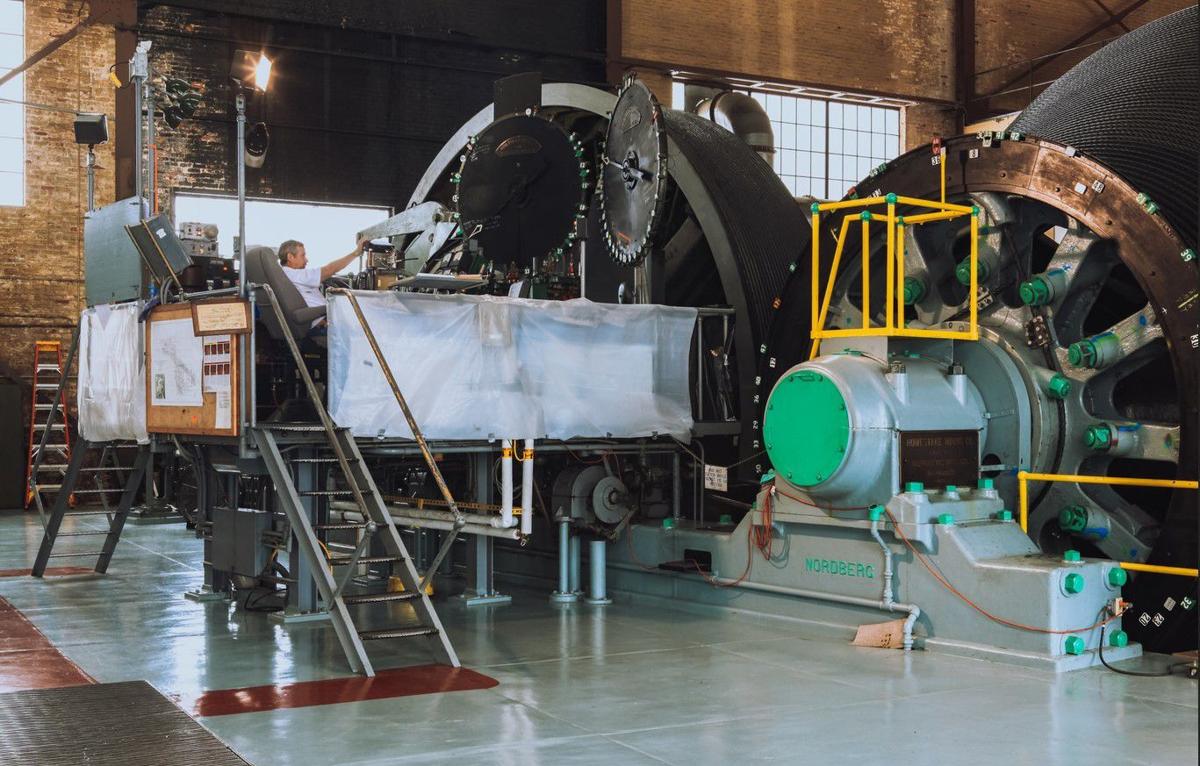 Ross Hoist operators previously controlled the hoists from open-air platforms with large dials that indicated the position of the conveyances in the shafts.

Contractors completed major mechanical and electrical upgrades this week to the Ross Hoists at Sanford Underground Research Facility in Lead.

During upcoming construction of the Long-Baseline Neutrino Facility and future operation of the Deep Underground Neutrino Experiment, the Ross Hoists will power the excavation of 800,000 tons of waste rock and serve as the conveyance for people, materials and equipment underground. Originally manufactured in the 1930s, the hoists needed to be upgraded to support this ambitious undertaking.

“It’s remarkable that the Ross Hoists were still in such good working condition, although several key components needed to be refurbished or replaced,” said Colton Clark, project engineer with the LBNF/DUNE Project at the Department of Energy’s Fermi National Accelerator Laboratory.

Mechanical upgrades were made to both the cage hoist, which conveys people and equipment, and the production hoist, which will skip excavated rock to the surface to be crushed and transported to the Open Cut. The upgrades included new motors, brakes and clutches for both hoists, as well as advanced safety features and auxiliary brakes for the cage hoist.

The Ross Hoists were originally powered by direct current motors, with two motor-generator sets converting alternating current from the nearby substation into DC power. The electrical portion of the upgrade replaced the original DC motors and motor-generator sets with AC motors and variable frequency drives. Additionally, a new transformer was installed to maintain a modern industry standard voltage.

An enhanced visual change to the Ross Hoistroom is an upgrade to the hoist operator platforms. The former open-air platforms with manual controls have been replaced by enclosed booths and electronic operating systems.

This is one of the final projects in a series of infrastructure improvements geared toward preparing the Ross Complex as part of the LBNF/DUNE Project. Previous efforts replaced Ross cages, skips and ropes; strengthened the Ross Headframe; and restored the tramway and built the conveyor system. Additionally, the Ross Shaft Rehabilitation project refurbished the entire Ross Shaft.

“These upgrades are necessary for the construction and operation of LBNF/DUNE,” said Mike Headley, the executive director of Sanford Lab. “And these facility improvements benefit the site overall, providing access and reliability to all science users who do research at Sanford Lab.”

“These contractors are subject matter experts on the hoists, and they are still amazed by what Nordberg did in the 1930s,” Clark said. “They've never worked in a hoistroom that was built like this. The size of it, the cleanliness, how everything's been maintained — they are completely impressed.”

Several components being replaced in this upgrade are of historic significance, including the controls and large dials on the operator platforms. These components will be preserved by Sanford Lab for educational purposes.

“The facility’s hoists are an amazing engineering feat,” Headley said. “They have served the site well for nearly 90 years, and we’re now upgrading them with modern systems to support Sanford Lab for decades into the future.”

Contractors completed major mechanical and electrical upgrades to the Ross Hoists at Sanford Underground Research Facility in Lead. Newly installed equipment can be identified by its dark blue color.

Ross Hoist operators previously controlled the hoists from open-air platforms with large dials that indicated the position of the conveyances in the shafts.