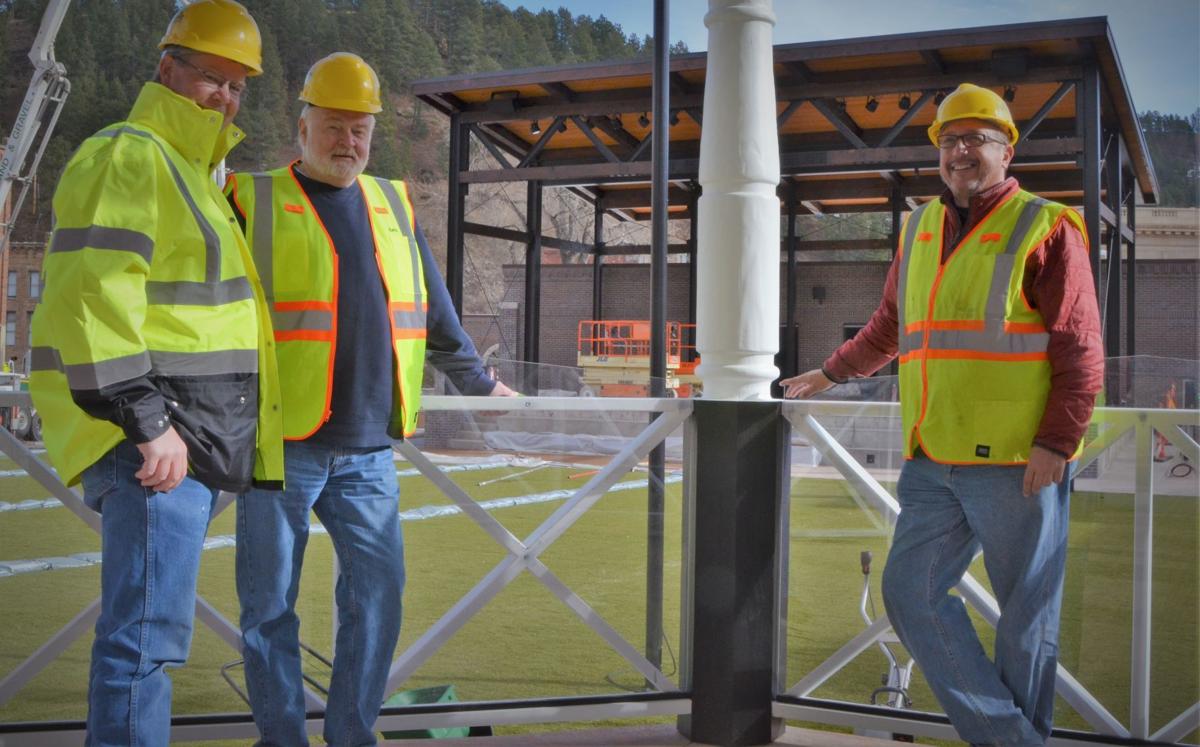 From left, Kevin Kuchenbecker, Bill Pearson and Bobby Rock tour Deadwood's soon-to-be-completed Outlaw Square, to be dedicated with a grand opening on Dec. 6. 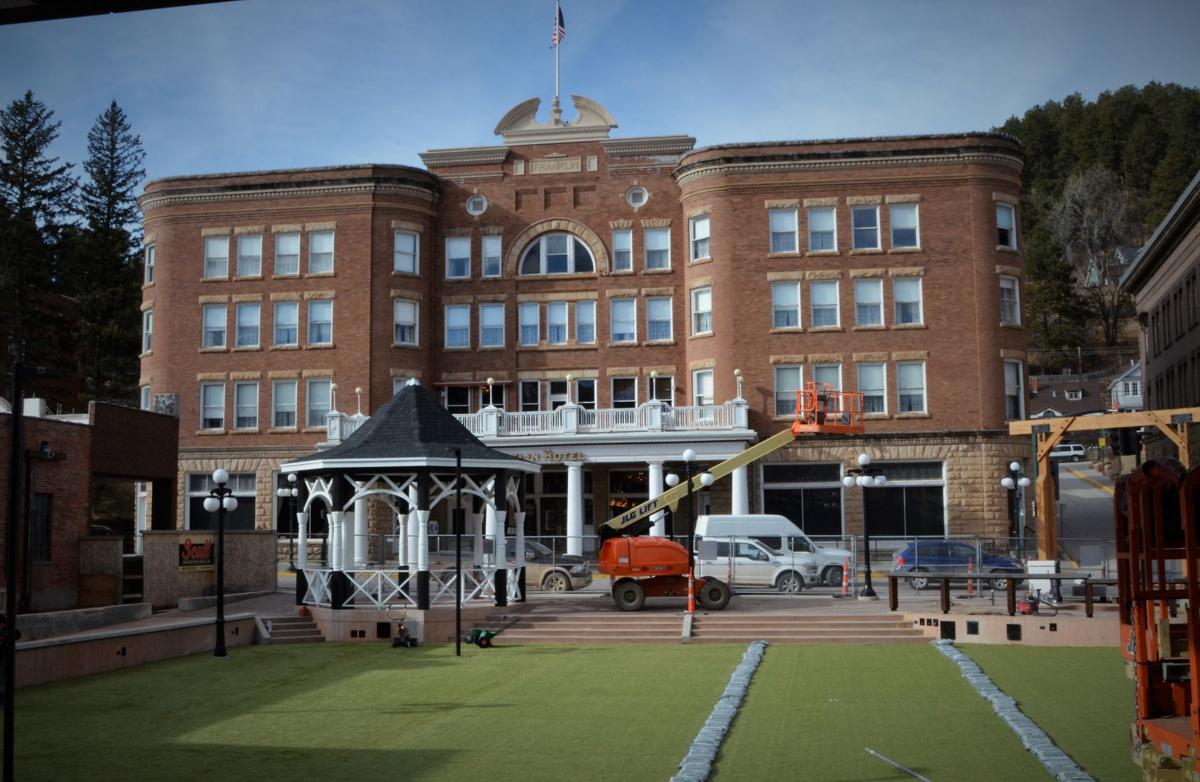 The historic Franklin Hotel forms a backdrop for Outlaw Square, soon to be completed in downtown Deadwood. 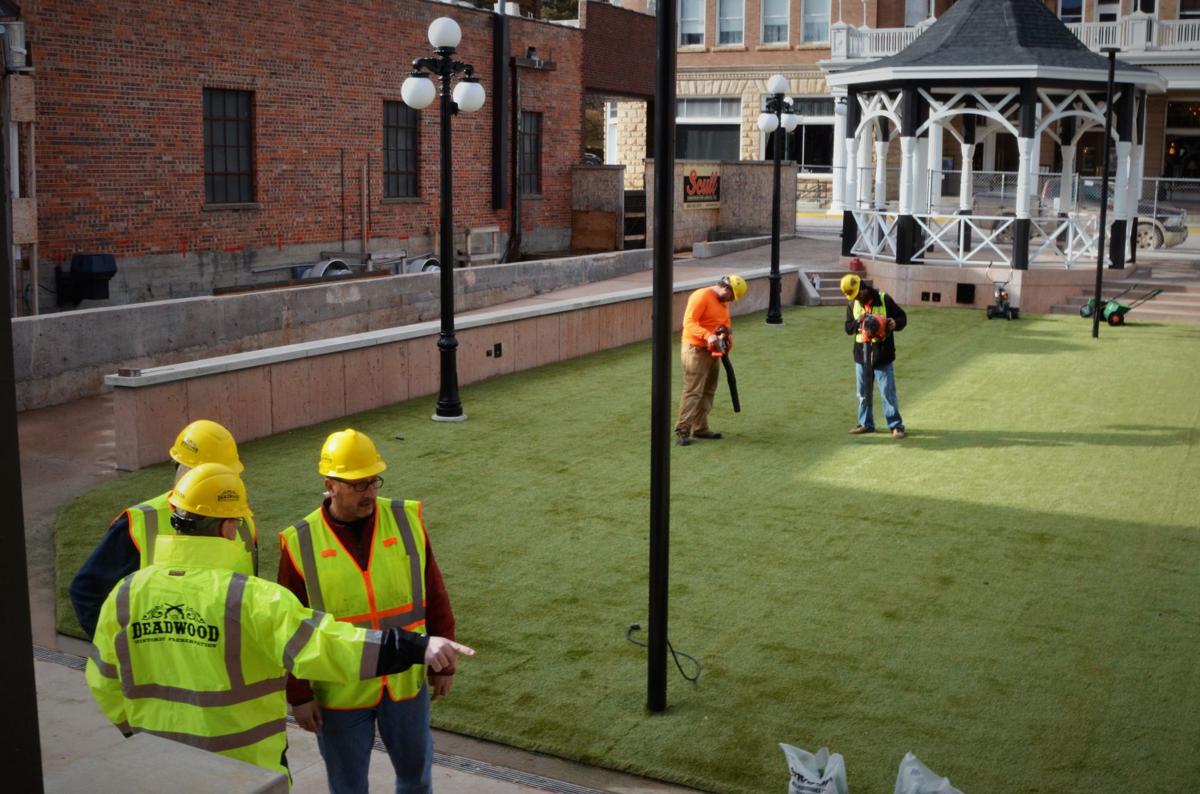 From left, Bill Pearson (at rear) Kevin Kuchenbecker (back to camera) and Bobby Rock talk about details of the new Outlaw Square, nearing completion in Deadwood.

DEADWOOD | It’s down to the final details for the completion of Deadwood’s new downtown gathering venue.

Outlaw Square may be two months late in opening, but organizers will be ready for a full slate of events and activities after a scheduled Dec. 6 grand opening.

“We’re in the homestretch with Outlaw Square,” said Kevin Kuchenbecker, Historic Preservation Officer for the city of Deadwood.

On a warm Tuesday afternoon, crews from Scull Construction of Rapid City were completing the final pour of concrete for walkways on the Deadwood Street side of the square and also infusing the field turf commons area with sawdust filler.

Once final detail work and a general clean-up are completed, the project will be turned over to the city within the next 7-10 days, Kuchenbecker said.

The square’s $4.8 million price tag includes $400,000 each for a retaining wall along City Creek which runs to the west of the square and the realignment of Deadwood Street to the east.

Construction was paid for with $2 million in grants from the state of South Dakota and $2 million from Deadwood Historic Preservation, gaming revenues and licencing fees.

“It’s been a challenge, a lot of unknowns, but we’re extremely excited to have it completed,” Kuchenbecker said.

Fully expected construction delays included archaeology of the three-quarter acre site bordered by Main Street and the Franklin Hotel on the north, Deadwood Street and Hickok’s Hotel & Casino on the east and the Silverado Casino on the west.

“Any new construction in the city of Deadwood requires archaeology because we are a national historic landmark,” Kuchenbecker said.

Most recently, the site was home to a motel which was torn down, but over the city’s history it was also the location of Deadwood’s city hall and jail and later an opera house and theater, all destroyed by fires in the late 1800s and early 1900s.

Historical items recovered included structural timber from wood dated to have begun growing in 1640, an old boiler and faceplate from the earlier structures, and even a section of jail cell wall, complete with iron window bars.

That section of wall is being preserved and will be incorporated as public art adjacent to the square, Kuchenbecker said.

Presently vexing is the deferred arrival of a synthetic ice skating rink, manufactured in Switzerland, but delayed en route to the U.S. by a work stoppage on the docks at Barcelona, Spain.

Square executive director Bobby Rock said the rink is expected to arrive in New York in the next few days, then will be trucked cross-country to Deadwood.

Once the rink arrives, assembly is expected to take about four days, with a tentative opening of Nov. 25, he said.

The synthetic ice system, requiring no refrigeration, is used in rinks in Fort Collins, Colo., and in Sioux Falls, Rock said.

“What’s really cool about it, is if I decide to do Christmas in July we can put the ice up for two weeks,” Rock said.

Nearby Deadwood Elementary School will incorporate ice-skating for its K-5 physical education curriculum, already outdoor-heavy with skiing, hiking and biking for students.

“We have the greatest physical education programs at Lead-Deadwood in the country,” said Bill Pearson, president of Deadwood Main Street Initiative.

“We’re really looking forward to getting it open and bringing it to the community,” Pearson said.

Once open, the square will offer at least 250 days of activities over the next year, Rock said.

The busy schedule includes movie nights on Mondays, a farmer’s market, featuring fresh produce in season or South Dakota-made products, on Tuesdays, 14 summer concert nights on Wednesdays through the Deadwood Mountain Grand, and a Deadwood History fun night for families on Thursday.

The square is available for family events, including weddings in a gazebo.

The large main stage will also be the new home of the Deadwood Jam music festival and the square is planned as another focal point for other annual Deadwood events, including Kool Deadwood Nites and the Days of ’76 celebration.

“It’s going to be very versatile,” Rock said. “The options are endless with the square.”

From left, Kevin Kuchenbecker, Bill Pearson and Bobby Rock tour Deadwood's soon-to-be-completed Outlaw Square, to be dedicated with a grand opening on Dec. 6.

The historic Franklin Hotel forms a backdrop for Outlaw Square, soon to be completed in downtown Deadwood.

From left, Bill Pearson (at rear) Kevin Kuchenbecker (back to camera) and Bobby Rock talk about details of the new Outlaw Square, nearing completion in Deadwood.