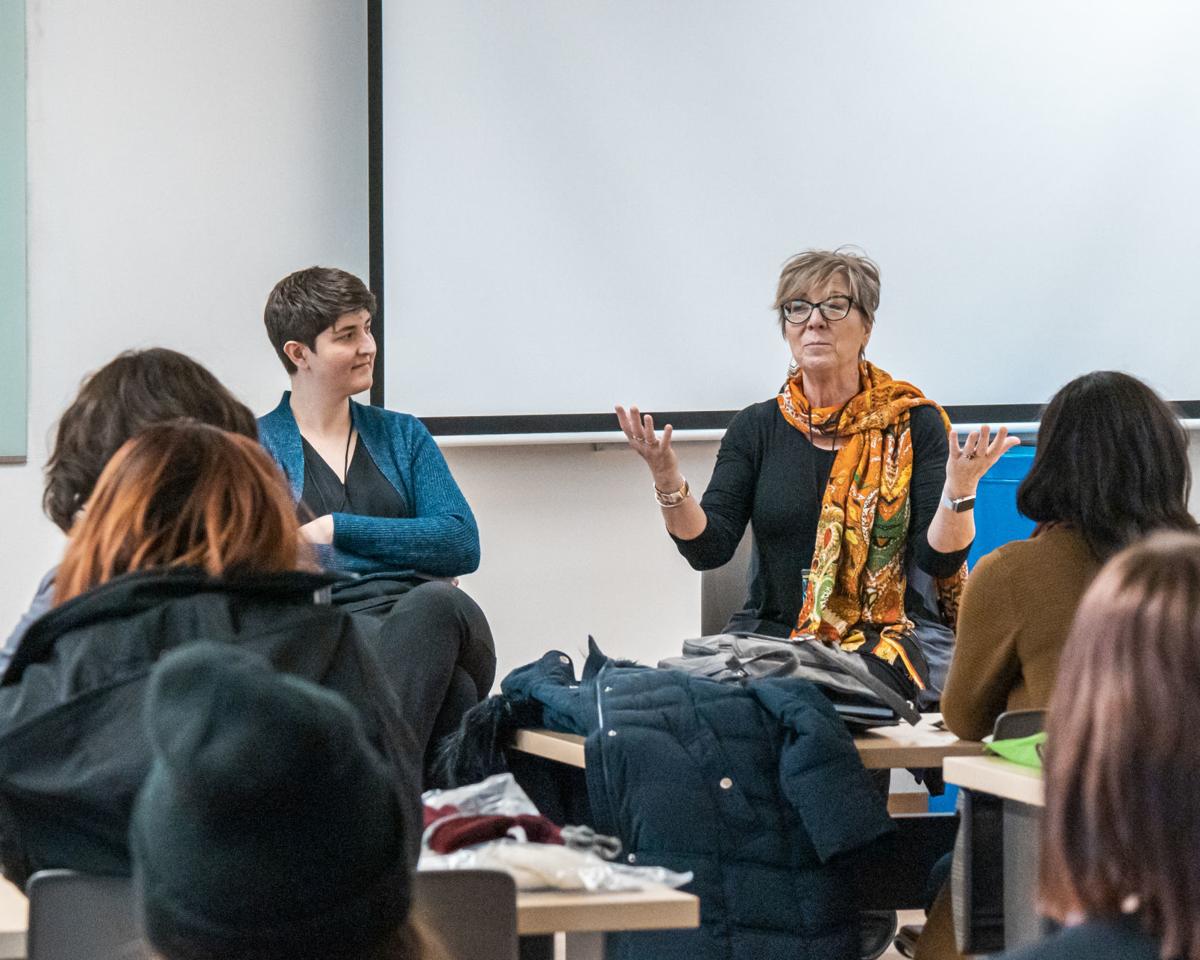 Constance Walter, communications director at Sanford Lab, addresses a room of students during a science communication panel at the Conference for Undergraduate Women in Physics (CUWiP) at Black Hills State University on Jan. 18. 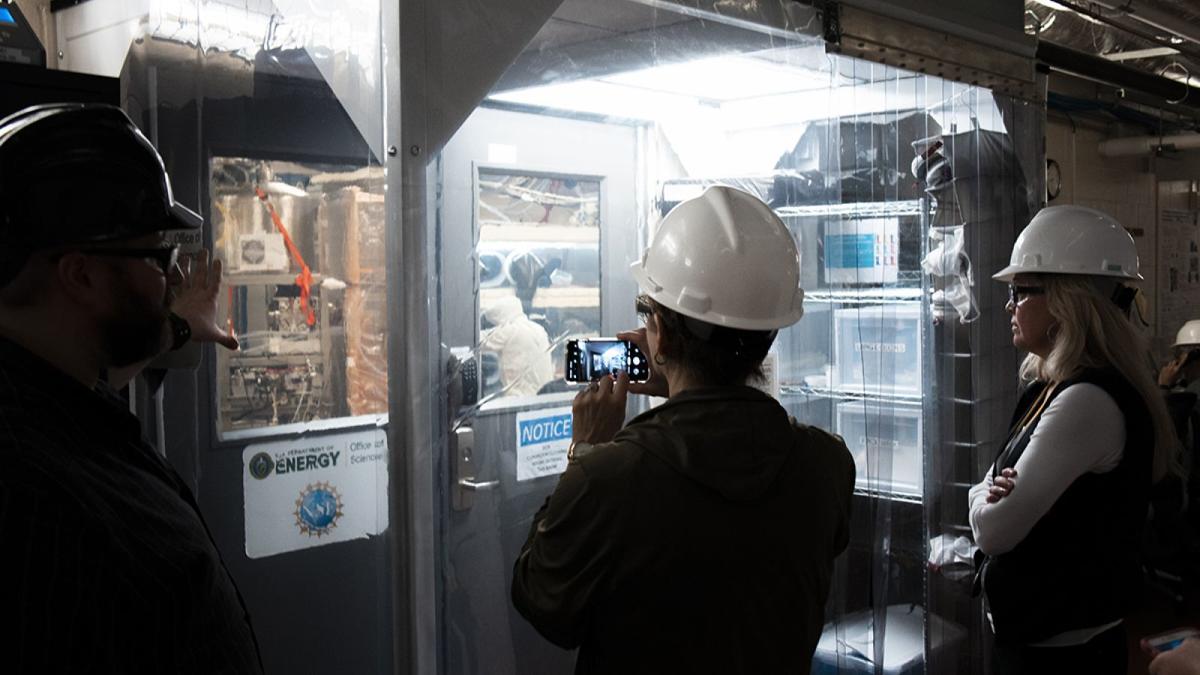 On a visit to the 4850 Level, Dr. Mary Caton-Rosser, professor at Black Hills State University, photographs researchers inside the Majorana Demonstrator cleanroom.

In the past hour, the #science hashtag was used in 300 Twitter posts. Science podcasts have been growing exponentially since 2010, broadcasting conversations about artificial intelligence, biodiversity, particle physics and increasingly niche scientific topics.

Hundreds of articles are being published by laboratories and journalists about a myriad of experiments, some of which have yet to begin taking data.

How does this barrage of science serve a world already bursting with information?

“Awful. It would be awful.”

Given a few additional moments to collect their thoughts, here’s what an educator, two science writers and an astrophysicist had to say about this hypothetical science communication apocalypse:

Science funding would hang by a thread

As the editor of a publication supported by two national laboratories, Jepsen noted that much of the basic research in the United States — slightly more than 40% — is publicly funded.

“Because of this, the research belongs to everybody,” Jepsen said. “If you're funding research and don't know what comes of it, you're being robbed of something you've contributed to.”

“Modern science is generally done at least in part with public funds and for the public good,” said Mark Hanhardt, research support scientist at Sanford Underground Research Facility (Sanford Lab) and Ph.D. candidate studying astrophysics with the CASPAR experiment. “Without public interest, it wouldn't take long for that funding to dry up. The long-term result would then be technological, cultural and economic stagnation and decline.”

While viewing an image of a black hole may not drastically alter your lifestyle, fundamental research has long-term implications as it incrementally adds to our understanding of the universe.

“This has been an era of giving-and-sharing information. Shutting down news on scientific procedures would affect the basic human right to access the information, and even more so, benefit from the outcomes of important research and experiments,” Caton-Rosser said.

“Losing science communication in every form would dramatically lessen our understanding of our place in the universe, but also how we live our daily lives,” said Constance Walter, communications director at Sanford Lab. “From our earliest days, we’ve needed to communicate in order to make healthy choices about what we eat and how we heal. In the broadest terms, we would not have the knowledge we need to make informed, day-to-day decisions.”

Science communicators do more than distill facts from scientific publications. They bring the faces behind the research to the forefront of the story. Today, you can read about the bee whisperer who taught her hive basic mathematics, the blossoming research communities of Latin America, and a researcher whose legacy influenced the field of dark matter.

“You have to use story,” Jepsen said. “If readers can feel the researcher’s emotions — frustration, surprise and even embarrassment — then people can imagine themselves in the shoes of a scientist. That's where they can expand their view of who a scientist is and what science is actually like.”

The next generation of researchers would be scarce

In the absence of such storytelling, young learners might view science as an uninspiring collection of statistics and scatterplots.

“If it weren't for access to cool scientific ideas and the excitement of breaking science news, I wouldn't ever have become a scientist myself,” Hanhardt said. “I would probably be wasting my life somewhere as a pathetic, multi-platinum-album rock star surrounded by millions of fawning fans living a life of opulence and excess. I shudder to think about it.”

“Talking about science is simply learning," Walter said. "Without it, we stop learning, and we start moving backward."

The proposition of science communication ending overnight and the suggested consequences -- dire as they may seem -- highlight the importance of continuing the scientific conversation across platforms. The professionals agreed it’s best not to find out what might happen in such a vacuum.

“I think it’s best we all just keep talking about science,” Walter said.

Constance Walter, communications director at Sanford Lab, addresses a room of students during a science communication panel at the Conference for Undergraduate Women in Physics (CUWiP) at Black Hills State University on Jan. 18.

On a visit to the 4850 Level, Dr. Mary Caton-Rosser, professor at Black Hills State University, photographs researchers inside the Majorana Demonstrator cleanroom.