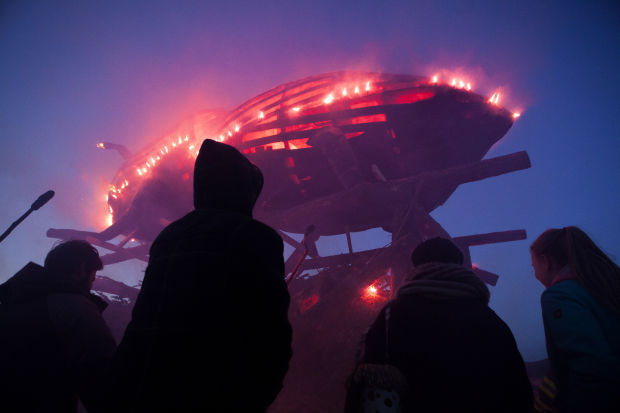 A beetle effigy burns during a past version of the Burning Beetle event in Custer. 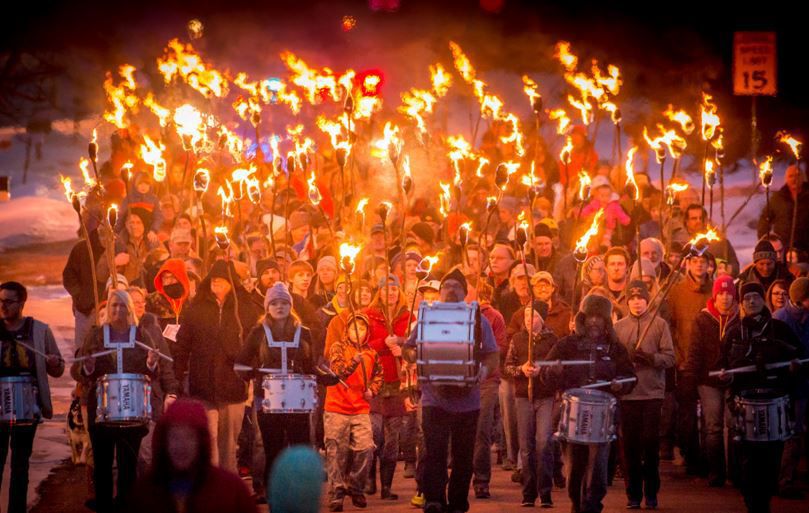 Marchers bearing torches and being led by a drum corps head to the beetle effigy during a previous Burning Beetle event near Custer.

The mountain pine beetle epidemic that once haunted the Black Hills and the party in Custer that was inspired by it have gone in opposite directions in terms of intensity.

This year’s Burning Beetle festival will have the traditional torching of the beetle effigy on Pageant Hill on Jan. 19, followed by the Bug Crawl through several Custer establishments that evening. New for 2019, however, is an artist reception on Jan. 18 at Expressions Gallery and the Spin the Beetle mountain-bike race on the morning of Jan. 19.

The artist’s reception, which will take place from 5-7 p.m., is the result of work that has been done putting together an art installation that will commemorate the infestation of the mountain pine beetle, Friddell said.

“What we’re going to be doing is kind of having an unveiling of what we like to do and introduce the artist that’s involved, and so that’s going to be happening,” he said.

Meanwhile, the Jan. 19 mountain-bike race will have three courses: 9 miles, 16 miles, and 25 miles. The base camp will have activities, games, prizes, beer, chili, music and more. The race will start at 8 a.m. about 1 mile south of Custer.

Cost to enter in the bike race is $25, which includes a Spin the Beetle 2019 T-shirt, food and a pass for the Bug Crawl. Register at bikereg.com/spin-the-beetle, and find the event on Facebook.

Unfortunately for the six-legged inspiration for the celebration, the beetles won’t be around much to join in the expanded festivities. Last April, the two-decade-long beetle epidemic in the Black Hills was declared officially ended by the U.S. Forest Service.

Frank Carroll, another event committee member, said the Burning Beetle evolved out of a need for members of the Custer community to do some art, express themselves and get rid of some of the angst and anger that the epidemic and the fight against it were causing. Inspired by Zozobra — what Carroll called New Mexico’s version of California’s Burning Man — they decided to make a big beetle and burn it.

“And you know what? It worked,” Carroll said, chuckling.

However, even with the end of the epidemic, the Burning Beetle tradition goes on to raise awareness for environmental concerns.

“One of the things it did, it really got the community together to talk about the environment in the Black Hills,” Friddell said. “The initial concern was with the beetles, but now that concern has been shifting to fires in the area.”

The burning of the 20-foot-long beetle replica atop an 8-foot-high stack of firewood and brush will take place at about 5:15 p.m. up Pageant Hill, with fireworks also scheduled.

Friddell said past burnings have drawn about 1,000 people, although last year’s attendance was lower because of a snowstorm. The Bug Crawl can draw several hundred people, he said.

As of Jan. 10, the 10-day forecast for Custer on weather.com had Jan. 19’s temperatures projected to be a high of 33 degrees and a low of 21 degrees, with a 10 percent chance of precipitation.

The Bug Crawl, which runs from 6-8:30 p.m. in downtown Custer, will feature seven venues providing plenty of live music. Musical acts expected to perform, according to the event’s Facebook page, include Allen Kirkham, Josh Williamson, Steve Thorpe, the Black Hills Raptors, Carrie Fischer, Slick, Fire to the Masses, and Jimmy Ray. Go to the Facebook page for specific venues for each performer.

Cost to participate in the Bug Crawl is $10 for a lanyard to get into all the venues, or $5 to attend one venue.

COST: Participation in the march is free; $5 for a torch for the march; $10 for Bug Crawl all-venue access; $25 to participate the Spin the Beetle mountain-bike race, free to watch; by donation for the variety show at Custer High School

A coalition of Black Hills lawmakers, foresters and other interested parties is at odds with the governor’s office about the proper use of app…

A beetle effigy burns during a past version of the Burning Beetle event in Custer.

Marchers bearing torches and being led by a drum corps head to the beetle effigy during a previous Burning Beetle event near Custer.