You have run out of free articles. You can support our newsroom by joining at our lowest rate!
Already a subscriber?
Log in or Activate your account.
Loading&hellp
No thanks, return to homepage.

A volunteer walks Friday between two rows of flags to complete a row during the annual flag raising at the Buffalo Chip to honor and remember those who lost their lives during their service.

Veterans saluted flags they placed in one of 42 rows and remembered their fellow service members at the Buffalo Chip’s Freedom Field.

Volunteers, veterans and community members raised 808 U.S. flags across the field in a 42-by-19 pattern on Friday. The annual event is intended to honor those who served the country and lost their lives in the line of duty.

For Mike Kain, who served in the Army for 30 years, including flying helicopters in Vietnam and piloting tanks in Desert Storm, the flag raising allows him to honor those who passed and serves as a reminder of the friends he served with.

“Our country needs it right now,” he said. “We don’t know any of these people, but here they are coming to put flags up. Why do they do that? Because they love this country and our veterans love this country, and it’s something we all need to get back to. Right, wrong or indifferent, we aren’t perfect, but it’s a heck of a good country, and I love it.”

The raising began about 20 years ago as a way to honor those who died while fighting in the Iraq War, according to the Buffalo Chip’s website. Initially, each flag represented one American life lost with a soldier’s name on each flag. As the count grew, space ran out, so it’s now a tribute to all active and retired soldiers and those who died in the line of duty.

Rod Woodruff, founder and president of the Buffalo Chip, said the flag raising has become a tradition that people look forward to each year.

“It’s something that touches their hearts, and when you touch somebody else’s heart like that, it touches yours,” he said. “If you have to ask me ‘why do you do that,’ I don’t really know how to answer. It’s the American flag and to see this many of them, it’s just about the most beautiful thing in the world.”

Woodruff said people return year after year to help with the event. He said some volunteers have spent four weekends going through the flags to make sure none are frayed or worn.

He said what people will learn if they talk to those who served in serious situations is that they don’t talk much about what they experienced — instead, they learn about it from others or from history.

“It’s the same way in my case, (I had) to find out from looking at records and who knew them in those times,” Woodruff said.

He said he hopes the flag raising continues for many years to come because he wants the Republic to last.

“Doing our share to show patriotism, respect for the flag that people have put together this union, this republic with 50 states right now, it worked pretty well for 200 years and I’d like to see it continue on for a long, long time,” he said.

He said the field and what happens at the Buffalo Chip helps reinforce people’s commitment to their rights and privileges as citizens of the United States.

The field will stay standing through the Sturgis Motorcycle Rally, which will be Aug. 7-16. 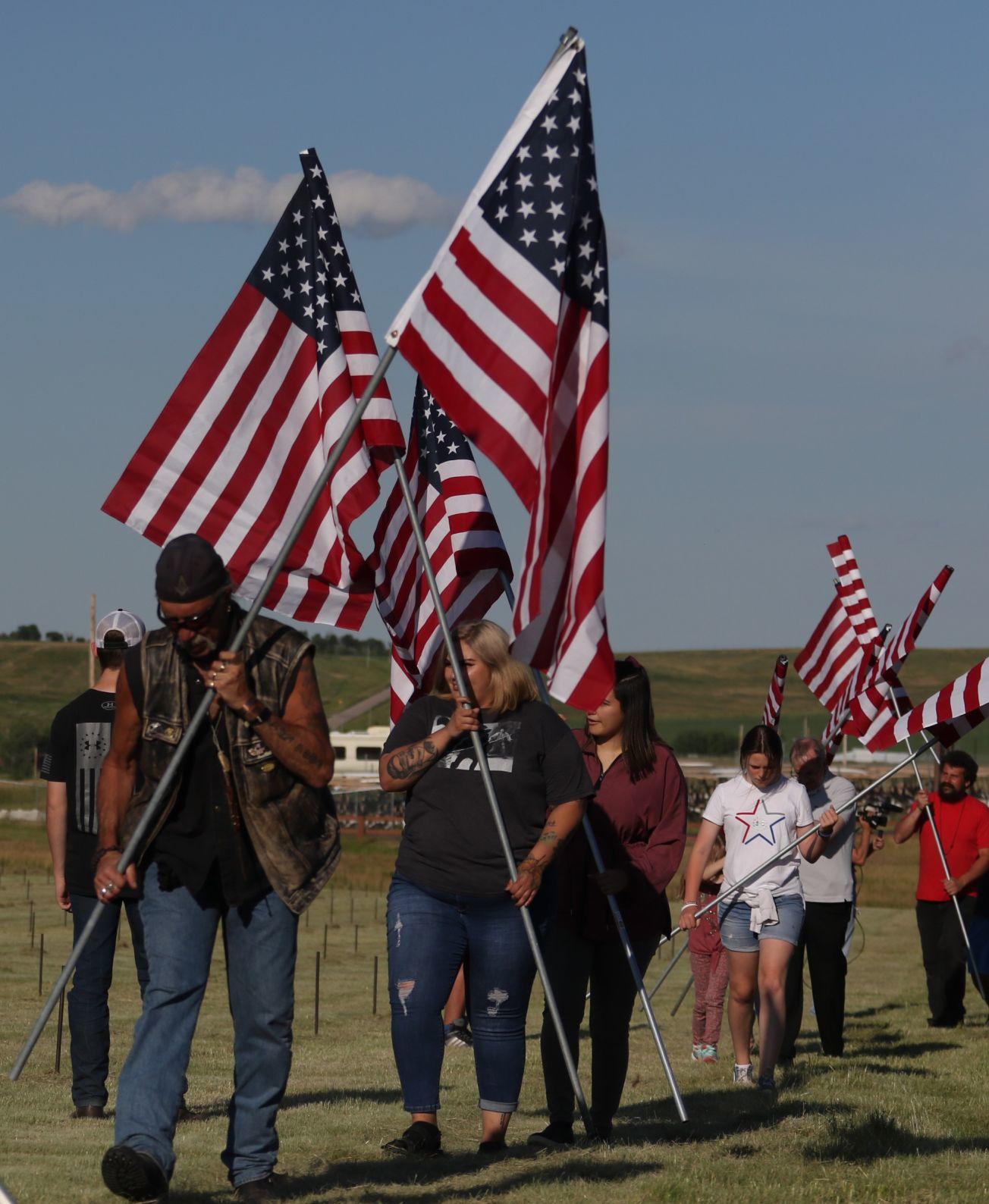 Volunteers carry flags to one of the rows in the Freedom Field June 26 at The Buffalo Chip for the annual flag raising. The field is marked with 808 poles to lift the flags in a 19-by-42 formation.

Drivers in South Dakota who use their cellphones can be pulled over and ticketed purely for that offense starting Wednesday.

A new state law taking effect July 1 makes it a Class 2 misdemeanor to use a cellphone while driving except in an emergency or to use a GPS app or to read or enter a phone number. Drivers who talk on the phone will need to either use a hands-free model or hold the phone up to their ear. The offense carries a $122.50 fine.

According to the state Department of Public Safety, there were 827 crashes in South Dakota last year where distracted driving with cellphones and other electronic devices was a contributing factor.

The Federal Courthouse in Rapid City.

A former VFW leader is accused of sexually exploiting a child. The new charge comes after he was accused of attempting to meet a girl — really a fake child created by an undercover agent — for sex.

Adam Swift, 30, was indicted earlier this month on two charges of sexually exploiting a minor between September 2017 and September 2018 in Box Elder.

In both charges, Swift is accused of making a minor engage in sexual conduct in order to take photos or videos of the act and share it. It’s unclear if the charges relate to one or two children.

Swift is the former commander of VFW Post 1273 in downtown Rapid City and the former judge advocate for the South Dakota VFW. The state and national VFW removed Swift's membership after an investigation into the allegations, said South Dakota VFW Commander Cody Mangold.

Swift is also charged with attempting to entice a minor for sexual activity via the internet in March 2020. He’s accused of trying to meet up with a five-year-old girl — really a fake child created by an undercover Homeland Security agent — to have sex with her and a real minor.

Swift came under investigation after he contacted the undercover FBI agent on the Kik messaging app in February, according to an affidavit signed by Brent Gromer, supervisor of the Internet Crimes Against Children (ICAC) unit in South Dakota.

Swift allegedly said he was sexually active with a 4- and 7-year-old boy and sent the agent videos of a man sexually abusing a child.

The New York-based agent contacted the FBI in Rapid City who asked ICAC to continue the investigation, the affidavit says. A Homeland Security agent then began messaging Swift on Kik, posing as a woman who sexually abuses her five-year-old daughter.

Swift allegedly told the second agent that he wanted to arrange a “swap” where he would sexually abuse the five-year-old and bring a child for the woman.

The agent met Swift at his workplace on March 24 to discuss plans. Instead, the agent had Swift arrested.

Swift let agents seize his cellphone and laptop, the affidavit says. He allegedly admitted to Gromer that it was him chatting with the agents but said he had never really planned to have sex with the five-year-old and that he hadn’t sexually abused one of the children he had mentioned to the agents.

Swift, who has pleaded not guilty to all charges, is detained at the Pennington County Jail. He will go to trial on Sept. 22 unless he reaches a plea deal by Sept. 4.

Update: This story has been updated with a comment from the current commander of the South Dakota VFW